During this year’s Gallery Weekend in Berlin, one could again observe how the art world is structurally getting closer and closer to the conditions prevailing in the world of fashion – plenty of vip limousines were employed, as if to illustrate the entrance of the celebrity principle into the field of contemporary art. The occasionally strongly differentiated and hierarchical invitation policies also called to mind the seating arrangements at a prêt-à-porter show. Equally characteristic of the smooth transitions between the customs of the fashion world and the art field was the opening of a branch of the exclusive London Soho Club in the former Jewish department store Wertheim on Torstraße, including a spa and a swimming pool on the roof. Thus, it only appeared logical that the opening of the new club coincided with a reception for Damien Hirst and Michael Joo. In the streets of Berlin there were throngs of sophisticatedly styled people on their way to numerous openings, dinners and parties. The boutique Apartment also sought to seize the opportunity and gave a reception for the fashion designer Rick Owens (organized by Angelika Taschen), who didn’t personally appear, however, but was represented by his furniture. In view of the outfits of those invited to the official dinner of the Gallery Weekend at the Bode-Museum, it sometimes felt as if one were at a fashion show afterparty. The annual gala of the “Costume Institute” at New York’s Metropolitan Museum seemed just a stone’s throw away.

Despite all these observations, this issue of Texte zur Kunst is titled “Fashion for All”. In contrast to the issue we conceived on the theme in December 2004, the contributions are this time less about examining the relations of affinity between the fashion industry and the field of art; instead, the focus is on the question of the extent to which the fashion world has indeed “democratized” itself in the past years, for there are voices proclaiming a turn of an era in this respect. Where exclusivity was once the rule, where images of models defined the ideal of beauty, and the power of designers counted as incontestable, it is now – not least in the times of a continuing crisis – the much-read fashion blogs, for example, that, apparently independent of the old authorities of fashion critique, proclaim and circulate the new trends “from the street”, allegedly making stylists and model agencies superfluous and defining looks beyond the dictate of the big fashion houses or corporations. The interviews and essays in this issue seek to critically assess this state of affairs in a historical perspective.

Fashion is certainly a social principle that directly intervenes in our life-worlds. Its sphere of influence has increased in the past years not only because it is able to model our bodies and shape them according to its ideas, but also because it can effect a change of mentalities. Accordingly, the sociologist Frédéric Monneyron has shown that it is fashion that anticipates social changes and not vice versa. Yet he simultaneously argues against the current talk of a democratization of fashion, for designers and classical fashion magazines are needed to transform the “look of the street” into trends compatible with the masses (see his essay in this issue). Both the conversation between Stefano Pilati and Merlin Carpenter and Monika -Titton’s interview with aforementioned Rick Owens examine the present-day role of the couturier against this background.

The fundamental concern of this issue is to grasp fashion as a technique of governmentality that has an actual impact on life and constitutes a pivotal mode of identity formation – we create our individualities not least qua our appearance in regard to fashion (see the contributions of Mahret Kupka and Kim Gordon). In the past years there has been a tendency in fashion theory to underscore this individualizing effect of fashion, if not – and that’s our proposition – to exaggerate it. Precisely the fashion blogs, praised as the spearhead of democratization, reveal the contrary upon closer examination, namely, that the authority of fashion designers is being reinforced by them. Blogs are a further symptom of the fashion industry’s desire to integrate the consumer and his/her habits in a stronger way (see the essay by Monica Titton). The more a new era of authenticity is celebrated under the banner of democratization, the greater the blindness toward its evidently staged aspects. Not only the street style photography of the fashion blogs stands for the proclamation of an allegedly authentic and equally individual style. At the beginning of the year, the magazine Brigitte, by dispensing with models, also sought to help assert the “true beauty” of lively women against the dictate of the fashion industry. However, this evocation of liveliness is even more perfidious than the old repressive system (see the contribution by Isabelle Graw), which in its ideality offered scopes for action. Hence, fashion’s attempt to absorb life always already reveals a biopolitical subtext. 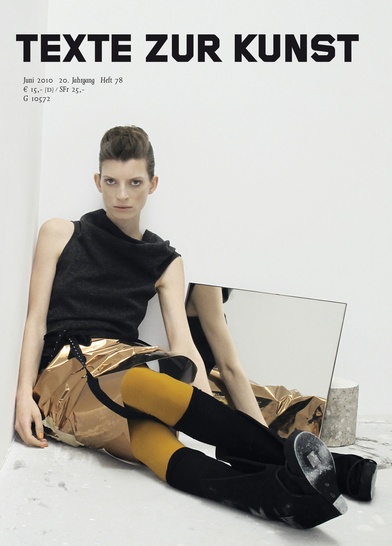