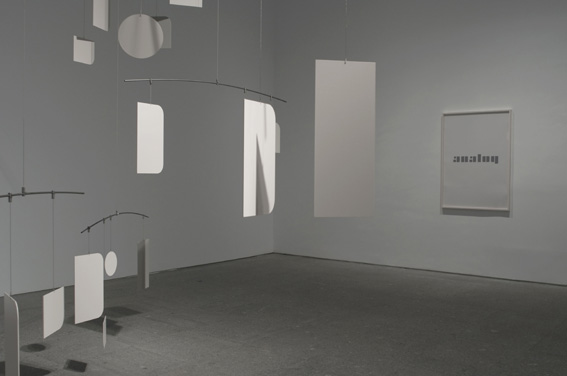 In the summer of 1990, Dorit Margreiter attended a symposium at Grazer Kunstverein entitled “What Is Social History?” [1] . The issues addressed at the event, especially the focus in art on social history and the translation of theoretical discourse (for example on modernity, migration, and feminism) into three-dimensional arrangements, were fundamental to Margreiter´s own orientation and future praxis as an artist. It is no wonder, then, that her solo show from January to April 2011 at the Museo Nacional Centro de Arte Reina Sofía in Madrid curated by Lynne Cooke impressively demonstrated this interest in the societal interrelatedness of art and media culture.

For the extensive exhibition, which placed a selection of (film) installations, objects, videos and photographs from the past decade in relation to one another, the artist chose the methodical title “Description”, which instead of offering a way into the show’s theme and content in a conventional manner, prefaced the show with an artistic strategy as both position and motif.

Margreiter took a similar approach when invited to represent Austria at the 53rd Venice Biennale in 2009, for which she produced „Pavilion" (2009), a film that dramatizes the core of the invitation – to show work in the pavilion [2] . The unhurried shots in black and white explore the architecture, which was designed in 1934 by Austrian architect Josef Hoffmann for the Giardini as a vision of an ideal exhibition space for painting and sculpture and of which Beatriz Colomina has written that the impact of the architecture as a (photographic) image was already considered in the design [3] . Here, as in earlier film-based installations, including „10104 Angelo View Drive" (2004) and „zentrum" (2006) — both also on show at the Reina Sofía — Margreiter uses the transposition of architecture into film as a way of introducing an additional dimension via the “plot” to suggest how our experience of space (in particular the pavilion as a historical monument in Venice and a temporary space for displays of national belonging) is shaped by notions anchored in media culture and social history. Into the scenes documenting the architecture walk two female performers who are obviously getting ready for their act. They present the moment of preparation usually hidden from the audience, supplementing the familiar – the experience of the empty space as a stage set or backdrop to the works – with a third option, in which the architecture becomes a stage for a queer-burlesque performance. In formal terms, the 35-mm film installation also materializes a definition of sculpture that has changed since the early 1930s, including its impact on our understanding of what an exhibition is, as well as artistic production in the broader sense. The spatial extension of the work into the Reina Sofía leads to an altered relationship between the pictorial space and the space of the viewer, emphasizing both the performative, stage-like qualities of the pavilion and the model character of „Pavilion" as a work which, as a documentary study, strives to render visible the symbolic function of representation in its social effectiveness. In the room leading to the projection space, Margreiter underpins this effect by combining a model of the installation in Hoffmann’s pavilion with a selection of design sketches for everyday objects – including a shaving mirror, a toothpick holder and a powder compact – from Hoffmann’s estate. As a two-part installation, a link both real and symbolic is established with the objects used in the film which, like Hoffmann’s drawings, convey a provisional quality, but one whose usage is anchored in the field of theatre and performance and in the material vocabulary of minimalist spatial interventions, creating a proximity and exchange between display and design, everyday world and exhibition space.

„Poverty Housing. Americus, Georgia" (2008), the second 35-mm film installation in the show, also addresses the social dimension of architecture. The footage for this joint project with Rebecca Baron, who also worked as Margreiter’s camerawoman on „10104 Angelo View Drive" (2004) [4] , was shot at a theme park in Americus, Georgia, where the undenominational Christian aid organization Habitat for Humanity International built a life-size model of a slum in 2003 with the aim of raising money for its social housing projects. The buildings are based on photographs and video images of slums in Asia, Africa and Latin America that were chosen as exemplary models to create a walk-in tableau vivant to represent “poverty” and appeal to us, “as a picture”, for help. In an interview with The New York Times, Millard Fuller, Habitat’s president, said that the greatest challenge was to create a real counterpart to the media depiction of “poverty”: “We’d say, ‘You’re making it look too nice,’ […] ‘Look at the photo again.’” [5]

The approach taken by Margreiter and Baron works not via what is staged, the obvious themes of poverty or charity, but via the combination of two narrative structures from different genres; in the inner space of the film installation, we see a series of single frames of the theme park, alternating between static shots of interiors shown for thirty seconds and exterior views shown for a minute. In formal terms, this procedure quotes the establishing shot – the opening sequence in TV series that links the action to a real world location (hospital, Baltimore, Melrose Place, etc.) – while in aesthetic terms, it alludes to the tradition in documentary photography of studies such as the report on the plight of America’s farmers during the New Deal commissioned by the Farm Security Administration and carried out by Walker Evans and Dorothea Lange.

The documentary representation of a fictitious construction, which itself is intended to operate “documentarily”, is also translated by Margreiter and Baron into the layout of the film installation, placing a lit white area containing the 35-mm projector in front of the darkened projection space. In „Poverty Housing. Americus, Georgia", argues art historian Juli Carson [6], the gap between a thing and its representation described by Walter Benjamin in “The Work of Art in the Age of Mechanical Reproduction”, between “a far away place and the place where you are”, is closed. “In reality, we are the picture because what we are peeping at is simultaneously generated from within us. And it is here that the gap between myself and the photographed subject closes—not in a comforting way, as Benjamin would have it, but in a discomforting way.” This active involvement in creating the (collective) “picture” is often staged by Margreiter in her (film) installations via the media-reflexive and gender-analytical activation or reactivation of locations: either directly via the intervention of the performers in Pavilion and „10104 Angelo View Drive", or by the reanimation of a piece of neon signage with the help of a pocket torch in „zentrum" (2004). This discursive portrayal of representation as an inhabited and inhabitable space [7] extends to the hanging and positioning of works in relation to one another. Especially in the middle section of the exhibition, the works create a space that not only stages the position of the viewer as something preconceived “in the picture”, but also makes it possible to experience the repercussions of media constructions on (art) reception. The modular architecture of the John Lautner House, portrayed in the photographs included in „10104 Angelo View Drive", enters into a relationship with „Event Horizon" (2003), a stage-set-like reconstruction of Rem Koolhaas’s wall designs for the Guggenheim Hermitage Las Vegas, guiding the viewer’s gaze on via the picture of the empty „Paramount Studio" (2002) to „Case Study #22" (2001), the only photograph in which Dorit Margreiter herself appears together with the owner of the Pierre Koenig House to “re-enact” Julius Shulman’s iconic nocturnal shot for Harper’s Bazaar.

In the exhibition architecture, too, Margreiter and Cooke establish a dialog between works and spaces: depending on where the works are positioned, rooms are shortened or cut off by additional structures, and in spite of the many projections, the spaces have at least some daylight so that the dichotomy between inside and out, between permanent and temporary structures, becomes less rigid. By means of this conceptual involvement of the museum space in its real-fictional quality, the artist emphasizes the interrelatedness of institution, artistic production and exhibition – a theme reiterated in a new series of mobiles shown for the first time at the Reina Sofía. The point of departure for the four suspended objects is Margreiter’s longstanding interest in typography, in particular, the “Brühlzentrum” neon typeface from Leipzig, which she has used for a series of works since 2004. Among other things, she updated the design, which dates from the 1960s but whose concept recalls the Bauhaus of the 1920s, and used it as the basis for an alphabet on which the mobiles are based. In each case, the individual elements form a name – Lynne, Juli, Julia and Barbara – in reference to the institutions and their directors and curators who had already produced parts of „zentrum". But the “letters” are abstracted to such a degree that the “word” becomes “architecture”, a surface for projections, without dissolving into pure form. Placed at the centre of their respective rooms, the mobiles, recalling sculptures by Alexander Calder and László Moholy-Nagy, open up a further spatial dimension. They deliberately get in the way – especially „zentrum (lynne)" at the entrance to the show, while simultaneously introducing a second spatiotemporal continuum into the exhibition alongside the film installations, offering an experience of the intended permeability between the space occupied by the artworks and that occupied by the viewer.

Following on from “Description”, Margreiter showed the fifth mobile in the series, „zentrum (sabine)" (2011), at Krobath in Berlin, combined with a vitrine containing the press folder from the above-mentioned symposium “What Is Social History?”. As in „10104 Angelo View Drive", the credits here form not only part of the picture, but also an element of concrete architecture in the viewing space.