This issue is dedicated to the collector. Since the early nineteenth century, at the latest, bourgeois collectors and collector couples have belonged to the most prominent protagonists of the art business. Thanks to their financial means and personal passion, they have been and still are engaged in promoting artists and thus securing their livelihood; but they can equally act in support of projects and initiatives, magazines and publishing houses, or enrich public institutions and exhibitions with their loans and gifts. Even if art history often concentrates on the artists themselves, the development of modern and contemporary art is inconceivable without the commitment of collectors, something that frequently takes place in the background. Today, as well, the existence of a broad range of artistic positions in the art world is due to collectors’ philanthropic efforts. Yet in the past three decades, discernible changes in the manner and actions of a certain group of collectors have emerged; a shift to which this issue draws attention.

What characterizes this development foremost is the strong focus placed on the collector’s personality. This appears to be a phenomenon where merely the function of collecting as good publicity is at the fore. While in the upper classes, collecting art has long been regarded as a charitable virtue of patronage, a new generation of collectors is now utilizing its art possessions in a targeted way as a means to assert its own power and economic interests, as Steffen Zillig argues in his article. While collectors were previously hardly known to a broader public, today some of them actively stage their activities in the media and seek to attain the status of a celebrity, a change that – as Zillig describes – is often spurred on in the name of a new bourgeoisie, albeit one which paradoxically purports to be decidedly anti-bourgeois. With the expansion of the Western art market, particularly to the boom nations in Eastern Europe, Asia and the Arab world, a new, highly solvent class of collectors has established itself. In his essay, Niklas Maak shows how this group’s central players expand their influence beyond the market to the international exhibition circuit and thus change its character. Using this year’s Venice Biennale as a starting point, he investigates how members of this group are appropriating a hitherto rather permeable system and increasingly regulating access to it.

But what is the value of the much-vaunted "love of art" and in what relation does it stand to other motives on which collecting is based? To what extent can one infer a certain type of collector from the motives and kinds of collecting? Based on sociological models, Ulf Wuggenig has drawn up a typology of the collector. Using empirical data, he retraces how collectors in the field of art are perceived, how they perceive themselves and from which professional contexts they come. He draws the conclusion that art is increasingly collected by an economic elite, for whom it is both an investment and a lifestyle. Andrea Fraser argues in a similar vein. Her essay outlines the connections between rising prices on the art market and the increasing discrepancy between rich and poor. But if every art market boom comes at the price of increased income inequality, then the question arises as to how this dramatic development could be countered.

The massive accumulation of private money as a result of financial speculation is accompanied by budget cuts in the cultural sector. For many museums, cooperative projects with private collections often appear to be the only possibility to present contemporary art that they can no longer afford. Yet for many collectors today, the model of permanently tying their acquisitions to a public institution in the form of loans, gifts, or endowments seems to have lost its relevance. Instead, they prefer to self-confidently found their own, often architecturally striking exhibition venues. Chris Dercon, Udo Kittelmann, Karola Kraus, Christine Macel, Bartomeu Marí, Matthias Mühling, and Bennett Simpson give answers to the question of how directors and curators of European and American museums are responding to this development.

Regarding the topic of collectors, it is often the case that the artists’ perspective is not taken into consideration, while the collectors themselves are frequent conversation partners. To counteract this discrepancy, we invited Candice Breitz, Peggy Buth, Jonathan Monk, and Andreas Siekmann to a roundtable to discuss their relationship to collectors and also the question of why collectors are currently attracting so much public attention.

In a time in which the survival of cultural institutions increasingly depends on private initiatives, we find it imperative to critically reflect on the altered role of the collector in the way it relates to society. In our view, a polity with a democratic self-understanding cannot allow itself to leave the promotion of a means that forges cultural identity, such as art, solely to private interests. On the other hand, with issue 83 of Texte zur Kunst we hope to present perspectives that open up possible positioning alternatives for the private commitment to art. 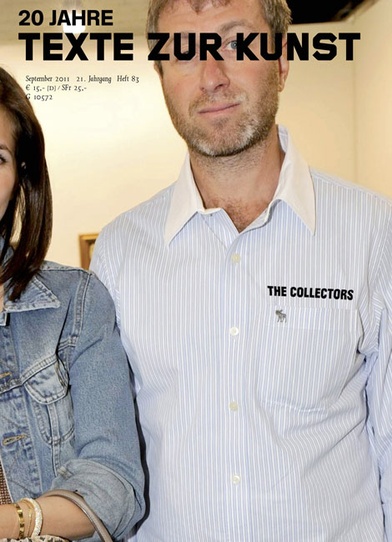