The December issue of Texte zur Kunst examines processes of value-formation in the art world and beyond. We pursue the question of which factors and players are involved in value-formation, but in doing so we are less interested in the motivations behind individual actions than in the specific structure of the mechanisms effecting value-formation. We understand value as an accumulation of human labor in an (artistic) object, although not every object containing human labor is, of course, experienced as valuable. In this sense, value can also be an attribution of artistic relevance, which implies clearly distinguishing it from the concept of monetary value: Value is not the same as price. In each of the various segments of the art world – the market, the exhibition circuit, academic studies, critique – specific criteria for value-formation have evolved.

Based on Karl Marx’s theory of labor value, Isabelle Graw examines the extent to which works of art reveal structural similarities and differences to commodity value. She proposes that the artwork is a special case of the commodity – in contrast to other goods, traces of human labor are often clearly visible in it, thus always referring to its creator. Through this alleged presence of the absent artist, the artwork mutates into the better commodity. Yet in one of her twelve theses, Graw states that art as a commodity traditionally also caters to the desire for grasping an object as being inspirited, animated, and lively, something which has grown even more urgent in the age of biopolitics, so that producer and beholder are equally drawn into the process of value-formation.Diedrich Diederichsen’s starting point is the factor of time as a value-forming constant. He argues that the value of an artwork is determined according to the time spent in producing it, but also that it is the time of all participants in the art world that determines its value: The participation of many people or a certain group in openings, dinners, or parties contributes to lending works of art relevance and therefore to increasing their worth. The French economist André Orléan compares the criteria of valorization in the art world and the world of finance. In both segments, commodities are exchanged, of which no secure statements can be made regarding their value. Viewed in this light, financial evaluation resembles aesthetic evaluation. In both cases, different interpretative proposals compete with each other, and only on the market is it decided which interpretations or values are determined. These values then return from there to the consumers. Since the latter can steer this process only to a limited extent, Orléan grasps value as a force affecting and changing individuals – and not the other way around. How are these theoretical considerations reflected in a concrete way in the art market’s evaluations? Todd Levin, curator and art consultant from New York, responded to our questions on this topic.

Values are constantly generated not only in galleries and auction houses, but also in institutions. Here, the critique of the commodity form has long proven itself as value-forming. To what extent supposedly progressive institutions have compromised themselves today was strikingly revealed this year by the case of the Tensta Konsthall in Stockholm, which Mikkel Bolt Rasmussen sheds light upon in his essay. Maria Lind, the director of the publicly funded institution, cooperated, in the frame of an exhibition, with an auction house that at the same time put up for sale works of artists shown at Tensta. According to Rasmussen, the auction house is owned by the Lundin family, which also runs an oil company that allegedly violated human rights in Sudan and other countries. This is only one example of many showing the mechanisms through which institutions with a critical claim are put under pressure and make dubious compromises when searching for sponsors. The paying party’s cooperation with a position that counts as incorruptible, like that of a theorist or curator, allows it to participate in their promise of authenticity. But what the critical side expects from the cooperation is greater financial leeway for their good cause.

Kerstin Stakemeier and Marina Vishmidt discuss the significance of independence from a Marxist perspective. Once regarded as a free space for artistic production, it is now precisely art’s autonomous status that makes it an ideal asset because it can take on any commodity form, from providing a service to being a luxury article. In all contributions to this issue, the process of value-formation proves to be basically open and incomplete, and value is something that is newly negotiated time and again. This is true of the field of art, but also of all other areas of social interaction.

PS: This my last issue of Texte zur Kunst as editor-in-chief. I have accepted a call to the Kunstmuseum Stuttgart, where I will be engaged as a curator starting December 2012. Yet I will remain associated with the magazine, not least as a member of the advisory board. I would like to thank all the people I have worked with in the past two years, especially publisher Isabelle Graw and the members of the advisory board, my colleagues on the editorial board and the publishing company, the graphic designers, copy editors, translators, authors, artists of the picture spreads and editions, as well as all others whom I could rely on during this time and who have contributed to the success of the issues with their commitment, help, and support. Thank you so much! 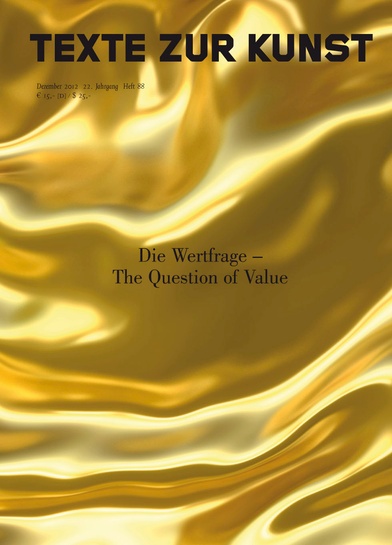