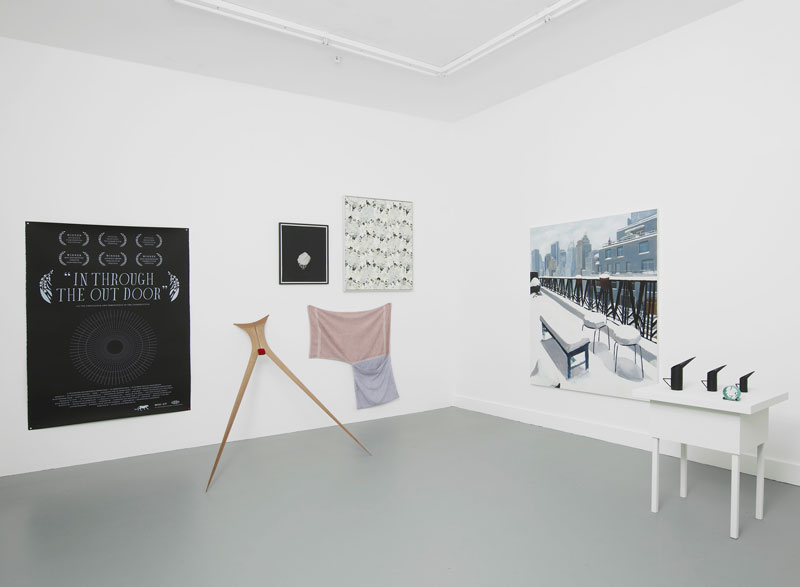 With his exhibition “Notes on Neo-Camp” curator Chris Sharp proposes a revised, “post-homosexual” notion of camp; a notion that has capped all ties to the historical societal struggles in which camp emerged as a key element of a political, queer aesthetic. But what remains once camp has thus been turned into a mere “gay heritage style”? Not much more than well-designed domesticity, and a vague feeling of discontent, argues Ellen Feiss.

In an essay and two subsequent exhibitions, the curator Chris Sharp recently introduced the term “Neo-Camp” as a “post-homosexual” [1] lens for looking at art. This means that the curatorial agenda is to extract “camp” as an isolated aesthetic category from its homosexual associations. Traveling from the Office Baroque Gallery in Antwerp to its latest iteration at Studio Voltaire in London, “Notes on Neo-Camp” is an overt homage to Susan Sontag’s seminal 1964 essay, “Notes on Camp”, which it mines for contemporary currency. In lieu of a diagnosis of the success of the term or its attendant exhibitions, the emergence of “Neo-Camp” inspires more pressing debate. As gay and lesbian politics reach what some would consider apexes of assimilation across the Western democratic world, [2] what will, or what has already, become of “camp” in the midst of the extinction of the homosocial cultures that give – or gave – it life?

While “Notes on Neo-Camp” succeeds in expressing a contemporary condition that seems based on profound social alienation and queer domestic discontent, the notion of a camp that is unmoored from its relationship to the history of struggle around gender and sexuality, “divorced from its political, predominately homosexual, subcultural origins,” [3] is deeply troubling. The exhibition takes great pains to establish Neo-Camp as a quality independent of the maker’s sexuality. While not in disagreement with this precept, camp itself, primarily as a mode of relation, is irrevocably queer; a word that appears not once in the exhibition. As it has been argued in the discipline of Queer studies, “queer” has already inaugurated a shift away from an identity politics that would insist on a gay identity for the artists in this exhibition, and toward an understanding of the term as a critical methodology. While not expecting a queer analysis to become a focal point, in omitting it entirely, “Neo-Camp” is rendered as an international style characterized by a dandy flavor, incapable of encompassing the moments of social critique within the art it supposedly describes. In fact, such a violent break is made with camp’s legacy of dissent that Sharp goes as far as pronouncing it a “gay heritage style” [4] immortalizing its most facile elements while politely burying its forebears, in the way of a patrimony that the term itself would arguably oppose, probably through parody – camp familial crests, and other “heritage” items spring to mind.

Although “Neo-Camp” profoundly lacks a sense of political agency, a latent tension arises from many of the works exhibited – suggesting a discrepancy between the two. Matthew Brannon’s “In Through the Out Door” (2013) a movie poster, which at first has the graphic identity of a tasteful independent film in a thin sans serif typeface, is, upon closer inspection, a series of anal sex innuendos, a graphic of a large black hole at its center. “A bruise: compressed like thought” (2013) by Camilla Wills, a photo collage reminiscent of the Memphis school of the 1980s, is perky yet extremely dark. Four images of women’s legs, clothing pulled back to reveal sizable lesions, is captioned by the phrase, “A feeling of estrangement strong enough to leave a mark.” Both works exemplify the kind of intimation that radiates from the exhibition, explained by Sharp as a return to Victorian sublimation, or the exhausting “ironically self-aware, pseudo-sublimat(ion)” [5] , which seems an attempt to identify in the artworks a rejection of the contemporary impulse for full disclosure. Rather than choosing reticence, as Sharp claims, this loud silence, characterized by vaguely confrontational suggestion, is better understood as exasperation without explicit political purpose.

This feat of the apolitical is in part due to historical oversight. Sharp’s curatorial thesis departs from Sontag’s 1964 essay, written before the AIDS crisis, and materializes directly within the present, bypassing camp’s most insurgent years. While refuge is taken in Sontag’s diagnosis of Camp as “depoliticized – or at least apolitical” [6] the exhibition overlooks the intervening years of ACT UP, the campiest of direct action organizations. Ironically the art critic Douglas Crimp, who has argued that it is precisely its deployment of camp sensibilities that made ACT UP successful as a political campaign, appears in the exhibition via Tom Burr’s Fassbinder Piece (2011) on the cover of the Fassbinder issue of October magazine, in the summer of 1982. The work is a triptych of Fassbinder materials from the year of his death in 1982, situated within a wooden black framework roughly the size of a phone booth. A debauched looking green leather trench coat, an original Kamikaze 1989 film poster and the October issue are placed in symbolic relation to one another, their textual meaning purposefully eclipsed in an exercise of, and rumination on, contemporary memorialization. The October issue, with its distinctive red title font, is among the first visible images as one enters the space, yet its content (and the significance of Crimp’s work in this context, for example) seems to have been vacated to create a mere sign – a practice that appears throughout the exhibition, the complexity of which isn’t sufficiently addressed by the curatorial terminology. The catalogue promises that “Neo-Camp” isn’t intended to be “apolitical” but instead “(recuperated) as an aesthetic strategy, comprised of […] the coded, ambiguous, (and) artificial.” [7] Crimp’s work has attributed to camp simultaneously and inseparably an aesthetic and political force, particularly in relation to convoluted symbolism. He discusses ACT UP’s infamous Silence = Death pink triangle as effective precisely because of its deeply coded and abstract power. [8]

“Neo-Camp” then, describes a depoliticized contemporary camp, one without organized political vision or community. Not lack of politics, but certainly estrangement from action, as Wills’s piece states quite plainly. More specifically, if Neo-Camp is the “complete and total domestication” [9] of camp, the layout of the exhibition suggests the uneasiness with which queer subjectivity enters the confines of the home. Split across two galleries within Studio Voltaire, one initially walks into the first, a grand former chapel where six works are elegantly arranged in relation to Anthea Hamilton’s “Venice Kimono” (2012) at the altar. Further to engaging with these works as expressing undirected frustration, Hamilton’s seemingly authoritative monument to performance, chrome bars in a crucifix form, holds up silk fabric that upon inspection is unraveling softly, pilling at the seams, the back emblazoned with an image of John Travolta’s young face, a cultural emblem of the closet. Paul Lee’s lavender sculptures are like perverted household items; useful everyday objects like a towel and a ­ladder combined into senselessness. The corporeal protrusions of Daniel Sinsel’s “Untitled” (2013) clustered over a frailly executed grid resurrects a critique of the masculinist avant-garde indicative of Eva Hesse. Gallery two, a much smaller room next to the bathroom, is crammed with the rest of the 14 objects in the exhibition, the walls plastered with works from floor to ceiling like an obsessive’s spare bedroom.

According to Douglas Crimp, one particularly motivating political propellant for ACT UP was in demonizing certain public figures, although he ultimately bemoans this practice as limiting in scope, unable to address the structural inequalities that the crisis revealed: “(But) the focus that that gave us; (in saying) so-and-so is a bad guy.” [10] While potentially containing a complex political address, “Notes on Neo-Camp” lacks this urgency. Without a clear focus for its anger, like many subjects of late capital, it expresses an alienation from collective experience and thought. Allison Katz’s painting “Snow on the Terrace, 20th Floor, Central Park West” (2013) demonstrates it best; a work that depicts, with a naïve air, an empty bench on the roof of an apartment building, snow silently building up around it. If the call to the domestic is suspect, even a mode of cultural annihilation, camp has retreated into solitude.