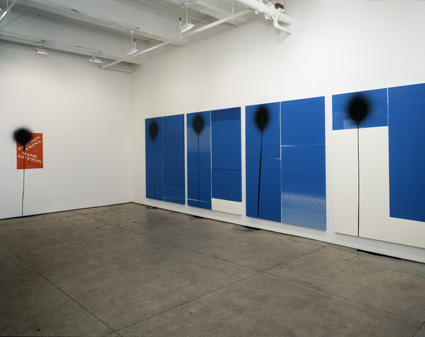 The usual criteria for judging a good collaboration are not unlike those for judging a good marriage: how well the individual collaborators fit together, how they merge into one another, how they illuminate one another. In their many collaborative works, Sophie Taeuber and Hans Arp, for instance, are one prototype for a form of collaboration which approaches the condition of marriage. Their work as a husband-and-wife duo produces an ineffable surplus, exceeding the sum of its parts.

In their recent exhibition at Friedrich Petzel Gallery, however, Wade Guyton and Stephen Prina adopt a very different attitude toward the values and potentials of collaboration. The four collaborative “paintings” in this modest show, all lined up in a row on one side of the gallery, seem at first glance to be rather obvious. Guyton produced a series of his large monochrome inkjets on linen, printed in blue instead of their usual black. The blue is a garish return of the International Klein Blue, slipped out of ethereal “azur” and into a digitized cyan. Divided neatly in half by the printing process, each panel is left in a different state of incompletion, with blocks of raw white linen intervening to great compositional effect.

Enter Prina, with an iteration of the work “PUSH COMES TO LOVE”, created for the first time in 1999. “PUSH COMES TO LOVE” is simply the contents of a black enamel aerosol paint can sprayed onto a vertical surface, in deliberate misapplication of a 1968 statement by Lawrence Weiner, “TWO MINUTES OF SPRAY PAINT DIRECTLY UPON THE FLOOR FROM A STANDARD AEROSOL SPRAY CAN”. Prina aimed his can at the upper left corner of each of Guyton's inkjets, leaving a shiny black aureole which drips down the painting and into a small puddle at the edge of the floor.

Of course, the component associated with each artist—instantly recognizable to anyone aware of either Guyton's or Prina's work—already complicates the idea of a signature gesture or style (Guyton by displacing the happy accidents of facture onto a mechanical glitch, Prina by his perverted citation). But they nevertheless unmistakably represent themselves as a brand. Rather than imbricating their practices, Guyton and Prina contribute a token or emblem of their individual work. They therefore situate themselves in a lineage of “failed”—that is, unsynthetic—collaborations, of which Warhol's and Basquiat's are perhaps the most notorious example (not least because they appeared to be in it for the money).

The daft humor of the collaboration registers formally. Not only are Prina's perfunctory sprays ridiculously confined to one corner of each painting, they plays the figure to Guyton's ground, rehearsing one of the most familiar dichotomies in the history of painting. The spray seems like a punch-line grafted onto the unwitting monochromes; the joke is effortlessly funny because it is devoid of cleverness.

Prina also sprayed “PUSH COMES TO LOVE” onto one copy of the fluorescent orange poster advertising the show, which hovers distractingly on the wall adjacent to the paintings. Available as a free souvenir at the back of the gallery, the poster drives home both the collaboration's theatricality (“The Friedrich Petzel Gallery Presents Paintings By,” the heading reads) and its additive structure (the words “Wade Guyton + Stephen Prina” dominate, like in a handbill for a double feature).

Since both artists are known for their attention to the format of the press release, it is worth noting that the text surrounding the exhibition is a rather peculiar one, both in its omissions and its avowals. The handout consists simply of photos of each work, with Guyton's and Prina's respective contributions titled, described and, indeed, even priced separately (in the interests of decorum, I won't reproduce the prices here, but let it be said that they're far from equal). Only two of the works are for sale, the other two presumably set aside for the artists. The total price of each work for sale is the sum of the prices for each individual contribution, denying the collaborative aspect any additional value.

The loudly-proclaimed price placed on each collaborator's contribution not only prevents the works from being seen as a synthesis, but it flies in the face of the use of collaboration to escape both individual authorship and the capitalist division of labor. It can be read as a subtle ironizing of the vogue for cooperative art practices whose rhetoric of equality has begun to seem avoidant at best and coercive at worst.1 There is no familiar utopianism in the way Guyton and Prina figure collaboration: in the context of a highly commercial show of paintings at a Chelsea gallery, each performs his separation from the other and exacerbates the blockage of communicative exchange.

Nowhere in this collaboration is the unity of the couple adopted as the ideal. And yet, Guyton and Prina's contributions are literally on top of one another. The recent writings by Douglas Crimp on Warhol's films and the queer politics of non-coupling might be helpful in teasing out why Guyton and Prina chose to collaborate the way they did: in a 2009 interview, Crimp said that “we have to begin to imagine possibilities for human relations that are not based on the model of the couple, the two-coming-together-as-one, the you-and-me-against-the-world model.”2 In Warhol's The Closet, to give the example which Crimp discusses in his forthcoming essay “Misfitting Together,” Nico and Randy Bourscheidt are filmed sitting next to each other in a closet, fidgeting in an awkward proximity, close without being intimate or even feigning intimacy.3 Against the telos of the marriage comedy, Crimp sees in this setup a specifically queer refusal to couple, to smooth out social relations into a harmonious synthesis. Is it too much to consider Guyton's and Prina's work together as a model of artistic collaboration which is queer in this way? Their paintings are the deposit of a non-relationship—in which the two artists, nevertheless, coexist, in all their singularity.