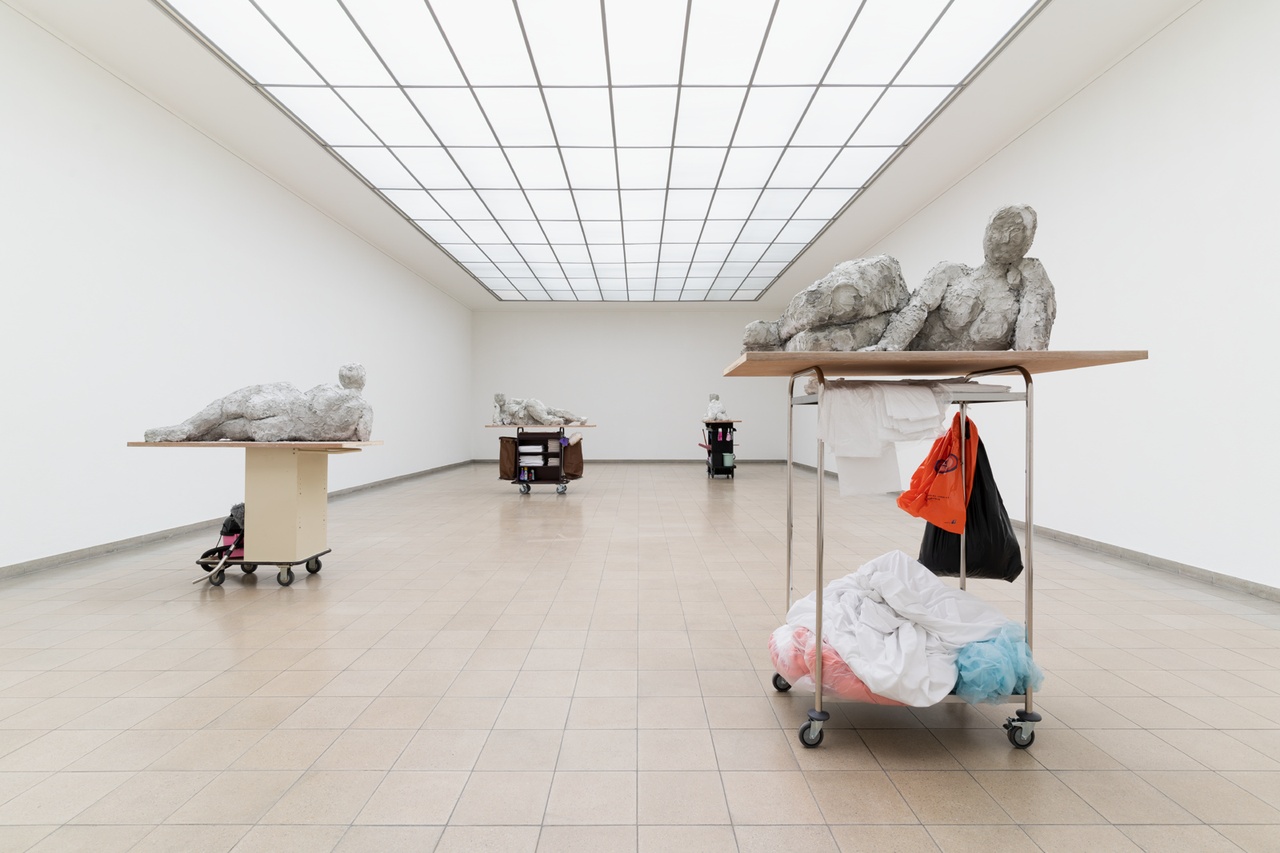 Firmly embedded in art historical tradition, the reclining (female) figure may be read as an antidote to a present characterized by radical change and uncertainty. At the same time, it also appears to embody a state of universal exhaustion. In Nicole Wermers’s current exhibition, “Reclining Fanmail” at Kunsthaus Glarus, the classic pose is contrasted with modern-day utility carts, recalling Mierle Laderman Ukeles’s Manifesto for Maintenance Art (1969) – and with it, issues of class and gender relations within contemporary art. Reviewing Wermers’s recent work through the lens a crisis-laden Western world, the artist Brit Barton traces further associations and possible reference points – from anti-immigration policies over disinfectants all the way down to the pervasive grief of globalism and art world commodification.

Nicole Wermers has always managed to pack so much meaning into so few gestures. It’s often a psychological minefield of projection and desire for a viewer willing to embrace the artist’s minimalist aesthetic and surrealist touches. Her past work has reliably explored an essence of sumptuousness: fur coats, lacquered surfaces, aesthetically pleasing ashtrays, terrazzo, sand, and Thonet-inspired dining chairs – easy and appealing metaphors for a postwar, upper-middle-class consumption. The West German–born, London-based artist has always walked a tightrope of sculptural restraint and material decadence within her work, inducing tension and maybe a little bit of guilt. The commercial value and object power within her sculptures have always captivated an audience into quotidian indulgences that are fraught with predictable capitalist and conceptual concerns. However, in “Reclining Fanmail” – an intentional play on the art historical tradition of reclining females – Wermers opens a new exhibition at Kunsthaus Glarus with an ambitious stride, departing from a practice that was of such a signature style. Through juxtaposing two forms of sculpture, a meditation on labor and leisure ensues alongside an artistic evaluation of covid-era object-based practice.

In the largest room of the pavilion-style mid-century museum in rural Switzerland, four sculptural works come together in a series but exist entirely on their own. The spatial aesthetics of Kunsthaus Glarus are exceptionally considered, allowing the works to fill the naturally lit space without crowding it. Nevertheless, there is so much containment. Although Wermers presents four sculptures, each piece is divided into two parts: On the top halves are near-life-size reclining nude female statues, done in roughly set plaster that was quickly formed lest it dry in the wrong position. They rest on large, flat, sculptor’s work surfaces with the many maker’s marks of an artist’s messy studio. The bottom halves consist of hotel maintenance carts that support the statues and carry a variety of objects that create their own vignettes within the interior shelving. In the room, it is hard not to compare the works, which are so alike and yet so different. The plaster odalisques are all oddly proportioned, but some are finished with more realistic characteristics than others. The first cart viewers encounter when walking into the room holds a statue that is at eye level, if not higher, and positioned in order to directly confront every attendee. Its face is reduced to fundamental linear and smooth contours, a possible ode to Constantin Brâncuși’s Sleeping Muse (1910). For an artist who has always suggested but never before directly used a feminine subject within her work, here, Wermers has offered one literally on a pedestal.

The seamlessness of her well-known sculptural works, like those in the Tate-nominated “Infrastruktur” exhibition from 2015 that examined architectural space defined by a chic mid-century modern design, is intentionally left behind here. If you were to ask me if the four plaster statues were done in an effort toward a pristine essential copy, I would say, without hesitation, absolutely not. This round, unpolished, figurative work is a far cry from the chic, angular, and Duchampian touches of Wermers’s previous style. In “Reclining Fanmail,” there is an adamant aesthetic study of the artist’s hand and the ironic notion of the homemade. There is a quickness to the nudes that is as energetic and lively as a sketchbook drawing, and their texture is reminiscent of the overbearing Alpine granite valley where picturesque Glarus is nestled.

The four maintenance carts vary in style, inherently acknowledging the clear fact that there exists a whole slew of service industries that are required for most buildings to function. There is one cart for handling industrial amounts of laundry, another possibly for catering, and maybe one that is more for luggage, but they are all presented here as the essentials for housekeeping. Brooms, mops, a vacuum, various bottles of bleaches and peroxides, hanging bags, and trash cans are all on display in orderly containment in an effort to maintain this phantom, unidentified hotel. Each has a duty of its own, designed to assist the equally anonymous guest for an undetermined length of stay. Wermers’s conspicuous use of color combinations is employed, reinforcing the unsurprising association that there are many pinks and purples when it comes to commercial cleaning. Even the vacuum, a Hetty Hoover – a nearly identical companion to the Henry Hoover – is decked out in pink with glamorously long eyelashes. But gender doesn’t need to be implied. Common parlance ensures that, whatever word you want to use, a housekeeper, a maid, a domestic worker, or a servant is traditionally and typically a woman relegated to low-wage labor, if she is paid at all.

While Wermers presents the objects without any overt political context or commentary in either the titles or the accompanying text, one could argue that there are still the many microcosms and nuances within Wermers’s “Reclining Fanmail” that have the seductive and anxious qualities well-known from her previous collages and sculptures; you just have to strain to see them. Rather than the imagined upper-class woman’s hanging fur coat in “Infrastruktur,” this time it is about the folds of collapsed linens, molded plastic bottles, canvas bags, and terry cloth towels. The materiality has visibly changed while working with the same propositions from before, only now the implicated but invisible body is more than the idea of a woman but, in all likelihood, also an immigrant. But as we continue to see an ongoing war in Europe, reignited arguments of refugee and immigrant labor amass alongside the pandemic issues that came to the forefront of working women. The conversation can no longer be reduced to gender, but must be an intersectional exchange across class and citizenship following the international crisis of who bears the title of being “essential workers.”

Though they are static sculptures to be circled and surveilled by an audience, the carts are on wheels and designed with efficiency in mind. While they appear to be balanced, they are top-heavy, seemingly rendering the plaster statues as precarious to carry as they are a burden to bear. The works are all simply named Reclining Female #1–4 (2022), leaving the viewer with titles that only reference the sculpture’s top halves as being worthy of mention. The cart sculptures – the bottom halves – are supporting an idea of art or image that speaks to the broader and classic ideal of the European bourgeoisie, i.e., those who would commission or acquire a statue to begin with. Or is it that Wermers has more acutely pointed to a kind of contemporary sculpture, one that is industrially produced and/or sourced secondhand? In their mutual display, the imposed hierarchy of top and bottom creates more than a visual schism but a multi-veiled commentary on artwork of any era: who owns it, shows it, makes it, and maintains it.

The complex curiosity surrounding the sculptures’ meaning or intent brushes up against the background of the xenophobic Brexit environment, with the UK having finalized its departure from the European Union in February 2020, and functions within the foreground of a pandemic present Europe. The works are a departure from Wermers’s previous artistic production, they were created specifically for the Kunsthaus Glarus exhibition space, situated in a region with its own pervasive politics. It is impossible to look at the sculptures and not think of the chaos of the contemporary political strife or hygenic obsessions of the last few years. However, though Wermers might occupy a seemingly political ambiguity, it may point to the broader fact that these sculptures can so easily translate to the pervasive grief of globalism and art world commodification.

Presented here is a quickly produced plaster work that speaks to a seemingly timeless and tired subject matter (the female nude) is prominent, named, and served on a visual platter for all to admire or admonish. Up on a pedestal, it inevitably exists to be compared to its duplicates, for better or worse, objectifying them even further than what is at face value. Moreover, here exists a form that is staid and slapdash, a frozen body held in an uncomfortable position to signify the lapse of the middle class in a changing Western world. All this is held up like Atlas holding the globe, except there is no man in sight supporting the status quo, only the unseen immigrant woman on the move in a fixed position within an institution.

Brit Barton is an artist based in Zurich and Chicago.