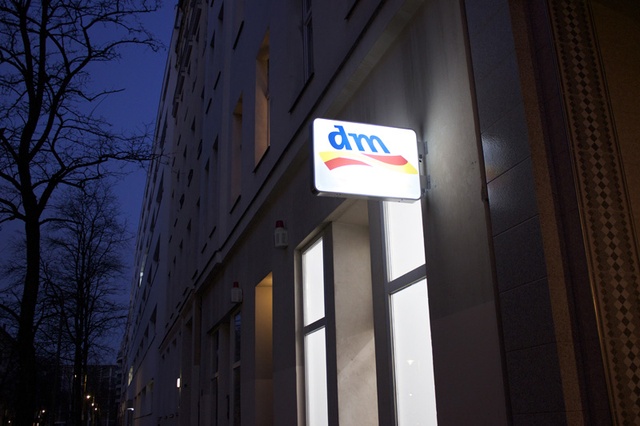 As founder and owner of the dm drugstore chain, German entrepreneur Götz Werner has become a notable national public figure for his social and political ideals. With concepts rooted in Rudolf Steiner’s Anthroposophic spiritualism, he promotes creative freedom, equal opportunity, and a balanced relationship between physical and spiritual wellness. From advocating for unconditional basic income in Germany to encouraging open dialogue within his own corporate hierarchy, his philosophy could seem at odds with the capitalist entrepreneurial spirit of exploitation for maximum profit. Yet Werner clearly believes that wellbeing of both body and society can be pursued within the boundaries of a profit-driven system.

Can health really be manufactured through corporate products and practices, however ethical they are purported to be? In his solo show at Gillmeier Rech in Berlin, the young German artist Max Schmidtlein put this operating logic up for debate with a series of paintings (all works 2015) each incorporating drugstore items bought at dm. Outside the gallery’s storefront, Schmidtlein installed a light-up sign with an ever-so-slightly skewed dm logo, which supposedly attracted excited neighbors to ask whether the chain store was opening shop. (Would they have been so thrilled, one might wonder, were the sign to instead read ‘Rossmann’ or, R.I.P., Schlecker – companies not likewise known for such clean and happy corporate agendas?) Inside the space, eight semi-figurative paintings on black cotton and silk formed a somewhat desolate, somewhat grotesque, and vaguely comical portrait of the human consumption and expulsion of artificial products. 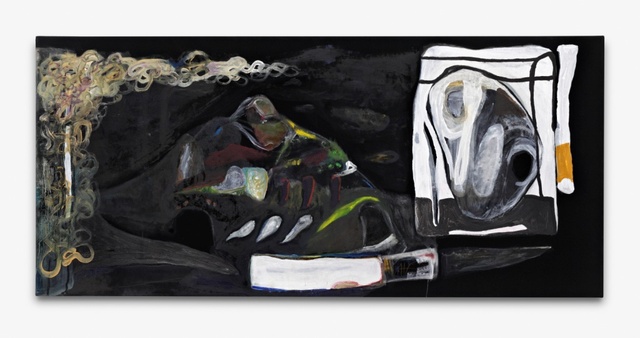 With store-bought products such as pills and shampoo mashed into their surfaces, the works – never mind the intended alimentary purposes of these materials – depart from the slick visual language of said products’ branding, suggesting instead the physical effects of substance use and abuse. Off-kilter and unsettled, Schmidtlein’s paintings repeatedly reference forms of ingestion – what ointments and mouthwashes and cigarettes actually do to your cells and your insides despite whatever the packaging may promise. The question is whether the physically and morally hygienic lifestyle that dm sells so well is the cause or the cure or perhaps even a pharmakon for the psychopathologies of capitalism.

Most of the paintings (six of which were hung horizontally), are named after brands dm sells. Take the work “Neutrogena,” for example, its dark cavities resembling internal organs afloat in a semi-transparent white human-like body, rendered in cracking paint caked with wax. “Profissimo,” in contrast, is more definitively figurative, bookended with a pack of cigarettes on one end of the canvas and curling brown smoke on the other. “Ultra Sensitive” likewise features decipherable elements (here, wine glass silhouettes) embedded in white curly smoke, with what could be read as a grimacing red face in the center. 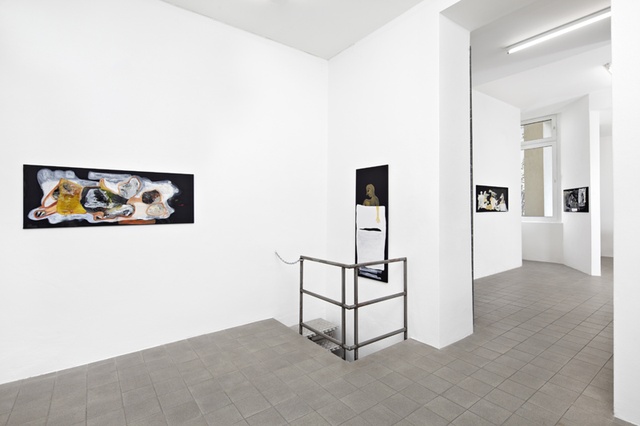 The quieter “Balea,” meanwhile, displayed prominently in the front of the space, was the work in which Schmidtlein most clearly showed off his painterly tendencies. It’s a sparse yet complex composition, with two sets of white marks resembling either skeletal hands or lines of crushed pills, between which intestines unfurl and/or viscous fluids pool. “Balea” is so compelling a painting that I initially forgot to check what unorthodox materials it contained (bath additives, various pills, cream, lacquer). Yet due to the very deftness of its composition, it almost felt out of place in a show that, for the most part, resisted fulfilling pleasant viewing expectations.

In “Balea” Schmidtlein demonstrates a painterly talent – in the straightforward meaning of mastery of craft – that suggests he need not rely on any neat conceptual premise (like drugstore materials) to set himself apart from his elders or contemporaries. On the contrary: perhaps the most provocative association triggered by Schmidtlein’s usage of the apotheke is his meta-observation that painting itself might be in need of a cure for its perpetual self-subversion. Such a fix would need not necessarily be a new method of undermining painting as such; nor would it need be the type of “care taking” (curo, curare…) done by curators; nor would it have to be the prepackaged (and now exhausted) “Zombie Formalist” brand obeying a set of hand-me-down compositional rules implying a critical position that isn’t there (a cheap makeover in lieu of a remedy). If there were a cure, it would rather be an unabashed engagement with materials and modes of representation – something Schmidtlein is quite good at, with or without shampoo.

Elvia Wilk is a writer and editor based in Berlin.