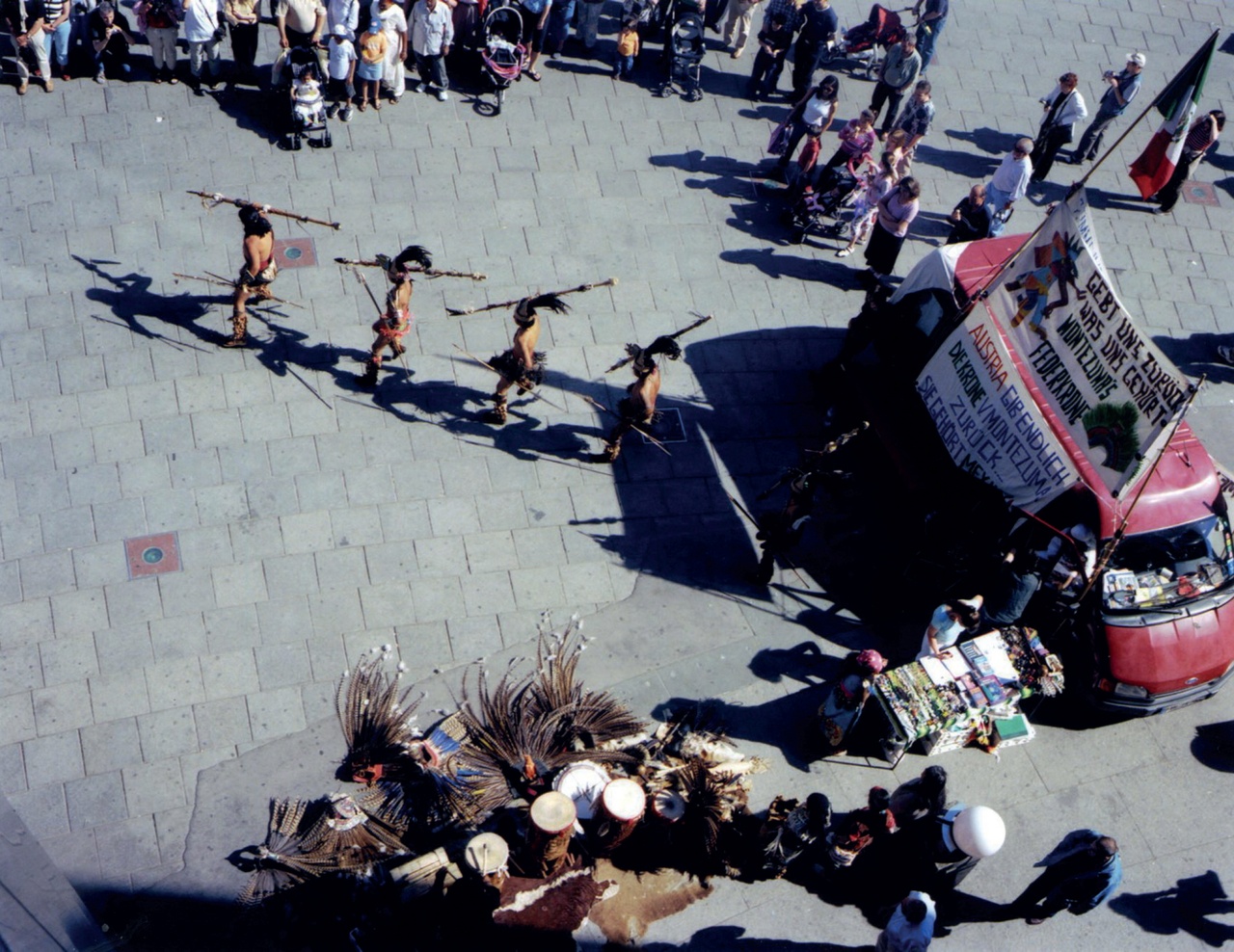 Vienna’s Weltmuseum contains ethnographical objects from Asia, Africa, Oceania, and the Americas. The museum’s relatively new euphemistic name obscures what its location cannot: housed in a wing of the Hofburg Imperial Palace, the collections are the spoils of centuries of colonial plunder. One object in particular – a headdress belonging to an Aztec emperor – has been the focus of a rigorous campaign for restitution for more than thirty years initiated and sustained by Mexican activist Xokonoschtletl Gómora. As artist and art historian Khadija von Zinnenburg Carroll narrates here, a recent intervention at the museum brought renewed attention to the dispute and revealed the Austrian government’s recalcitrance in the matter.

Recently, an artistic intervention in the Weltmuseum in Vienna converged with the political stage when Social Democratic party representative Petra Bayr brought a motion regarding the repatriation of the infamous Aztec crown in the museum’s collection to the Austrian parliament. It’s an object whose significance has often shifted between art and political representation. Activists, led by Xokonoschtletl Gómora, have drawn on the long-running struggles for ownership of this crown, creating an intervention that injects this object’s fraught history into the museum’s audio guides.

The museum intervention had to be savvy about legalities: the instigator Sebastian Arrechedera and his collaborators were careful not to break any major laws. For instance, if they had replaced the headsets then they technically would have stolen museum property. Instead, they did the museal equivalent of what artist Marisa Jahn has called “shopdropping,” in which objects are dropped into the shop rather than lifted in an act of “shoplifting.” Inserting new audio data into the headsets in the museum’s collection, they gave a gift to the museum. It would be a gift that keeps on giving if the museum keeps their audio guide in circulation.

The cleverness of this action, which Arrechedera titled Truth Audio Guide, was not lost on the director of the Weltmuseum, Jonathan Fine, who is a US lawyer-turned-curator. “Great,” he said to me, “people need to talk about what is going on, and if we aren’t doing that then we [museums] are just mausoleums of dead objects that people here don’t want and people elsewhere might want.” I asked Arrechedera what he thought of Fine’s response to his action, and he said he found it appropriate, because “we did it in a harmless way.” The museum’s list of patrons includes the “Austrian taxpayers” along with Mexican billionaire Carlos Slim’s Telekom Austria – which sponsors free entry to the museum for all Mexicans. With Arrechedera’s intervention, visitors to the museum could hear the voice of Xokonoschtletl, a descendent of the Aztecs and inheritor of knowledge of the crown. People who use the audio guides presumably want to learn more about the collection, and these guides often function as the first port of call for those uncertain of what they are looking at. Conditioned to listening to the authority of the voice in the headset, museum visitors are unlikely to question the history of contested objects if the uncertainty of these histories isn’t addressed in the audio guides. 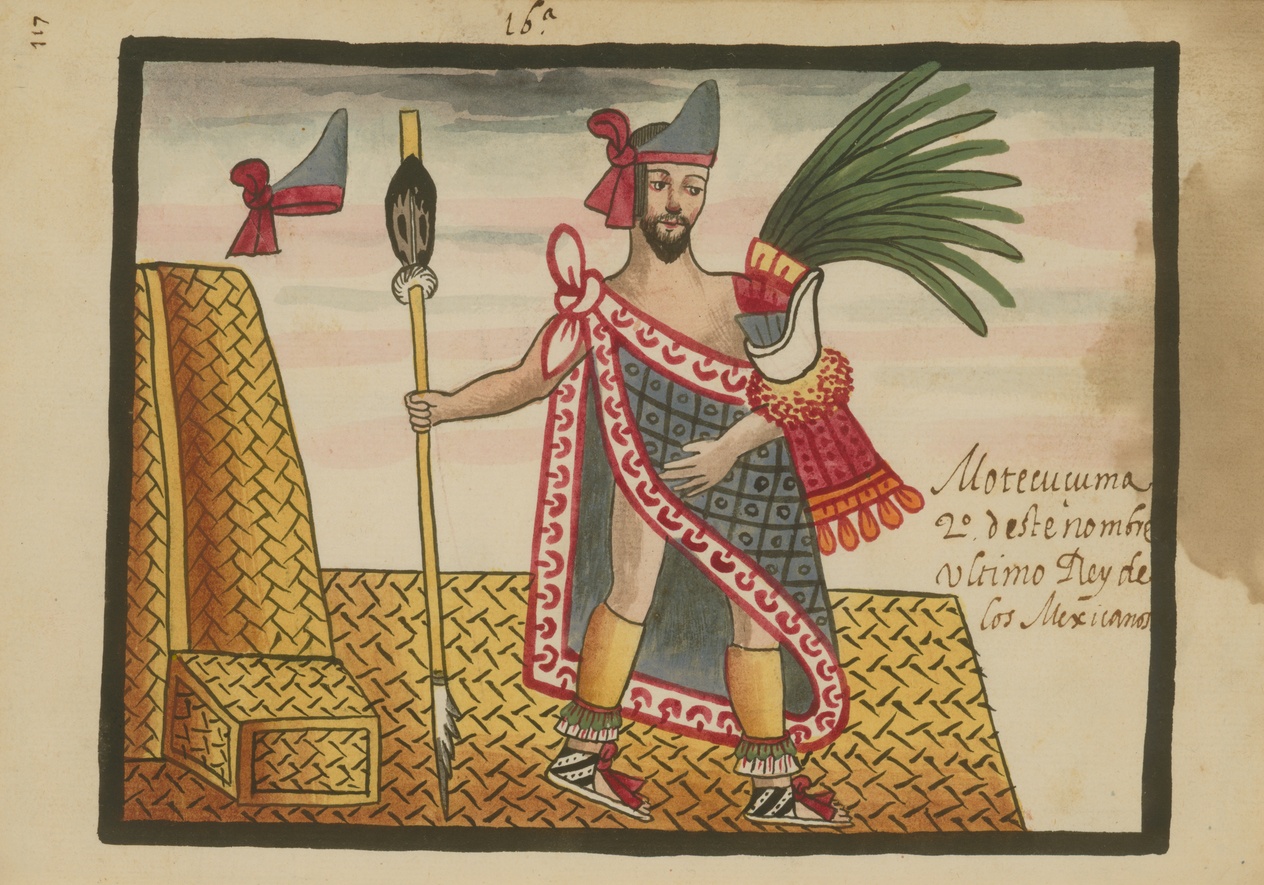 Under the moniker Rainbow Lobster, Arrechedera released a short film showing museum-goers listening to the Truth Audio Guide. The video went viral on TikTok, revealing that his audio guides had been circulating in the museum for over a month without the institution realizing it. The voice of Xokonoschtletl in the audio guide gives “a compilation of what of our ancestors have transmitted to us orally and what I have researched for years.” A short film on www.truthaudioguides.org shows Arrechedera’s process of collaborating with Viennese local Julian Reinisch of Apex Film to infiltrate the museum. They inserted new audio files into around 50 devices circulated from the front desk.

For the audio guide, Rainbow Lobster recorded Xokonoschtletl, the long-time leader of the protest movement to repatriate the Aztec crown, in Mexico City on the 500th anniversary of the fall of Tenochtitlan. The emotional temperature is high every year on this anniversary and was exceptionally so on the quincentenary of colonization. When I asked Arrechedera about the voice of Xokonoschtletl he said, “We couldn’t have just any voice. We needed a voice with authority. He went to the UN and he met with the Pope and the Dalai Lama. He represents a lot of Indigenous people who are dancers and survived the time when even their dances were forbidden: one of the most amazing civilizations fell because of the invasion.”

Following the discovery of the intervention, the Weltmuseum came out with an official statement describing it as “an exciting contribution to the discussion about postcolonial collections in ethnographic museums” and that it “fits well with our idea of diversity [Vielstimmigkeit].” Vielstimmigkeit can also be translated as polyphony, the musical analogy of many voices speaking, not necessarily in harmony, but also without a hierarchy of importance. This can be a mode for collectivism, but once the museum co-opts it, it runs the risk of also becoming a catchphrase for the lack of nuanced difference between items on display. When I wrote my book The Contested Crown: Repatriation Politics between Mexico and Europe, I also experimented with a method of polyphony by leaving large swathes of interviews with Xokonoschtletl Gómora and others in their own words, without interrupting them with my interpretation. Their voices had not previously been heard in the Austrian press or in commentaries on the repatriation debate about this object. In a chapter on writing as listening, I reflected on Rolando Vázquez’s ideas on the decolonization of modernist esthesis through a practice of respectful listening. The hacked audio guide resonates as a translation of these ideas into direct artistic action.

The Weltmuseum version of the feather headdress’ history undermines the object’s preciousness by beginning its narrative by saying that there were “countless” numbers of these crowns. Then it quickly turns to the birds, with platitudes like how their feathers “are indeed very long,” and that “When you leave this room you will see a stuffed quetzal; it was considered sacred” – as if taxidermy was a religion outside the walls of the Western museum. The Truth Audio Guide says the quetzal is a “symbol of peace, duality, beauty, and nature … wisdom, power, eternity.” Meanwhile, the museum tries to debunk certain narratives, stating that “numerous legends were associated with this feather headdress, some of which persist stubbornly still today, for example that it was the feather crown of the ruler Montezuma. This can’t be true…” The Indigenous audio guide replies: “We do not believe in the untruths told for so many years.” Truth in terms of the exact historical provenance of the crown remains unclear, while the conviction of claims that it cannot be transported are being destabilized by new technologies of material transportation. 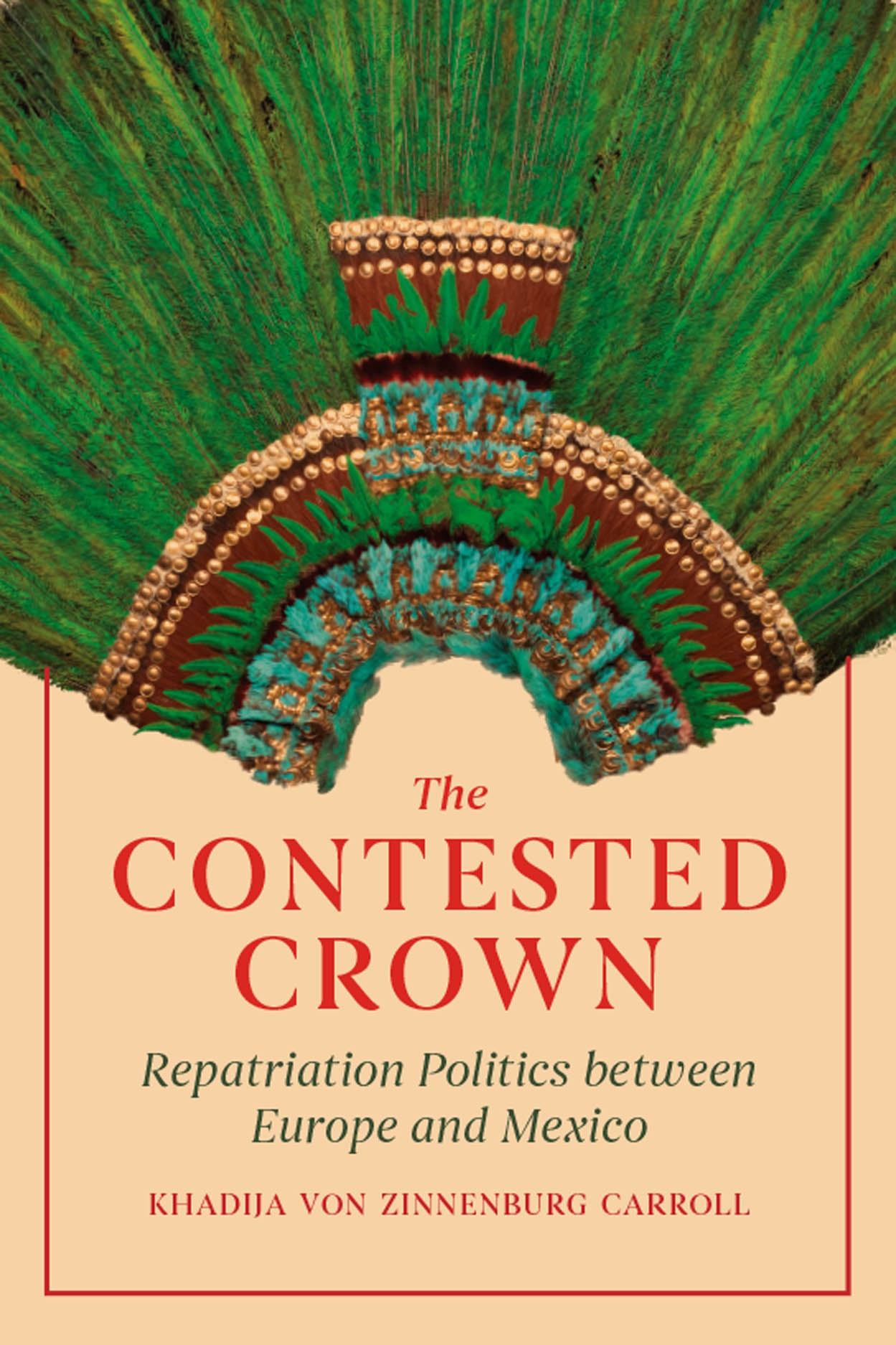 Vague euphemisms in the Weltmuseum’s original audio guide of untruths are also evoked in statements about the crown’s gold being replaced “with a good deal of imagination,” referring to botched restoration work in Austria, when, more significantly, the large birds’ head helmet of gold was stolen at some point during its time in Habsburg possession. Several restorations and changes over time are used to diminish the authenticity of the original, and the technical is used as a way of justifying political ends. A decade-old and politically biased technical study was used to determine that the crown is “too fragile” to travel back to Mexico, even though conservators and engineers around the world agree that the technology to transport it safely does exist. Hence the Social Democrat representative Petra Bayr brought a motion to the Austrian parliament on April 7, 2022, to commission a new scientific study that investigates the options for safe transport to Mexico. This would easily dismantle the last “firm” reason to hold onto the piece in Europe, though it has been nothing but an imperial conservation claim masquerading as hard science. Recounting the details of the parliamentary debate to me the following day, Bayr said, “the only argument that remains to not return it is the technical way to transport this object.” Responding to the claim in parliament that this object “didn’t come ‘unlawfully’ into Austrian possession,” Bayr said that “it’s a question of morality and ownership and a question of who it belongs to, not only in a material sense but in a spiritual, historical, and emotional sense also – what does all the debate of restoring cultural items tell us? This has also played an important role with Nazi-looted artifacts.”

The movement to repatriate stolen objects and to decolonize the museum has made the repair of colonial wounds an ethical imperative, sidelining pseudo-objective arguments about missing provenance. The Repatriates project – a research project I am leading over the next five years with support from the European Research Council’s Horizon 2020 to study processes of return from museums to stakeholder communities – will offer an independent scientific report that does not enshrine the interests of the political organization that commissions it. Based at the Central European University in Vienna, Repatriates is the first artistic research project of its scale, working in Namibia, Benin, Nigeria, Australia, and Mexico.

Arrechedera’s intervention has a simplicity and ease about it that shows how difficult the museums make it for contemporary artists to work legitimately, freely, and critically of existing historical structures. The effect of such a stridently independent action is to show how immutable much of the museum repatriation debate is and how basic small gestures can already enact the change many now seek. On the other hand, by looking more closely at the care and attention given to the preparation of this audio-guide polyphony, the anxiety the public museum creates around privacy and ownership is also a palpable injustice to the public who are its actual stakeholders.

Khadija von Zinnenburg Carroll is an artist and historian currently leading the project REPATRIATES: Artistic Research in Museums and Communities in the process of Repatriation from Europe. She is professor of History at the Central European University Vienna and Honorary Professor and Chair of Global Art at the University of Birmingham. She is the author of The Contested Crown: Repatriation Politics between Mexico and Europe (2022).