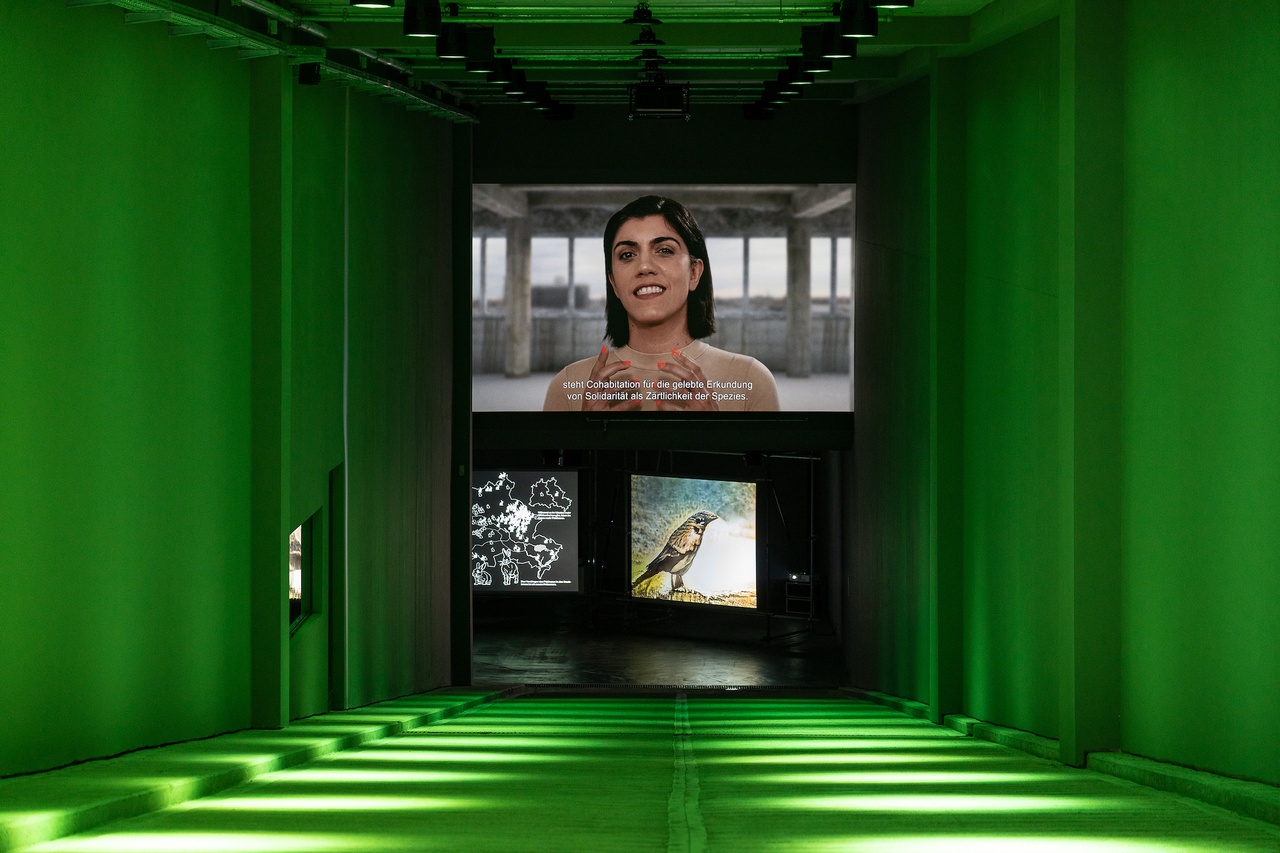 The seemingly unending string of severe and devastating weather events this summer have again underscored the unsettling data about climate change that continues to confirm what we should already know by now: unless we dramatically and collectively change how we inhabit the planet, things will only get worse. It remains a question, however, what those changes will or should look like. An exhibition at silent green this summer explored one aspect of this dilemma, examining new modes for existing with animals in urban space. Art historian Lisa Moravec reports here on the questions involved and how artists attempt to deal with them in their practices.

When I returned to my flat after a couple of days away, I found the table next to my bed completely cocooned with spiderwebs. Did I care? Probably not enough to remove them. Aren’t the hairy arthropods eating the other insects that live in my home sustaining my domestic ecosystem? The group exhibition “Cohabitation – A Manifesto for the Solidarity of Non-Humans and Humans in Urban Space” installed in silent green at the Kulturquartier in Berlin, directly speaks to my intimate encounter with fellow nonhuman housemates. The show provokes vital questions about ways of “living with” other human and nonhuman species in our urban infrastructures. It not only calls for different ways of living together in urban landscapes, but it also addresses the crucial role emotions play in opening up more attentive interspecies interactions. “Cohabitation” makes a strong claim for the decisiveness of the material and infrastructural conditions required for reconsiderations of interspecies sustainability that affect the world’s biodiversity.

The exhibition project, “Cohabitation,” was initiated by the architectural magazine ARCH+ and curated by Marion von Osten (who recently passed away), Christian Hiller, Alexandra Nehmer, Anh-Linh Ngo, and Peter Spillmann. Their contemporary art exhibition is framed with Fahim Amir’s political manifesto, which carries the same title. It is displayed as a text on the ARCH+ website and as a video essay at the entrance of the exhibition space. Amir’s manifesto recalls the work of Donna Haraway, grounded as it is in her ideas of “becoming with” to shape human and animal subjectivities. [1] Two of Amir’s most provocative lines – “Solidarity is the Tenderness of the Species” and “Participation (Teilhabe) also means sharing (Teilgabe)” – are printed on large black banners, agitating the exhibition space. 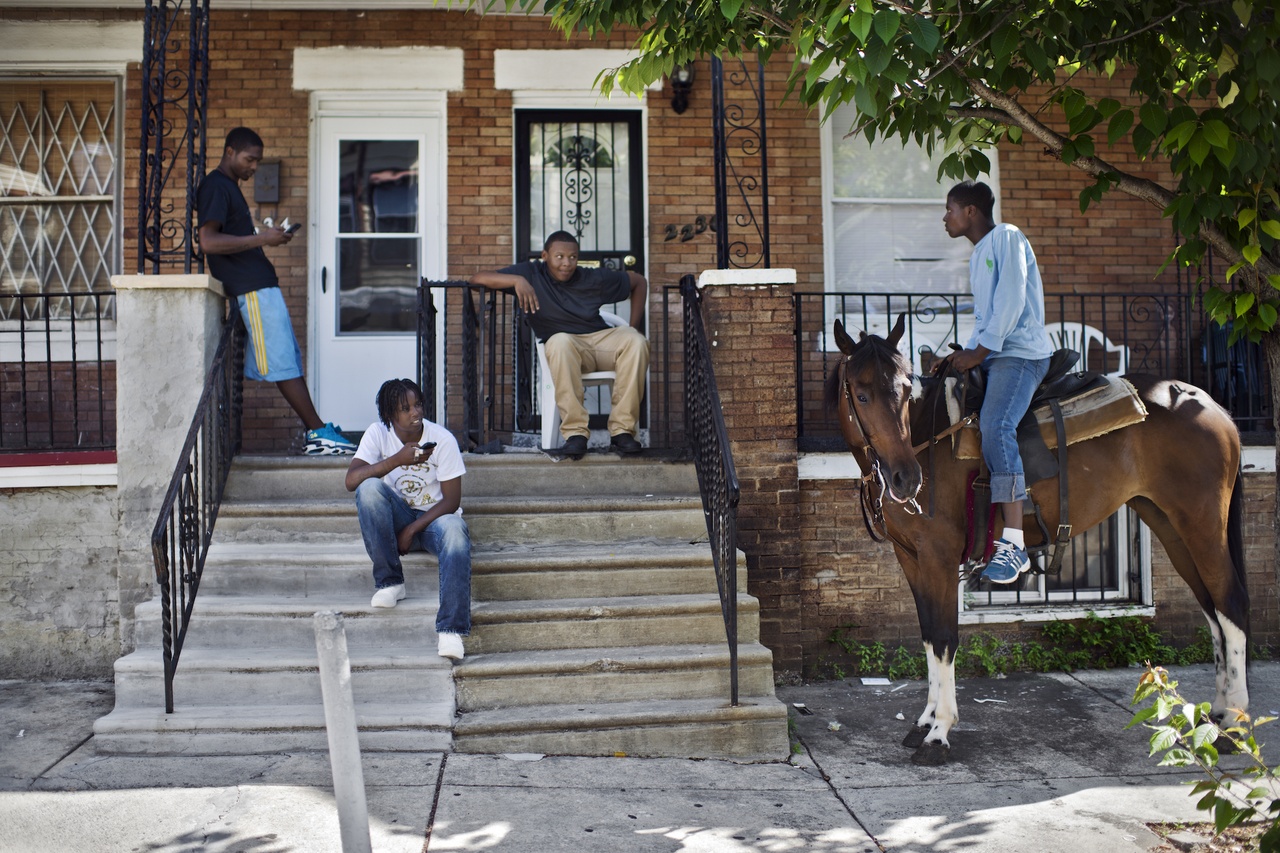 The exhibition’s political effectiveness seems to lie precisely in its epistemological poise. For the cultural journalist Şeyda Kurt, the notion of tenderness (Zärtlichkeit) offers the possibility to distance oneself from a romantic understanding of being with someone else, and it provides a view of unlearning what it means to care for and love someone by reinforcing the implied agencies. [2] For Emma Dowling, care is physical and emotional, and both public and private. [3] The enactment of such politics of care is something that we can learn from animal encounters as a form of attentive interspecies engagement – a type of relationship distinct to a humanistic, economic, and financial understanding of care. Although “Cohabitation” seems to present itself, at first glance, as pithy leftist propaganda that overrides species differences, it unfolds possibilities for more solidary ways of living together with others. The exhibition is thoroughly researched and multifaceted; its focus on animals in contemporary art demonstrates that animal studies are indeed of political relevance to it. Animals are not only good to think with, but humans have always already lived with them.

Three different kinds of animals are included in the exhibition: livestock, wild, and domestic animals. Although they have specific societal roles and uses, all these animals are conditioned to anthropocentric urban infrastructures, within which they live in a more or less symbiotic relationship. The exhibition unpacks this across more than 30 artistic positions. The concept of #*zoopolis*, a form of coinhabiting the modern city, is presented through animal exploitation and animal welfare. The political focus of the artistic works in the exhibition is also manifested in the works’ visual aesthetics, which were compromised in favor of their political expressiveness.

Upon passing the performative reading of Amir’s manifesto by the performer Alicia Agustín, presented as a video essay, the exhibition opens with Moritz Ahlert and Alsino Skowronnek’s large four-channel video installation, Mapping the Post-Human City (2021), which stages data about Berlin’s animal biodiversity in the city’s open spaces and wastelands. Maissa Maatouk’s Now, if you look at the sky (2021), a more abstract video work, takes the skyscape as its subject matter and indirectly draws attention to the fact that it operates as an unromantic site for human war, as well as for “pigeon wars” – a place where power structures are negotiated. The replacement of working animals with machines also fueled social and ecological imbalances. The exhibition includes a common political critique of animal mass production under the hashtag #anthropocity. Through archival documentation of slaughterhouses and meat-production factories, this section recalls that modern mass production of livestock has proceeded alongside the development of assembly-line operation, especially in the United States. 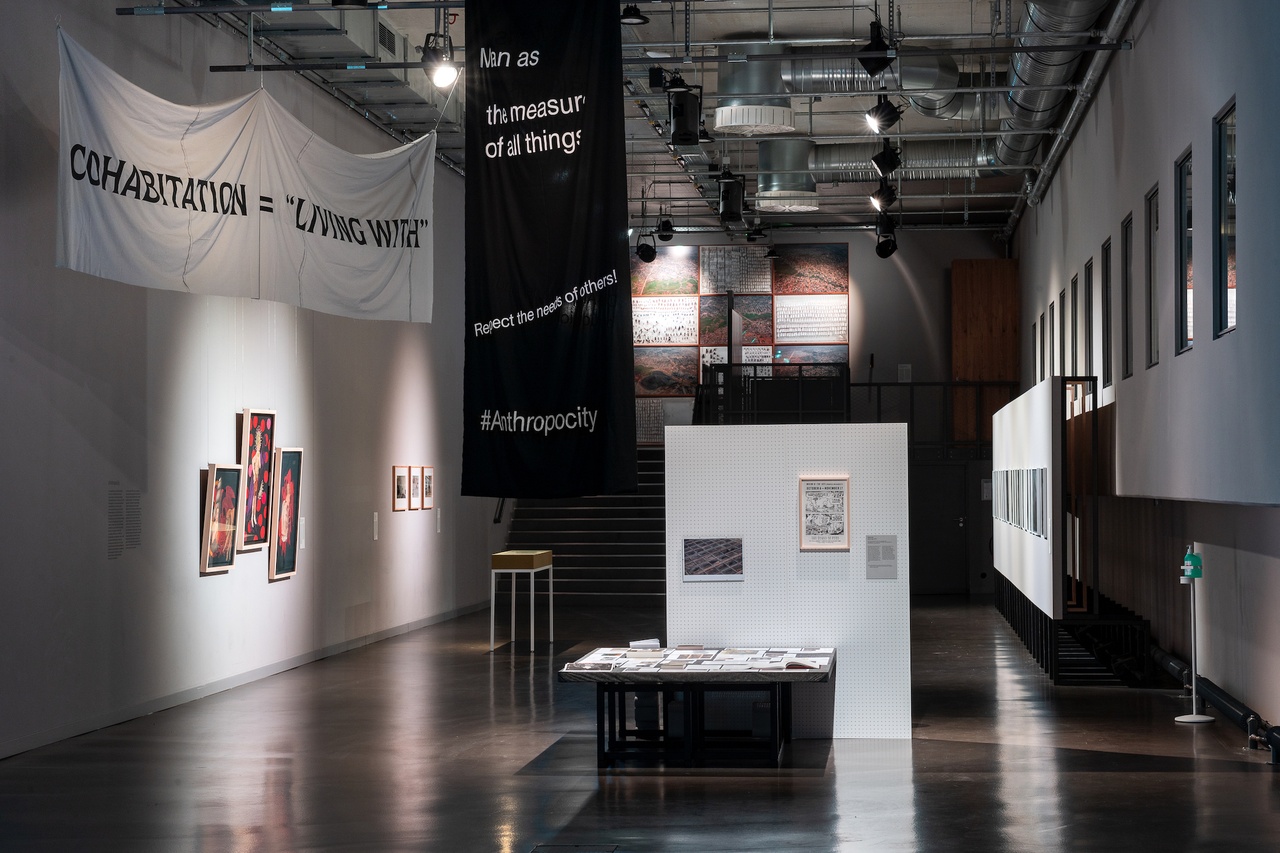 Beyond making ethical claims for a more tender engagement with wild and domestic animals in urban landscapes, “Cohabitation” also informs visitors about life in Bangkok. The Thai city struggles with urban waste, which has led to an increase in rats, pythons, vipers, and cobras. Animali Domestici’s (Alicia Lazzaroni and Antonio Bernacchi) large, colorful wall tapestry, Bangkok Opportunistic Ecologies (2019), and small comic booklet, Comic Untamed Tales (2021), illustrate how ecological imbalances affect natural and animal life through the urban snake problem: if you encounter a snake in your home or on the streets in Bangkok, you can call the hotline 199, and the snake will be picked up – an all-too-easy, temporary form of ecological redemption.

For the duration of the exhibition, silent green itself turned into an interspecies location. Visitors were allowed to bring their dogs. The afternoon I visited, two dogs ran across the large floor carpet, Organismendemokratie Berlin Osloer Str. (2019–21) by Club Real, which was laid out across a bigger section of the exhibition space. The “live animals” inside the exhibition could certainly not understand what it’s about, but perhaps they could tell from the attitude with which they were treated inside and afterwards that the show was all about human relationships with them. Ann Sophie Lindström’s renowned video essay, Don’t Fence Me In (2014), reiterates this issue of everyday interspecies care and working relationships. It focuses on a Black community in North Philadelphia that saved their working animals from slaughterhouses in the wake of the industrial revolution by establishing alternative ways of continuing to work with and care for horses in the city. North Philadelphia’s human-horse community serves as a key example to illustrate how agricultural cattle drovers and coachmen formed communal approaches to living and working together and with different species. Domesticated animal husbandry remains nonetheless a controversial area to examine interspecies relationships. The exhibition satirically addresses this through the video performance Performances for Pets (2014–21), by the couple Krõõt Juurak and Alex Bailey, and the installation Pet-City, a room that, like a child’s, is designed for a specific purpose, though in this case for dogs. Filled with dog commodities (dog brushes, dog cake, dog shampoo, etc.), the animal economy reveals itself on both a social and societal level.

The exhibition closes with an advertising column that provides information about the statistics of pet ownership. The poster The Pet as Companion states that since the pandemic started in 2020, more than 600,000 dogs and one million cats have been bought to make up for the lack of human interaction and affection. With the start of the summer break, which followed a period of restricted physical interhuman encounters, many people already tried to get rid of them. 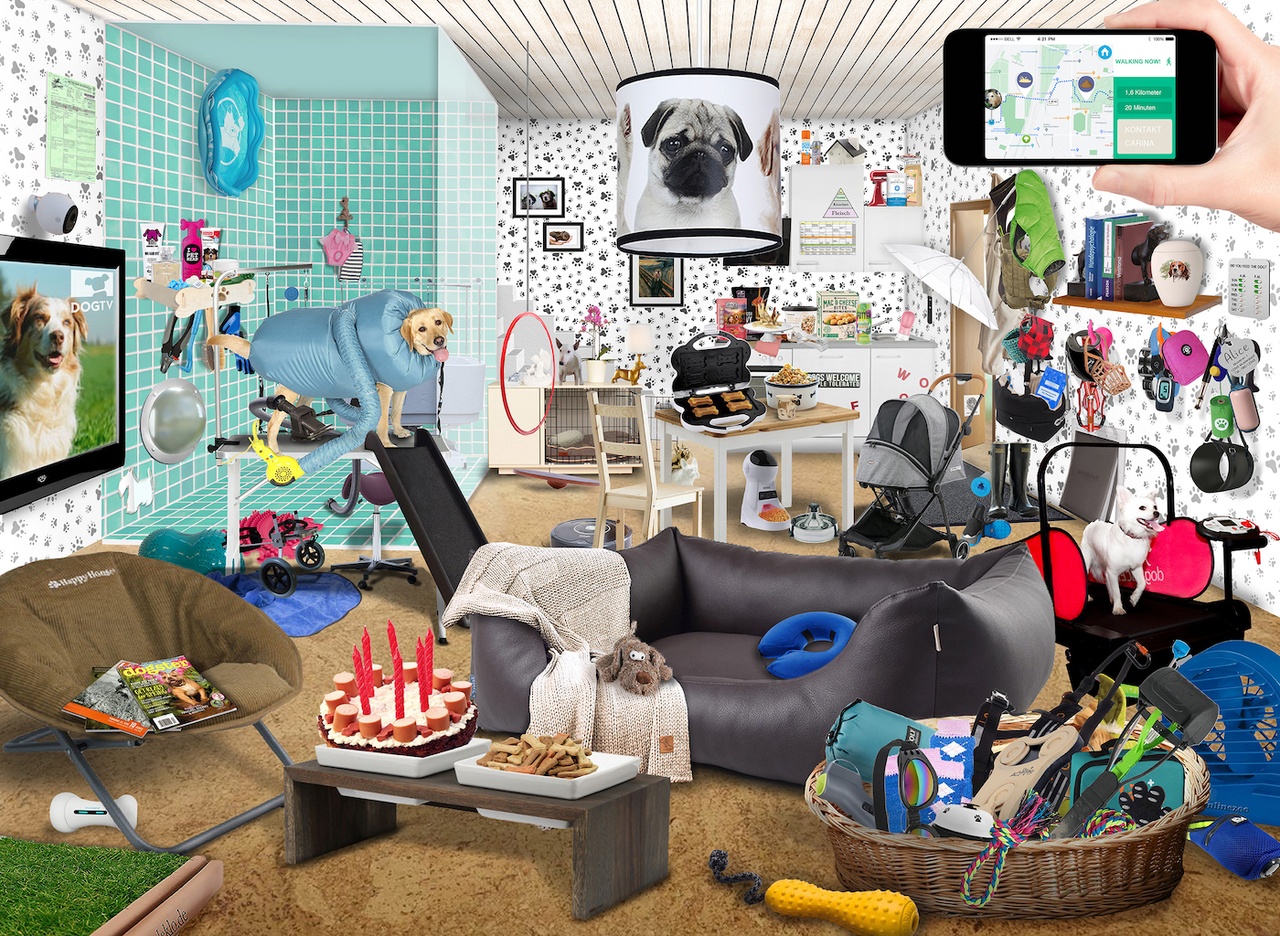 Human-animal relationships are, at their core, ethically, as well as morally, unsettling – in both a positive and negative sense – because care, dependency, attachment, and selfishness keep humans and animals connected. Sharing agential forms of bodily tenderness might indeed open up new ways of conceptualizing and practicing nondiscriminatory forms of love. If sensuous attention is included, everyday carelessness and presumption can, as the exhibition reminds us, transform into acts of solidarity, operating across species in urban settings. “Cohabitation” provides political impulses to radically question how we can live more attuned together, not only in our imaginations and in spaces devoted to art. The exhibition’s strength lies in its political, civil activation. The artworks demonstrate that artistic practices do not have to be primarily interesting for their aesthetic sublimeness; they can also be interesting for their potential to engender a sensitivity to societal political troubles.

Amir notes in his manifesto – the exhibition’s conceptual anchor – that sharing (Teilhabe) requires us to give something up. This insight would imply interspecies reconditioning or, put differently, the material and social reorganization of private and public infrastructures. The show’s focus on the urban realm could have been pushed further by more sharply distinguishing between concretely given forms of cohabitation and more abstract and ideal ones to underscore the universal urgency to not only renegotiate ways of living together with species other than humans but also to reassess the urban landscape itself. Henri Lefebvre in The Urban Revolution asked how to define “urban society” as distinct from the concept of the city. [4] Including animals in anthropocentric conceptions of urban cohabitation certainly involves a rethinking of societal and material structures, and also aesthetic and political practices at large. The difficulty in grasping their entanglements plays out affectively in the cultural significance of “Cohabitation.”

“Cohabitation – A Manifesto for the Solidarity of Non-Humans and Humans in Urban Space,” silent green, Berlin, June 5–July 4, 2021.

Lisa Moravec is a writer, art historian/performance scholar, and educator. She is completing her PhD thesis, which develops a theory of dressage, at Royal Holloway, University of London.