Past and present converge in Salman Toor’s paintings. With thick impasto and expressive brushwork Toor’s compositions can be read as rooted firmly in the history of painting, but the narratives are all his own and decidedly contemporary. Toor takes us into bars and to gatherings with friends, casts the gaze of airport security and captures intimate moments alone at home. While the works fit the genre of queer figuration, Toor’s paintings render a queerness never disentangled from racial and cultural identity, writes art historian Marina Molarsky-Beck. Reporting from New York, Molarsky-Beck considers some of Toor’s many references and asks, how do queer artists and artists of color reenvision the possibilities of figuration?

Salman Toor’s institutional debut at the Whitney Museum of American Art in New York brings together a body of new paintings that sensitively treat questions of queer identity and diasporic belonging. The exhibition, which opened in November of 2020 after a lockdown-induced deferral, is entitled How Will I Know, in reference to Whitney Houston’s 1985 hit. From the jump, Toor summons the melancholia of romantic uncertainty (“How will I know if he really loves me?”), but also a humming sense of existential unease. Houston is, of course, a gay icon and her song a dancefloor staple – or it was, until the global pandemic snuffed out most of what we once knew as nightlife. In a recent interview with the New York Times, Toor remarked, “My work was already about isolation before COVID-19.” [1] Indeed, these are lonely paintings, even when they depict intimacy and its discontents: moments of encounter at the gay bar, smoke breaks on sidewalks, posing for nudes.

This pervasive mood of detachment and alienation, coupled with the brushy expressivity of Toor’s style, makes his work reminiscent of fin de siècle painting. The absinthe-green luminosity and loose, oily facture of works like Bar Boy (2019) and Bedroom Boy (2019) recall Vincent van Gogh’s and Henri de Toulouse-Lautrec’s explorations of artificial illumination – in Toor's paintings, cell phone screens and selfie camera flashes provide the glow, in place of gas lamps and early electric lights. Toor, clearly well-versed in art’s history, makes canny, sometimes humorous compositional allusions: to Édouard Manet’s Bar at the Folies Bergère (Bar Boy) and Olympia (Sleeping Boy, 2019). Nor are his referential interests limited to the familiar highlights of the Western canon – he cites, for instance, the 18th-century Indian miniaturist Nainsukh as an influence on his employment of multiple perspectives. Study of miniature painting might also account, in part, for the subtlety with which Toor’s paintings convey their narratives: much is said, very succinctly. 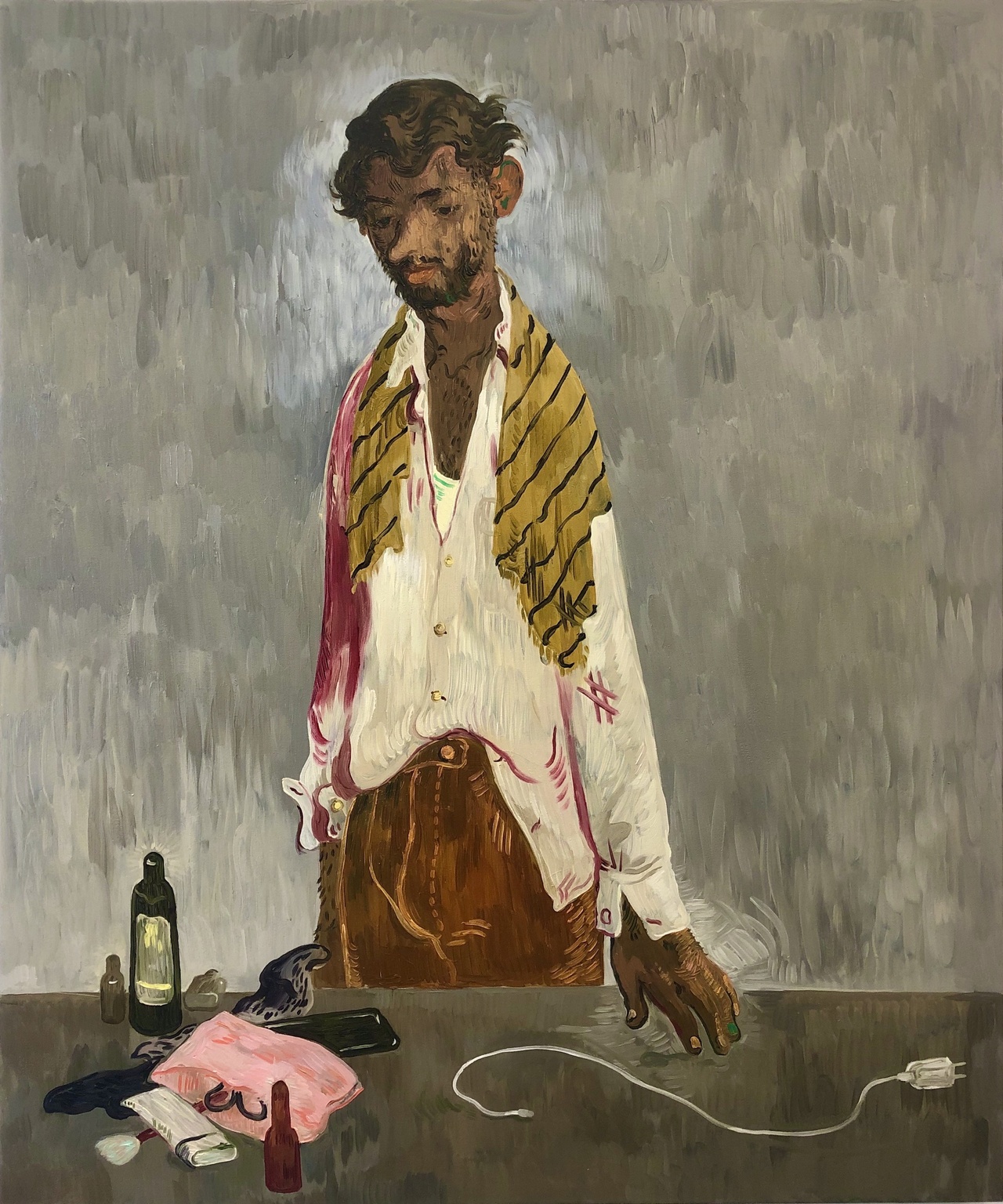 Many of Toor’s works might be termed queer chamber pieces, akin to those by Nicole Eisenman or Toor’s more direct contemporaries Louis Fratino, Jenna Gribbon, and Doron Langberg. Critics have described this particular mode of painting, concerned largely with the representation of a quotidian existence that is visibly and assertively queer, as “queer figuration.” [2] In discussing both Langberg and Toor, Tyler Malone has used the term “the new queer intimism” [3] to cast their painting as a contemporary successor to 19th-century Nabi artists like Édouard Vuillard and Pierre Bonnard. In The Nation, Barry Schwabsky asked, “What’s Wrong with the New Figurative Painting?,” [4] taking a more expansive look at contemporary figuration beyond its specifically queer investments and placing artists like Langberg alongside Amy Sherald to loop together artistic projects concerned, respectively, with sexual and racial representation.

The more ungenerous critics of this new figuration tend to view it as a rehashing of well-trodden painterly strategies, original only in their engagement with minoritized identity categories at the level of subject matter. Old painting made to seem new. Still, the sudden prominence of this new painting begs the question: just what is new about the new figurative painting? How do queer artists and artists of color reenvision the possibilities of figuration? What does it offer them, and what do they do with it?

Toor, born in 1983 in Lahore, Pakistan, now lives and paints in New York, and his paintings shuttle between America and South Asia. At the Whitney, his evocations of queer longing, desire, and conviviality hang alongside scenes of racial violence and state surveillance unfolding on both continents. Two paintings, Man with Face Creams and Phone Plug and Two Men with Vans, Tie and Bottle (both 2019), belong to a series portraying the humiliation – and banal terror – of airport security. Here, the artist assumes the unfriendly spectatorial position of a security officer, looking across the X-ray conveyor belt at the brown men who pass through a screening checkpoint. The subjects stand with shoulders hunched and gazes withdrawn, their toiletries, unbuckled belts, and iPhone chargers splayed out for observation. As the wall text notes, these paintings are self-portraits of a kind, refracted through the imagined eyes of a security officer – pictures of seeing and being seen that make present the dangers of visibility itself. Their nonspecific titling (“man”) is suggestive also of the dehumanizing logic of post-9/11 security theater, which sees all such brown, Muslim men as potential threats. 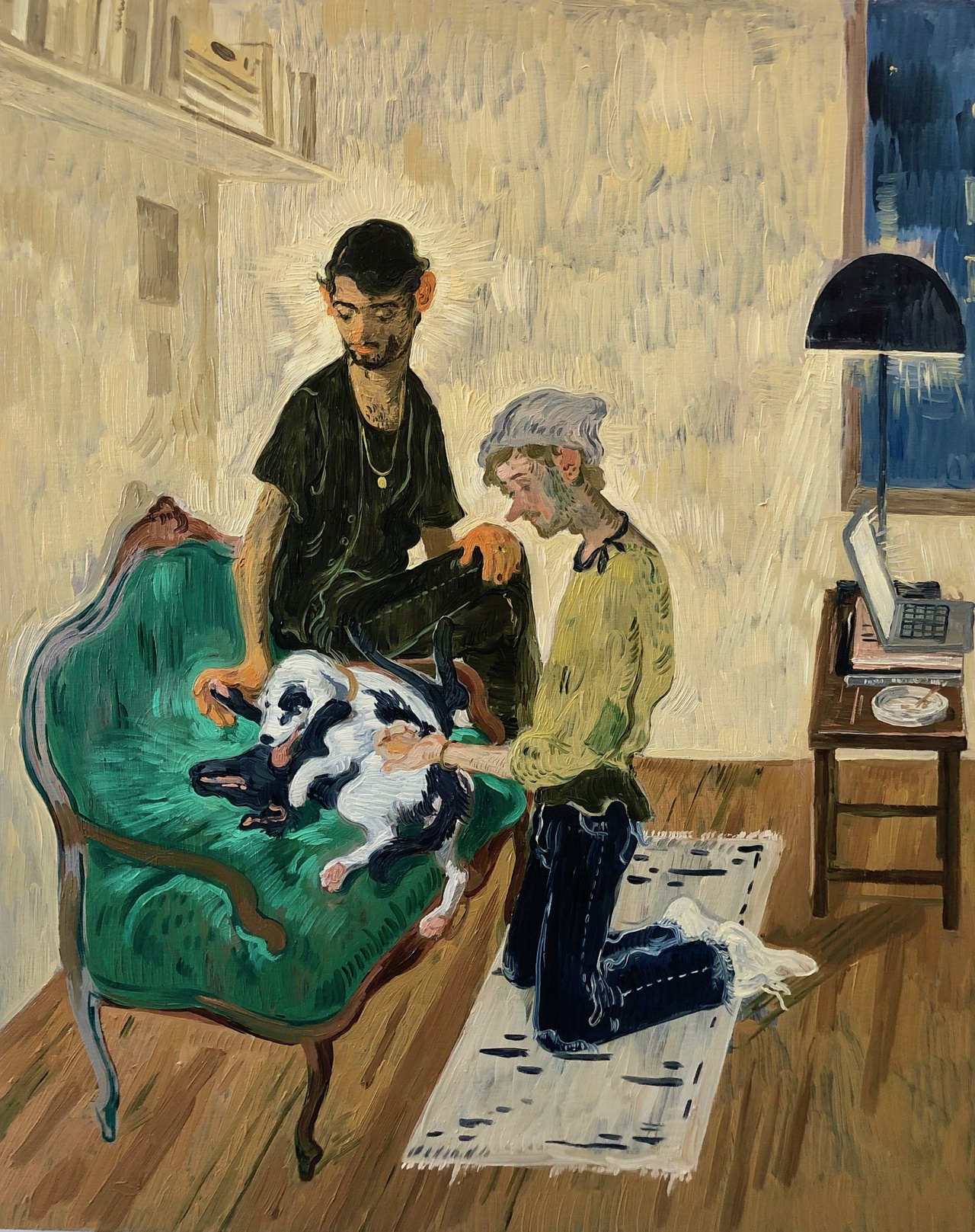 The compositions Toor presents in How Will I Know, alike in their diminutive scale and eerie, sulfurous color palette, deliver dramatic tonal shifts – from the comfort of one’s own unmade bed to the dangerous exposure of a roadside police encounter, with a cop peering menacingly in through the passenger-side window with flashlight in hand. In this sense, Toor’s work departs from that of many of his fellow practitioners of queer figuration – his paintings are, in short, necessarily intersectional, and they render a queerness never disentangled from racial and cultural identity.

There are moments of pleasure and whimsy, as in a canvas depicting two men supervising a “puppy play date.” But the exhibition, curated thoughtfully by Christopher Y. Lew and Ambika Trasi, positions this scene opposite the macabre Parts and Things, in which a closet door opens onto a heap of severed heads and lopped-off limbs, piled atop a powder-pink feather boa and an upside-down torso, dismembered but not divested of its genitalia. Here, Toor recalls Théodore Géricault’s painted sketches of anatomical fragments from 1818 – likely preparatory studies for his monumental painting The Raft of the Medusa, which depicted a notorious episode of cannibalism in then-recent history. In Toor’s Parts and Things, as in Géricault’s studies, dislocated body parts are made uncomfortably material, mere “things” assembled into an uncanny still life – emphasis on the nature morte. The heavy strokes of Toor’s brush, ever visible in his work, here produce a tension between the materiality of the painted surface and the objects it represents. Are these really segments of human flesh, or are they just grisly props? Paint elides the differences between the two, subsuming feather boa and human hand into the same oil medium.

But still the fragmented body retains its racial categorization, with Toor’s composition juxtaposing skin of varying hues – some pale enough to turn green under the glare of a light bulb, some distinctly brown. This painting is perhaps the darkest and the most unnerving in the exhibition in that it makes its violence overt and gruesome, rather than suggested by narrative circumstance. It is also the show’s most obvious departure from the more-or-less realistic representation of daily life – a painting of contemporary life not so far removed, in scope and focus, from the “painting of modern life” famously undertaken by 19th-century artists like Manet. Even the grim fantasy of Parts and Things, though, seems to consider the condition of embodiment as marked by sexual and ethnic identity. Caught amongst the severed limbs, the boa is a signifier of the effeminacy Toor has ascribed to himself as well as to his painterly style. [5] Perhaps form and content aren’t separable after all, and the newness of Toor’s figuration lies in the resonance between his subject matter and his handling of paint.

Marina Molarsky-Beck is an art historian, writer, and curator based in New York. She is currently pursuing a PhD at Yale University, where she studies subjectivity, queerness, and gender in European modernism.