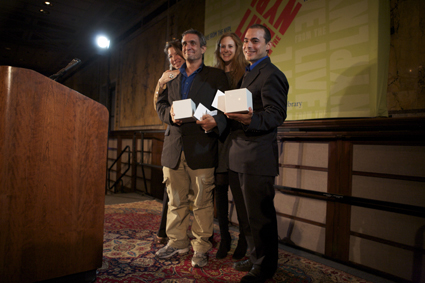 A flame war of sorts began recently beneath Claire Bishop’s on-line review of a lecture program entitled: Revolutions in Public Practice, produced by the New York-based arts presenter, Creative Time. Amongst raising various themes for future discussion, Bishop positioned that “an ontological conundrum”[1] was a foot as The Yes Men had won the inaugural Leonore Annenberg Prize for Art and Social Change, the event’s marquee $25,000 USD prize. Bishop contented that although “the Yes Men adamantly refuse to be called artists (they prefer “activists”)… most of their funding comes from art institutions, and their biggest fans seem to be in the art world.” [2] And, to the institution’s defense, the curator of record for the series, Nato Thompson, responded in the review’s talk back section to this and other queries by saying, “admittedly, the question of what constitutes art (I prefer the term culture) wasn’t addressed head on”[3]. Instead of assessing what is art, a discussion in which “cultural production’s relevance to everyday life”[4] was tackled in general by looking at the “evolution of the filed of political based public practice”[5] in the specific, which is fair enough. Although much of this flame war—which included seventeen replies of varying length, several from not only the project’s curator, but from the presenting artists as well as attendees, and focused primarily on the symposium at large—few bothered to care about Bishop’s opening question: is their a problem when professionals from defined fields outside of art disciplines are happy to interlope when there is cash on the line, and conversely, why do art institutions participate in this practice? This is a question different from asking what is or isn’t art, nor does it ask if art should become more interdisciplinary, it is a question about motivation and exploitation.

To the credit of the overall program which did offer an extensive and generous survey of the burgeoning field of contemporary “social practice” as its now called in the art milieu, the awarding of The Yes Men was a intriguing addition—however, if an institution wishes to position itself in the light of the expanded humanities and not simply that of an “arts” organization, more thoughts and examples from other and related fields need to be presented comprehensively.  But to get back to the case at hand, why would such an institution present and award satirists as artists—that is to say since the program was not on the idea of media satire and didn’t juxtapose The Yes Man’s work with political cartoonists, comedians, filmmakers and the like to look at the intrinsic economies of satire?

To unpack this a bit, we need first to look at the institution(s) itself (themselves) and ask not why these projects are funded, but why there is funding in place for them already. This is of course a question regarding value, that is to say, what is the justification for these kinds of projects and why are there funds and institutional forums in place for them in the art world? An easy answer would be that both the institution and the award recipient share some form of political disposition and commitment to it, and that is reason enough, almost like a pat on the back. However, if this is the case, why wouldn’t the award go to South Park for example or simply to a community organizer, union leader or anyone who shared this disposition, instead of jumping through hoops and pretending that just because a project is aesthetically composed, as almost all are, that it is automatically art in the professional sense of the term? Also, what does this say about art; is this a reactionary reply to the cultural critics that are currently deriding the field for being “inaccessible”, that it has lost touch with society and needs to find relevance through some form of direction interaction with society-at-large—an argument based on an idea of art’s general utility as paramount.

Philosophically speaking, and this is the tricky part, qualifying a project through the lens of funding would depend on the calculation of some form of measurable return, which would reframe any project. In the context of socially based practice, which all art is, or any practice for this matter where no object is traded and sold, and idea of profit or gain would need to be posited and measured through a definable “result”.  Most often, this “result”, institutionally, is measured in acceptance, that is to say, popularity and transmission, since very few projects effect other quantifiable social changes when artifacts are presented after the fact—except in an educative sense, which is inherent to all displays.  The thing that might raise an eyebrow or two for some is that this popularity is not bound to the internal economies of a work’s artistic production, that is to say a mass interested in questions about the crafting of art and its discourses, but is an appeal tethered to the “secondary” effects of reception, audience procurement and satisfaction, i.e. campaigning. Although an audience may witness a cathartic or empowering presentation in this framework, it is also institutionally necessary to award the presenters as a recognizable franchise. In this case, confirmation is found in the recycling of the same simplistic rhetoric lambasting more or less the same targets—Haliburton, the Iraq War, Climate Change, as if many weren’t already covering this in greater detail, as well as The Bhopal Disaster—to an extant no further than: here are the bad guys, lets make fun of them, and one day maybe make them pay. It is this set-up, which appeals to both institutions and donors alike, as it is a position more akin to media sound bites than to academic, or shall I say, some measure of political discourse questioning how the administering of justice can be preventative and not simply punitive. Maybe by tackling the “big transgressors” as subjects, some form of ground swell may occur—and I do think that the Yes Men are humorous enough comics to win this kind of interest—however, it’s too early to gauge if these actives offer a way out of mass consumption, or like its form and trade, is simply another product of it.

Quite simply, what unites many utilitarian social projects is that by definition they need to create some form of concusses to have a group in the first place, that is an audience, which in many ways delivers a market, or if you prefer a constituency. As all conversations need to have some focus or center point to rally upon, many of these projects propose a target, which in this realm generally revolve around issues of power and inequity.  Rightly so, these are issues to question, ridicule and the like, and are also tantalizing subjects.  Yet, from the point of their inception, this act of growing consensus is the goal and as such, formulates a teleological aim or platform to be packaged and replayed.  To this end, that is achieving consensus, aesthetics are often marshaled in order to make light of an issue, that is make it attractive to a wider public—which in itself poses a larger societal problem, that social justice needs to compete with entertainment. As the target of a given consensus driven investigation is not aimed at deriving pleasure from the making of this project as an end in itself, even if such pleasure is achieved, or better yet, in the sharing of the skills of the presentation’s construction, aka, self-reflexivity, the resultant activity is by definition instrumental when looked at from the position of artistic production—for how else would art effect social change if it did not poses instrumental capacities? So, what might be the problem?

Well, herein is the readymade value for an institution; since these projects are good at uniting broad audiences through a broad topical appeal, they have a quantifiable public, like their fellow satirists, Steven Colbert and John Stewart for example, who frankly are better at it. Now, this is certainly not a bad thing, especially if the target of critique is “just”, but it does poses unique difficulties, not only to an idea of art itself as a profession, but also to artists, socially minded or otherwise, who’s work may not be able to foster a mass appeal. And here is where some of the animosity may stem, particularly when aesthetic devises can be used to also create the semblance of an artistic practice that is then leveraged into the funding bodies for an already existing community—without give back much to it. However, again, this is an extrinsic problem related to the labor relations of art practitioners. Yet, if more of this kind is able to leverage into the presentation mechanisms of art, the field of art presentations may skew toward the economy of popularity or mediagenics over that of more self-reflexive, investigative, and less populist presentations. In the United States, this is already the case as blockbuster shows already exhibit, but should this too become the direction for socially minded projects?

Practically speaking, this award did bring a level of exposure to the forty or so other participants in the symposium and with it, most likely some extra support. And this is nothing to scoff at. However, the question still remains, is a trickledown economy of “exemplars” a necessary evil to break through the noise of contemporary media culture? Did there need to be an award in the first place, that is if the theme of the symposium was justifiable in itself, and to that end, if there was a need, why look outside for the recipient instead of championing socially aware practices closer to home?