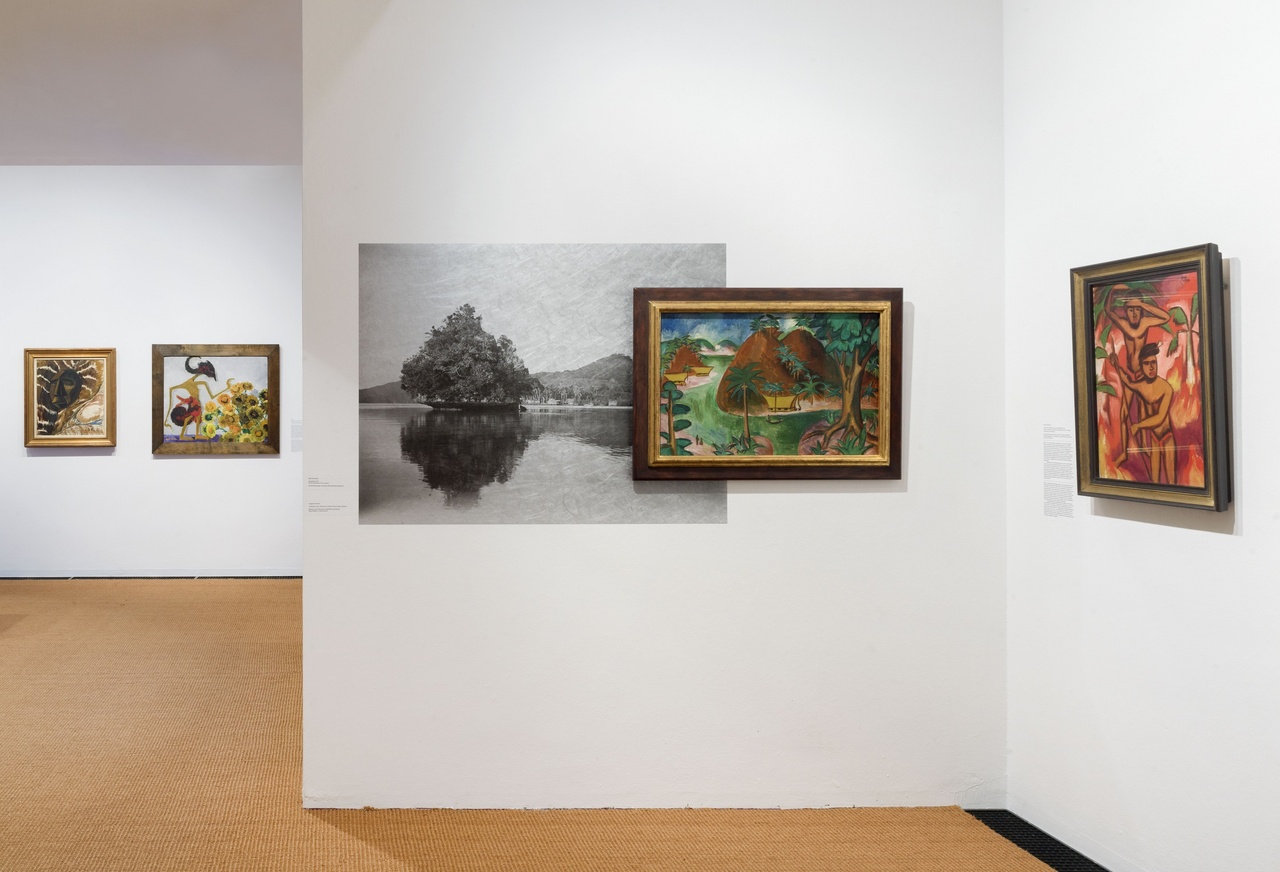 After a few decades of the rigorous development of postcolonial theory and decoloniality in the academy, efforts to decolonize museums and cultural institutions were only really initiated in the last half decade. In Germany, tangible action began with symbolic shifts, such as the 2018 renaming of Hamburg’s ethnological museum to the Museum at the Rothenbaum – Cultures and Arts of the World (MARKK), and has continued with fervorous and sustained momentum, exemplified by the unrelenting movement against Berlin’s Humboldt Forum. The most recent addition to this effort is an exhibition at the Brücke-Museum in Berlin that critically examines the long-celebrated expressionist group. Writer and art historian Tobias Rosen considers the efficacy and originality of the exhibition and asks whether the museum’s efforts go far enough in unpacking the institution’s own history.

Like so many public gatherings of 2021, the opening for “Whose Expression? The Brücke Artists and Colonialism” was held outside. While some visitors kept warm by huddling around firepits, I tried to photograph the reflection of the flames in the museum’s windows, intrigued by the thought of what it would have been like if the flames were actually in the museum. Did other visitors share my feeling that something beautiful had been set ablaze?

Of course, no paintings actually burned, but for loyal fans of Die Brücke, the exhibition may have had a distressing, iconoclastic effect. Artworks previously hailed for their formal innovation, for casting away Bürgertum and criticizing modernity, are proven to be racist, colonialist, or orientalist at their core. Beginning with a wall-spanning timeline, which intermixes important dates of Die Brücke with those of German colonialism, visitors receive a historically meticulous account of each artist’s whereabouts in the colonial matrix of power, during visits to circuses, colonial exhibitions, “human zoos,” and ethnological museums in Germany, as well as travels to the colonies, such as Palau. The exhibition’s reckoning is undoubtedly important, but it is not a new critique. It requires that the Brücke-Museum figure out how to maintain a young, diverse, and critically engaged public through nuanced reflection on the legacy and horrors of German colonialism, rather than expressly on the aesthetic value or avant-garde status of the art in its collection. The challenge dovetails with the citywide debate – with global implications – about how to proceed with the unfathomably large, expensive-to-maintain, and chronically unpopular collection from the former Ethnological Museum of Berlin installed now in the Humboldt Forum. “Whose Expression?” testifies to the need for a restorative, historically accurate, and imaginative way to engage Die Brücke.

Upon entering the exhibition, the visitor confronts the question, “WHAT DOES CULTURAL APPROPRIATION MEAN?” in bold letters, affixed directly to the first wall. Comparisons between Brücke artworks and reference objects in this room serve as examples of how cultural appropriation operates visually. Reproductions of the famous Palau beams, for instance, vertically bracket Karl Schmidt-Rottluff’s small wood panel carving Zwei weibliche Akte (1911) and Max Pechstein’s oil painting Das gelbschwarze Trikot (1910). Both artists excerpted the serialized, hard-edged figures of the beams for their own purposes after seeing them in the Dresden Museum of Ethnology, where they had been housed since Carl Gottfried Semper received them as a gift (under questionable circumstances) in the 1860s. Ernst Ludwig Kirchner’s Frauen im Bade (1911) also turns to the “other” for corporeal liberation, although here the women’s bodies are rotund, their breasts and hips exaggerated. Unlike how Schmidt-Rottluff based his figures on direct observation of the beams, Kirchner’s composition is copied from a plate in John Griffiths’s 1896 book The Paintings in the Buddhist Cave – Temples of Ajanta, which is also exhibited. Through these examples, cultural appropriation is illustrated as a process in which European artists utilize a motif, medium, or composition from an artwork or object that has either been physically extracted or illustrated in orientalist literature in order to realize their own fantasies or liberate themselves from European society. 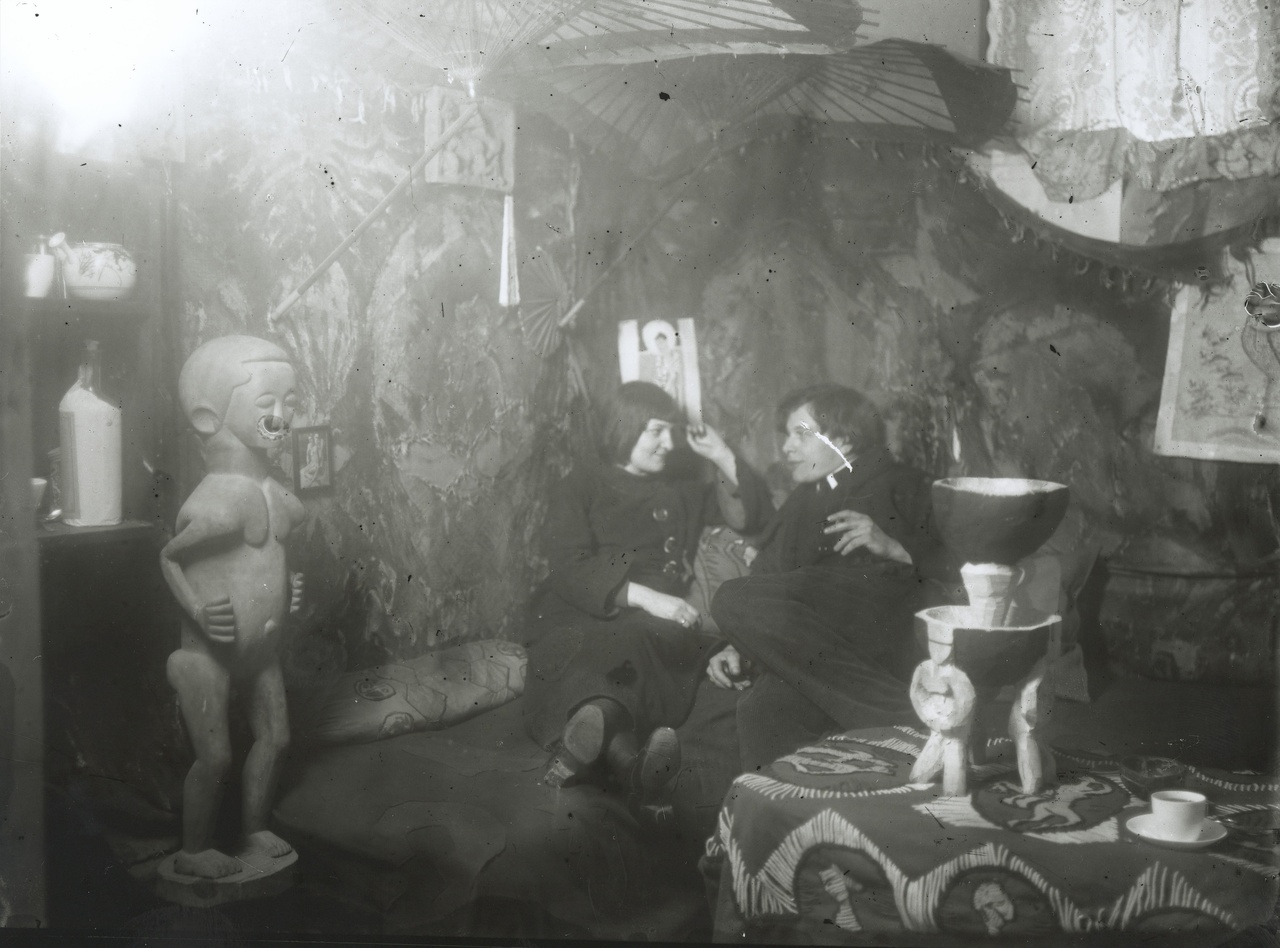 A short anecdote in a wall text shares that Emil Nolde explicitly opposed the juxtaposition of his art with its colonial sources. He wanted the two to be “spatially separated from each other” to preserve his work’s “originality.” In this sense, “Whose Expression?” seeks to disarm the artworks and undermine the artists’ intentions. This is a promising curatorial strategy, yet it is also tricky; simply reattributing originality to the source objects can risk re-exoticizing them and furthering their decontextualization. The exhibition is not designed to create a mutually beneficial constellation of “affinities” between objects from the West and those from formerly colonized regions of the world, with the suspect goal of equalizing the two and elevating the formal values of all works to new heights, as was the case in the 1984 exhibition “Primitivism in 20th Century Art” at MoMA. [1] Here, curation is geared toward disclosing the artist’s privilege, exposing ideological fantasies about the “other,” and certifying that colonial governance and trade networks were the conditions of possibility for artistic practice.

The difficulty of exhibiting such juxtapositions constructively might be a reason for the exhibition’s sparing use of source objects or why Schmidt-Rottluff’s own collection is not incorporated but sequestered in Kunsthaus Dahlem across the garden. It’s easy to criticize an exhibition for its lack of primary sources for comparison – which might have straightforward financial and logistical reasons – yet the deficit here shows sensitivity to the deep uncertainty in contemporary European society about how to handle and exhibit plundered objects. In her record of the meltdown of her directorship at the Museum of World Cultures in Frankfurt, Clémentine Deliss vividly describes the conflict between decolonial theorists and traditional museum functionaries about whether such objects should be further preserved and studied with respect to their culture of origin or incorporated into an impermanent, “metabolic” artistic body. [2]

Reproductions in the exhibition provide just enough evidence to clinch the argument about appropriation, without having to take a definitive stance about the past or future of these things. Blown-up floor-to-ceiling photographs of cluttered vitrines in the Ethnological Museum of Berlin from the early 20th century indicate the magnitude of colonial accumulation. The halftone structure of these images, however, limits their transportive capacity and dispels any lingering sense of exotic aura. 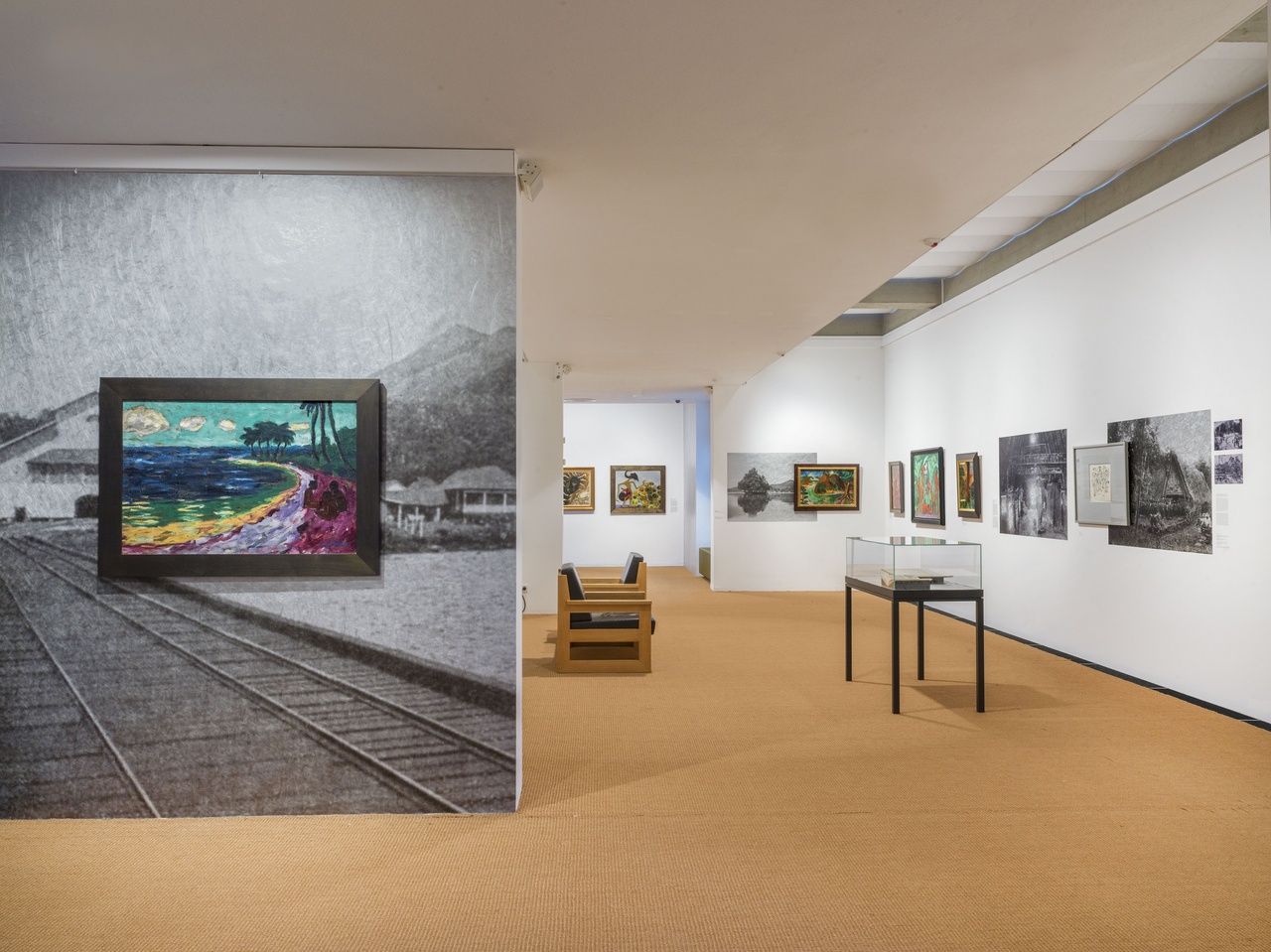 The exhibition takes an overtly discursive mode. Visitors are tightly controlled at every corner by small wall-mounted directives, which tell them what to look at and how to see it. Take Meeresbucht (1914), Nolde’s scene of three nude islanders on a balmy day. The painting is engulfed by the diagonals of railroad tracks in the black-and-white photograph that acts as wallpaper behind the painting. Wall texts on both sides of the work explain how Nolde ignored the reality of colonial infrastructure present in Palau at the time of his visit, preferring instead an undeveloped fantasy of the island. Yet the comparison is so effective because of how the coastline’s rainbow contours rip through the landscape like steel tracks. There is little time to contemplate another interpretation, or what it means that the painting’s defining structural elements – the central perspective and repoussoir – are, like the railroad, European technologies. If one takes a look at the scaffolded bookshelf between two exhibition rooms – an imposing assemblage installed by Contemporary And (C&) dubbed “The Center of Unfinished Business,” compiling exhibition catalogues and scholarly books – one might begin to doubt the exhibition’s advantage over a richly illustrated research library. Most of these comparative objects have already been brought to bear on the art elsewhere. On the other hand, the exhibition synthesizes a wide range of thoroughly researched arguments on Die Brücke and colonialism in Berlin for the first time.

The Brücke-Museum’s current readiness to begin the “confrontation of its colonial legacy” piggybacks larger institutional efforts in Germany, such the restitution of the Benin Bronzes or the renaming of Hamburg’s Museum am Rothenbaum. But, again, this is not the first time that cultural appropriation and inappropriate exoticism in Brücke art are being critiqued. Already in the 1930s Georg Lukács, who rejected the Brücke movement but was not sympathetic to Goebbels’s “Degenerate Art” exhibition, considered paintings like Nolde’s Holzfigur (1912) tacky pastiche profiteering on colonial spoils. [3] After the war, such opinions were harder to find because critics and historians were committed to rehabilitating the reputations of artists disparaged by Nazi propaganda, although there were some dissenters to this trend. John Anthony Thwaites, a die-hard proponent of abstraction, ridiculed Schmidt-Rottluff and his most loyal collector, Rosa Schapire, precisely for their primitivist fancies. In reference to Schapire’s house, whose walls were densely hung with paintings by Schmidt-Rottluff and full of furniture made by him, Thwaites called the place a “geistige Südseeinsel.” [4] Thwaites did not explicitly charge primitivism as morally condemnable – which the exhibition does – but he made clear that it was decidedly uncool.

The founding of the Brücke-Museum in the 1960s would not have been possible without the championing of Schmidt-Rottluff as West Germany’s preeminent artist and teacher by critics such as Adolf Behne in the years immediately following the war. [5] During that time, Schmidt-Rottluff also resumed collecting and painting plundered objects. His persistent colonial habits are alarming in light of the simultaneous efforts of African artists and politicians, such as the Senegalese poet and politician Léopold Sédar Senghor, fighting for independence. “Whose Expression?” gives the visitor little help in positioning Schmidt-Rottluff between the poles of decolonization and neocolonialism. Confrontation with the Brücke-Museum’s colonial legacy – not just with that of the artists in its collection – demands close examination of the postwar era, not just Die Brücke’s golden years (1905–13).

The last oil painting in the exhibition is Schmidt-Rottluff’s Afrikanisches (1954). It is a domestic still life inflated with exotic objects from the artist’s personal collection: a jar, a woven basket, a mortar, and a Kom-style buffalo mask from Cameroon. Before purchasing one himself, it is likely that Schmidt-Rottluff saw many similar masks in Berlin’s Ethnological Museum. My bet is that the mask here was produced for the tourist market and has nominal financial value. Yet mounted on a black-and-white photograph of the artist’s Wunderkammer, the colors strike me as more important than the provenance hunt. Green on black, purple on black – these shadows are frightening and alluring. I wanted to know their logic and politics. Accusations of cultural appropriation didn’t solve the riddle. Perhaps roasted by the bonfires in my head outside, I jotted down a fragment of a thought: “colors project twilight toward incendiary artifice.”

Tobias Rosen is a writer and art historian based in Berlin. His grandparents taught him how (and how not) to collect.