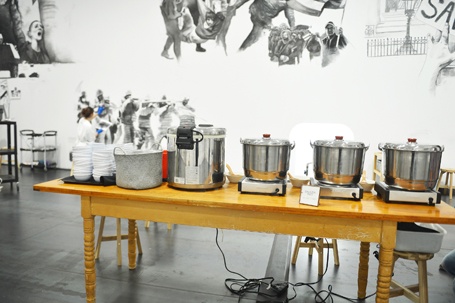 Ever since the emergence of Relational Aesthetics in the 1990s, museums and other collecting institutions have had to think differently about how they commission or acquire works that depend on audiences; where audiences are part of the work itself. No one's practice embodies this challenge more than that of Rirkrit Tiravanija, whose early cooking performances were at pains to turn the elitist space of the gallery into a welcoming event that nourished those in attendance with food and not just nice things to look at. Recently, a new Tiravanija work was acquired by the major Washington, DC institution for contemporary art, the Hirshhorn Museum and Sculpture Garden. Art historian and critic Julia Bernard offers her take on the unusual stakes for food in the spaces of high art.

While at this point in his career a relatively well-known quantity, with his most recent installation at the Hirshhorn in Washington, DC – “Rirkrit Tiravanija: (who’s afraid of red, yellow and green)” – many of this artist’s familiar presuppositions and procedures must be called into question. [1] This observation is not necessarily negative per se (and I might give Tiravanija the benefit of some of my doubts), but it is made on the basis of critically experiencing this work in its here and now. For considering the Hirshhorn’s prominence on the National Mall, and in light of the United States’ present political turmoil (serial constitutional crises, continuous partisan rancor, and an almost surrealistic upcoming election), such reservations seem to especially warrant serious reflection. Does this intervention convincingly engage with those larger contexts surrounding it, or is it over-shadowed by historical events, maybe even referencing politics as a programmatic gambit?

Tiravanija’s (who’s afraid of red, yellow, and green) (2019) is being shown here as it has been acquired by the museum, one question thereby raised being whether the artist’s having adapted his signature paradigms to this setting makes it essentially a commission. (As part of its conceit is culinary, this would give the sense of buying into a “franchise.”) Presented as “interactive,” calling to mind “virtual reality” works like those of the Meow Wolf group, this installation is composed of three interrelated elements: a meal, wall-drawings in the process of being traced by local artists (from projected protest imagery) morphing into a mural, and three sociological documentary shorts. With these first two components, what “binds” them are the colors of the piece’s title: the Thai curries being served are red, yellow, and green; so too is Thailand’s flag, and we are told its struggling political factions also once wore T-shirts in those colors. Tiravanija explained this schema onstage in conversation with the Hirshhorn’s former curator of media and performance art, Mark Beasley, stressing that he has always tended to ditch “aesthetics” in favor of the social-relational. [2]

Nevertheless, his title frames the whole by placing it in artistic relation to Barnett Newman’s series of four Color Field paintings, Who’s Afraid of Red, Yellow, and Blue (1966–70). Speaking of “relational aesthetics,” another reason these works may have ironically been selected as a point of reference is that two were attacked by spectators-with-a-vengeance – one slashed in Berlin as a “perversion of the German flag” (1982) and another by a realist painter in Amsterdam as detested modernist abstraction (1986). With specific respect to Tiravanija’s context-acknowledgement, relating to the Hirshhorn in its US capital setting, images of historical (and more recent) American protests (including 7000 shoes on the Capitol lawn in 2018 memorializing children killed by gunfire) are juxtaposed with those of Thai political atrocities and riots. Further, an increasingly gentrified DC’s ever-expanding dining-out scene also seems obliquely “present,” since rather than the artist himself cooking for visitors – as in his most well-known work, Untitled (Free) (1992), where Tiravanija emptied out New York’s 303 Gallery and cooked pad thai for attendees – this “communal” food is instead catered by a restaurant actually called Beau Thai. Here, then, we are not being “invited over,” but rather “out to eat.” [3]

But can the artist have known that, rather than earnestly interacting as prescribed, we as participants who do not know each other – in a city where it has become anathema to talk politics with anyone you do not – potentially experience this complexly contrived situation as uncomfortable, rather than idealistically “shared” (or perhaps even because it is so)? Or that eating in a museum exhibition space is as anxiety-producing as touching the artworks, since it feels unnatural as it is usually forbidden; or that doing so, even in some choreographed fashion, in proximity to representations of political dysfunction and dissent, can produce more anxiety than “interactional” freedom? Or that some recent interfaces between restaurants and partisan ideological stances in this metropolitan area have led to previously unimagined behavior on the part of diners, staff, and intruding protesters? It is possible Tiravanija is aware of and using all this, but one is uncertain. 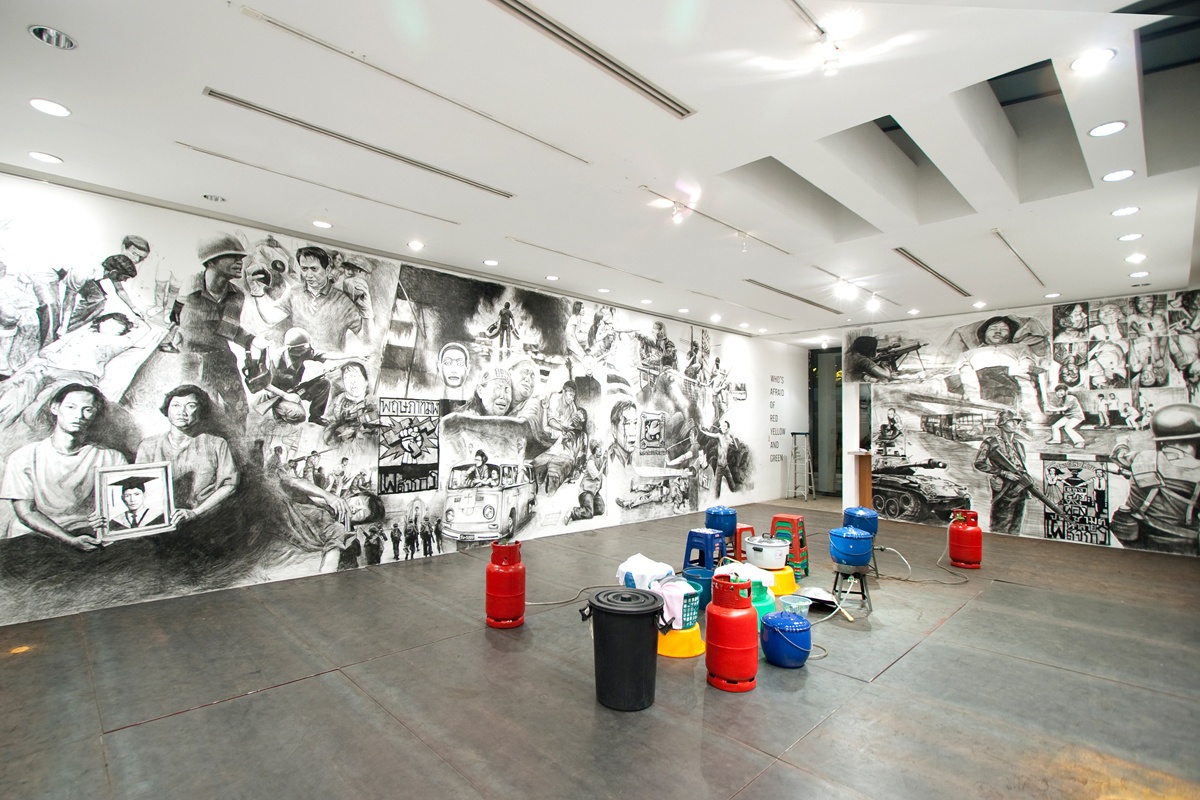 “I think we just need to make a space where people can listen to each other,” the artist said at the show’s press preview. “We need to say what we think, and we are going to say and think differently. We need to understand that that can exist together. It doesn’t have to be a divide.”[4] Would that it were so; it appears the relic of a modernist utopia lives on here, in the guise of a “relational aesthetics” theorized in the 1990s. It seemed telling that the “mural” making up part of Tiravanija’s installation would be continually worked on with charcoal by their outsourced artist team, until its political motifs run together at the exhibition’s end – making the walls entirely black – so that they will ultimately become illegible.

The curry I chose was a hot one, and the tank of water thoughtfully provided to drink to soothe its aftereffects was empty. Crunching down the Mall’s gravel path as dusk fell, the Capitol in full view at one end – with its paired architectural wings housing the US Congress’ legislative bodies, for years at loggerheads with one another and/or the executive branch, blocking virtually all functioning as once constitutionally conceived – hovered like a democratic illusion.

After the present show concludes, the Hirshhorn will not need storage space for its new installation: for it is constituted by neither objects nor a conceptual diagram, but rather an ideal.

Julia Bernard is an independent art historian, critic, and translator based in Washington, DC.