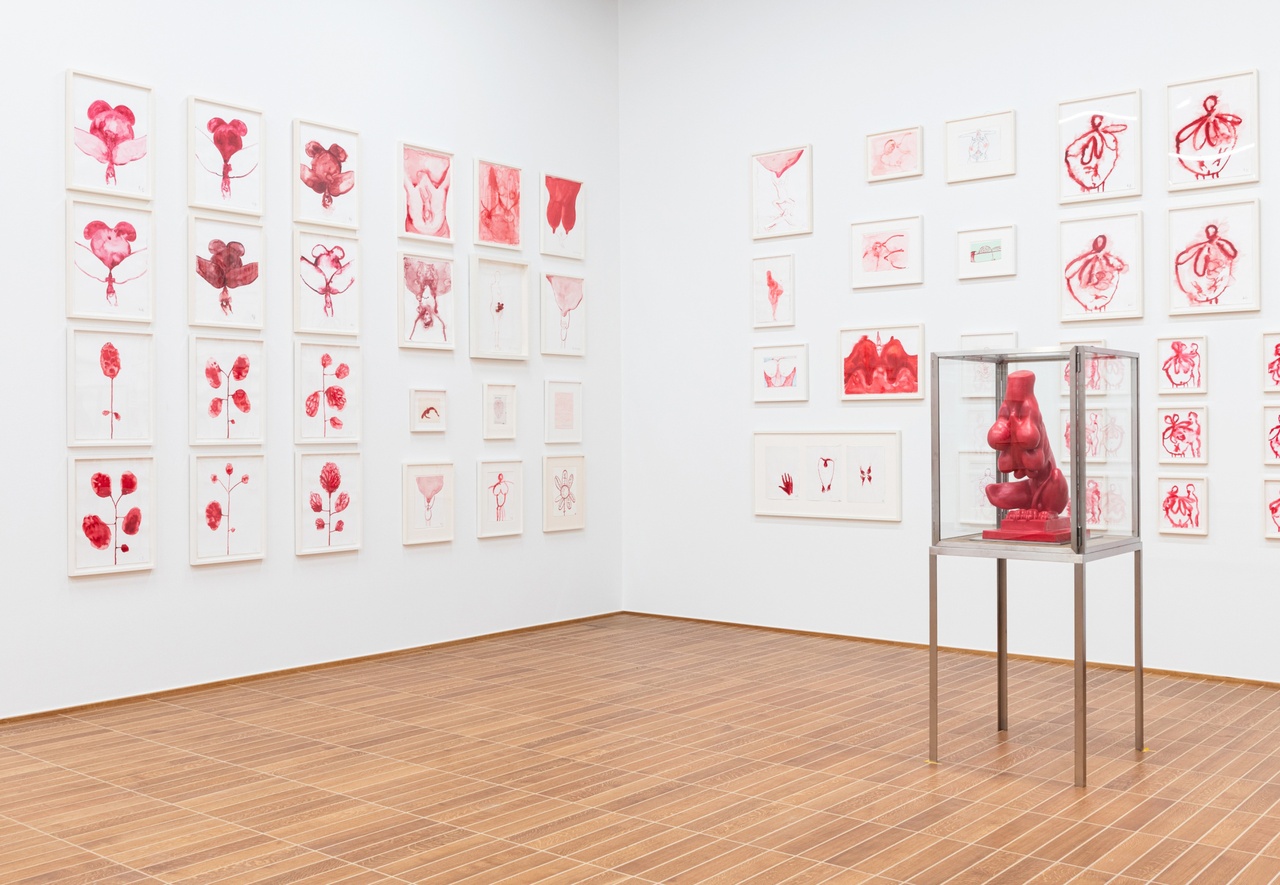 The artist-as-curator is a relatively new phenomenon. It can be argued to be a symptom of an increasingly deskilled profession – everyone, it seems, is a curator these days. However, an artist often offers a perspective no professional curator could – not necessarily because the professional curator couldn’t, but because the institutional rules fall away, at least somewhat, for the artist-curator. In a current exhibition in Basel, Jenny Holzer assumed the role of curator to Louise Bourgeois in what the museum declares “an unprecedented encounter between two giants of American art.” Art historian and critic Jules Pelta Feldman visited the exhibition and assesses this artistic exchange.

I am haunted by a work by Jenny Holzer from 1982, a small, easy-to-overlook bronze plaque from her Living series. It reads “MORE PEOPLE WILL BE BUILDING HIDING PLACES IN THEIR HOMES, SMALL REFUGES THAT ARE UNDETECTABLE EXCEPT BY SOPHISTICATED DEVICES.” In the collection of the Allen Memorial Art Museum at Oberlin College in Ohio, the work is displayed near the doorway of a still, dark, wood-paneled gallery that holds vitrines of medieval relics, miniature sculptures, and porcelain bowls. Seeming to belong to these hushed and elegant surroundings – the format resembles a placard thanking a bygone philanthropist – Holzer’s piece thoroughly unsettles the air of elegant and staid stability that otherwise reigns here. From what accursed wormhole does this matter-of-fact sentence emerge? Or ¬– a much more frightening prospect – is it somehow this universe, the one I live in, that Holzer describes?

The Kunstmuseum Basel’s current exhibition may include Jenny Holzer’s name in its title – “Bourgeois x Holzer,” like a sneaker collab – but it is devoted to the work of Louise Bourgeois, a friend of Holzer’s. Here, Holzer has here taken on a curatorial role in selecting and arranging works for the show. Like Holzer’s, Bourgeois’s work exploits unsettling ambiguities. Her darkly surreal sculptures and installations are at once recognizably of this world and frighteningly outside it; they seem to emerge both from another dimension and from our own bad dreams. In the exhibition, a few works have infiltrated the museum’s historical galleries, where they both camouflage themselves as and subvert more traditional works of art, much like Holzer’s bronze plaque at the Allen. One of them is a large bronze, Avenza Revisited II, a loose-limbed, faceless brood that liquidly stalks a gallery of figurative paintings like modernism’s id.

Holzer’s career has primarily consisted of writing, whether printed on posters, flashing across LED panels, engraved into marble benches, or emblazoned on pencils, T-shirts, and the like. Her best-known series is the Truisms, begun in 1977, which are equal parts pithy and unnerving: “A LITTLE KNOWLEDGE CAN GO A LONG WAY,” or “BAD INTENTIONS CAN YIELD GOOD RESULTS.” The odd contextlessness of these and later series of sayings – who is speaking, about what, to whom? – both heightens their air of disconcerting ambiguity and allows them to shapeshift into different material forms, which also inflect their meaning. 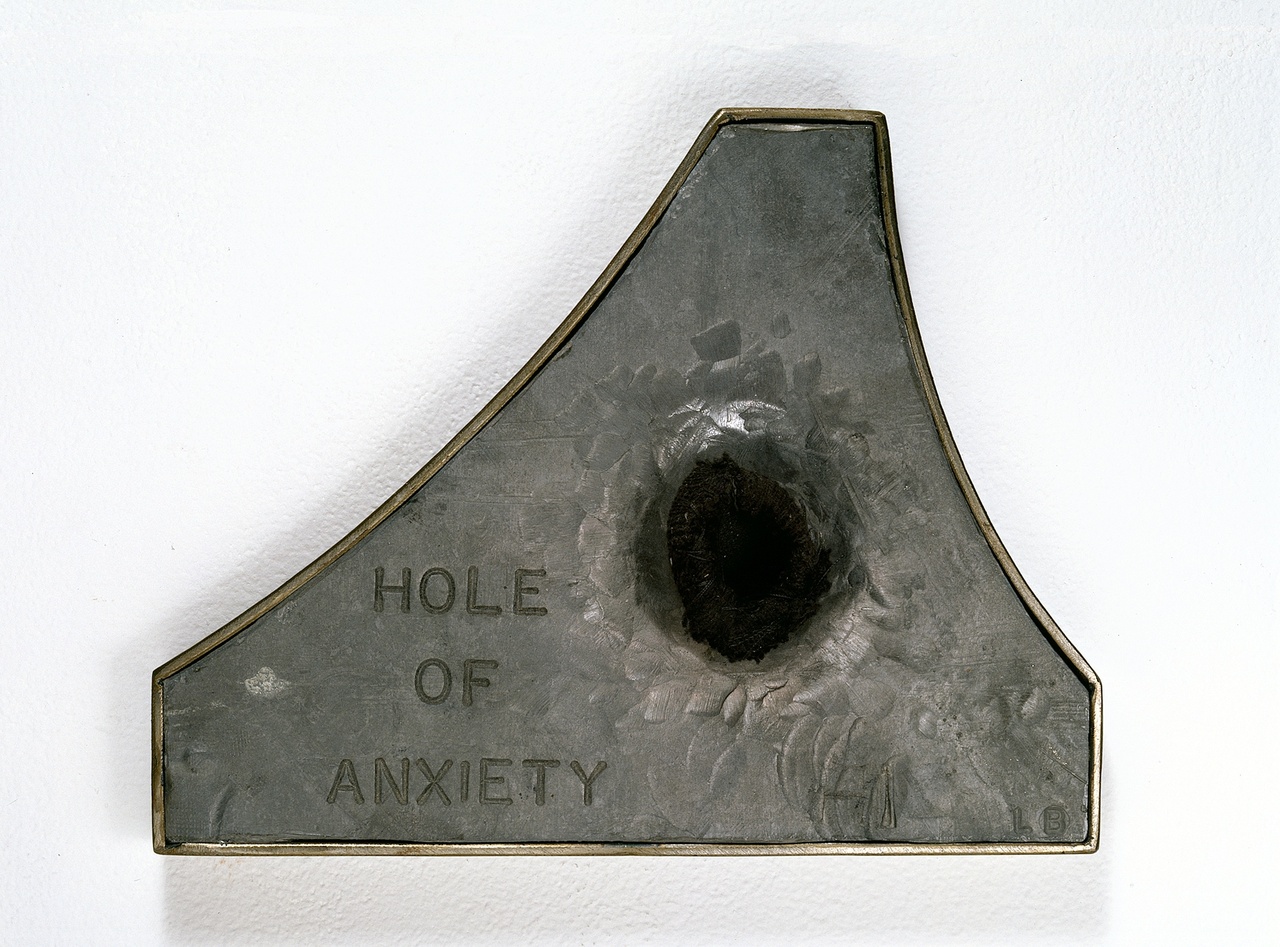 Bourgeois is acknowledged as a master of abstract sculpture and installation, but text has always played a role in her long career, which began in the 1940s and only ended with her death, at the age of 98, in 2010. If Holzer exploits the unmoored and impersonal, Bourgeois plumbs themes that, while general, are rooted in her own life: the relationship between parent and child, sexuality fraught with Freudian anxiety, and the stifling bonds – corporeal, psychological, role-based – that constrain women. One page of her wonderfully weird 1947 booklet He Disappeared into Complete Silence, which pairs brief, bizarre narratives with person-like architectural forms, begins its story with “Once there was the mother of a son. She loved him with a complete devotion” and ends it thus: “Later on she died but he did not know it.”

These vignettes, like vicious little fairy tales, are delicious, and Holzer’s pairings intensify their savor. But Bourgeois’s later uses of text, on which the exhibition focuses, strike me as tepid in comparison with the mute power of her sculpture. I suppose the repeated phrase “I love you. Do you love me?” is meant to summon the hunger, need, and cruel rejection that sometimes characterize familial bonds, but it does so much less vividly and originally than Bourgeois’s thrilling, menacing objects do. In an untitled sculpture from 1977, a woman’s soiled gingham housedress – or is it the frock of a child? – hangs from an inverted broom, so that the worn yet spiky bristles constitute the figure’s shoulders. Plastered onto the end of the broom’s handle is the form of a tiny human foot, a crude and fragile base for a figure so buffeted by the ceaseless demands of family life. This minimal mannequin has no head; she cannot speak. Nonetheless she expresses much more than all the swirling text around her. 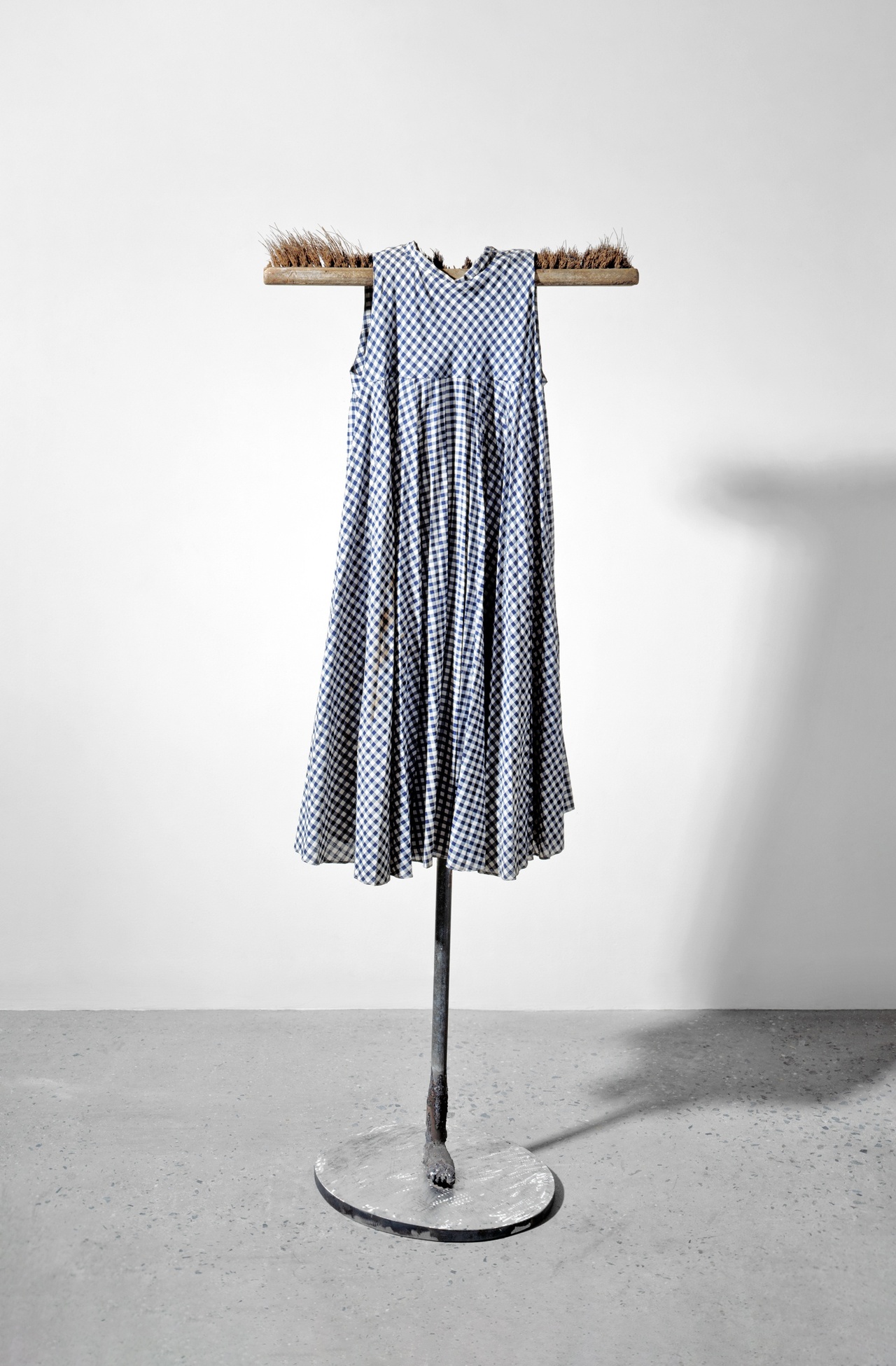 Holzer’s groupings of Bourgeois’s work – mostly works on paper, but also including sculptures, a few textile pieces, a major installation, and even a bit of augmented reality via a smartphone app – generally reflect visual or textual correspondences rather than any chronological or thematic order. This is hardly unheard-of, especially in an exhibition of contemporary art, but it is nonetheless a reminder that artists often care about – and see ¬– different things in works of art than curators and critics do.

Here, however, looking also means reading, as Holzer has focused primarily on works that include text, whether mysterious scribblings on sheets of A4, large works on paper that combine text and image, or vaguely Holzer-esque aphorisms (“I had a flashback of something that never existed”) that recur in handwritten and printed variations. Yet while Holzer asks us to focus on Bourgeois’s use of writing, I consistently found her visual and material juxtapositions more powerful than these textual relationships, which felt pale and unsatisfying in comparison to Hozler’s own sucker-punch Truisms. If Holzer’s texts tend to widen the horizons of meaning, Bourgeois’s seem to shrink them.

Aside from a brief introductory text, the works, which span Bourgeois’s career but are heavily drawn from its later years, are presented not only without written interpretation, but even without the “tombstone” information – title, date, medium – customarily provided in art museums. It is possible to look up this information – by matching the numbered list of works given in an accompanying booklet to small diagrams printed on the walls, which seemed almost deliberately hidden – but it is not easy. Several times, I failed to find in these diagrams the shape of a particular work, and so was unable to look up its title. But, truth be told, I didn’t really care. It is a rare pleasure to experience art this way, to be given permission to skip ancillary texts and just look – or, well, read. 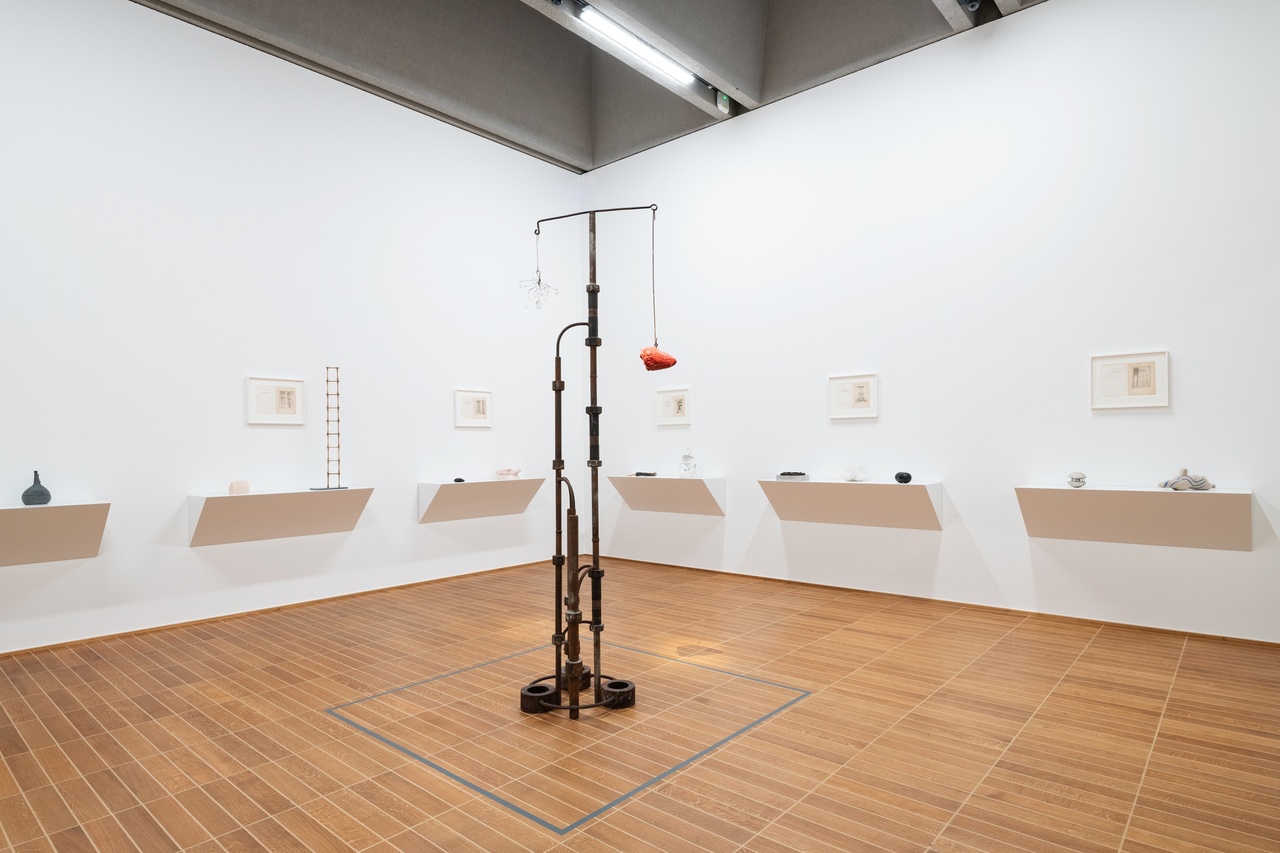 Foregrounding text, Holzer has arranged lyrical combinations that complement the surrealist spirit of Bourgeois’s own juxtapositions. The first room pairs pages from He Disappeared into Complete Silence with small, cryptic sculptures in varied materials. These rebus-like assemblages encourage us to read Bourgeois’s pieces as elements of language. As if to suggest the equivalency of sculpture and text, a grid of framed pages covered with sketches and writing is interrupted by one of Bourgeois’s small objects – a palm-sized, teardrop-shaped thing bristling with nails. This first room promises an extension of Bourgeois’s sculptural practice through attention to her writing, but in most of the exhibition, I found the text to constrain and flatten her otherwise rich meanings, which spread like stains – especially in contrast to the generative openness of Holzer’s ambiguity.

In general, the sculptures are simply superior to – visually, thematically, and materially more interesting than – the works on paper. But what is decisive here is something more fundamental: the sculptures’ power is partly the way they lie beyond language – their terrifying not-quite-abstraction, the way they limn repressed traumas and suspected terrors without ever casting a light into the corners where such things scurry. Bourgeois’s work conjures nameless, yet creepingly familiar, horrors – around motherhood, family, the bewilderment of living in a human body. And nameless horrors do not gain potency when they are named. 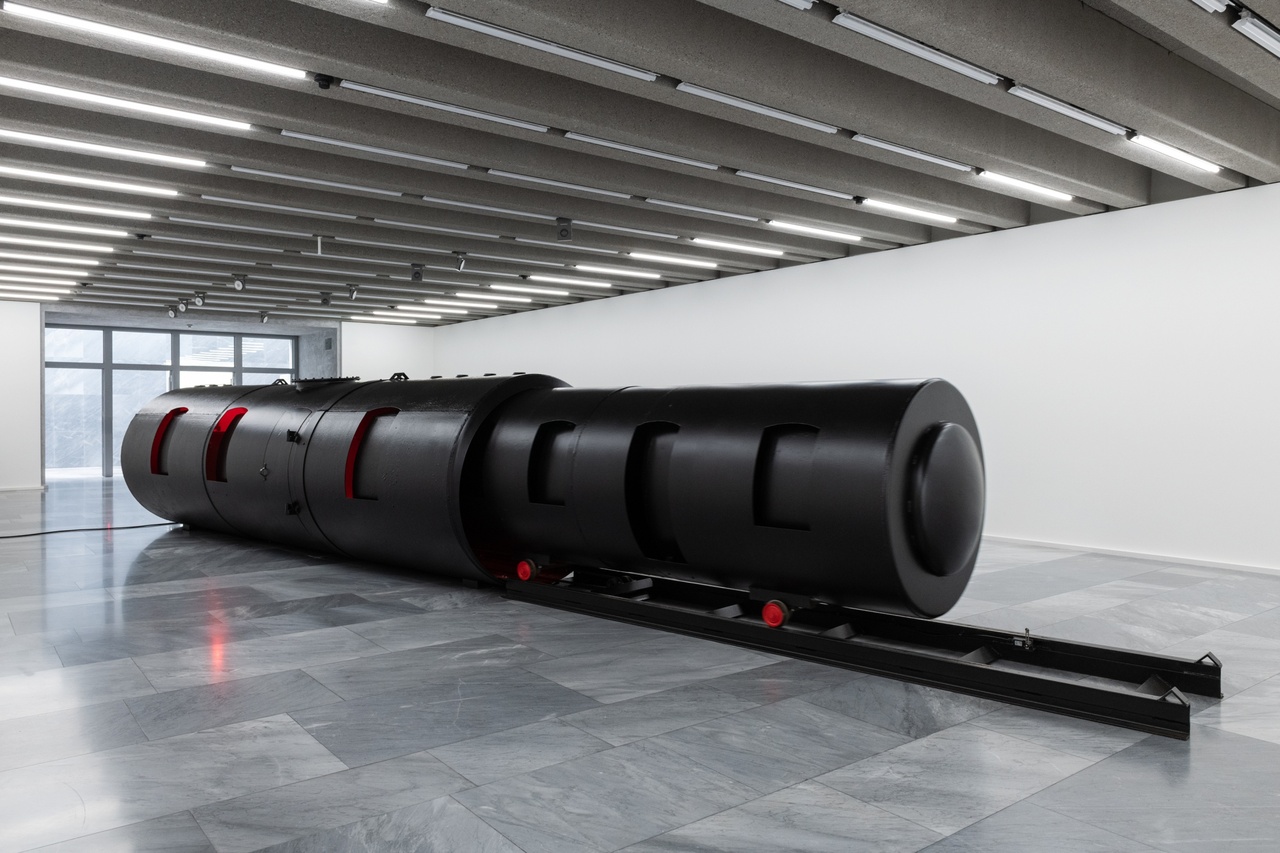 Ultimately I remain convinced that Bourgeois’s most powerful works do not use language; they defy it. Down in the basement level of the Kunstmuseum’s modern addition is the exhibition’s largest piece, Twosome, from 1991. A surrealist objet ambigu in the outsize scale of a ’90s installation, it is difficult to describe. One’s first impression is of a train’s tank car – a heavy, matte-black cylinder before tracks – but no, the movement is not back and forth, but in and out. A smaller cylinder is fitted into this one and extends slowly and inevitably out onto the tracks, and then back inside it, accompanied by flashes of red light and a dull mechanical hum. The heavy-handed sexual metaphor is blurred by the work’s architectural details: there are strange, blind windows through which one can just glimpse the red paint of the interior. The scale is odd; though it dwarfs the viewer, it is nonetheless smaller than it should be, not quite human-sized. The thing, though ostensibly a variant of a familiar human object, is somehow beyond the realm of the rational – beyond language. Here, as in the best of Bourgeois’s work, words fail.

“Louise Bourgeois x Jenny Holzer: The Violence of Handwriting Across a Page,” Kunstmuseum Basel, February 19–May 15, 2022.

Jules Pelta Feldman is an art historian, critic, curator, archivist, and salonnière. They are postdoctoral research fellow for the SNSF project “Performance: Conservation, Materiality, Knowledge” at the University of the Arts, Bern. They are based in Basel.