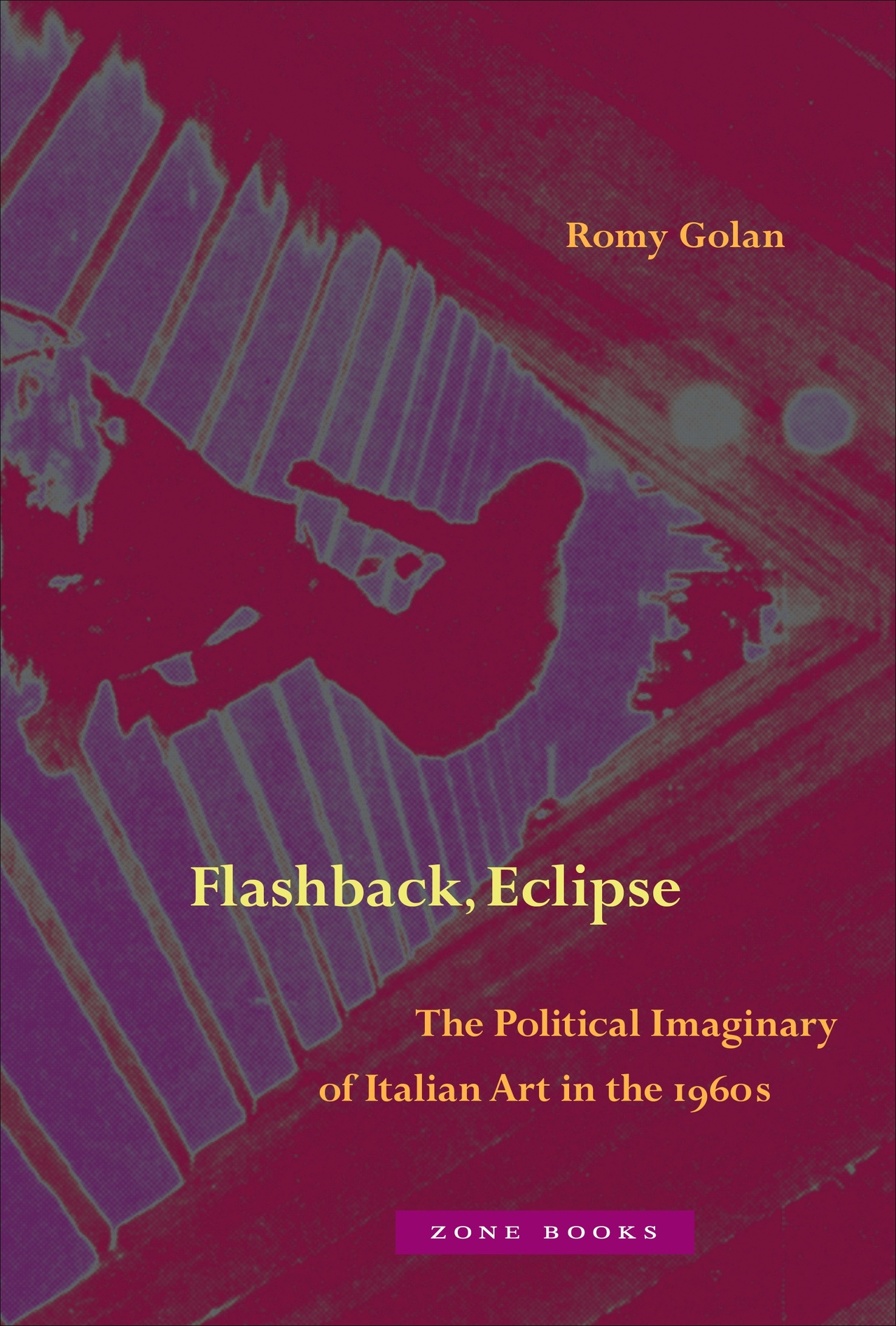 Romy Golan’s recent book on Italian art in the 1960s arrived concurrently with renewed international attention to figures from Italy’s postwar scene such as Carla Lonzi and Laura Grisi. Rigorously engaging the archive, Golan constructs an original rereading of artistic production in this moment in Italy; as art historian and critic Tom Donough characterizes it here, the book is an immersion into the historical strata of images that constitute something like a social archive of Italian visual memory. Golan is an expert diver, Donough writes, bringing unexpected associations and resonances back to the surface and exposing the persistence of various historical pasts in what many had taken to be our perpetual present.

In her 2004 book Chronophobia, Pamela M. Lee diagnosed a persistent “fear of the temporal” in a wide range of art produced through the 1960s, a fear whose symptoms had manifested as “the will of both artists and critics to master [time’s] passage, to still its acceleration, or to give form to its changing conditions.” [1] Linked to the advent of what was then termed “post-industrial society” – the growing tertiarization of labor and the rise of cybernetic capitalism – this ambient chronophobia had registered as a widespread sense of becoming unmoored from history and its explanatory frameworks. Lee concluded with an analysis of works by two artists that paradigmatically encapsulated this condition, this entrapment in a perpetual present: Andy Warhol’s durational films, most famously his eight-hour-plus Empire (1964), and On Kawara’s Today series, the date paintings he had begun in 1966. At the same moment that Lee was defining this fall out of time, historian François Hartog was reflecting on contemporary presentism in his Regimes of Historicity; when he described “the sense that only the present exists, a present characterized at once by the tyranny of the instant and by the treadmill of an unending now,” he could just as well have been speaking of these two artists and of this same anxiety around temporality. [2] Romy Golan’s new book, Flashback, Eclipse: The Political Imaginary of Italian Art in the 1960s, sets out to counter the valorization of the immediate attendant to chronophobia, this omnipresence of the present, in a startlingly original reading of episodes in Italian art of the 1960s.

It is a time and place that has received significant scholarly attention over the last 15 years or more, so much so that it might fairly be characterized as one of the most dynamic areas in art historical and curatorial research in the postwar era. However, the vast majority of that work has sought to place Italian art firmly within its present, admiring artists who insisted on a tabula rasa of the past and on a complex engagement with the growing radical politics of those years. [3] But readers of Flashback, Eclipse will find little mention of Arte povera and even less of the student protests of ’68, the subsequent “hot autumn” of 1969–70, and the advent of that state of emergency that would characterize much of the following decade. Instead, across three chapters, readers are subject to a profound defamiliarization of this moment as Golan articulates an authentically political immaginario operating as a series of temporal dislocations in the art of the Italian ’60s. These dislocations take the form of what she calls “flashback” – an “intervention of the past in the present flow of a narrative,” revealing “something that has been omitted” – and “eclipse,” the obscuring of one moment by another, which instead reveals “by omission.” [4] These are both figures for a decidedly nonlinear temporality, in which one historical moment may be folded over or under another, experienced precisely as the revelation or occlusion of an image. In fact, one could characterize Flashback, Eclipse as an immersion into the historical strata of images that constitute something like a social archive of Italian visual memory. An expert diver, Golan brings unexpected associations and resonances back to the surface, exposing the persistence of various historical pasts in what many had taken to be our perpetual present.

Concretely, Golan is concerned with three specific moments: that of Michelangelo Pistoletto’s Quadri specchianti (Mirror paintings) of the early 1960s; of Campo urbano (Urban field), a one-day “happening” held in the historic center of the northern Italian city of Como late in the summer of 1969; and of Vitalità del negativo nell’arte italiana 1960/70 (Vitality of the negative in Italian art 1960/70), an exhibition organized by a young Achille Bonito Oliva that opened late in 1970. But to describe this as a book about artworks, actions, and exhibitions would be misleading, or at the very least would miss what is so original about Golan’s study – namely, the way all of these manifestations are accessed through photographic archives, whether in the pages of Domus, then the most influential Italian art monthly; a photobook published as documentation of ephemeral urban “aesthetic interventions”; or installation shots by noted photographer Ugo Mulas recording the scenography of an exhibition. Such photographs produce something like an image bank for Golan, into which she can delve in order to uncover the diverse operations of flashback and eclipse – themselves perhaps variations of the more familiar structures of metaphor and metonymy – which ramify outward in ever-widening circles of association.

For instance, Pistoletto’s Alpino (Alpine soldier, 1962) could “flash back” ambiguously to both the Futurists’ service in this corps of mountain infantry during the First World War and to the Alpini partisans who liberated Turin from the Germans in 1945. But when photographed in a group show of Pop art in 1965 – with Roy Lichtenstein’s Whaam! (1963) reflected in its mirrored surface and a laughing Pistoletto caught standing in front of it – it could be seen to “eclipse” the US Pop art that was widely understood to be invading Western Europe at this time (pp. 72–79). As with the mirror paintings, which Golan largely reads through historical reproductions that capture the reflections found on their surfaces – reflections that now tend to be digitally edited out of illustrations – Campo urbano is seen through the pages of the photobook produced in its aftermath, a collaboration between critic Luciano Caramel, the photographer Mulas, and designer Bruno Munari. Here, artists’ ludic transformations of Como’s city center recall pasts both recent – the demonstrations of spring and summer 1968 in Paris and elsewhere, which transformed functionalist cities into spaces of play and protest – and more distant, such as the 1921 Dada visit to the church of Saint-Julien-le-Pauvre in Paris, led by André Breton (pp. 118–46). However, this one-day event in 1969 was also an attempt to occlude what is certainly the best-known monument in Como, the Casa del Fascio of 1936, designed by Giuseppe Terragni in a stripped-down Rationalist modernism. Located only a five-minute stroll away from the main location of the day’s events, the Casa was at once unavoidable and unavowable, a past that had to be suppressed (pp. 158–69). These legacies of Fascism loomed over Bonito Oliva’s 1970 exhibition as well, held as it was in the grandiose – if at the time somewhat rundown – halls of Rome’s Palazzo delle Esposizioni. The building, designed in a Beaux-Arts neoclassicism, dates to the late 19th-century moment of Italy’s unification, but it was its history during Mussolini’s ventennio, when it was for a time clad in a severe geometric envelope, that was both evoked and revoked by Vitalità del negativo. Golan cleverly reads the exhibition’s entry space, defined by intersecting horizontal Xs of black ribbon weaving just above visitors’ heads – the work of architect Piero Sartogo, charged with the Vitalità’s installation – as a deposing of the grand X that had stood on the Palazzo’s façade during the Mostra della Rivoluzione Fascista, held from 1932 to 1934 to commemorate the tenth anniversary of the Fascist revolution (pp. 215–17).

Admittedly, not every flashback or eclipse proves equally convincing. Golan has a tendency to compare photographs – of the reflections in Pistoletto’s mirror paintings, of visitors to Bonito Oliva’s exhibition – to frames from contemporaneous Italian films by Michelangelo Antonioni and Bernardo Bertolucci, in which the associations can at times come across as fortuitous, if not entirely arbitrary. This is where her method reveals its potential weakness: it is the historian who constructs these temporal dislocations, and it is as much her imaginary as that of her subjects that is at play in these readings. If Golan’s “political imaginary” is not the political unconscious of Fredric Jameson, for example, with its careful allegorical exegesis, one might better compare it with Aby Warburg at his most vertiginous, and indeed a two-page spread of his Mnemosyne Atlas occupies almost the exact center of Golan’s book (pp. 156–57). Warburg’s “pathos formulas” find their parallel here in what one might call Golan’s “heterochronic formulas,” images that enfold different times and, in challenging our ambient presentism, compel us to recognize a Gleichzeitigkeit des Ungleichzeitigen – a Blochian simultaneity of the non-simultaneous – at work in the Italy of the economic miracle. Flashback, Eclipse’s originality, its real insight, lies there, in its insistence that one image might hide another, that the artwork’s time is never singular, that the perpetual present is in fact porous to multiple pasts that continually seep in.

Tom McDonough is a critic and art historian at Binghamton University. His Sowing the Wind: Stories from the Situationist International is forthcoming from Reaktion Press.