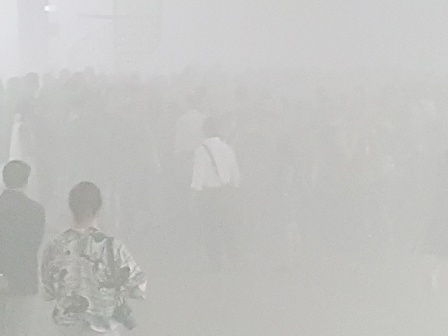 Anne Imhof’s performances are characteristically stark: a few key props, a few key performers, a bare venue. But in the years since her earliest iterations of “concert for dancers” at Real Fine Arts, New York, in 2011, one element has exponentially grown: her audience, which is to say not just those who now follow her work, but those who seek to physically experience it, and in turn, lend their bodies as material for each piece. In the wake of “Angst II,” Imhof’s massive (and massively attended) performance at Berlin’s Hamburger Bahnhof this fall, critic Gaby Tront explores Imhof’s aesthetic-scape of adolescent nihilism as well as its popular draw. 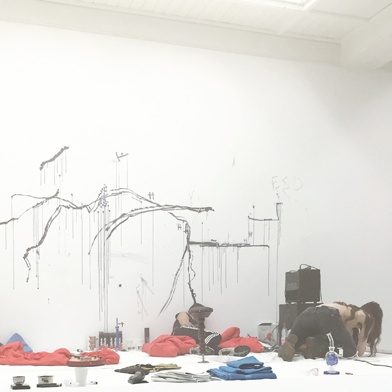 But unlike Berghain, everyone gets in: 10,000 square meters of Gallery Weekend art-event consumers (myself included) and their tote bags; this isn’t a club, this is club coding for a mainstream public art work. Considering her title, and the (re)production of a diffuse scenario of threat, one could call it populist. Regardless, Imhof is perhaps the first Großkünstlerin to come out of Germany in a decade; the recent reception of her work (further underwritten by Imhof’s representating Germany at the upcoming Venice Biennale) suggesting her practice has the iconic potential of Eliasson, Tillmans, and Genzken. This achievement of holding viewers’ attention (albeit by employing the common tricks of celebrity and beautiful youth, even if via her own circle of friends and their non-gender conformity) for a sustained period is not nothing. And if such a feat was notable at the time of Barney’s “Cremaster,” it is all the more compelling now, given the incredible competition one must fight to even be seen, let alone sought out in today’s attention economy. 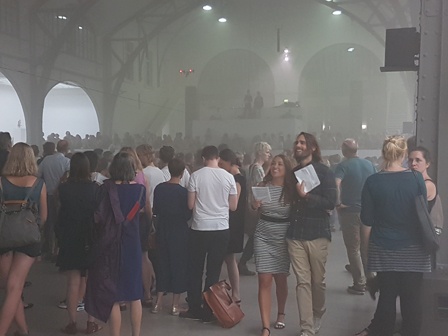 One might be tempted to read this as a relational (or anti-relational) art strategy – as the viewer, in the accumulation of fog and slight terror that comes with being one among such a mass of bodies, is certainly conscious of their presence. But unlike the common goal in relational art, “Angst” neither problematizes the viewer’s position as part of the masses nor aims to mobilize this group at large; As aforementioned, the piece is fully tolerant of passivity; there is no ’dead weight.’

In canonical accounts of performance art, a central medium for feminist discourse, the potential for interactivity was highly valued. The possibility of empowering both the performers (who might just act ’off-script’ or at least in an anti-representational way) and the audience members (who, at any moment, could directly interfere with what was going on) promised disruption of social norms and presented a two-channel narrative rather than a unidirectional stream. But such a vocabulary of empowerment is no longer trusted, thanks, for one, to its overuse in commercial language (not least, the ad copy of zombie-consumer feminism). Moreover, and as has been broadly expressed in theory of the past decade, interactivity has come to stand in as a medium of unremunerated labor, so that it no longer holds the political promise the Judson Church sphere took it to possess. But here, that’s of little matter as Imhof did not ask for it anyway. Rather, she created a scenario wherein a common public was cohered through the incredibly simple – and in Imhof’s case incredibly beautifully executed – reflex of sharing an emotional state. 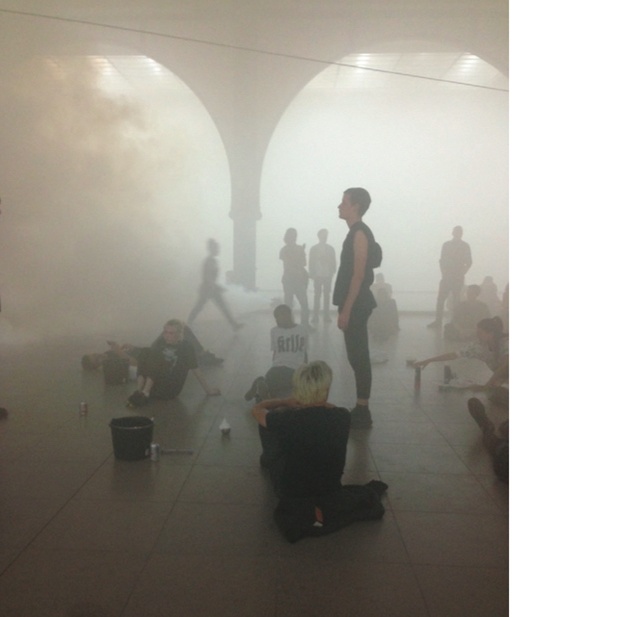