This March issue of Texte zur Kunst is dedicated to comedy understood as the humorous grappling with experiences of crisis. In addition to thinking about the comedic in art, it also considers mass-media formats such as TV series and movies. As early as antiquity, and especially with the emergence of commedia dell’arte in the 16th century, comedy has been a source of consolation, providing relief from the drudgery of daily life as well as from the anxiety, exploitation, and discrimination that are often part of it. By treating tragedy with humor and being dead serious about it, comedy can serve as a catalyst for both the political unconscious and for that which is all too painfully conscious. Thus, some of the most celebrated comedies of the 20th century draw directly on the tragedy of some social reality against which jokes, slapstick, and the grotesque act as a kind of utopian litmus test: see Charlie Chaplin’s anti-Hitler satire The Great Dictator, or Stanley Kubrick’s parodic meditation on the nuclear menace in Dr. Strangelove. These and other such comedies are utopian in that they don’t articulate the contentious politics of representation – the question of who is the butt of the joke – through an exaggeration of stereotypical ideas and clichés about the oppressed (as in blackface or slut-shaming); crucially, they clearly mark otherwise unmarked subjectivities (e.g., white, heterosexual, middle-class people, or a recurring comedic character like the Catholic priest). Yet if the embodiment of universally recognizable categories was long characteristic of the narratives that defined comedy as a genre, the central feature of today’s internet slapstick is social media users crafting something universal out of their own peculiarities. What makes many TikTok videos funny, for example, is often not so much that someone is embodying a particular role, one which is embedded in the narrative of the gag, but that someone is (or believes they are) unusually good at something.

Comedic devices like wit and irony have a long tradition in visual art. From the absurd drolleries in Pieter Bruegel’s village scenes to Richard Prince’s joke paintings and Nicole Eisenman’s overdrawn, caricature-like figures to more recent work employing the comedic, such as Mickalene Thomas’s video installations – comedy and art have historically maintained close ties. However, at a time when audiences increasingly demand political commitments and authenticity from art, comedic speech, which is inherently disingenuous, has fallen into disrepute: ironically distanced rhetoric is accused of turning a blind eye to social inequality, of lobbying for what looks suspiciously like a cynical reproduction of the status quo. The apparent unconcern with social conditions becomes flagrant when, in addressing a difficult political issue, a speaker courts shared derision of a figure like Donald Trump out of the sole desire for consensus or, more precisely, for unanimous agreement achieved through negating the other side’s position, instead of devising conditions for possible alternatives. With this in mind, we invited Lauren Berlant, Sianne Ngai, and Alenka Zupančič to a roundtable discussion, moderated by the editors, to probe the relationship between the comedic and the political with concern for representation. One key thesis that developed in their exchange is that, precisely because comedy pokes fun at explanatory models that make the world look coherent, the social “we” it produces is contentious. The question of comedy (also as the antidote to tragedy) thus hinges on the possibility or impossibility of a “we” – on the question of the locus of society.

A similar relational conception of the social is manifested in writer and critic Lynne Tillman’s five short stories. Miniatures of absurd scenes from everyday life, Tillman’s stories lack plots in the conventional sense, but they always pack a punch. Comedy, here, emerges from the bitter laconism with which Tillman renders the misunderstandings and inadequacies that doom her characters’ relationships to failure. The psychosocial facets of humor, namely, the inclusionary and exclusionary mechanisms of the group dynamics it fuels, are also a central concern in the media theorist Lukas Foerster’s contribution. Through the US series Seinfeld, Foerster sketches the history of a comedic subgenre: the sitcom. What continues to set Seinfeld apart from other sitcoms, he argues, is that it constructs a world of its own, insulated against the achievement-oriented society’s overwhelming demands. Meanwhile, How To with John Wilson stands out among today’s series: roaming the streets of New York, filmmaker John Wilson captures a seemingly endless flow of images replete with moments of usually involuntary slapstick humor in public settings. What at first looks like a standard social media feed is actually a deft throwback to 1960s experimental film, as Kevin B. Lee elucidates in his essay.

Analyzing some of the most successful comedies in recent years, Bert Rebhandl argues that such a loop of corny jokes, with the potential for infinite recombination, strains the limits of comedy if it merely juxtaposes the oppressive concreteness of the tragic with a possible retreat into individuality. The politics of difference those films invoke, occasionally to the point of racist caricature, has exactly the opposite effect in Richard Pryor’s stand-up and Glenn Ligon’s and Martine Syms’s artistic practices. As the art historian Jennifer Greenhill demonstrates, their comedy is not exhausted in the finality of the laughter elicited by a punchline, but rather it arises precisely from the discrepancy between a loose narrative and the dramatic reality of unrelenting, pernicious racism. This underscoring of the procedural has also been a prominent feature in Andrea Fraser’s work, as Gregory H. Williams illustrates. Fraser’s performance Kunst muss hängen (Art must hang) takes its title from a remark made to Fraser by Martin Kippenberger, an old master of the (off-color) artist joke, and Fraser’s performance parodies the jocular speeches ­Kippenberger would deliver at exhibition openings. What may be read as a feminist appropriation of patriarchal gestures in the art world also suggests the existence of geographic variations in humor (in this instance, Kippenberger’s Germany vs. Fraser’s US). Perhaps because of Germany’s recent history – National Socialism, the Cold War – its people are not ordinarily credited with a particular gift for humor. What Matthias Dell notes in his essay on Jan Böhmermann – that entertainment formats like Böhmermann’s late-night show can be dependable sources of information on par with classic news media – may well be the height of German comedy.

At a time when the political is often read entirely in satirical terms, to what extent does comedy provide an all too easy escape from, rather than actually address, the long-term challenges that various crises pose? This question can serve to frame a reading of the texts presented here. 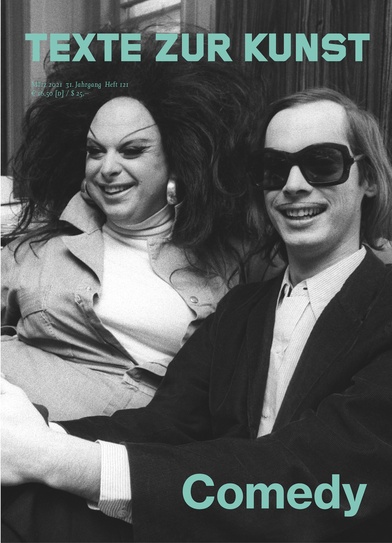