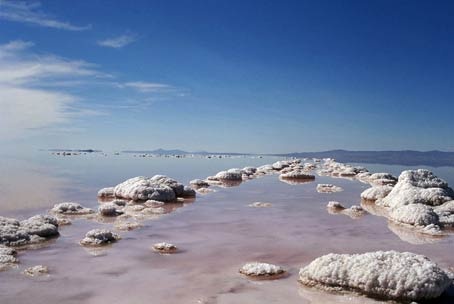 "I think that the best thing you can say about museums is that they really are nullifying in regard to action… A museum devoted to different kinds of emptiness could be developed. The emptiness could be defined by the actual installation of art. Installations should empty rooms, not fill them." — Robert Smithson (1967) [A1]

These remarks on museums by the late American artist Robert Smithson were illustrated with a juxtaposition, among others, of Marcel Breuer's Whitney Museum of American Art and the Mausoleum for Lenin. Unlike Theodor Adorno's critical thoughts on the kinship of museums and mausoleums in his "Valéry Proust Museum," Smithson found their shared ground inspiring. If, close to forty years later, said museum staged a major Smithson retrospective, one might expect some reflection on its own appearance in his writing, and, by extension, on the resonance of Smithson's work in the institution of the museum. After all the terms the artist used to describe what he considered interesting about the museum — nullifying and emptiness — do map onto the most elusive yet central concepts in his work and writings — entropy and non-sites. The Whitney missed an opportunity. Instead, the show was "nullifying" by accident; its hodge-podge arrangement of far too many works left no space for "emptiness."

Smithson coined the term "non-site" for his art works that visualized absence, that referred in a condensed and abstract manner to outdoor sites that were somewhere else and were not the type of attractive destinations one might expect. Non-Site (Oberhausen, Germany) of 1968 displayed slag collected in the Ruhr Area which the artist had toured with Bernd Becher in five steel bins and accompanied by five maps and five photographs each indicating the exact sources of this waste material from the steel refining process. With this and other non-sites arranged along different axes and crammed into a single gallery among other types of works, they lacked the presence they need to suggest the absence of the sites they refer to. A selection of non-sites could have been limited to those where rough specimen like grey slag or basalt inadvertently enter a dialogue with Breuer's polished but still somewhat textured floor made of bluestone quarried near the Hudson River. That dialogue could have identified the place of the museum in the contrast of nature and artifice essential to the non-sites.

For Smithson the polymath "entropy" was drawn from the Second Law of Thermodynamics and meant a loss of energy and a process of dedifferentiation that articulated itself in perception and the mind, in contemporary art and the world at large: in the Minimalists' "New Monuments," for example, with their "new consciousness of the vapid and the dull" where "past and future are placed into an objective present," or in blackouts that preview "the ultimate future [where] the whole universe will burn out and be transformed into an all-encompassing sameness." [A2] Smithson's iconic land art work Spiral Jetty performs entropy, from the visitor's counterclockwise movement, marked by disorienting, constant shifts of perspective, to its location in Utah's Great Salt Lake, near an abandoned oil jetty and prone to overgrowth by salt crystals with their spiraling growth patterns on a molecular scale. How to represent this canonical land art work in the context of a museum survey? This admittedly difficult question was too easily answered with too many casual drawings and still photographs referring to the film Smithson made about his jetty. Easily consumed, these somewhat traditional works on paper ended up detracting visitors from viewing that very film which functions as a museum-suitable quasi-non-site to Spiral Jetty. Heavily framed, they also evaded the questions about change and passing time that Spiral Jetty posits to museums and their mission to collect and preserve.

At his best, Smithson intertwined entropy and non-sites, for example in the confusion of reality and illusion at the heart of the artist's knack for reflective surfaces. In the Mirror Displacement photographs and objects, mirrors blend with and rupture their surroundings. Meta-Minimalist objects from the mid-sixties confound in similar ways. Rarely exhibited and rarely reproduced in color, they formed a definite highlight of the show. With their plastic mirrors in period Hi-Fi colors set into crystalline-shaped, steel frameworks, these works mingle reflections of their surroundings with reflections of themselves; they mingle references to never-changing microscopic nature with ever-changing palettes of culture. As such, they reveal the tensions that slipped into Minimalism and Color-Field painting only through the back door. Not surprisingly, it was Smithson who first wrote in detail about Donald Judd's industrial materials — "Rohm-Haas ‘glowing' pink plexiglass," "Lavax Wrinkle Finish," surfaces ranging from "Saturnian orchid-plus to wrinkle-textured blues and greens — alchemy from the year 2000." And it was Smithson who insisted on the "impure-purist surface" in Frank Stella's paintings, an "exacerbated, gorgeous color [that] gives a chilling bite to the purist context." [A3]

Towards the end of the show's run, a completely new Smithson work was launched to circumnavigate the island of Manhattan for a week. Floating Island was born from his wonderfully whimsical 1970 drawing with inscriptions of a "TUG" boat in front of the "N.Y.C. SKYLINE" pulling a "BARGE" with "TREES COMMON TO N.Y. REGION," such as a "weeping willow," surrounded by "EARTH," "ROCK," "MOSS," "BUSHES," and a "PATH." It is tempting to include Floating Island among those works by Smithson which mobilize entropy and non-sites, visually and conceptually, spatially and temporally. To begin with, there is an island circling an island, enacting the play with periphery and center, boundaries and openness that made the artist return repeatedly to islands in various forms. Next, an island referring to an island, or more specifically, an artificially created island of nature referring to Manhattan, a naturally created island turned artifice. Then, an island referring to an island on an island, that is, a small island park revolving literally and metaphorically around Central Park, a rather large island park amid Manhattan island where materials for the work came from. And finally, paying tribute to Smithson's passion for time warps, art historian Robert Hobbs, more than twenty years before Floating Island was eventually made, put his finger on a temporal twist. "Instead of viewing Manhattan from the water, New Yorkers could see a restaged bit of their island as it used to be, floating by them. The past would, then, become the tourist viewing the present—a new twist to the Site/Nonsite dialectic." [A4]

But is that really what Floating Island is about when realized in the context of a major museum show in 2005? Or rather, what it would have been about had Smithson himself been able to make it, today, or back in 1970, when he was unsuccessful in proposing the project to the New York Institute for Arts and Urban Resources? Significant decisions were left to be made for the Whitney and its collaborators, Smithson's widow the artist Nancy Holt and the non-profit public arts organization Minetta Brook: What size should boat and barge be and what scale in relation to the skyline? What kind of tug boat, what color, what brand, what year? How closely should the island travel to the coastline? How fast and how long should it travel? Perhaps these are questions of conservative connoisseurship that would have amused Smithson. However, he may have had concerns regarding other decisions, such as changing the intended route. Whereas the Floating Island in pencil travels across the paper from right to left and was meant "TO TRAVEL AROUND MANHATTAN ISLAND," its three-dimensional offspring moved back and forth in a U-shape due to short-term security for a meeting of the United Nations located directly on the East River. The decision was also made to announce suitable viewing locations with approximate times for catching sight of the work — Battery Park City 9.30am and 3.30pm, South Street Seaport 10.30am and 3pm, etc. [A5] Perhaps too much catering to power and tourism, rules and certainty, for Smithsonian entropy and non-sites to undo.

It's the frequent fate of famous artists who die young that their inevitably limited body of work is met with our urge to complete unfinished works, to reconstruct destroyed or lost ones, to replace significant components left vulnerable or damaged, to treat paraphernalia as quasi-works, to elevate early works to the status of mature ones, and even to make new ones. Smithson has had his share of this treatment over the years. His Amarillo Ramp, unfinished when he died in a plane crash on July 20, 1973 while surveying its progress, was completed by Holt, sculptor Richard Serra, and future dealer Toni Shafrazi. The Whitney retrospective presented other cases. For the video Mono Lake, identified as a collaborative work by Smithson, Holt, and Michael Heizer, Holt cut together slides and super 8 footage and added sound. A canonical example of Smithson's meta-Minimalism, his Enantiomorphic Chambers, appeared in the form of a 2003 reconstruction of the now lost 1965 original, and the 1969 Chalk-Mirror Displacement was shown in "exhibition copy" with chalk "retrieved" thirty years after the original was executed. For Nonsite (Oberhausen, Germany) the original slag was too fragile to ship and was replaced. Numerous, sometimes goofy but mostly simply flat, early oil paintings and works on paper were on view and significantly dated from before "1965/66," when, in Smithson's words, "I really began to get into [an involvement with natural materials], and when I consider my emergence as a conscious artist." [A6]

On the occasion of the retrospective of Smithson's friend Eva Hesse three years ago, curators, conservators, former studio assistants, and peers plumbed questions of aging, deterioration, replacements, reconstructions, and intent. [A7] Little was talked about such issues in the context of the Smithson exhibition. Perhaps entropy and non-sites could all too easily be misconstrued as a lack of concern for making and materiality. To be sure, Smithson was clear. "What I'm interested in is making art… you don't need systems, you don't need art ideas… because ultimately it's the material, and that material is language, steel, whatever you want to have it." He wanted to "make clear the point that it's not preconceived. That things turn up as I go along." [A8] We're left wondering whether Smithson would have gone along with this show.