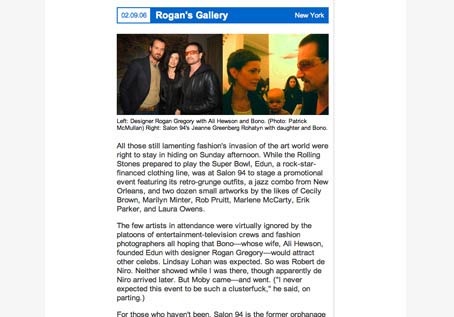 Vis-à-vis the inferno of billions of uncheckable facts and factoids that we are facing in blogs and other networked- forms of communication, formalist alterations of art system-related gossip up until recently had not exceeded a certain limit. Home-made fanzines and newsletters - think of "Coagula" and its likes - had to cater to the most basic, primary gossip needs on their own.

In the meantime, the art market has not only become mass entertainment, it is also becoming a market just like any other. Martin Conrads examines how this is affecting users and contributors of specialised art gossip blogs.

The point when even an ordinary evening news viewer could no longer consider the blogosphere to be an invention of Teilhard de Chardin probably coincided with the u.s. election campaign in fall of 2004, at the latest. It was not least the American president himself who brought the subject matter of weblogs and the doubts related to the significance of this contemporary phenomenon to the fore, lending it a greater impact: George W. Bush must have learnt that rumors were circulating on the Internet - and there, predominantly in blogs that for the first time accompanied and influenced an election campaign. The fact as such was not new, but Bush's claim to have heard of these rumors on several "Internets" certainly was: A film clip going round on the Web at the time depicted a scene from the second tv debate between Kerry and Bush during which the latter said: "I hear these rumors on the Internets." As if to confirm this statement, various interpretations of what Bush actually meant circulated at that point. According to another reading disseminated via blogs, the president, whose voice was hard to understand in that scene, actually said: "I hear there's rumors on the Internets" - through which Bush's assessment would have turned into a self-fulfilling prophecy, as it were.

If last year one refrained from visiting a number of bookmarked sites, forgot to update the operating system on time or simply relied much too long on the mailing lists of one's choice to forward more or less serious information and rumors about the Internet, one is now suddenly among crowds at openings where people in one corner of the room instantly agree even on individual discussion threads and links of specific blogs, while people in the other view this topic at least from a distance, if not indifferently. Even the occasional moblogger was said to have been sighted during these discussions, with the effect that the opening audience found itself next to some blog entry dealing with opening audiences or blog discussions in one of the next best flickr pools.

What happened? Did emancipation-drunk net citizens, who finally attained their publicistic rights, forge post-media alliances with the help of rss feeds, podcast subscriptions and flickr galleries against the bourgeois media's power to define? Did an ideology assert itself early enough to push through the marketing concept of "Web 2.0" propagated in view of the commencing stock market mobilization, an ideology that the Californian Wired magazine had launched back in 1997 with its "Push Media" issue ("Push media will penetrate environments that have, in the past, been media-free - work, school, church, the solitude of a country walk.")? Or does the cms filler "rumor" - that "daily portion of insanity" (as one of the German-language blogs most often cited in the print media describes itself) - instead constitute a cheap tool to optimize reader profiles ("Every journalist can use blogs to find out what really moves and interests people", Hubert Burda in Frankfurter Allgemeine Zeitung, Jan. 30, 2006)?

The fissure in regard to the way in which the social relevance of this trend is assessed no longer traverses parties alone but, since this year, the art sections of newspapers as well: While in the Süddeutsche Zeitung, Alex Rühle uses the catchphrases "Knights of the Blather Table" and "Swelling Blog's Chant" [1]. to brush aside the alleged promises of the blogging "Web 2.0" as "algebraic charlatanism" (Feb. 2, 2006), Stefan Niggemeier, on faz.net ("Medienrevolution. Das Publikum an der Macht", Jan. 29, 2006) - not without going on about Süddeutsche Zeitung's own blogs - finally sees the techno-emancipative revolution at work, which, in his view, came to an undeserved, early end just a few years ago when the dot.com bubble burst.

Displacement activities from the feuilletons to the think tanks of the culture-processing industry have been taking place for quite a while: Far from reflecting on the contents of the blogs, it won't take long till talk in the relevant art rags will be not just about the biennialisation of art but also of its bloggification. When the Californian gallerist Jack Hanley recently mentioned blogs as an artistic branding tool in direct connection with the boom of biennials, art fairs and low cost airlines [2]., the classification of art world-immanent blogs as the mere effect of a no-frills chic at least freed one of the feigned cultural-pessimistic fear of who should read all of this. And indeed, the pieces of information circulating in the art world blogs appear to be important only when they either grease the wheels or meet the demand for rumors, by no means a contradiction - "art criticism", at any rate, is until now a category that functions as a means to an end. Two "Predictions for 2006" published in January by the online platform artnet.com, which has always tended to feature celebrity gossip, are symptomatic [3].: The art dealer Barry Neuman bets "that there will be 50 to 60 new and bona fide (i. e., seriously authored by qualified people) art world blogs by the end of the year. Why is this significant? In some cases, the blogs may speed up the infotainment machine that's impacting the actual, hands-on, real-world art scene, locally and internationally." And the blogging artist Cory Arcangel remarks: "i am still waiting for art's answer to pink is the new blog, the new celebrity blog, or gawker or even slashdot.org. let me know when it exists, i'll prolly hit reload like 400,000 times a day."

As typical gossip blogs, Gawker or pink is the new blog - mostly on a paparazzi level ("The Gossip Blogads Network taps into Hollywood and New York celebrity and entertainment headlines, personalities, scandals and industry buzz") - are in fact models for a trend currently being seized on by art magazines as well: While as early as 1996 artnet.com demanded glamour from the affectedly smiling participants of each event ("Out With Mary", "Out In London", "Beautiful In Brooklyn", "Out At Berlin Art Forum", "Madonna Of The Moment" etc.), since recently magazines such as Artforum have been following suit with their own blogs, in Artforum's case a blog conceived as a "diary" ("Scene and Herd"). In the United States, the compulsion to produce blogs as a marketing measure has meanwhile also spread to galleries and institutions such as the Walker Art Center. Concerning the mentioned predictions for 2006, an author prognosticates in the blog of the Smithsonian American Art Museum: "By the end of the year, every visual arts museum in the nation will be operating or encouraging some form of podcast."

It may well be more than a rumor, then, that in the art world the promises of "Web 2.0" have in the meantime also become an economic factor for advertising customers - for instance, when the business magazine Forbes starts listing and evaluating "art blogs". It recommends the "Artforum Diary" with the following words: "Breathless, gossipy and illustrated with people pics torn right out of the social pages (and commentary on which curator is wearing the fetishistic black patent leather boots). This blog of the venerable art rag puts you right on the scene in art world hot spots, from London to Los Angeles, from Miami to Mexico City, and of course New York. Whether it's a performance of the ultra-hip art duo Los Super Elegantes, a fashion-show event at Jeffrey Deitch Gallery or the wild party scene during Art Basel Miami, the diary serves it up in vivid and dogged detail. […] Monumentality and gaudiness, baby." [4].

Particularly in the case of the Artforum blog reportages written in Miami, Forbes is not mistaken about the diary character through which the au-thors, who are predominantly fixated on imminent mini-events ("Lunch was next") and eminent large deals ("I ducked into a taxi and headed back to Miami Beach: $ 47."), are intent on producing unasked-for, self-certified in-crowd feelings, blogs which (fueled by a variety of interspersed quotations sounding as if they were randomly recorded on site) amount to nothing more than immediately dispersed listings of who sat with whom next to the pool at which party. This is not necessarily a form of self-assertive writing, though, which has elsewhere been described as "deriving general diagnoses of the times or forming unconventional analogies." Instead, these kinds of blogs can be counted as genuine publicist products of the consumer market: The journalistic need for nestling up against the subject matter being described is at any rate as remarkable as the flow of words, names, places, images, presumptions and assertions, which, already proclaimed as rumor, serves to optimize the techniques of the operative closure of the market in the sense of an "on-dit for all".