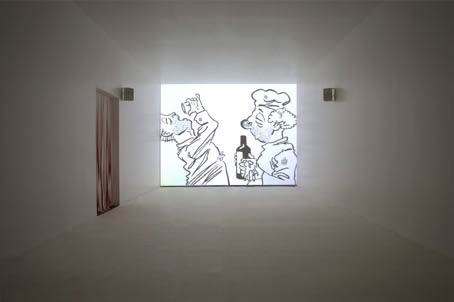 Vomit never completely shakes its reputation as a base and inferior form. The respectability it gains is exclusive to the talent that elevates it. This has to do with what a fine line the form introduces. So the tremendous amount of cartoon vomit in Mark Leckey's "Gorgeousness and Gorgeosity" at the Portikus might lead one to think this isn't one of the most elegant shows around lately, but it is. In „Drunken Bakers" (2005, DVD, 55 min.), Leckey has compiled all existing installments of the comic "Drunken Bakers" into a relentless exegesis on suicidal stoicism in which two mild mannered bakers navigate their day sadly numb to everything but the next drink. In stark contrast "Made in ‘Eaven", 2004 (16 mm, 3 min. loop) documents the day Jeff Koons's "Rabbit" spent in Leckey's one-room flat. The film is transferred from video after being digitally manipulated to take out the camera that's rotating while zooming around the bunny. Within it we see reflected Leckey's one-room London address, which has become the setting for several of his projects since 2001's "We Are (Untitled)". The bunny room is painted a deep red, and the door leading to the Drunken Bakers is painted with a subtle faux finish to give the illusion of having molding and a piece of bent metal screwed to the door, a rough echoing of details in Leckey's empty apartment. The deep red walls also happen to be Jack Goldstein's idea of the optimal viewing conditions for film. The projector is running so fast while you're watching it you are given the impression it would rip itself from the spools and burst from the ruckus of itself. The "Bakers" room is painted a sickly gloss white with white carpet and gloss white streamers leading towards the "Rabbit". Over the entrance is a projection of a clock taken from the comic that alerts the audience as to where the bakers are, but it is really irrelevant because nothing changes, there might be a dead body out in front of the bakery. The laws of contemporary consumption prevent any appreciation of how this might affect them, except when one baker trips over the body and his drink crashes to the pavement. As I was walking past the restaurant next door to the exhibition, I could hear Beethoven's 9th, and thought, oh my God, are they eating to that, but this metonym for dandyish hoodlums was coming from a smallish speaker out on the cobblestone and was the accompaniment to a brief trailer being shown in the window of the exhibition space. And while it seems unsurmountably difficult for art to squeeze any more mileage out of "A Clockwork Orange", Leckey does it casually. In fact, effort is a deceiving concept in the works on view here and his production in general, on the one hand what appears to be a simple installation unfolds into many minute details not usually associated with video installations. One of the most commendable aspects of experiencing any of Leckey's works is that while for the most part they are videos, they don't fall victim to being video art. Leckey is a documentarian of sorts, and video seems to function at times as the most pragmatic vehicle. So that what we have in the end between the two works is a bit like the relationship that develops between King Kong and Naomi Watts in Peter Jackson's new film. Where the capacity to appreciate the other's most important aspects – such as their understanding of life and death – is possible, but practical issues such as being of the same species make the relationship unfeasible. What is left is the space between their incompatibility, the oblivious and habitual drive to end your life in the face of the pressure cooker of humanity and the will to produce again and again in the choke of exhaustion that has become production.