This issue of Texte zur Kunst is dedicated to the historical and present-day connections between psychoanalysis, art and politics. Contrary to all conjuring of community or an almost “family-like” cohesion, it is a well-known fact that the field of art — like all other social structures — is also characterized by competition in the struggle for economic and symbolic capital. Anecdotes about battles to gain dominance and recognition in group contexts or antagonistic arguments between different artistic formations are legion, not only since the days of the historical avant-garde. It needn’t be specially emphasized that, beyond the overarching ideal of an objective exchange of arguments or debates dealing with criteria, psychological motivations — or even personal animosities — also occasionally play a big role, in some cases even becoming the driving force and subject of artworks. In this regard, one can speak of specific forms of “psycho-political” argumentations as they apply to the political discourses in the entire spectrum ranging from right to left in the form of one-dimensional attribution of feelings, such as envy, greed, hate, or also love and solidarity, to individual social groups.

The contributions compiled in this issue on the current and continuing relevance of psychoanalysis are based on two propositions. First: The theory and practice of the “talking cure” once founded by Sigmund Freud still provide the metho-dological instruments needed to describe these relations in their dynamism within social fields. Second: The theoretical model that must serve as a starting point here is based, in a departure from the triadic and drive-theoretical structures -(Oedipus) of classical psychoanalysis, on Kleinian, object-relational theoretical approaches which are a precondition for examining the relationship between individual psychological dispositions and social contexts along with their conflicts and regulatory mechanisms.

The works of Wolfgang Trauth on “psycholo-gical organizational principles” form a productive theoretical model which is put up for discussion and whose critical potential is discussed in this issue. The Munich-based psychoanalyst is of the opinion that affects are always organized in a “bipolar” way: While the ego senses one part as belonging to itself, the other — as Trauth terms it — “counterpolar” part is repressed and projected on or delegated to others. This consistent, relation-theoretical approach also addresses the large variety of psychosocial forms of staging revolving around the production and reception of affects, so that contradictory emotional states, such as autonomy and dependency, strength and weakness, control and submission, as well as privation and abundance, can be reconstructed in a general theoretical frame making use of concrete case studies (see the interview with Wolfgang Trauth conducted by Helmut Draxler). Moreover, this approach appears particularly adequate for being applied to the special interrelations between psychology, politics and aesthetics. Rather than essentializing affects — a method that is of decisive significance in biopolitical power calculi, as Marie-Luise Angerer has elaborated in her recently published study “Vom Begehren nach dem Affekt” (“On Desire for the Affect”) — the topic must be to consider them in their relations, thus establishing the conditions for creating a “space for politics” (Ètienne Balibar), on the one hand, and understanding the history of aesthetics as an arena for mobilizing and repressing psychological categories, on the other. Seen from a historical perspective, aesthetics, as a theory of the perception and judgement of art, is itself characterized by moments of psychology. The sentimental pleasure taken in art and the reflective experience of art are not mutually exclusive, however, but starting points of aesthetical experiences that can be related to each other in a variety of ways (see Helmut Draxler’s contribution). From the point of view of feminist art history, it is precisely the alleged separation of politics and subjectivity that is challenged by the artistic practices of female artists, which can be adequately grasped only against the background of a psychoanalytical theoretical formation (see the contribution by Mignon Nixon).

As has occurred in psychoanalytically inspired film theory and the resulting studies on the cine-matographic addressing of spectators following the 1970’ theory of apparatuses (see the contribution by Hermann Kappelhoff), the institutional and discursive structures of the aesthetic field, too, can be questioned as to their psychosocial dynamics. Against this background, Andrea Fraser, in her fundamental essay published in this magazine, seeks to examine the theory and practice of reflective (cultural) sociology developed by Pierre Bourdieu in regard to their psychoanalytical implications, thus making a significant contribution to theoretically underpinning an expanded understanding of institutional critique that not only examines the economical parameters of museums and the market, but also discusses the psychological effects and affects of the acting agents fighting for legitimacy and capital in the field of art and its institutions. In this sense, the “psycho-tactics” of artists are to be explored, as they have evolved particularly since the 1970s within the differentiated worlds of art as strategies of dominance and achievement, on the one hand, but also as tactics of self-assertion and practices of infiltrating and breaking the social sphere (see the contributions of Michael Dreyer and Gregg Bordowitz).

Since March 2006, Texte zur Kunst has been making all contributions in the main section available in English for our non-German-speaking readers. As has been the case in the previous issue, all reviews written in English are published not only in German translation but also in the “English Section”. 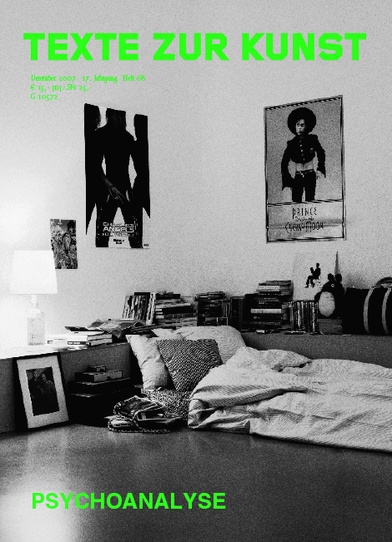