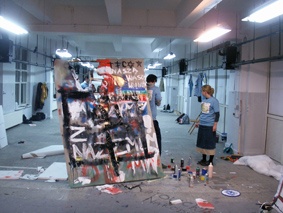 What could the curators Claire Bishop and Mark Sladen make of their premise as stated in the accompanying brochure, “an exhibition of art works and collaborative projects in which the artist uses other people as a medium”? Updating the re-skilling of the artist as manager of other people’s work in Conceptualism, “Double Agent” conceives of the artist as a kind of animateur, one who orchestrates and operates in social situations as a means of displacing and extending the artist’s role, seeing “individuals or communities” as “surrogates” for artistic agency.

Bishop is by now well-known for taking issue with the eclipse of conflict and antagonism in Nicolas Bourriaud’s formulation of “relational aesthetics” and in works falling under that rubric, such as that of Rirkrit Tiravanija, Liam Gillick et.al., with this critique recently extended to “social” practitioners like Temporary Services. In the latter text, published early last year in Artforum, she countered this trend by pointing to the polarising tactics of e.g. Santiago Sierra. It comes as a surprise, then, to encounter the genial but unfocused tone of “Double Agent”, where the loosest of premises (artists who work with people) enacts an unavoidably loose, if not limp, articulation of work which could have been combined under a number of other premises, not to say have been substituted by any number of other works by completely different artists. While conflict and antagonism can be said to dwell blatantly or implicitly in some of the processes and objects staged here, the way the work is presented bears no marks of struggle with its institutional container or art world determination — staged, but no stakes.

Phil Collins’ “You’ll Never Work in This Town Again” (2006) is mounted in the long corridor between the ICA shop and bar. This happy slapping gallery of large-format close-up photographs of art world figures who have agreed to be slapped hard, then captured on film by Collins includes the agreeable and lightly inflamed features of the curators (also available as a limited edition with the catalogue). Such a trivial ritual of confrontation that unmasks prestige only to send it back more gilded than ever can start to shed a bit more light on what is meant by “artists who use people as a medium”. It’s a consensual process which leaves roles, identities and income streams intact. In the art world “a slap in the face of public taste” is always welcome. However, as a reflection on the drawn-out undeath of institutional critique, the piece is rather effective.

In the first room, a loquacious invigilator buttonholes the visitor and conveys information about the Christoph Schlingensief installation “The African Twin Towers — Stairlift to Heaven” (2007), much of which can also be found in the exhibition leaflet. As representative of a profession that normally avoids even blinking eye contact, the suspicion grows throughout the show that invigilators have in fact been briefed to trade in their usually taciturn miens for a more extroverted approach to the gallery visitor — a perfect symbiosis of premise and service. It might be noteworthy that Bishop has remarked, in her own critical writings, precisely on the tendency of the “relational” project to adopt modes of performance and interaction honed in the sweatshops of the “experience economy”. The experience is en route to completion once the viewer has been strapped into the stairlift and ascended to the upper left corner of Schlingensief’s wall projection. Once high and immobile, you are bid to lift a small black cloth on a wooden box to disclose a film looped inside, showing two of the artist’s regular collaborators in an affectionate scene. But the gallery situation lacks the dimension of collectivity, time and excess of Schlingensief’s project, leaving the viewer more, not less, passive after their mini-ordeal, unable to distinguish between the demands of the work and the demands of the invigilator and determined to avoid both.

The Pawel Althamer/Grupa Nowolipie room upstairs, according, again, to the exhibition leaflet, rounds off the question of “ethics and exploitation” that lingers over this show. In a cluster of short videos and figurines, Althamer’s decade-long involvement as an instructor in a ceramics class for disabled adults is narrated in a droll and low-key fashion. Could the production of awkward crafts or feel-good outings for shut-ins be considered here an analog for the artist who works with people as a medium? Whatever his level of identification with his charges, it is clear that the power relations remain aporetic, if somewhat cutely cloaked by the presence of a layer-cake pedestal displaying ceramics produced by the Nowolipie group. The status of the little ceramic figurines as the material residue of a therapeutic process also, strangely, provides a nice synthesis of “Double Agent’s” concerns, which could be seen to largely revolve around the shape-shifting agency of the artist as a mediator of collective production who then appropriates the results. As it is no longer about the artwork, but about the rules of engagement between artists and their collaborative others, this is a highly equivocal formation. If the means of production in art, as elsewhere, keeping to the current arguments of political economy, are seen as immediately social (language, affect, embodied interaction), then the capital produced thereby becomes a political matter. It then seems a bit specious to frame the choice of “artists” to work with “people” as a choice of “medium”; especially in the UK, where “participatory” art is a sine qua non of government and economic policy rhetoric.

With the elision of this line of questioning at the curatorial level, perhaps another optic the show would be amenable to is the time-worn one of the “gift”. In her catalogue essay for the “Work Ethic” exhibition (curated by Helen Molesworth at Wexner Center in 2005), Miwon Kwon wrote on the character of the “gift” in art, noting the relations of hierarchy and unequal exchange that the “gift economy” always presupposed, as explicated by Marcel Mauss and others. This is the specter dawdling around every instance of “generosity” as a hallmark, and cohesion as an outcome, of art that engages the viewer as participant, in a lineage traced from Fluxus to the recent consolidation of “socially engaged” modes. By participating, the viewer enters into the artist’s “game” and confirms her authority; by distorting or refusing the invitation, the fundamentally unequal status of the relation can be disclosed, and perhaps revised. If the only way to disrupt this power game is to refuse the gift, here being the gift of artistic collaboration, this is what the protagonists of Artur Zmijewski’s instant car-crash classic “Them” (2007) are busy doing in the room next to Althamer’s. This piece probably comes closest to the notion of antagonism-through-art espoused by Bishop, as its whole exegesis (four groups of individuals with radically incompatible political beliefs respond to the set-up of producing a collective artwork by systematically destroying each other’s efforts) is a spectacular rebuttal to the notion that art brings people together. But aside from its pedagogical neatness, it’s also a cue to the “double agency” of the artist, an agency which is claimed in the control of the experiment, but renounced in its consequences. Of course, the chaos that Zmijewski’s gesture instigates could also be viewed more benignly; the artist as catalyst for a renewed public sphere, where people feel empowered to express themselves, even if it’s via petrol rather than petitions.