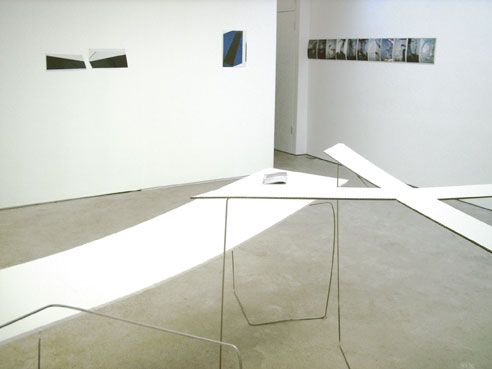 In the exhibitions of Berlin-based artist Henning Bohl, images and objects are never presented as isolated individual works, but are rather always brought into an installation context which both choreographs the movement of the observer in space and makes the works, often assembled from industrially-produced materials, appear as props for a coming performance.

The title of Bohl’s first solo exhibition at the Galerie Johann König thus promised a questioning of theatre today. Reduced to a decorative palette, image objects, produced from the overlay, folding and collage of rolled-out paper webs and uniting equally multi-layered references to the history of visual and performance art, transformed the space of the gallery into a theatrical parcours. Which perspectives and insights, however, resulted from this peek behind the scenes?

There are six or seven canvases mounted on cornicing at Johann König. Some of the cornice belong to the gallery architecture, another part has just been installed, it divides the space in two. The canvases stop just short of eye-level. Brightly coloured, animate shapes are stuck down to the white material, they crease as they overlap and pockets of air blister the surface. Some of the edges have been left to curl like tired posters. Their titles are fragments of the words theater heute/psychology today, the letters appear in black text next to each canvas like the installments of a broken text message.

Henning Bohl’s paper cut-outs adapt the technique adopted by Henri Matisse during the 1940s. His health deteriorating, Matisse began to compose pictures and layout designs for textiles, stained glass, ceramics and colour lithography with cut paper covered with gouache paint. He would talk of the sculptural nature of the work, cutting through pigment, describing the process as “drawing with scissors”.[1]_ The graphic effect of the flat colour and hard lines made the cut- outs adaptable to reproduction in print. Matisse used Linel gouaches in a range of colours that corresponded directly to the inks used by commercial printers and the cut-outs frequently found translation in pochoir prints, the most famous example being his 1947 book, jazz.

Bohl’s paper is screen-printed, the uncoated, white underside furling- in occasionally to make an ornamental relief. Calligraphic scythes of colour moving through the compositions and paper curling on the surface of the canvas lodge an idea of painted scrolls and ancient, Oriental, graphic arts. Other motifs have a more domestic appeal; a line is folded back and forth like streamers or ribbon, dots and tear shapes are scattered like Fuzzy Felt or confetti. Bohl’s schemes tap a flood of associations in a cartoon palette, from prehistoric cave painting, tapestries and Japanese Emakimono scrolls to festive decoration and abstract figuration.

An interview with Bohl some years ago referred to a photograph of Matisse.[2]_ The artist sits in his wheelchair completely absorbed in his work, he is positioned in the middle of the studio and there is a carpet of cut paper scattered like autumn leaves at his feet. He is physically and mentally enveloped in the work. Bohl was fascinated by this picture of the artist fashioning his own legacy, a case of history within history. The images of one history hold Matisse’s objects in tact, they must be colour-matched and faithful to the original object. The other series of images show the work in a state of flux, they stage a “behind the scenes” narrative and it is the artist not the object that assumes the central role. It is this notion of a meta-history, of parallel and conflicting narratives for the object that comes to mind in the dual aspect of this exhibition, “The ate rT oday” (sic). Moving amongst Bohl’s canvases the text and individual graphic elements leak out piece-by-piece. His objects are often crafted with the scale and basic structure of stage scenery and looking up at these panels becomes like taking in parts of a set from the stalls. There’s a fictional distance implicit in their position, they address the space as if it were an auditorium. Bohl engenders the kind of looking that goes on in churches or world heritage sites; wandering round, head back, trying to follow the scheme of imagery whilst running the risk of accidental collision. This device of physical separation from the work alters the view and frames the encounter in a manner analogous to the proscenium arch in a theatre. The art literally appears to exist in another space.

That this performative encounter with the work should occur so naturally attests to references that have moved from the periphery of Bohl’s work to its core logic. “The ate rT oday” does not merely refer to the active modes of making art and constructing meaning, it self-consciously stages these ideas in its choreography. The tears, dots and bow-shaped characters slashing into these compositions are familiar from previous exhibitions. Partly decorative, partly a cipher in a symbolic scheme, they are elements in a stock repertoire that has evolved with reference to the stylized traditions of Japanese Kabuki theatre. Stuck down, overlapping, layer upon layer, they are worn like emblems in Bohl’s work. Like the masks painted on the actors to denote character or the use of pattern and repeat motifs in stage design to describe the texture of woodgrain, waves or cherry blossom they reside on the surface of the work. Their repetition and countless combinations have the same playful pop appeal as the paper scattered at Matisse’s feet. Bohl’s assemblage of emblems recommends itself as a decorative scheme to be applied and adapted to cover any surface. In this way it emulates the versatile nature of Matisse’s cut-outs and their various manifestations in reproduction.

This emblematic status extends to Bohl’s treatment of the work itself. The panels are hung decoratively from the architecture of the exhibition like bunting, avoiding the walls and the floor as if they would refute any association with painting or sculpture. Previous shows by Bohl have proposed an idea of enclosure with an assemblage of flat or paneled structures that form bounda-ries or interruptions. Grids, nets and trellis have referenced a discreet, almost decorative form of instruction through design, the kind of control exercised by flimsy fencing made with a purpose more symbolic than effective. Here Bohl creates a sense of space and physical liberty, encouraging us to weave our own path within his dramaturgy whilst directing a reverent pose toward the work and marking out a path in the textual formula for the exhibition. Everything becomes locked in the sequence of language itself, the canvases drop down like huge illuminated letters. They are tied to the words, inserted in the lettering and titled after it, willing them to an act of illustration. Bohl creates a scenario, entreating a spectacle of reading and an act of engagement that has the look of revelation. The canvases are poised to impart narrative, but ultimately, an interior logic rules. The panels make blank incursions on the words, overriding their integrity with their own system of associations and ideas.

The titles of the individual works, the text along the gallery cornice and the title of the exhibition itself, refer to two magazines, Theater Heute and Psychologie Heute. Their names advertise a niche specialism and a shared approach to the technical deconstruction of their respective fields. Bohl is doubtless drawing parallels with his own self-reflexive practice. Specialist concerns with the history of art and art production are the primary subject matter for Bohl’s own work, but his pairing and wordplay with these magazines fashions a binary from their subjects, theatre and psychology. Whereas one is fundamentally about the production of a fiction, the other is to do with breaking it down. Covers from Psychologie Heute hang on the wall, bracketing the exhibition, and Bohl quotes directly from the imagery (a series of staged portraits by his friend, Sabine Reitmaier). The themes of Theater Today, the staged image or encounter, the notion of approaching visual media with a narrative, the action of writing or reading narrative and the dual role of the object within these events are anchored in these portraits. The narrative content of the models’ gaze, expression and pose is framed within Bohl’s scheme and the magazines become actors translating ideas from text to physical drama. What occurs is something equivalent to the photograph of Matisse. Like Matisse, the magazines appear within a prevailing assemblage of graphic characters, familiar from the artist’s (in this case, Bohl) other work. The magazines appear as direct quotes. Bohl is self- consciously revealing the primary source material for the exhibition, staging a “behind the scenes” account of his creative process. The models pose is fixed in concentration, they look into the lens of the camera or hold a finger to the lips or cradle their face with their hands as if intent on some silent, telepathic communication. Within Bohl’s scheme these magazines dramatize both the construction of narrative and its unravelling, the staging of an image and the act of making sense of its content. They are symbols of both theatre and psychology. Bohl fashions a play-within-a-play referring to the life of an image in construction and deconstruction.