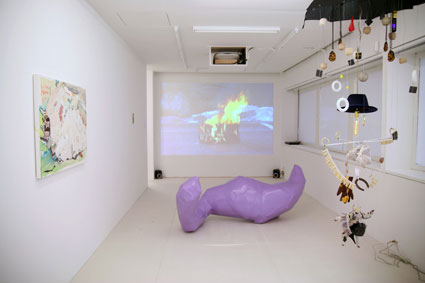 The artistic production of Nikolas Gambaroff can be described as meta- painting. His abstract images are created based on conceptual and aleatory processes and, upon closer inspection, reveal themselves to be simulations of traditional traces of the painterly.

In the Paris gallery Balice Hertling, Gambraroff’s images were used as props in a performance by Ei Arakawa, which placed them in different contexts and allowed them to be used by visitors at the opening. What happens, though, when paintings become objects of use? And what effect does this have on their commercial value?

Kleist burns out too quickly; it does not provide enough heat for the cold. That’s another way to look at it. Right now, it’s probably the correct way.

—From Rainer Werner Fassbinder’s “The Marriage of Maria Braun”

Although the press release as artwork has become a fairly common device in recent art practice – à la Seth Price – it would be wise to look closely at the two-page dispatch, designed by Nikolas Gambaroff for his first solo-show at Balice/Hertling, and to consider it not as an artwork, but as a preamble or guide to his exhibition: “8864 3362 2250 Z1 CTGRT” – the FedEx shipping number for the artworks transit from New York to Paris. The most striking feature of the document is an appropriated advertisement from the Lowe’s hardware franchise’s website in the form of a concrete poem fashioned to resemble a house painting brush and employing a handwritten font. When reading this ad from top to bottom, we learn that the bristles of the brush paint the tale of a “bored out of her mind house-wife” who “needed” to remodel her out-dated “70s” styled home into something “exciting”. As an antidote to this situation, the ferrule of the brush acts as a kind of literary binding device and tells how this fictional every-woman logged on to the supplier’s website and bought various tools for painting, “blue and yellow paint”, “painters tape” and the like – cataloged to form the handle of the brush. This tripartite narrative may be well organized, and its formal synthesis into a “sign” of painting is very cleaver; however, the content which expresses a quasi-misogynic tale of how a corporate warehouse could pleasure unsatisfied domestic woman countrywide by selling the necessary tools to transform their lives through decorative painting and hobby craft, presents a worrisome politic. Possibly, as a form of satire, Gambaroff, the bored painter, mirrors this manifold relation between form and advertizing in his show by leading an apparent deconstruction of the tried-and-true procedures of conceptual art. To this end, the exhibition is smattered with works that utilize aleatoric and stochastic generative methods that then are superimposed with concerns form the Support/Surface group, such as the template and imprinting techniques Claude Viallat utilized as a self-reflexive questioning of the material support of the canvas, as well as appropriation. From the release we also learn about the “Monte Carlo Methods”, a class of computational algorisms that rely on repeated random samplings created by “The Rand Corporation”, a nonprofit global policy think tank first formed to offer research and analysis to the United States armed forces, to simulate physical and mathematical systems. Eschewing Viallat’s use of the grid as an organizing principle, Gambaroff borrowed some of these Monte Carlo numbers to set-up his own coordinate system with which to prescribe the layouts of the abstract paintings presented. Although this exact method remains hermetic to the viewer – and is probably more of a heuristic for the artist – the show presents a robust series of twenty-three abstract paintings, which randomly sample various styles from color field poly- and mono-chromes, to few gestural yet geometrically ordered abstractions and a series of mono- prints wherein canvas stretcher bars have been “inked” and then pressed onto the canvas leaving a trace of this process through the clearly defined counters of the wood and its grain. One of the keywords that Gambaroff buried in his press release is “encryption”, and looking at these mono-prints offers a clue as to what might be hidden as an underlying text.

All of Gambaroff’s “paintings” are in fact mono-prints posing as paintings. On closer inspection, it is possible to discern that all of the marks on the canvases where created by painting on various substrates such as the protective plastic wrapping on store bought canvases, stretcher bars and other canvases, but always limited to the materials traditionally bought when buying painting art supplies. From here, these ur-paintings where then transferred onto a secondary un- stretched canvas resulting in a print that would then be stretched on bars and thus finished and presented as a “painting”. The product of this process is not reproducible as successive transfers would not result in a 1:1 reproduction of the ur-painting due to the loss and distortion of pigment inherent in the process. Gambaroff’s breaking of the mould, so to speak, not only provides an intentionally trite critique of the commoditization of the art object by feigning the mechanical means of printing to produce a unique art object instead of a mass produced product, not to mention a critique of the gallery system of creating multiples to diversify the artist’s sellable portfolio, this mechanical process is also referencing the displacing of the “hand” of the painter, another concern of Viallat, amongst others. Here we have another historical trope, which Gambaroff is leveraging into the universe of this dense stew – but why?

Also from the press release we learn that Gambaroff had invited the performance artist Ei Arakawa to collaborate with him so as to make an event out of the opening entitled “TCCA Magazine 1”. Arakawa’s inclusion makes perfect sense stemming from his own series “Grand Openings” that often makes use of off-the-shelf store-bought building materials such as drywall, aluminum and wood studs and the like, to build real-time “helter skelter”-like environments which disrupt the audience and exhibition space during an opening. Suitable to Gabaroff’s manual-like investigation, “TCCA Magazine 1”, also featured a catalog of nine procedures or activities with which to engage both the artwork of the exhibition and the site of the gallery itself.

At the opening events themselves, these procedures began with Arakawa and Gabamroff building a mirrored 1:1 in scale facsimile of the mullions of the gallery windows with 1’’?x?2’’ wood slats; however, the resultant wood structure wasn’t an exact match either. Sympathetically, this construction seemed to be interested in similar concerns with Gambaroff’s “paintings”: here the material support of the canvas, namely stretcher bars, was metonymically hinged toward a fascination with the vertical support of the gallery windows, the “picture plane” of the galleries storefront – designed to advertise what’s inside. This wood structure was then used quite literally as a vertical support when several of the exhibition’s “paintings” where taken off of the walls and hung off of this frame outside and in front of the gallery. This displacement of the site of reception, moving from the gallery to the street, once again references some of the Support/Surface exhibitions such as the “Été 70” series that placed artworks along the French coast from the Italian to Spanish borders. Along these lines, a segment of this wood structure was brought into a neighboring bar, which again hung a painting. Arakawa then posted a series of wedding announcements clipped from the New York Times and invited various by-standers to read these announcements into an microphone plugged into a working amp, chronicling the lives of investment bankers to bar patrons. However tangential these readings might seem, their allusions begin to solidify more and more with each subsequent performance.

The most literal surfacing of an economic leitmotif became clear when Arakawa asked the audiences members to draw lines nearly three-meters long with a pen across two pieces of foam core incorporated into the wood scaffold built by Arakawa and Gambaroff. Some of the people drawing tried to make as straight a line as possible, but the lack of hand control by some resulted in a series of lines that quivered up and down erratically like either an EEG or the ever present line graph of the fluctuating Dow Jones Index now featured daily on every newspaper during this current financial crisis – talked about by the galleries patrons. A more subtle, if not a sotto voce, narrative emerged in later performances, which dealt more specifically Gambaroff’s “paintings” themselves and their position in the gallery.

Like the bar and the street performances, Arakawa literally took the “paintings” off of the wall and used them in a prop-like fashion so as to furnish pieces for the subsequent performances. All of these actions disregarded any of the “paintings” as rare objects – none were harmed – and also had little concern for what was depicted on the canvas or how they were produced. Instead, they were passed around quickly like a game of hot potato between various audience participants. In another, the “paintings” were appropriated as siding to make a ramshackle hut with the wood scaffold, at another point they were stacked and used as a weight to crush another visitor, then they were used as an opaque surface for people to hide behind so that the gallery looked as if it was empty at the opening, and again as sounding boards to be rubbed together, face to face. Most delightful of all, one of the “paintings” was attached with Velcro to the automatic steel security shutter of the gallery and was hoisted up and then lowered down by it. Festivity and merriment aside, the collapsing of these artworks into simple and literal objects within the context of where they are sold and before various collectors, posed the strongest statement of the exhibition.

If it were not for Gambaroff’s willingness to displace all of the rhetoric around his process, the show would have smacked of an artist who was overly fascinated by his forebears and had yet to find his voice. However, taking the exhibition as a whole, that is “paintings” + performance, a savvy visitor might realize that this was all a giant set-up. “8864 3362 2250 Z1 CTGRT” could easily be read in the context of the historical canon researched, commented upon, and presented thoroughly by Gambaroff’s “paintings” as a self-reflexive show about painting-as-painting; however, turning the “paintings” into props and not actual artworks to be studied seriously puts into question what the actually social value of these art histories might be – if they are even legible at all. Furthermore, many collectors might have been in on the joke, but in any case, many of the works did sell as they were meant to. And it is this secondary “performance”, the purchasing of paintings, in which the artist has publicly disregarded any of the proposed goals and rarities of the painted image through his actions, that leads to the question: what is it that the collector really cares about – ordering well formed objects to remodel their home’s into something “exciting”? Depending on the perspective, paintings can be simply things to be bought and traded like anything else as “works are shipped like coal from the Ruhr or logs from the black forest” to reiterate Heidegger’s base description of the thingliness of the art object. By readdressing this blunt fact, Gambaroff and Arakawa have not presented formalism as an ideology, but fundamentally looked at the relation between form and the ultimate uses of the painted object in the world at large.