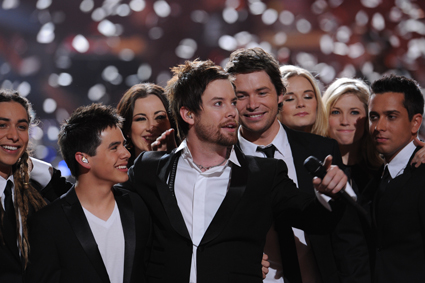 It is a long-standing practice in economics to develop profiles and use them to generate products and create advertising campaigns using the data collected and the consumer types derived from them. With the boom of “reality shows” and the popularity of digital forums such as Facebook or MySpace, the format of the profile has now left the realm of clandestinely-acting capital and definitively gained entry into forms of entertainment and communication.

But what actually makes a profile like those in Facebook, i.e. the medial staging of one’s own identity, so attractive? Why do thousands of people subject themselves to the selection and molding processes of casting shows like “American Idol”? And why do millions of viewers watch with such great fascination?

We are all profiles – patterns of data extracted from countless unconscious acts of consumption. This is not the unconscious of Freud or Lacan, but that of Claritas PRIZM, a product of Nielsen, [1] the company made famous for measuring television audiences. Claritas PRIZM has identified “66 demographically and behaviorally distinct types or segments” among American households. These include: “Young Digerati”, “Kids and Cul-de-Sacs” and “Heartlanders”. According to the company’s promotional literature, “Young Digerati”, for instance, are “the nation’s tech-savvy singles and couples living in fashionable neighborhoods on the urban fringe. Affluent, highly educated and ethnically mixed, Young Digerati communities are typically filled with trendy apartments and condos, fitness clubs, clothing boutiques, casual restaurants and all types of bars – from juice to coffee to microbrew”.[2]_ Like PRIZM’s other profiles, this one sounds like the mise-en-scène of a television sitcom. But the characteristics described are gleaned “objectively” from countless innocuous bits of data as individually inconsequential as whether cough medicine was tossed into a shopping cart along with orange juice during the winter flu season.

When analyzed properly such discrete quanta of information emerge as profiles. Wal-Mart, one of the largest retailers in the world, pioneered data harvesting. The New York Times reported that in 2004 the company possessed 460 terabytes of data, which was then more than twice that held on the Internet. For Wal-Mart, this vast accumulation of information functions as a form of capital – data-capital – that possesses a twofold value. First, it can help determine what goods to stock and where to open new stores, and second, it can aid in developing customized advertising tailored to particular types of consumers. In 2004, Linda M. Dillman, Chief Information Officer of Wal- Mart, claimed a quasi-clairvoyant capacity for her company’s data- capital.

At Wal-Mart, problems are referred to as “exceptions”, and technology is essential for what Ms. Dillman calls “exception management”. Within the company’s empire, “We keep watching everything that just happened”, she said. “We are pretty near real time. We can tell people that they need to go do something, and we are within hours, depending on the event.” [3]

Dillman’s account sounds a lot like live television on a short delay – Wal-Mart’s data analysis enables a virtual “liveness” or instantaneity within informational feedback that might even be called “data-vision”. Indeed, ratings companies like Nielsen arose precisely because commercial television in the United States required a complementary data-vision to determine who was watching and thus how much to charge advertisers. [4]

It is certainly tempting to think of Wal-Mart as a retail version of Big Brother that purports to know exactly what consumers require even before they do, but as Michel Foucault would have predicted, the urge to make profiles isn’t exclusively an exigency imposed from outside – it is deeply rooted in our desire – sometimes even our compulsion – to narrate ourselves. On Facebook and in MySpace, on dating services like eHarmony.com or Match.com, profiles are enthusiastically composed in order to represent oneself on-line to friends, acquaintances and strangers. Different sites elicit different profiles – one devoted to facilitating anonymous sexual encounters, for example, will require a particular type of information that might be discouraged or even prohibited on another site. Sociality in a digital environment now depends on the composition and publication of profiles – emergent configurations of data either gathered from or published in the non-space of the information commons. This form of digital “community” arises at the intersection of two broader social conditions: the increasingly efficient enclosure of everyday life in structures of surveillance and commodification (i.e., biopolitics) and the acceleration of celebrity culture. It is no exaggeration to declare that both commercial and political power now derive from the extent to which the images of products, performers, or politicians circulate. No wonder ordinary people wish to extend their own reach through the proliferation of profiles.

It is worth pausing to consider what kind of image a profile is. Profiles have asserted authority graphically through much of human history, from the portraits of monarchs on ancient coins to the anthropometric police files pioneered by Alphonse Bertillon in the late 19th century. But recently, profiles have gained a new relevance as blank forms. Kara Walker, for instance, piquantly translates the humble tradition of 19th century scissored paper profiles into a virulent array of stereotypes. Walker’s powerful aesthetic is echoed in a recent mini-boom of animated films like „Persepolis“ (2007) and „Waltz with Bashir“ (2008) that take up similar visual strategies to explore traumatic subjects of war and dislocation. And artists ranging from Seth Price to Allan McCollum (not to mention the early Ellsworth Kelly) have explored an abstract modality of the profile. Profiles are nearly blank images, which carry little or no information within their boundaries. In their most schematic manifestations, as in Kara Walker’s art, they function as outer- directed disruptions in a white expanse of wall. In short, the task of the contemporary profile is not so much to represent mimetically as to divide (a distinction that must nonetheless acknowledge that, pace semiotics, representing and dividing are closely related). A profile’s useful information is the line it establishes between an interior and an exterior.

Suffused as they are with inflammatory racial, gender and regional stereotypes, Kara Walker’s highly charged installations beg a question equally relevant to executives of Claritas PRIZM and Wal- Mart: what is the subjectivity of the profile? Profiles are patterns discerned from distributions of data – they emerge from statistically significant regularities in a vast databank of ostensibly random acts of consumption. Profiles, in other words, are artifacts of the search- based economy pioneered by Google and labeled “the long tail” by Chris Anderson in his influential 2006 book by that name. [5] Now that the Internet makes virtually any product available to us (because everything can be cheaply stored in warehouses and easily marketed on- line) the fundamental challenge to retailers lies in search – in linking the right buyer with the right product through the right algorithm. As Wal-Mart realized early on, what retailers need to produce is customers – and customers are made from data. If profiles have a body, then, it’s a body not unlike those mannequins Thomas Hirschhorn plasters with slogans: human effigies molded by signs, but empty inside where subjectivity is reputed to reside. And like all stereotypes, profiles can be violent in their extraction of subjects from a field of individually insignificant facts. “Profiling”, after all, denotes a practice among local police and federal customs agents in the United States by which people who possess certain ethnic or socioeconomic characteristics in combination are deemed more likely to be criminals or terrorists. They are the products of a violence fundamental to modern art: the violence of abstraction.

Profiles, then, are made – not simply “discovered” – from streams of data that consumers offer up freely, if often unconsciously, to the business enterprises they patronize. [6] Quotidian acts like using a credit card, or providing a zip code to a cashier at her request constitute the raw accumulation of data necessary for profiling. Such data harvesting – or what I am calling “data- vision” – begs all kinds of ethical and even legal questions. Is “our” data a form of property (after all, companies like Wal-Mart freely make use of it as a valuable asset)? And if so, should profiles be protected under the right to privacy as other kinds of personal information are such as medical records? These may seem like minor questions until one begins to comprehend the magnitude of information that is generated in a digital environment where tens and even hundreds of daily acts of charging, clicking and swiping, can offer a very accurate picture of a person’s actions and preferences. We should at least wonder if our life choices (and even our liberties) may become limited through the analysis and manipulation of data by huge corporations and governments. Under current conditions such threats are neutralized in two ways: first, data collection is largely hidden from public view, and second, we have learned to love our submission to profiling as a form of entertainment. In this regard, on- line social networks like Facebook or MySpace invite individual users to function as the agents and authors of their own profiles. But beyond this “private” activity, there is what might be called the profile’s “primal scene” – namely, Reality Television.

I have argued elsewhere that television has always been reality television – that real-life celebrity couples of the 1950s like Lucille Ball and Desi Arnaz or George Burns and Gracie Allen lent a gloss of documentary verisimilitude to the situation comedies they acted in, and that by the 1970s American television fictions began to reflect the changing demographics of a multi-cultural nation, particularly in Norman Lear’s highly successful situation comedies based on explicit class or ethnic conflicts like “All in the Family” or the “The Jeffersons”.[7]_ What characterizes the latest boom in reality television is its fixation on sustained and relentless procedures of competition that perfectly corresponds to the service- oriented labor markets in the West, where the threat of downsizing forces employees to develop new skills and higher levels of efficiency in order to survive. The wildly successful “American Idol,” now in its eighth year, dramatizes such competition in order to produce an “Idol” – or ideal profile. The crux of this drama, and the source of its suspense, is homologous with market research: viewers offer their feedback by voting on performers, so that by the end of the season, it is not necessarily the most talented singer who wins, but the one who tests best with an audience. “American Idol” – like its many clones and cognates centered on romantic, physical, class, or skill-based competition – thus takes the procedures of focus groups and ratings that typically remain behind the scenes and packages them as narrative content. In social networks like Facebook, profiles are offered as a gift and a lure, but in Reality TV the violence of the profile is enacted (and simultaneously disavowed) just as in sports the physical conflict underlying war is made palatable through its regulation and domestication. To the profile goes the spoils. But don’t be overly concerned – for the rest of us there’s Facebook, MySpace, YouTube?…