If one grasps “history” as the staging of collective memory, e.g. the 20th anniversary of the fall of the Berlin Wall, the 60th anniversary of the German Constitution, the 2000th anniversary of the Varus battle etc., it would not necessarily be a topic typically addressed by Texte zur Kunst. So, why “history”? In short, a change of scene has occurred in regard to the way artists relate to history and to what is to be understood as history in the first place. One can state the following: Neither does contemporary art currently focus on a history of events – something managed by the news media – nor is remembrance, which after the Holocaust became one of the most urgent issues of an art current dealing with history, momentarily of particular interest. Instead, the question related the ways in which different generations come to terms with the past is at the fore. Even if nothing appears as unchangeable as the past, that which is respectively subsumed as the past under the name of history is subject to a process of negotiation. The same applies to the question of the past which one acknowledges as one’s own – both in personal and collective respect.

Until recently, art dedicated to history was associated with names such as Anselm Kiefer, Jochen Gerz, Gerhard Richter, or Christian Boltanski. Artists including Omer Fast, Arthur -Zmijewski, Emily Jacir, Sean Snyder, or Atlas Group/Walid Raad, on the other hand, are less concerned with forming a concept of history or producing images for (national) collective memory – even if, in some cases, artists like Thomas Demand dare to present their works as a “national gallery” even. Instead, they point to the narratives, aesthetics and, particularly, the notions of time on which our concepts of history are based (see the essay by Susanne Leeb). According to this understanding of history inspired by Walter Benjamin, they work more cinematically than sculpturally, often in a post-documentary fashion, employing the approach of reenactment (see the roundtable discussion with Yael Bartana, Maryam Jafri, Romuald Karmakar, and Clemens von Wedemeyer, moderated by Kathrin Peters). However, reenactment is often suspected of merely affirming event culture and fostering the belief in a seemingly unproblematic integration of the past. From a psychoanalytical point of view, integration is a process that can never succeed (see the essay by Laurence Rickels). In many artworks, “the event” itself is not “reenacted” anyway, but they instead reflect on a media aesthetic that can be discussed in a productive way using the concept of “remediation” (see the contribution by Ilka Becker).

With this in mind, it could be more productive to operate not with notions of chronology and development but with “forms of time”, in which meaning occurs in a contingent way – which art historian George Kubler already elaborated in 1962. His theoretical thread was recently taken up again by science historian Hans-Jörg Rheinberger, who in his contribution reassesses Kubler as a decisive source of inspiration for his understanding of history.

The scene change itself, consisting in the shift in emphasis from event to time and temporality, from “history” to the question of what is regarded as the past, mainly has to do with altered historical conditions. The diagnoses of “post-”, themselves subject to the course of time, are currently being quashed: no more postmodernism, no more posthistoire – a state that should have been reached in the wake of the global conquest of neoliberalism – but also: no more post-communism, if one believes Boris Buden’s “Zone des Übergangs. Das Ende des Postkommunismus”. Buden explains the new turn to history with the lack of future visions in today’s societies now seeking unexploited potentials in the past. In more recent art, the absence of future- oriented utopias seldom leads to historicism, but to a debate on the pragmatic consequences of yesterday’s utopias and thus to a heightened awareness of history. This is taking place out of the need to develop a critique of capitalism that cannot rely on communism as a historical antipode without taking its violence into account. This corresponds with the historically reflective turn of artists working on their own self-understanding within the paradigm of modernism – termed “modernology” by Florian Pumhösl – without considering only social utopias, however, but also the violent, excluding implications of modernism. 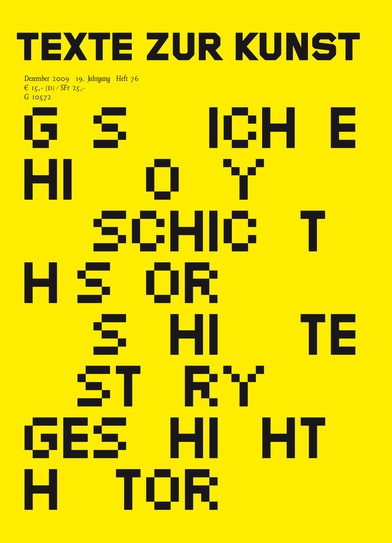