On the occasion of the 20th anniversary of Texte zur Kunst, we organized an international symposium at Theater Hebbel am Ufer (HAU 1) in Berlin on December 11, 2010. Under the programmatic title, “Where do you stand, colleague?”, lectures and panels addressed the fundamental question of the relationship between art criticism and social critique. Since everyone was not able to purchase a ticket for the quickly sold-out event and, even more, because the conference attracted great national and international attention, we decided to publish the contributions made on this evening. Therefore this issue, the first of the third decade of Texte zur Kunst, compiles all seventeen lectures and statements, slightly altered for print. The symposium “Where do you stand, colleague?” and accordingly this issue as well – following introductions by Isabelle Graw, André Rottmann and an address by Diedrich Diederichsen – was divided into three sections, each section has a thematic focus discussing approaches and methods important to Texte zur Kunst in view of their relevance to the present. When the magazine was founded in Cologne in 1990, the methods of Social Art History promised the possibility of investigating contemporary art in an expanded social, economic and ideological framework (on the current state see the panel with Benjamin H. D. Buchloh, Andrea Fraser, Isabelle Graw, and Susanne Leeb). Even though this approach is still fundamental for many authors and editors regularly contributing to Texte zu Kunst, new and advanced models theoretically examining contemporary art have emerged: In the ongoing debates on biopolitics and immaterial forms of labour under post-Fordist conditions, the long cherished assumption that (post-)avant-garde art in capitalism can be attributed to an antagonistic role per se has been radically called into question (see the section with contributions by Franco Berardi, Luc Boltanski, Sabeth Buchmann, André Rottmann, and Martin Saar). At the same time, a revision of the category of the aesthetic has taken place, which for a long time appeared discredited due to its proximity to idealistic notions of autonomy, but has now returned in the guise of an ethically founded defence of the experience of art and emphatically demanding that attention be paid to formal details (see the panel with texts by T. J. Clark, Helmut Draxler, Jutta Koether, Christoph Menke, and Juliane Rebentisch). So even if the focus was on Social Art History, biopolitics and the category of aesthetic experience, it must be expressly stated that, with this thematic positing, the significance of other concepts for analysing socio-political interrelations, above all gender and postcolonial studies, are not disregarded by Texte zu Kunst. Quite to the contrary: in the ideal case, they are also taken into account in the statements. Since Texte zur Kunst has not only stood for disputatious art criticism in the past twenty years but also for a program of artist’s editions, we opened the show “With your art” a day before the symposium. Under this heading, the second part of the title of a painting by Jörg Immendorff cited in the symposium’s title, all 180 editions published until now were on view at the Berlin Sammlung Haubrok for three weeks. The presentation, curated by the artist Annette Kelm and Matthias Mühling (director of the collection of art after 1945 at the Lenbachhaus, Munich), brought together works by artists who have supported our magazine from the very start. The picture spread in the middle of the issue shows views of the exhibition. We once again thank Arend Oetker and Brigitte Oetker for their generous support of the symposium and the twenty-year history of our magazine. We also thank Ariane Beyn of the Berlin Artists-In-Residence Programme of the German Academic Exchange Service (DAAD) for her support and the Theater Hebbel am Ufer (HAU) for hosting our conference, especially Matthias Lilienthal, Christoph Gurk, Laura Hörold and Susanne Görres for their energetic support. We are grateful to Annette Kelm and Matthias Mühling for developing the curatorial concept of the exhibition “With your art”, and cordially thank Barbara and Axel Haubrok for their hospitality. Thanks also goes to Stefan Maria Rother and Heji Shin for the photo documentation of the symposium and the exhibition.

Two announcements concerning Texte zu Kunst: This issue features a new section titled KLANGKÖRPER that offers us the opportunity not only to reflect on the politics of sound, but also to more intensively deal with music, theatre and performance, as well as to discuss issues that have recently become topical in the Anglo-American humanities in the wake of a sensual revolution, a field that, in our opinion, has not yet been sufficiently taken into account in German art studies. We also say a heartfelt good-bye to Claus Richter, whose column ENTERTAINMENT VALUES appears for the last time in this issue. Thank you very much for – as you aptly called them – the “entertaining cracks” you inscribed in our magazine. 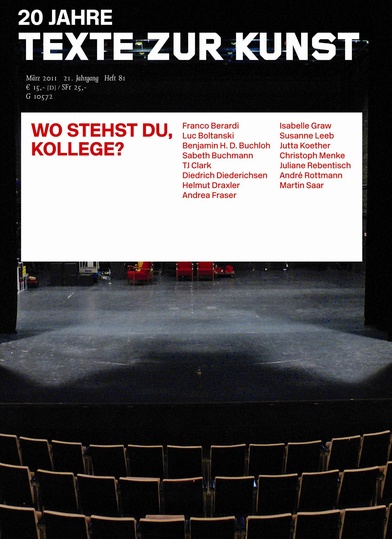