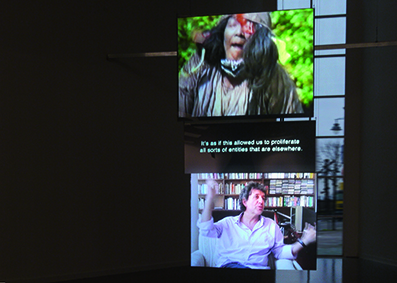 Before the introduction of the degree of doctor of fine arts had been completed, hundreds of thousands of students in Great Britain protested against the government’s plans, due to the financial crisis, to entirely cut the funding of the humanities from the budget of state financing of academic knowledge production. As a result, what possibilities are left to discuss artistic research as an “academic proto-discipline”, or as a critical levelling or homogenisation of creative practices in the wake of the “Bologna process”? This question can be answered in view of the wandering European student movements that have become increasingly interlinked in the past years, e. g., the Knowledge Liberation Front or the Universidad Nómada, groups seeking to organise a dispositif for the production of autonomous knowledge with independent institutions, abnormal universities and art institutions. Located along the lines of wandering of past -political movements, I find the following example of artistic-scientific research exemplary, for it assumes a clarifying role along the imagined front between art production and scientific production. It is hardly a coincidence that the theme is autism.

The production of subjectivity as a structure between art research and science points to questions situated in the field of “neuropolitics”: What is the production of subjectivity and how do different modes of perception express themselves in the social structure and in the juxtaposition of different worlds of perception? Art as a field of resonance asserts itself in this context beyond positivistic standards and criteria of evidence. It is generally assumed that art does not perform according to neurotypical standards but beyond the borders of political procedures of exclusion that through standardisation distinguish between “neurotypical” and “neuro untypical” bodies. [1]

Research on the neurotypical abilities of autistic persons makes it clear that it is about the ability “to pay equal attention to the full range of life’s texturing complexity”, and, as it is often similarly the case in art, to gain an “entranced and unhierarchized commitment to the way in which the organic and the inorganic, color, sound, smell, and rhythm, perception and emotion, intensely interweave into the ‘aroundness’ of a textured world … alive with difference”. [2]

In 1967, Fernand Deligny, the so-called “poet of autistic people”, started mapping the wanderings of autistic children in a free environment. He sought to replace the I-you-he-she-it pronouns in his language with the use of the infinitive. For him, autism became the model for being able to live “an anonymous fringe existence” that “stubbornly” counters subjugation by the “symbolic domestication of thinking through language”. [3] The film “Ce gamin, là” by Renaud Victor and Fernand Deligny (and many others) documents these many years of research on “nonverbal language in a nearby milieu”. The film was screened in Cannes in 1971. [4] For this endeavour, Deligny and a group of non-professional therapists and activists visited the remote Cévennes shortly before the revolts of May 1968. A barren landscape that is markedly indicated on maps and plays a role in French history, yet appears as a landscape without location, as an immediate environment in the film and which Deligny designates as a “milieu”. Later, Deleuze and Guattari use the term “milieu” to describe not only a location but a rhythmic event before it is territorialized. Deligny becomes the medium of this milieu that repeatedly constitutes itself anew, he notes down his observations on the edges of the maps, participates in shooting the film, and speaks in front of the camera using the infinitive. He is no longer the author of the film analyzing and interpreting the subject matter. He is a teacher, educator, therapist, author, filmmaker, philosopher, and poet – part of a network or collective researching the characteristic features of communication of autistic children.

In occidental history, the lack of spoken language was always a reason to classify mute, “speechless” persons as nonhumans or animals, and even to forbid them, as anthropologist Barbara Glowczewski points out, [5] the development of their own sign language, as the Vatican prevented it for deaf-mute persons during the age of Enlightenment. For Deligny, non-verbality is an act of resistance and a political attitude, for “language makes us what we now are”. It is language “with which we have obstructed our view and cannot perceive what precedes language, which we have inherited as culture”. [6] It makes a “body shared by all” disappear, a body that is not “the one or the other”. [7]

For Deligny, winning a “common cause” for the autistic children and “neurotypical” therapists was connected to the creation of a social structure in which collective filming and mapping functioned as a space of action for autistic children, researchers and therapists, and established a level of communication. Deligny’s paths of wandering do not represent a geography but a space of action in a milieu to which no territory has yet been attributed. The location, the objects, and the communication in this space signify a common, future potentiality – a future of action. That which depicted the aesthetic paradigm in this structure of perception revised the relationship between subject and object as a system of description. The autistic person’s paths of wandering later became relevant for the philosophical concepts of “rhizome” and “refrain” [8] and are until today fundamental for the neurosciences and for political networks.

Shortly before his death, the philosopher and psychiatrist Félix Guattari described the transversal potential of this aesthetic paradigm: “That which lays the foundation of the aesthetic paradigm is the excitement of grasping creative opportunities before they are applied in an artwork, a philosophical concept, as a scientific function, or in mental and social objects.” [9] For Guattari, the aesthetic paradigm is not anthropocentric but transversal, meaning that it crosses all levels of life and transforms objectifying systems of description that, as anthropologist Eduardo Viveiros de Castro states, “believe to be scientific when they remove any form of intentionality from the perception of the world”. [10] “The subject”, Castro continues, “exists everywhere. There are more subjects than people. The subject is a function of describing material relations”, which exist separately from humans.

In Guattari’s view, art is one of the most powerful means with which one can act alongside the separation between subject and object in order to charge reality “with new possibilities”. The issue, then, is to decolonise scientificalness through art and to reveal biopolitical limits through which describing, as a method of objectifying, is itself called into question. The incomplete introduction of the doctorate in art at British universities, on the other hand, is characterised by a minor relationship between science and art. To gain a doctorate in art, graduates of the University of London have to submit a written theoretical thesis with almost the same scope (80 percent) as in other discipline, i. e., artistic “practice” is not equally evaluated and recognized in regard to scope and as a method of research. The methods of art and the functions of the aesthetic paradigm itself, that is, the essential role that art plays as knowledge production in the biopolitical society of control, are therefore not equally evaluated but instead tolerated or at least diminished. The notion of grasping art as knowledge production and as a means of research is subsequently curbed in its infancy, it is an as yet unrealized potential that in the current institutional discussions on the crisis could be neutralised as a possibility of the past.

“According to autism activist Amanda Baggs, our use of the word ‘human’ designates a neurotypical norm, expressing oneself predominantly in spoken language, focused on humans, to the detriment of other elements of the environment.”