The September issue of Texte zur Kunst is dedicated to conflict and reflects on the current state of (art) criticism. The end of art criticism has been predicted for quite a while now, and some of the underlying observations do not even seem to be entirely plucked out of the air, for both the economic conditions and the imperative to establish networks in the real and virtual worlds contribute to artistic practices rarely being critiqued nowadays. If negative judgments are made, they are often immediately appropriated for advertising purposes, with any critical content simply fizzling out. One can also understand that, in face of the globalization of the art business and the differentiation processes within the field, it is becoming complicated to define a position from which critique can be formulated.

However, the consequence of this negative assessment, in our view, cannot lie in abandoning art criticism in general. Quite the contrary. It is perhaps more important than ever in the current situation. As far as we can see, the dilemma is not that criticism is no longer possible or can no longer be articulated, but that the will to engage in debates within art criticism is lacking. For what purpose should art criticism be formulated, if not primarily to enhance its own discourse? In the best case, art criticism is an open process in which contentious voices are continuously involved in negotiating the possibilities, principles, and questionable aspects of artistic production. In view of this ideal, we call for bringing contention and dispute back to the center of art criticism, to force it to engage in a serious debate.

Looking back in history, it is clear that the situation was once entirely different. Johannes Grave’s and Beate Söntgen’s essay gives insights into modern art criticism in the second half of the eighteenth century. The French philosopher and author Denis Diderot composed his reviews of the “Salon” exhibitions as a disputation, as feigned debates between his publisher, artists, and even the characters of the reviewed paintings. These debates were steered and staged by Diderot as the author, yet it was the juxtaposition of diverging opinions that revealed the pros and cons of the practices he negotiated. We have updated this approach in our conversation on dOCUMENTA (13), discussing its concept of art and curatorial conception with Christoph Menke, Susanne Leeb, and Sven Beckstette.

Peter Geimer in turn shows that the absence of judgments in art criticism is also due to the fact that art history at universities is increasingly becoming interested in contemporary art, so that both disciplines are coming closer together. Because their categories, methods, and protagonists tend to mingle, the art-historical condemnation of any kind of evaluation all too easily spreads to art-critical writing as well. Using the example of the reception of Thomas Hirschhorn, Geimer elucidates that an art-historical, hermeneutic perspective does not allow a critical dealing with the work of an artist.

Of course, art critique is not only pursued by art historians, but has also been crucially shaped by the discourses of artists, as can be seen in the case of Minimal Art, the principles of which were decisively influenced by the art reviews and theoretical considerations of Donald Judd, Robert Morris, or Yvonne Rainer, for example. Today, in contrast, artists tend to avoid participating in debates on art, for they believe – according to a widespread notion – that works ought to “speak for themselves”. Nairy Baghramian counters this tendency of the artist subject to remain silent, which seems to go hand in hand with the evocation of supposedly acting and living works of art. She calls for artists to actively participate in discourses and debates, so that the power of interpretation is not left entirely to curators, critics, and the market. To what extent conflicts can occur within one’s own artistic practice, even within the figure of the artist, is what Gareth James discusses with the controversial artist Georgia Sagri.

The fact that networking, which is often made responsible for the absence of dispute, also takes place in the digital realm additionally raises the question of how art criticism changes when images of artworks circulate in online newsletters and social networks, where the only agreement allowed is via the “like” button. Based on the Web platform e-flux, Tim Griffin demonstrates what becomes of the claim to critique when an internet business model, art project, and the distribution of theories critical of capitalism coincide: A commentary on the art domain and what it means for the future of perceiving art.

The six essays in this issue should make clear that dissent in art critique and in the debate on art in general is absolutely necessary to time and again determine its conditions and the criteria of one’s own judgments. We are simultaneously interested in contentious positions and latitude for art-critical and artistic practices, in which one thing above all is revealed: Critique and, connected to it, dispute are essential – and feasible. 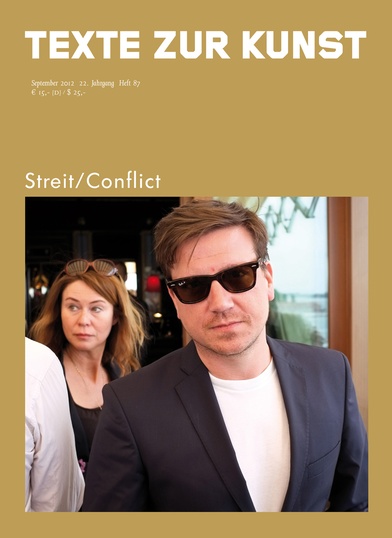