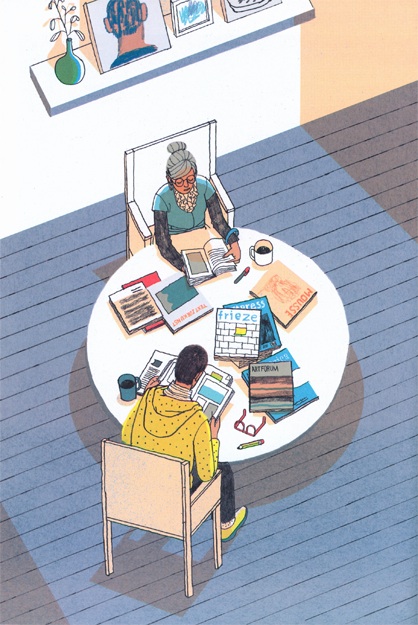 Access to the art world is one of today’s most coveted means of climbing the ladders of social distinction. There is hardly a zone in the culture industries where belonging scores as favorably on a general social scale as art: Enjoying intimacy with art and its makers, its dealers, or actual proximity to its objects. And, qua capitalism, buying art and owning it also factor more than smoothly into these parameters.

It seems difficult to imagine a moment in which loving art, and wanting to own it, have been more popular. But how are all the new initiates to choose their potential love objects? And how to own it (art), literally? Senior consultants Thea Westreich Wagner and Ethan Wagner’s “Collecting Art for Love, Money, and More” offers advice for the unsteady. Julian Stallabrass evaluates the evaluators.

In 2008, I was asked to speak on a panel about the art market with art dealers and auction-house experts at the Madrid art fair ARCO. I was a little nervous since my knowledge of the subject came mostly from reading and talking to people, and my co-panelists had detailed practical experience, honed through years of navigating the market. As it turned out, I need not have worried, since their knowledge remained carefully hidden, and all that they were prepared to offer were bland assurances that everything was going to be all right, and that slight downward adjustments in price could be healthy for the market, and were even “democratic”.

A similar problem afflicts “Collecting Art for Love, Money and More” by Ethan Wagner and Thea Westreich Wagner, who have had decades of experience as collectors, advisors to collectors, curators, and publishers of artists’ books. They are extremely well-informed, and the book contains many interesting considerations about the motives of collectors, the changes in collecting practices and the contemporary art world more generally, and many listings of notable dealers, curators, museums, collectors, and artists. As the genteel, well-regulated paragraphs of the book unfold, the attentive reader may come across softly whispered warnings: Sometimes works may be overpriced; curators may sometimes make vacuous shows; critics may sometimes hide behind jargon; dealers have been known to sell inexperienced collectors poor works; art fairs may encourage shallow collecting practices and put too much pressure on artists to produce new work. But details here are few and far between, and fundamentally everything in the garden is rosy. Of the dangers and shadier opportunities that the lightly regulated art world offers – price fixing, insider trading, smuggling, money laundering, tax evasion, auction buy-ins, concerted campaigns by investors to drive up prices, false announcements of signal prices – the reader remains innocent. The authors do not say that most collectors lose money though their purchases, and that the vast majority of contemporary art is destined for obscurity, little or no monetary value, and in all probability the junkyard. Such omissions are entirely understandable: You can hardly expect businesspeople to damage their trade over the writing of a mere book.

There is a lot of general advice to would-be collectors who are urged to cultivate long-term relationships with art-world players, to be well-informed about the art they buy, and to collect in-depth – that is, regularly and with a sense of trajectory. The advice can be condensed into the following three points:

The third may come into tension with the first, of course. If collectors are sometimes not serious and nice, it is because they collect for a mix of motives which the Wagners usefully enumerate: Social climbing, to impress friends, to compete with other collectors, for the attractions of art-world social life, media attention, money­making, and Zeitgeist surfing. None of these motives are disreputable, but they may come into conflict with each other, and in particular short-term profit-taking may damage artists’ prospects and pollute relations with dealers.

These stresses bear on a fundamental art-market contradiction that the Wagners repeatedly but ineffectually pick at. Does art “stand apart”, as they claim in the book’s concluding sentence, and if it does, what does this tell us about the relation between its value and price? The problem is a difficult one because if the two are thought to correlate too closely, and especially if price is thought to create value, then the art world is merely another stock market; if they diverge too much, collectors may be conned into acquiring a lot of meretricious junk. The solution offered is the traditional one: That short-term “distortions” of hype, accidents of geography, dealer representation, or personality may prise the two apart, but that in the long term they correlate healthily. Yet market distortions can only be identified in retrospect, relative to a new and apparently stable price point, and the faith in long-term correlation is founded on little evidence. The illusion of long-term wisdom may simply be a product of fluctuations over a long period of time looking slower. The Wagners are open about the feelings pursuing a work of art can give the collector. Before a desirable work:

“[…] millions of neural connectors are set off and information, impressions and feelings flow through the brain in fractions of a second. It’s then that something between conscious and unconscious thought is experienced and all else suddenly ceases to exist. These are especially thrilling moments, when the desire to possess can be overwhelming for passionate collectors” (pp. 9–12).

And if the work is bought, “feelings of mastery”, and of “control, potency and conquest” result. The insistent metaphor is of the hunt, as if works of art were wild creatures to be discovered, brought down with skill and acumen, and returned home as trophies. The metaphor has definite limits but surely the model here is less Hemingway on safari than the grouse shoot. Like those hapless, semi-tame and overfed game birds, art has been bred, raised, and fattened solely for the shoot, and specifically to cater to the shotgun-and-Barbour set. The more contemporary art has become mainstream (and no longer a small if rich subculture), and the more it has become saturated with money, the tamer, more regular and instrumental the calculations made on all sides, not least by artists themselves. The Wagners rightly note the increasing and unprecedented use of contemporary art to add “cultural cachet” to shops, offices, and sports venues, and to draw in tourists (p. 44). They also relay, without registering any irony, their involvement in patronizing a venture to set up a program of talks and publications to defend drawing against “its instrumentalization by the market” (p. 53).

Aside from references to the hunt, the book’s tone is far from wild. Its chapters are punctuated by a series of brightly colored line drawings showing collectors at openings and auctions, or quietly reading art magazines or enjoying a painting that they have collected, along with a glass of wine. The air is of calm contemplation and rich intellectual reward. Yet very occasionally the text conveys another impression:

“Biennials provide shopping and networking opportunities of extraordinary scope and scale” (p. 141). The word “shopping” may be a slip, since collecting is usually decorated with more elevated terms, but such deflationary words are surely useful in registering how mainstream contemporary art has become: Why not say that collectors are shoppers, dealers are shopkeepers, artists are manufacturers, curators are window-dressers, and critics consumer and lifestyle journalists?

To go back to the advice to “be rich”, the Wagners say that it is possible to collect on a budget, and offer various examples of prominent and successful collectors who have done just that. What this means is to regularly be able to afford to spend a few thousand dollars buying works of art by young and relatively unknown artists. The higher reaches – the “0.1%” in Andrea Fraser’s description, who dominate the market and whose tastes increasingly govern the art world as state institutions weaken and private museums proliferate – clearly inhabit a world of their own. [1] But even those who every month or so find that they have a few thousand to spare are sharply divided from the rest of us working dopes who wonder whether we can cover the rent or the mortgage.

There are moments when the Wagners register the peculiar character of their activity, particularly to those outside the art world, and even sometimes to those inside: One of their friends thought that they were crazy to buy sinks by Robert Gober (in the days before he became celebrated). The popular incredulity of those who are weighing up whether to spend money on eating or keeping warm, or worrying if they have enough to replace a worn-out pair of shoes, toward those who spend what for them would be life-transforming amounts of money on a pair of dysfunctional sinks is surely no matter of cultural ignorance. For them, such actions cannot but seem ridiculous and obscene; and the showing off, social climbing, and competition of collectors is founded on its very absurdity.

The book also contains a short section on the waning power of critics, who are no longer feared in the art world. Yet, say the Wagners, they should be read if only because they can direct collectors to worthwhile art. They do, after all, retain some influence: “[…] just ask a Manhattan gallerist what happens to crowd size and collector attention following the publication of a review by Roberta Smith in The New York Times. There are also vital publications – Artforum, Parkett and Texte zur Kunst, to name but a few […]” (p. 129).

This is indeed the critic’s main power: Not over what is written, but whether something is written about or ignored. And so this piece dutifully draws attention, in one of the right places, to the existence of the Wagners’ book. It would be silly for the authors to object to anything in its content.