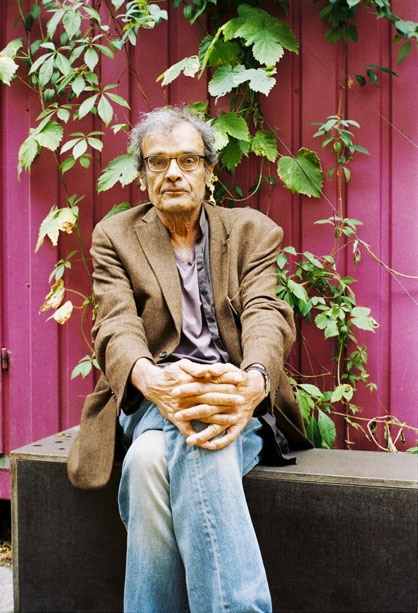 The catastrophic news of Harun Farocki’s death reached me in Portugal; I’m on vacation. An obituary is urgent business, but of course I have none of the countless papers here that I would like to quote from: magazines, books, pamphlets, seminar syllabi – a trove of documents I wish I had readily at hand. They would help me sketch out at least some impression of the loss we all have suffered. And Harun Farocki didn’t just do his own work; in the last twenty or twenty-five years, in particular, he connected so many projects, people, events, and institutions to each other – so large was the network he created and animated with his spirit – that his death not only affects us who mourn him; it also profoundly impacts the milieu that sustains this publication (as well as others such as Cargo, Revolver, Trafic, etc.) and our ability to go on with our day-to-day work, perhaps more than we can say. What a mess.

I discovered the journal Filmkritik in the late 1970s. What I read was the first effective antidote to my adolescent desire to write poetry. Frieda Grafe’s articles were one model I admired, but by the more recent issues she’d stopped contributing. The other, more influential and innovative model in those issues from the 1970s, I found in Harun Farocki’s writing. I’d never read anything like it. The person, the voice, the author, the unmistakable je ne sais quoi: It wasn’t constructed as an expression of subjectivity; on the contrary, it offered a fully impersonal focus on the matter at hand. Here was a third way, neither the new subjectivity nor academic prose. Neither Handke nor Marcuse. A rigorous and yet fluid application of critical categories to objects of widely varying dignity: the bureaucracy of public television stations, railway-station movie halls, dense descriptions of films, the most recent Hollywood productions, a leftist subculture getting long in the tooth. It took a very special sense of humor to confront such a mix. But this writer never flaunted his humor like a personal virtue, like a possession he wielded at his discretion. Rather, it appeared to be sparked when he unleashed his thinking on the world in the right way, a thinking that didn’t pose as singular: that readily revealed that it availed itself of basically all available “true ideas of humankind.” In the realm of thought, in the universal access to ideas, the revolution had in a way already taken place: a cool, fair, unostentatious, self-evident revolution. Writing of the non-revolutionary matters of the world with all that knowledge could have come across as bragging, authoritarianism, pretension, or worse, even a failure of materialism: Which conditions produced these ideas? Harun maintained the necessary gulf between the lucidity of his own writing and the murkiness of reality by dint of a paradoxically warm and friendly sarcasm, all the while making sure that communication was never lost. His long narrative columns (“Neues vom Wixer”) and his brief notes were incredibly funny. At one point, I could even recite some of the sentences verbatim, for example, lines from the column in which he suggested that the new crop of city magazines might as well run their culture pages in the telephone book.

I first met Harun in person in the early 80s. With two colleagues for Sounds, I’d interviewed Jean-Marie Straub and Danièle Huillet. The two filmmakers were in Hamburg to shoot “Class Relations,” a film based on Kafka’s “America” starring Mario Adorf, Libgart Schwarz, and others. Harun effected a subtly disturbing malice in the role of Delamarche (one of poor Karl Roßmann’s tormentors), a part Klaus Löwitsch had played in the 1969 TV adaptation of the book. I never talked to him about it, but I think he, too, may have been amused that Löwitsch and he had embodied the same character. He also made a film about the shooting, “Jean-Marie Straub und Danièle Huillet bei der Arbeit an einem Film,” 1983. Two days after our interview, he and a sizable group of people involved with the project were at Café Schöne Aussichten, and we joined them. He entertained the entire table, but his manner was the opposite of the entourage-impressing acts that were then an all-too-familiar feature of young artists’ hangouts. He was not the triumphalist lead singer but an inspiring bass firing up those around him, though his sharp mocking twang never left his voice entirely.

I didn’t yet know his films though. The festivals and the country’s smaller public broadcasters (which were noncommercial film’s primary distribution channels at the time) may have offered advantages we now remember fondly when compared to the dominance of today’s art world and its economic structure, but they also had considerable disadvantages: for instance, someone like Harun Farocki couldn’t attain the immensely influential position he merited until he forged an alliance with said art world. In the 80s, I saw this and that on television and was repeatedly smitten, especially by smaller pieces like “Schlagworte – Schlagbilder: Ein Gespräch mit Vilém Flusser” 1986, in which I recognized the fundamental gesture, that laconic straightforwardness that I knew from his film criticism. But then, crucially, I also saw more and more of the major works by this defender of minor forms: “Zwischen zwei Kriegen,” “Wie man sieht,” “Etwas wird sichtbar.” To someone of my generation, these films gradually revealed how much further the most advanced representatives of what’s called the ’68 generation had actually come with their critique of aesthetic ideology than the caricatures we’d encountered at school or university or in subcultural contexts had managed to make us believe. Yet as I saw these films, mostly after 1989, Farocki’s critical focus had already shifted again: from a systematic critique of capitalist civilization—not sparing the critic’s own role – that intended the revolutionary abolition of that civilization to a disillusioned assessment of the present condition. “Videograms of a Revolution,” about the Romanian uprising in 1989, reconstructs the role television images played in the overthrowing of the regime, but it also grapples with the undeniable fact that this revolution of 1989 was directed against the communist tradition.

And yet, his sweeping diagnosis of the contemporary world – from “How to Live in the German Federal Republic” to “The Creators of Shopping Worlds” – do not result in cynical amusement about the inevitable. Taking its cue from the specializations rightly associated with his school of social critique in moving pictures: 1. consumption and consumer culture; 2. labor, learning, and their transformation, from industrial labor to information capitalism; and finally, war between industrial genocide and cybernetic military technology. What set the various phases of Farocki’s project apart from one another were not undialectical attempts to escape positions he had abandoned; the elements of his overall project are interrelated and, in their sequence, tend to add up. Even as a teenager, he wrote about semiotics and linguistics (crazily enough, for outlets like the Spandauer Volksblatt); later, but still before his Filmkritik days, he dealt with sign theory in the magazine Film. Since the 70s, a political-economic critique has been the guiding purpose in all his productions, but that critique is so saturated with theoretical reflections about language and semiotic scholarship that it can identify shot and counter-shot as the “preeminent expression in the law of value that is film.” In the late 1980s and early 90s, he immersed himself in media studies, including the writings of decidedly non-Marxist authors like Friedrich Kittler, but not to simply supplant what he’d known before.

We came to know each other around 2000, after I’d moved to Berlin, where we found ourselves debating each other before a wide variety of audiences: in private apartments and galleries, at public workshops, summer parties, and art academies; in Vienna, where we both worked at the Academy of Fine Arts, but also in Sligo, at Europe’s far western end. We would talk about his work or about selected movies, from Brian de Palma to Mike Figgis and, needless to say, Jean-Luc Godard. It was always a true pleasure, the very rare case of a public discourse that didn’t feel like work at all. There it was again – the gesture, the attitude, that had so deeply impressed me when, as an adolescent, I discovered Filmkritik: in the well-informed conversation utterly devoted to the substance of the matter, the revolution had already taken place and production was no longer labor.

In the 1970s and 80s, the art-world public in which these conversations occurred and in which we collaborated was different from the filmmaker’s universe, but different also from the various present-day film scenes in which Farocki – as a filmmaker, but in other capacities as well (he was also a producer and screenwriter who had a long working relationship with Christian Petzold) – continued to operate. You might have dealings with him at a gallery (he had close affinities with Alice Creischer, Constanze Ruhm, Andreas Siekmann, and Hito Steyerl, among other artists) and curated major exhibitions including, “Cinema Like Never Before” (with Antje Ehmann) in which very different facets of his praxis coalesced: the imperceptible transition from the argumentative register to a didacticism of showing whose laconic style both suggested its relativity and strengthened it. He didn’t advertise the crossover and in-between formats he worked with in the past two decades – installations, constellations, presentations – as big steps and transformative innovations. He adopted them with the same natural ease he demonstrated when switching from column-writing to filmmaking, which is to say neither as a so-called Renaissance man nor as some present-day whiz kid arts entrepreneur; far from obfuscating the real differences, he bridged them by virtue of the integrity of his intellect.

Precision and matter-of-factness: he brought these qualities to bear not just on his objects, but also always on the specific technology, media, and politics that he used to engage them – images, words, spaces. The rise of the digital and other new media was no occasion for cultural pessimism. Most recently, in the series “Parallels I–IV,” he explored the evolution of videogame imagery using the example of how trees are depicted, provisionally concluding with the speculative forecast that digital pictures might relieve photographs of the obligation of representation the way photographs had once upon a time freed painting from the same. The starting point for a conversation, one of innumerably many more, I would’ve liked to have with him.