Though dreams persist of a bygone pure photography that objectively mediated reality and the human mind, the photographic image has never, in fact, brought us any closer to the so-called “real world,” which is incalculably far away. In this issue of Texte zur Kunst, we take ­“photography” as theme – not to mourn its dissolution into digital image making, but rather to consider how photo-based media operates now: What information do we ask it to carry? What facts do we trust it to convey? What does it now allow us to see? Indeed, photography, rather than fading from use has only become more present, what with imaging devices now integral to our every interaction. Who can dispute that the photograph has become the primary base for establishing one’s identity, for cohering a social body? In a sense, the photograph has become our material support, the substrate across which today’s human subject can be drawn.

This issue therefore takes on photography not only as a medial category, but also in terms of its reciprocal relationships with other visual forms. Central to this discussion, Peter Osborne, in his contribution to the issue, offers an analysis of the digital photograph in its double role: as signifier of a past technological form (tied to a rhetoric of indexicality) on the one hand, and as a way of visualizing new data and the digital “meta-medium” on the other. In this, Osborne connects the ontology of the digital image to that of the photograph’s role in postconceptual art. Tracing this forward, he emphasizes the way in which photographs now work, perhaps above all else, to produce the social, which in turn alters the social reality of the image.

Giving further context, Benjamin Buchloh and Isabelle Graw, in their exchange for these pages, consider what is (and was) meant by an image’s relationship to the “index” and, with this, the index’s relationship to some notion of the “real”; some idea of lived life, authentically displayed. Arguably, as Osborne also notes, the desire to sever ties between sign and referent in the photograph was already functionally manifest in Conceptual art. Free from the obligation to tell the truth, the photograph has since found meaning beyond the particular conventions of representation (e.g., stock photography, memes, re-grams) and sites of presentation it had long been assigned; indeed what can’t display/transmit an image now? And yet, as Michael Hagner – who, with Benjamin Buchloh, advised this issue – investigates in his essay, the analog printed photobook has developed, however improbably, a massive (and apparently growing) market in the past decade. Offering background on the format’s fundamental role in the twentieth-century distribution (and commodification and theorization) of photography, Hagner considers what it might mean, with the photobook’s post-millennial revival, to recommit these liberated images to a life offline.

Like so many things now in a state of “trans,” the photograph’s fluid identity/materiality is now popularly embraced. Yet for a long period after the 1980s rise of consumer-oriented digitality, the status of photography seemed in crisis. In his text for this issue, Clemens Jahn takes a look at the 1995–97 exhibition “Photography After Photography,” which, sponsored by tech-industrial giant Siemens, addressed photography’s dissolution into digital image making – and, by implication, corporate control. Two decades later, the question of how an image can represent a segment of reality has given way to the question of how an image can function within it.

To bring this discussion into the realm of praxis, we have asked artists Loretta Fahrenholz, Anna Gaskell, Seth Price, and Timur Si-Qin to share their thoughts. Of the lot, only Gaskell might present as a photographer-artist in the first degree. Known for her dreamlike images in the vein of Sally Mann and, most recently, a sweeping filmic portrait of artist Sarah Morris, Gaskell here challenges not the camera’s ability to represent but rather the subject’s willingness, or even capacity, to appear in some true “natural” state. Against essentialist readings of meaning/identity, Timur Si-Qin, in his work, frequently uses heavily manipulated, often digitally constructed stock “photographs,” disrupting the sign-referent relationship. In this issue, Si-Qin argues that the photo-image in its own right attracts power; that its agency is not in fact contingent on some pre-existing material thing. This operation is clearly evident in Seth Price’s practice, which perhaps for this reason frequently opens itself up to infinite remediation and distribution. Here, Price, recapitulating a lecture on magic, casts photography as a structure of belief. If commonly held “truths” are what define a community, it is precisely in the service of imaging our own micro-social spheres and not towards some exoticized “other,” notes Loretta Fahrenholz, that our interest in photography now seems to be sited. Fahrenholz, whose film- and other photomedia-based work actively punctures such zones of enclosure, writes here on photography’s split character as enabler of free expression and of social control.

In this issue, we address photography in order to engage with a form that has become so much more than just image. While the photograph had long been a vehicle for information dispersion, now it functions as a space of interaction, indeed has become information itself: the photo as reality rather than simply denoting it, the photograph as affective machine. As Robin Kelsey tells us in his essay, the image’s gaze is now omnipresent, not only via the cameras on our phones and other interfaces, but, seeing as it is via the photograph that we have created our vision of the world, the photo-image now observes us. It has pervaded the social field as net, as reticulation, as a set of coordinates that constantly carries and defines us, locating our bodies and beings in its lens. 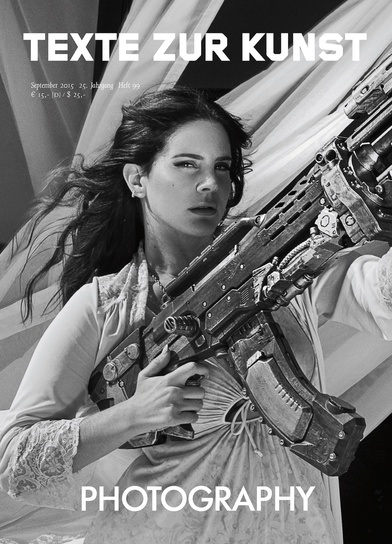