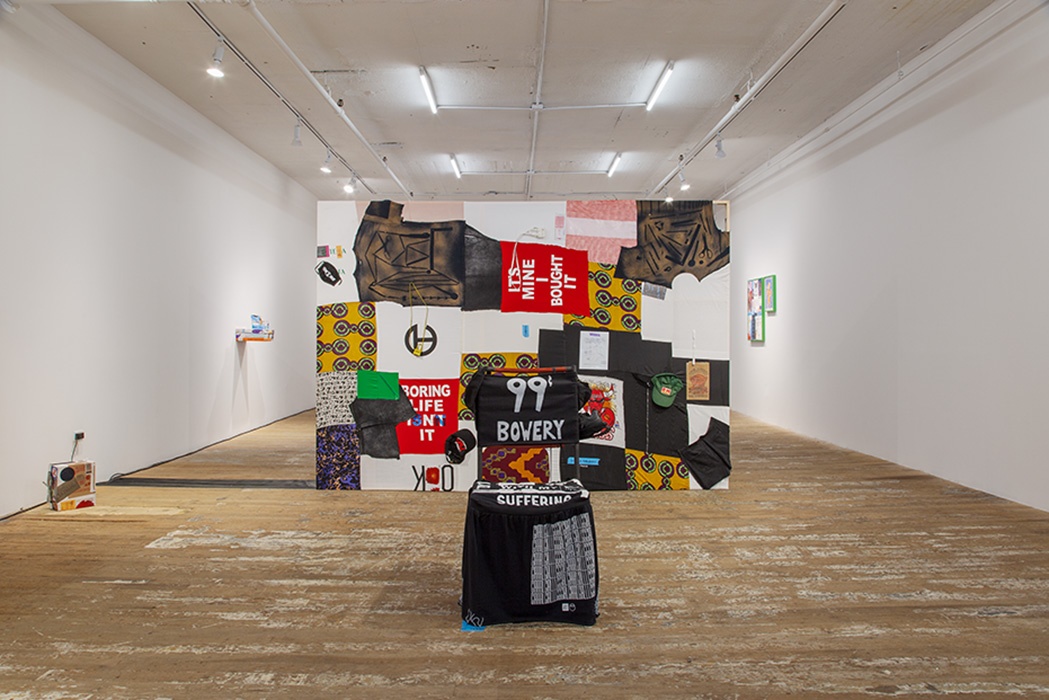 Digital space has changed processes of self-formation: it has expanded the limits of identity and access, but it has also enabled their heightened surveillance and policing. Martine Syms’s most recent exhibition at Bridget Donahue – with videos and sculptural collages that traverse the autobiographical while remaining firmly grounded in an invented world – lands squarely in the middle of the dilemma of the digital, argues art historian Adela Kim. As Kim observes, Syms suggests that while technological mediation beguiles us into believing that it is cordoned away within our screens, it reaches far into our offline lives. Between investigations into presence and absence, identity and technology, the show ultimately produces a ghostly aura of desire and loss that cuts through the chaos of the images.

Ded. How many times have we mindlessly typed away these letters in response to a grumpy cat meme or an embarrassing Tinder date? The message—or the viral TikTok—is so outrageously funny that we have all committed an untold number of metaphorical self-deaths. But how many times, too, have we seen actual deaths circulate with the same ferocity on our screens, from George Floyd pressed up against the pavement to terrified Afghanis falling from the US military plane? All from the safe harbors of our homes, where we shield ourselves from the ravaging global pandemic. Entrapped in the merged worlds of the virtual and the actual, we may as well be both ded and dead.

The entanglements between presence and absence, technologies of mediation, and identity are at the core of Martine Syms’s recent solo show, “Loot Sweets,” at Bridget Donahue. If Syms’s works have previously attended with ambivalence to issues of self-formation and media, the latest series of works take on a more intimate and at times heart-rending tone. Take DED (2021), a video installation situated squarely in the center of the gallery. In the work, Syms appears as an avatar in a boundless space and dons a white shirt that reads on the back, “TO HELL WITH MY SUFFERING.” For the duration of the video’s fifteen minutes, Syms shoots herself in the temple, runs a knife across her stomach, and falls off a precipitous cliff. No matter that the deaths play out quite graphically, with blood gushing from her head or her body being dismembered; Syms returns to life after each death. These scenes are strung together by Syms’s wistful singing: “May I be well. May I be happy.” 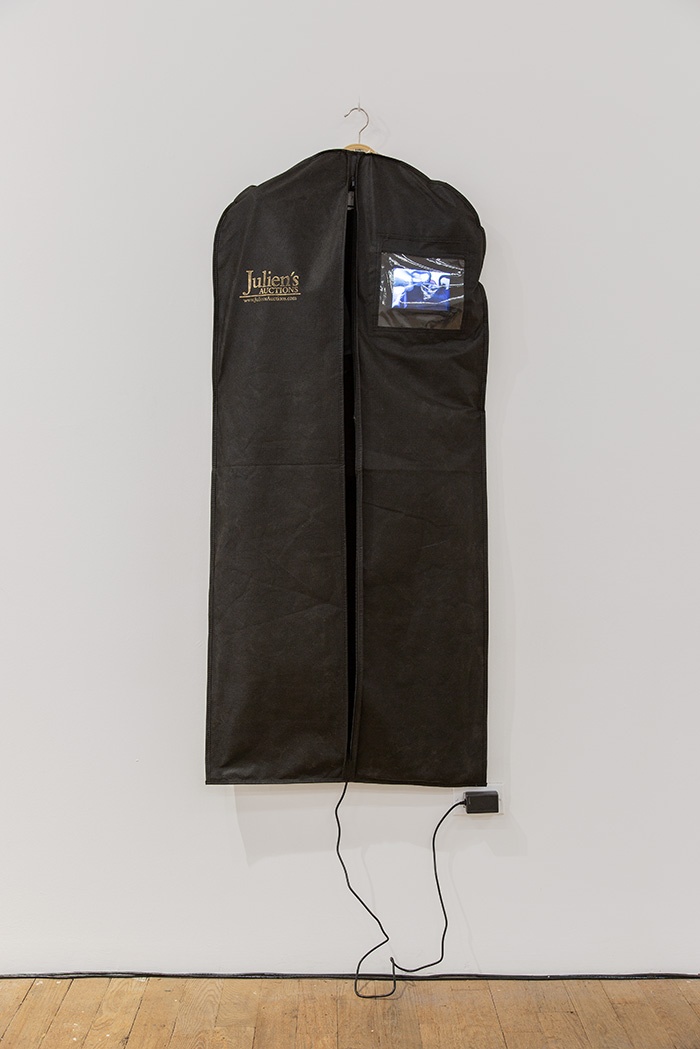 In the work, the tension between absence and technology plays out relative to isolation and the haunting specter of COVID-19. As the camera pans horizontally, Syms never directly looks at the viewer. Her eyes trail off into empty space and appear dead. At the same time, when other people feature in the film, they each remain sequestered in their own space, glaringly oblivious to each other and to Syms. Absence and seclusion blur into and magnify each other, much like our experiences during the pandemic. The installation itself also draws attention to our imposed condition of isolation; there is but one chair in front of the screen for the viewer to sit in, thwarting (or at least hindering) collective reception, lest we forget to socially distance. This issue then becomes reversed into a question of presence in Kita Meditating (2021), installed adjacent to DED. The work-cum-meditation guide features a familiar backdrop of soothing natural vignettes, such as aerial views of mountains. But its ordinariness is offset by the digital character Kita. Based on the figure from the Black Entertainment Television (BET) series Cita’s World, Kita asks us to “stay here and just observe.” As the work goes on, the digital meditation guide – hackneyed in our overwired and operationalized lives – perverts into a charged question of presence. What could be more jarring than a virtual character demanding that we imagine ourselves as a three-dimensional object? How, indeed, are we present?

For the rest of the exhibition, these questions of presence and absence become tied in more broadly with identity and technology. Oft anchoring the discourse on technology is its impact on subjectivity, such as on Jean Baudrillard’s critique that our interiority has forcibly become extroverted. [1] Departing from these takes, numerous Black theorists have recently offered a more nuanced interpretation of the digital realm as a possible emancipatory space. One such example is Legacy Russell’s proposition of “glitch feminism,” through which she argues that errors or program failures encountered online could pose a “threat to normative systems” and augur “new constructions of identity, politics, sociality, and potentiality.” [2] Syms lands squarely in the middle of this debate. In Soliloquy (2021), another video work, Kita reprimands our generation from her Cita’s World set for being “social media test dummies” and “having no momentum” or “resolution.” Against various found footages, such as a video of falling statues and a movie clip depicting a Roman Empire chariot race, Kita warns us to eschew being the “most inoffensive” and to embrace change. For Syms, technology (like glitch) might pave the way for liberation and “world building outside of imperialist, capitalist, white patriarchy,” [3] but we must still be wary of falling into yet another set of essentializing set of identities, prescribed and authorized by technology.

It is no coincidence that thus far, the present review has not addressed the many non-moving-image works – photographs, sculptures, collages – manifestly staged in the midst of these video installations. Positioned throughout the perimeter of the gallery, the series of video works play in sequence, one at a time. This decision could be attributed to the desire to eliminate any overlapping sounds. Still, this particular staging has the effect of obliging visitors into a loop: we dutifully walk around the gallery, viewing one work after another. It becomes too tempting to follow the prescribed digital loop than to pause to examine the many T-shirts adorning Dominica Publishing Paris (2021), for instance, even if it shares the same wooden plank as DED (2021). Ironically, we perform the very absence against which the works exhort us. Close by yet unacknowledged, the numerous sculptural installations serve as witnesses to our complacency.

Not that Syms is drawing a naïve dichotomy between the virtual and the material. On the contrary: Syms suggests that while technological mediation beguiles us into believing that it is cordoned away within our screens, its reaches are far into our offline lives. In Martine Syms Merch Table (2021), mixed media such as plastic, indigo prints, and tape allude to, if not traverse, the online world. We see the vintage sticker “T.V. Made Me What I Am Today,” a physical reminder of TV’s analog past, as well as a DoorDash receipt from a restaurant – a paper trail of digital service delivering sustenance. Simultaneously, a used box is cut to resemble the pillars of a colosseum, a visual reference that echoes Syms’s chariot races from Soliloquy. Perhaps most explicitly suggestive of technology’s pretentions is a small still image of fireworks displayed on a screen. Ever so dimly lit, it presents itself as a printed image to the undiscerning eye.

Given the sheer presence of mass commodities and their imageries, skeptics might consider these installations yet another instance whereby capitalism, hand in hand with technology, supposedly forges our identities for financial gain as we negotiate our livelihood. In particular, Dominica, Inc., a publishing imprint founded by Syms and “dedicated to exploring blackness,” features heavily throughout the exhibition. The “99 Cent Bowery” hoodie and a white long-sleeved shirt with the name of her radio show, “CCARTALKLA,” mark Syms’s identity as a “conceptual entrepreneur” as much as they reflect the terms in which Syms performs and wears the hat of an entrepreneur.

Still, a ghostly aura of desire and loss ultimately emerges, cutting through the chaos of the images. In Loot Sweets (2021), the eponymous installation work of the show, we face a black garment bag from Julien’s Auctions. In the breast pocket, a small screen plays the video of the auctioneer diligently showcasing the garment, which apparently belonged to Janet Jackson. With the bag’s zippers open just enough to reveal a tantalizingly small glimpse of the outfit, the work both indexes and conceals Syms’s yearning. Our selves may be fragmented or otherwise lost, but our desires live on. Though it will not be long until they intermingle with pain. Among the numerous featured business cards in the exhibition are those of Asian massage parlors, featuring stock images of bodies being pampered. These cards of care and community are tinged with sadness from the unspeakable tragedies in Atlanta earlier this year.

Syms states in DED: “We’ve never been here before, and we’ll never be here again. […] I just want to feel something. Come find me.” Indeed: in the exhibition, we witness a simple handwritten letter finding its way to Syms. Written by a person named Sachi on a Comme des Garçons letterhead, the note reads: “Dear Martine, Thank you for shopping with me Wish this bag will be your great partner <3. Please stay safe and healthy there!! PS: Love your work!” What could be more symbolic of Syms’s angst, desire, and plea than such a letter?

Adela Kim is an art historian based in New York. She is currently pursuing a PhD at Yale University, and her dissertation examines the status of critique in the work of Andrea Fraser.