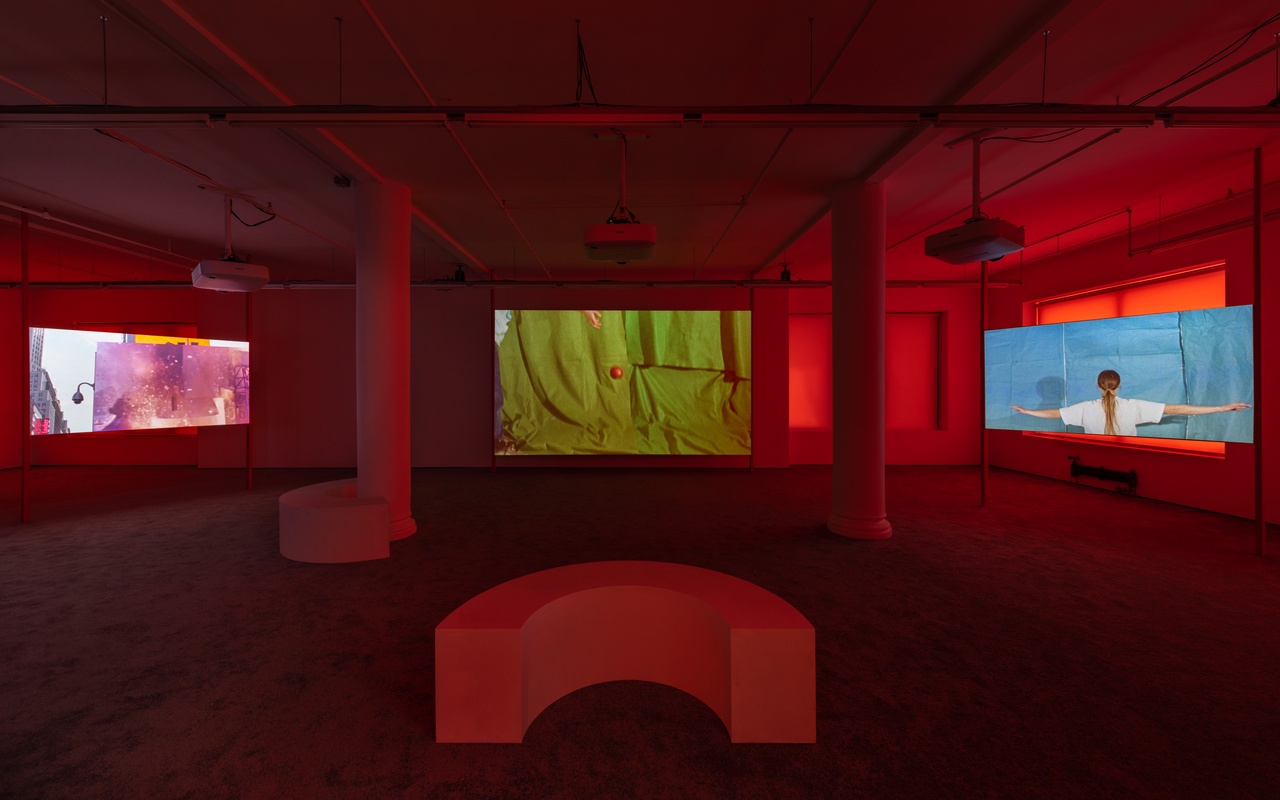 During the pandemic, the term “doomscrolling” entered the mainstream lexicon to describe an action that has become familiar to many: endlessly scrolling through tweets, Instagram posts, news sites, absorbing a constant and relentless stream of information, often anxiety-inducing. Time becomes warped in this digital vortex and our psyches imprinted by its affective register. Sara Cwynar mimics this experience in her current exhibition, culling a vast library of images, videos, and citations. Here, writer Blake Oetting likens this formal strategy to a phenomenology of the feed. What appears to be a totally chaotic field of stimulation, Oetting argues, actually approximates the nefarious capacity of tech companies to rationalize the cacophony of everyday life into strategic subjectification, similar to targeted ads and suggested searches.

It is difficult to imagine how images might begin to redeem themselves. For decades, artists have probed the photographic apparatus to seek out its pressure points and problematize the medium’s supposed objectivity, leaving behind a trail of differently stressed indictments that successfully disabused us of the truth claims subtending representation. Some, like Lorna Simpson or Barbara Kruger, structure their critiques through processes of deconstruction, dissecting and laying bare the mechanisms through which images enunciate. Others aggregate. In Sarah Charlesworth’s Modern History series, started in the late 1970s, the artist isolates the images reproduced in newspapers – removing text from the page – in order to emphasize their ideological use-value in the reportage of events around the world. When installed alongside each other, Charlesworth’s excised images gain coherence through the relationships worked out within the condensed mediascapes they help construct. They arrive in front of their audience as, to use David Joselit’s term, an image “population,” whose “power lies in its staging of a performative mode of looking through which the single image and the network are visible at once.” [1]

It is this latter strategy, the aggregational impulse that places images in relation to their distribution, that also structures Sara Cwynar’s current exhibition at Foxy Production in New York. In place of Charlesworth’s careful sleuthing through printed matter, however, Cwynar’s work takes aim at the rapacious, algorithmic accumulation practiced by tech conglomerates and government agencies, updating the scope and pace of the image population’s formation. Carried out between a scenographic complex of projection screens and monitors, Cwynar’s exhibition charts late capitalism’s efforts to metabolize our personal data through streams of images taken from the artist’s own repository – food, cartoons, a Van Gogh painting, and fashion models are but a few examples of the artist’s phantasmagoric display – interlaced with video footage, some appropriated, some the result of auto-ethnography, some more self-consciously choreographed in the artist’s studio. Here we find an image overpopulation, whose scale seems to obviate the analytic bite of those critical strategies employed by Cwynar’s predecessors. Rather than rescript, tear down or parody, the artist opts to model our collective “Glass Life” – the title of the exhibition – as a possible first step in grappling with an omniscient technocracy for whom even subversion is seamlessly incorporated into its logic of domination. As the voice narrating the exhibition (that of Paul Cooper, with Cwynar chiming in from time to time) points out, “Since the order of the world is shaped by death, shouldn’t we fight? YES. But your victories will never be lasting.” [2] 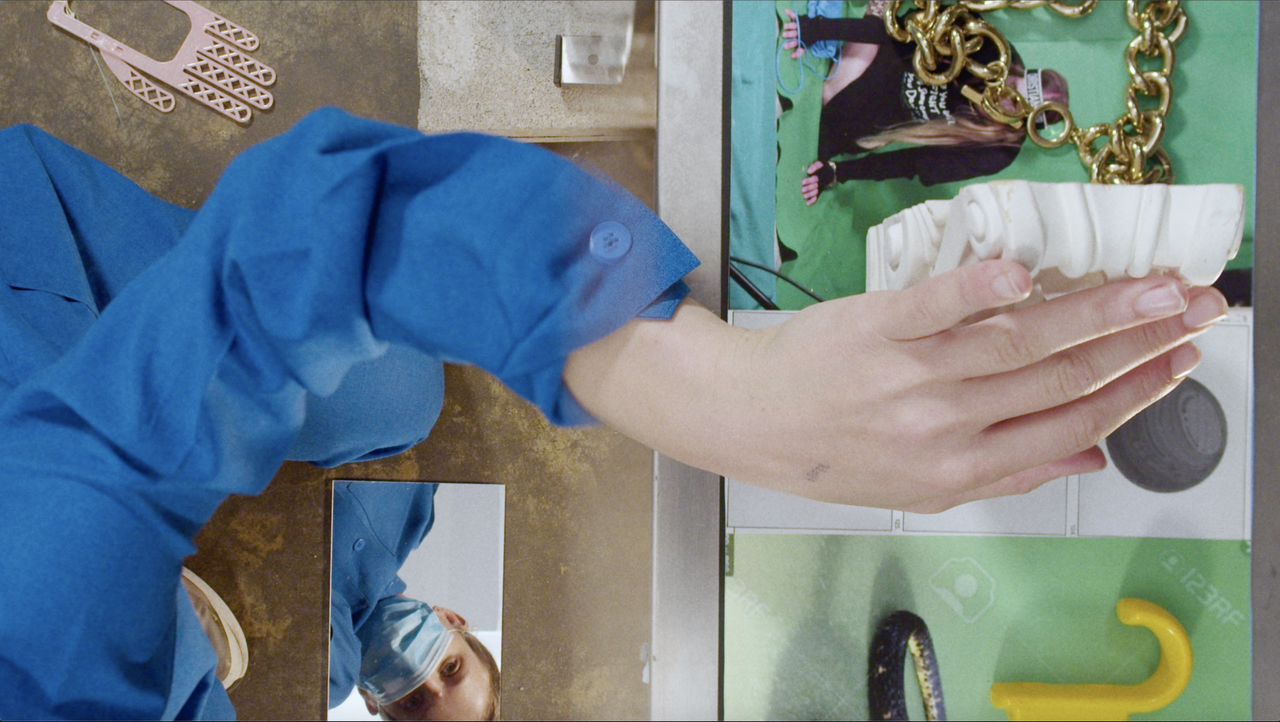 The six screens that compose “Glass Life” are distributed throughout the gallery in a half circle, which viewers ceremoniously enter through a red curtain. Their arrangement is made to feel environmental, the film’s fragmented progression playing out on screen but also spatially, zipping across the room and back again. Each component’s image-flows are obliquely aligned with the film’s spoken narration, which outlines the thematic contours of the show through theoretical and vernacular prose (invoking everyone “From Walter B. to Kim K.”). They speak of alienation, of the commodity and its increasingly homologous relationship with subjectivity, of Big Brother, of his worker bees – you and me – and of the anxiety such surveillance instigates. The imagery and video accompanying their speech helps corroborate the experience of the disempowered pawn they speak of. As the viewer turns their attention from screen to screen they are thrust into a sort of tug of war, tossed back and forth in time. For example, a little more than halfway through the film there is a sequence of video footage shot within a shoe store. The three larger projection screens collectively present the store from Cwynar’s point of view, but each from a different angle, filmed along various paths through the space. Here, Cwynar takes advantage of our inability to see the entirety of the installation at once to program a rather disorienting viewing environment. Her work rolls along at the edge of comprehension, its full range forever out of grasp, pieced together by viewers turning their heads from left to right. The store itself transforms from a physical location into glimpses of discount markers and fashionable heels, something like a commercially laden supercut. Viewing this section of “Glass Life,” and much of the rest, recalls the disjointed swirl of content populating our Instagram and Facebook pages. What Cwynar distills, we might say, is the phenomenology of the feed. 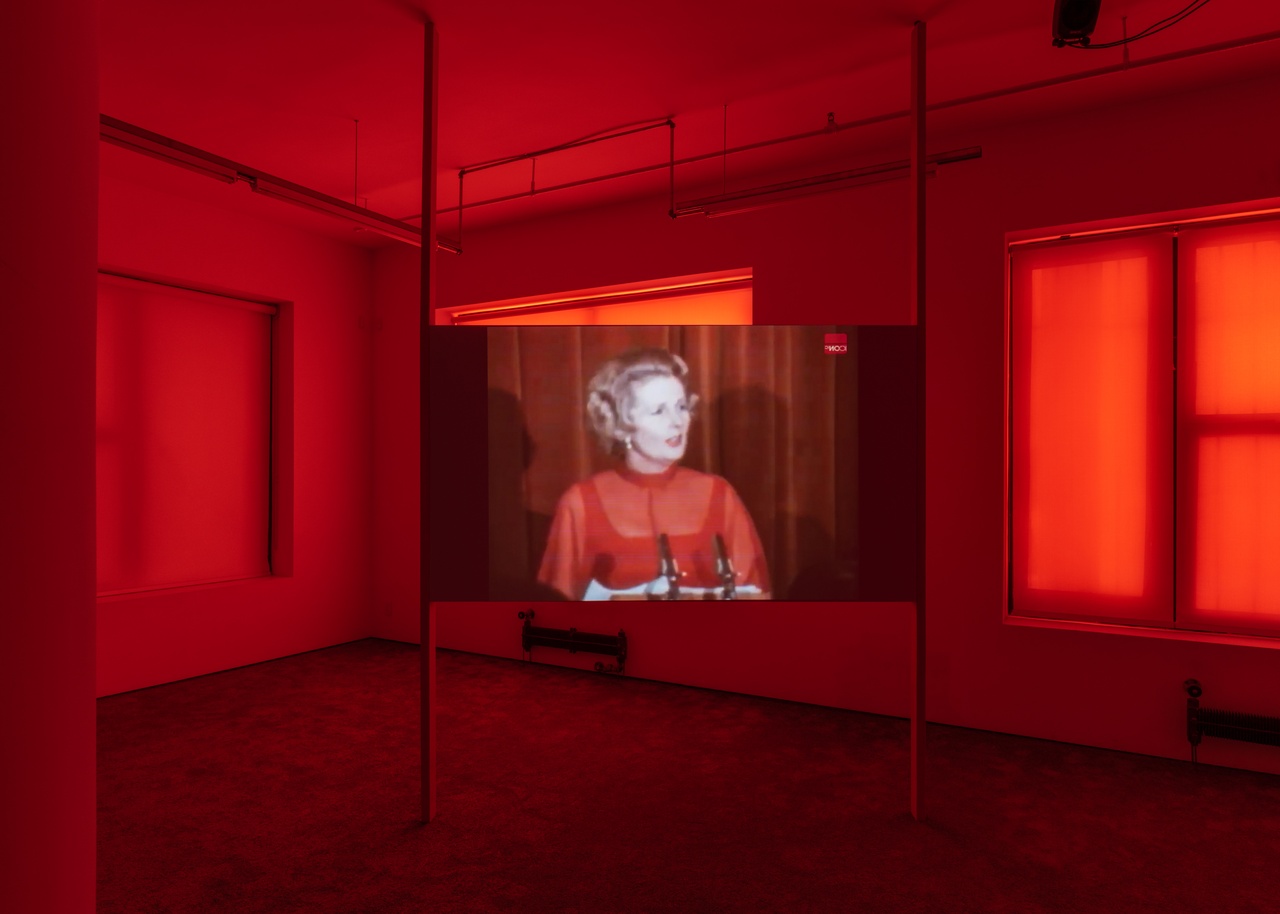 Ultimately, however, one has the sense that whatever we miss in her video, whatever passes by us in one place while we fix our attention somewhere else, will inevitably loop back into the recursive dialogue articulated between each of the screens, seeping into our audiovisual subjection whether we like it or not. For example, at one point a speech by Margaret Thatcher begins playing on the installation’s rightmost screen, only to be followed moments later by a series of stills from the same event, projected just next door. Earlier on, Cwynar and Cooper ask, “Can an apple fall upwards?” and we realize we’ve just seen the artist affirm it certainly can, several times in fact. Cwynar’s video functions through a temporal structure that mimics a mobius strip, where past and future are destabilized and de-differentiated through a set of recurring motifs, like the anti-gravitational apple, that end up as winking auguries, the promises of things to come. What appears to be a totally chaotic field of stimulation, therefore, actually approximates the nefarious capacity of tech companies to rationalize the cacophony of everyday life into strategic subjectification, similar to targeted ads and suggested searches. If Keynes says, as Cwynar quotes, “knowing the past doesn’t give you any purchase on the future,” “Glass Life” demonstrates just the opposite, that our history of behaviors, speech, and scrolls is, for the captains of (tech) industry, the material upon which they speculate. 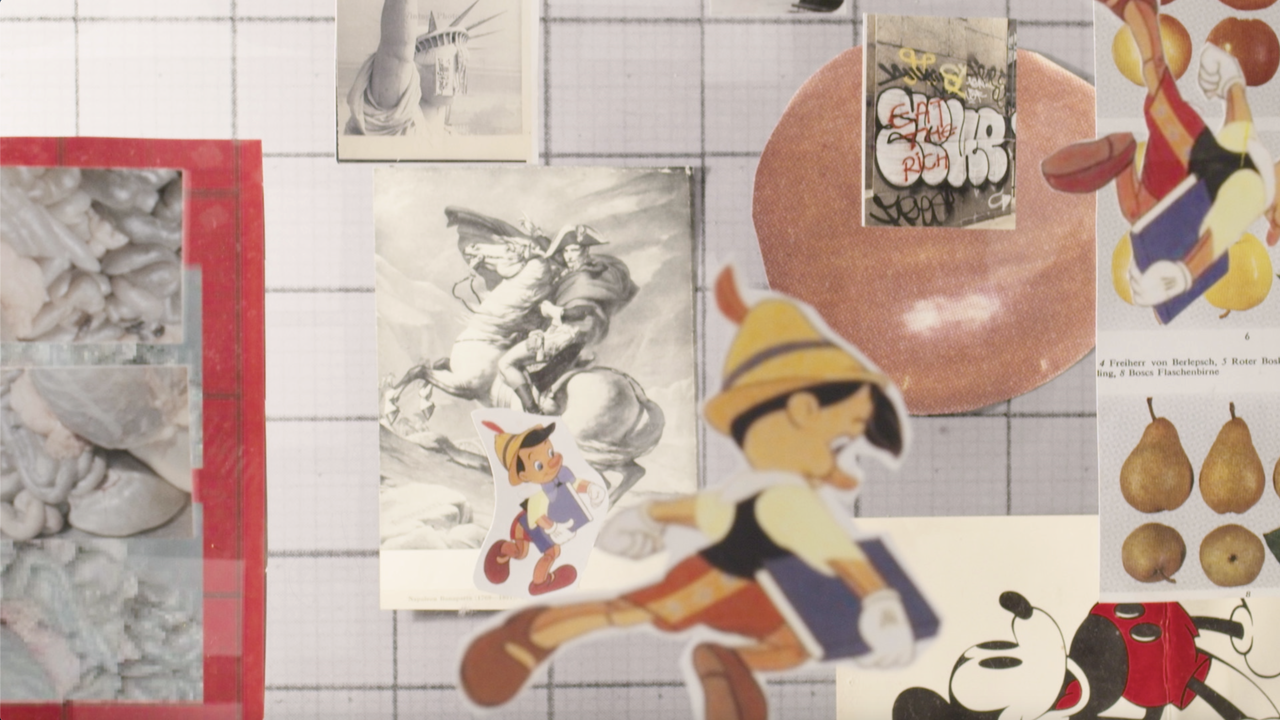 The remaining monitors rest at the leftmost edge of the gallery and showcase a trio of swimmers, each with their own blue diving cap. These figures appear elsewhere in the exhibition as well, wading down the image-stream on its more central screens, their lissome lined movements breaking with the relatively mechanical pace of the photographs’ journey. The exhibition text identifies this kinetic disjuncture as a sort of glitch wherein the swimmers side-step the ordering mechanisms behind the video’s photographic assembly line. Furthermore, Cwynar suggests that these swimmers may be her own personal avatars. From time to time, their mouths move in tandem with the spoken text and, more generally, their perusal of the images on view mimics that of the artist who eventually assembled them. In turn, even though we might begin to worry about the swimmer’s ability to float above and remain off the grid – especially because of the video’s insistence that surveillance capitalism easily appropriates even its antagonists – “Glass Life” is not all doom and gloom. As Pierre Klossowski has written in regard to the “impulsive force” of human affect and emotion, “if these forces are expressed specifically in accordance with existing economic norms, then they themselves create their own repression, as well as the means of breaking the repression to which they are subjected.” [3] Cwynar’s work speaks directly to this ambiguity, clearly cognizant of the unchecked extraction carried out by contemporary capital but unwilling to accept art-making as a fully depleted activity. If images are now bits and chunks of human capital, they are also, in Cwynar’s work, a manic fascination and spirit-sustaining resource. Maybe, for now, in addition to the artist’s illuminating and diagnostic mapping of the “Glass Life,” that’s all we can really hope for.

Blake Oetting is a writer based in New York and currently a PhD candidate at the Institute of Fine Arts, NYU.