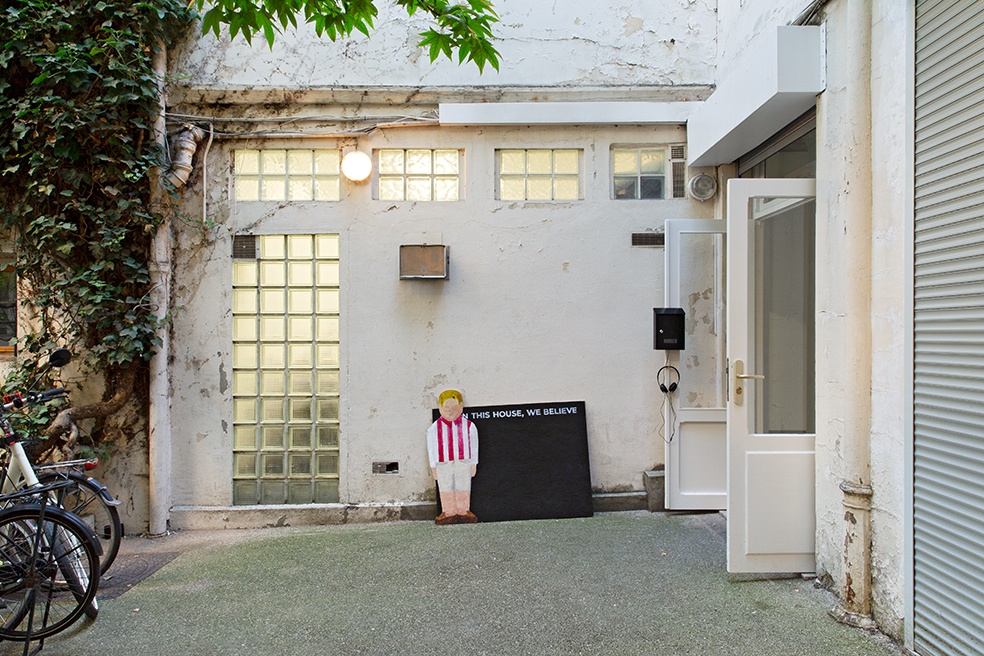 What real social change can political art effect, and can its efficacy even be measured? Artist Erika Landström poses these questions during a visit to Matthew Langan-Peck’s show, “Four Ways, l’amour gagne” at Édouard Montassut, writing that the likely immeasurability of art’s actual social impact leaves it open for exploitation. Landström explores this relationship through Langan-Peck’s work and considers the dissonance between intentions and outcomes.

“Four Ways, l’amour gagne,” on display at Édouard Montassut in Paris this fall, is Matthew Langan-Peck’s second solo show at the gallery. Taken together with his first, almost exactly four years earlier, the exhibitions bookend Trump’s term in office. On a crisp fall day, when the cold, translucent air seems to varnish the colors meeting the eye, I am greeted at the courtyard by a childlike figure with golden hair and a red-striped shirt. First appearing in Langan-Peck’s 2016 show at the gallery – then as a soccer-playing son in a constellation of inflatable sculptures (The Child, The Mother, The Insurgent) – the figure has returned, now flattened into a sign. Four years older, and dressed up for the occasion in khaki shorts and loafers, he stands resolute at the gallery entrance, guarding a single line of text: “IN THIS HOUSE, WE BELIEVE.” For those never exposed to this viral slogan, its language has been lifted by the artist from a political yard sign that first cropped up on a lawn in Wisconsin shortly after the US presidential election of 2016. Below “In This House We Believe:” the property owner, a white middle-class mother of two, had grouped a series of well-known statements in an act of solidarity, and as a list of personal commitments: “Black Lives Matter,” “No Human is Illegal,” “Women’s Rights are Human Rights,” “Science is Real,” “Love is Love,” and “Kindness is Everything.” A few days later, a photo of the sign had been shared over 30,000 times on a Facebook page for Clinton supporters. Craftier renditions followed, and before long, a printed version known as the “Kindness is Everything” sign became an Amazon bestseller. The sign outside the gallery, however, is blank beyond “BELIEVE.”

What does it mean to invoke this viral sign within an exhibition context? Pulled from disparate and sometimes antagonistic milieus, the statements on the sign – now erased – have been severed from their original contexts, bundled up and distributed in a manner similar to the dissemination of bullet-point politics on social media. Placatory phrases such as “Kindness is Everything” seem particularly offensive in their vagueness, which, not unlike sound bites during political campaigns, cater to everyone yet no one in particular. While the act of erasure probes the intentionality and accountability of those displaying the “Kindness is Everything” sign outside their homes, in placing a hijacked version of the sign outside the gallery, Langan-Peck seems to direct his disbelief toward “political art,” and perhaps with reason. When socially engaged practices come to serve primarily as vehicles for individual visibility, “activism” appears suspiciously adaptive to market forces. Besides, how could we measure an artwork’s social impact? Certainly not in terms of market value. Even if this immeasurability might offer an escape from the types of instrumentalization where habitually imbued social critique increases an artwork’s market value or where social practices are appropriated and commodified, one could just as easily make the argument that it is precisely immeasurability, or “productive ambiguity,” that is exploited when an artwork is designed for maximum visibility and circulation. In modelling the exhibition’s prefacing work after the “Kindness is Everything” sign but leaving it blank and open for inscription by forces beyond its maker, Langan-Peck seems to suggest that it is precisely the convenient naivete of “political art” that prevents it from accomplishing actual social change. More often, artistic practices play a systemically reproductive role in maintaining the social status quo.

Can the spoken word be trusted over the written, I wonder as I notice a pair of headphones hanging from a mailbox mounted to the gallery’s main door. From them, the voice of an anonymous entrepreneur intonates an account of his path to financial success in what imitates a 20-minute-long motivational podcast. Starting out as a Craigslist hustler, buying and selling used furniture out of his van, it was fatherhood, he interjects, that “really lit a fire under my ass.” After he and his ex-partner are disqualified from adoption due to low income, he suddenly finds himself a single parent when he agrees to adopt the son of a friend who can’t provide for his child. With an unexpected inheritance from his grandmother, he invests in a self-driving car and a number of “Okio 3s” – the first bots on two legs that can “learn from anyone” – and crosses over to the moving business. Here the audio piece starts to resemble a TED Talk from the near future, and our protagonist’s emerging enterprise becomes increasingly dubious as the task of the bots has shifted from lifting couches to carrying out evictions. The voice of the narrator dampens a little when mentioning his adopted son, who has come to resent the small Long Island town where he was raised and the private schools where he felt “out of place.” “As soon as the public DNA data was released in ’39,” the voice continues vaguely, “he found out some stuff, about his folks and my folks,” and how the narrator’s grandmother – “a real, proper, stiff Southern lady” – made her money. 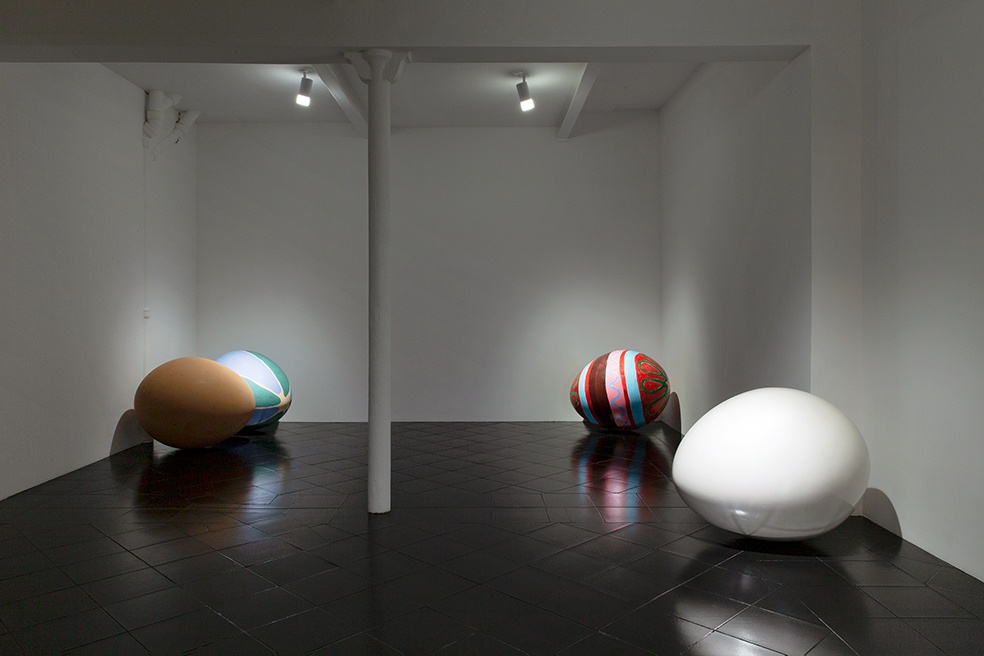 From the fragmented yet indicative information provided by the narrator, often through casual asides such as, “every entrepreneur has something to fall back on,” there is more to be gleaned from this time-based work than the debunked myth of the self-made man. The title of the audio piece, Red/Green Problem (2018–2020), presumably a reference to the hereditary condition of color blindness, serves to aid in shifting the listener’s attention to the unspoken and the unseen. Intertwined in the account, if subtly, is a one-sided report on domestic transracial adoption from the perspective of the white adoptive father who raises his son with a “color-blind approach.” Stemming from the Civil Rights era’s ideas of equality and non-discrimination, and still widely practiced among transracial adoptive families in the US (of which the majority of the adoptive parents are white), this approach has been heavily criticized, often by the adoptees themselves. The main critique has been that color blindness represents white people’s assertion that they are living in a society where racial privilege no longer exists, whereas their behavior supports racialized structures and practices, which ultimately expresses a racist interest in maintaining the racial status quo. The sociologist Eduardo Bonilla-Silva has suggested four frames of what he calls color-blind racism, and of which the “color-blind approach” is but one articulation: abstract liberalism, naturalization, cultural racism, and minimization of racism. Abstract liberalism constitutes the foundation of the four, and involves using ideas associated with political liberalism (such as “equal opportunity” over social policy) and economic liberalism (choice, individualism) in an abstract manner to account for racial inequality while simultaneously opposing policies that would directly address these inequalities. [1] In the audio piece, Langan-Peck localizes these frames within the home, the family unit, and in parental governance, which in turn mirrors the nation-state and federal governance. With the intervention of the yard sign, the childlike figure, and the mailbox mounted to the gallery door, the artist has transformed the gallery and its courtyard into the exterior of a North American home. Perceived through the framework of abstract liberalism, it would appear “reasonable” and even “moral” for its inhabitants to place a “Kindness is Everything” sign on their lawn while also opposing affirmative action, the defunding of the police, and the abolition of the prison industry.

To my surprise, the interior of this “home” has the stillness of a laboratory. In the medium-sized gallery, punctuated by spotlights and narrow pillars, I encounter four oversized eggs resting on the floor. Two of them are painted in colorful patterns drawn from a holiday craft blog, the others in the hues of chicken eggs – white and brown with “freckles.” They seem to mimic beings in becoming, staging a cross-section of the timeline of biological procreation and cultural reproduction through the passing down of craft and tradition. As the only works on display in the gallery, they appear remarkably self-sufficient in their peculiar form of anthropomorphism, tracing the egg as a proverbial illustration of the human mind and its timeless dilemmas. Surely this illusion of interiority and idle movement, concealed from the eye and the camera, is precisely what makes these vitalist sculptures photogenic. Put more crudely, it is the subject-ness of these works that makes their performance as carriers for variable image material – and the signature of the artist – so successful. Does such a mode of production and distribution not resemble those criticized by the artist in the hijacking of the viral yard sign? If so, does this cumbersome contradiction, if somewhat comically staged, point to ambivalence or “productive ambiguity?” The sculptures on the floor seem to embody the first words in an incomplete and unspoken sentence – a pledge about to be made or broken.

Questions left unanswered charge the dimly lit exhibition with cinematic suspense – and a certain existential dread. I return to the audio piece at the main door for guidance. Nearing the end of the track, the narrator in Red/Green Problem discloses his current position as a sought-after consultant in the field of deep learning, hired for his exceptional talent in “disciplining” bots. He admits to having no advice when it comes to raising a child. “Don’t let your kids get too smart. It will come back to bite you in the ass,” he chuckles between coughs.

Erika Landström is an artist based in New York and Berlin.