A member of the Situationist International (SI), Jacqueline de Jong has more recently garnered international attention in her own right. Her latest exhibition at Treize in Paris included work across media as well as ample archival material, offering a crucial synthesis of de Jong’s artistic practice, her work on “The Situationist Times,” and her relationship to the SI. Curator and critic Estelle Nabeyrat visited the show and considers here its relevance to the current political moment.

Born in 1939, Jacqueline de Jong is a Dutch artist who divides her life today between Amsterdam and her country house in the French region of Bourbonnais. Although she lived in Paris from 1961 to 1971, de Jong’s work has only rarely been exhibited in France since the 1970s. But slowly, after a timid 2013 return in a show dedicated to Guy Debord at the Bibliothèque nationale de France, [1] there has been a clear resurgence of interest in de Jong’s work.

Though de Jong is mostly known for her paintings, which formally range from abstract expressionism to new figuration to pop art, de Jong’s first retrospective in France, at Les Abattoirs in Toulouse (2018), also examined her as an active member of the Situationist International (SI) and later as editor of The Situationist Times.

In 2019, a major retrospective of de Jong’s work, entitled “Pinball Wizard,” was held at the Stedelijk Museum in Amsterdam. Its title referred to the pinball machine, the subject of the last (though never published) issue of The Situationist Times, and archival materials from this issue were included in the retrospective. The title choice suggested an interesting flashback on de Jong’s professional career, which she began in 1958 as an assistant to the Stedelijk’s director Willem Sandberg before she settled in Paris two years later. While working at the Stedelijk, de Jong first met Guy Debord – when Sandberg invited the SI to participate in an exhibition that, ultimately, was never realized. It was after this encounter that Debord entrusted de Jong with the SI’s Dutch section in 1960. In 1961, in a SI central committee meeting in Brussels, de Jong proposed the publication of a magazine in English called The Situationist Times.

The Situationist Times ran from 1962 to 1967, coinciding with de Jong’s Parisian life, and the publication’s archive was presented in Paris for the first time earlier this year, at the independent venue Treize. The exhibition, “Same Players Shoot Again,” also displayed a selection of original artworks by the artist alongside a series of documents from the Situationist period. Both segments are key to understanding de Jong’s practice and commitment after she left her position at the Stedelijk to dedicate her life to her artistic career. Cocurated by Gallien Déjean, Juliette Pollet, and Fanny Schulmann, as well as Emmanuel Guy, who worked on the aforementioned Guy Debord exhibition, the show included a few works from de Jong’s painting series Chroniques d'Amsterdam (1971) – made after she left Paris – and the series Pullroom (1977), in which she again depicted games. The show thus emphasized different systems of expression that de Jong developed during her time in Paris.

One vitrine placed along the wall at Treize presented published material such as a copy of the journal Internationale situationniste from 1960 and a 1961 journal from the German group SPUR, among others. Those two publications introduced the process of distinction and opposition that de Jong was going through at the time. 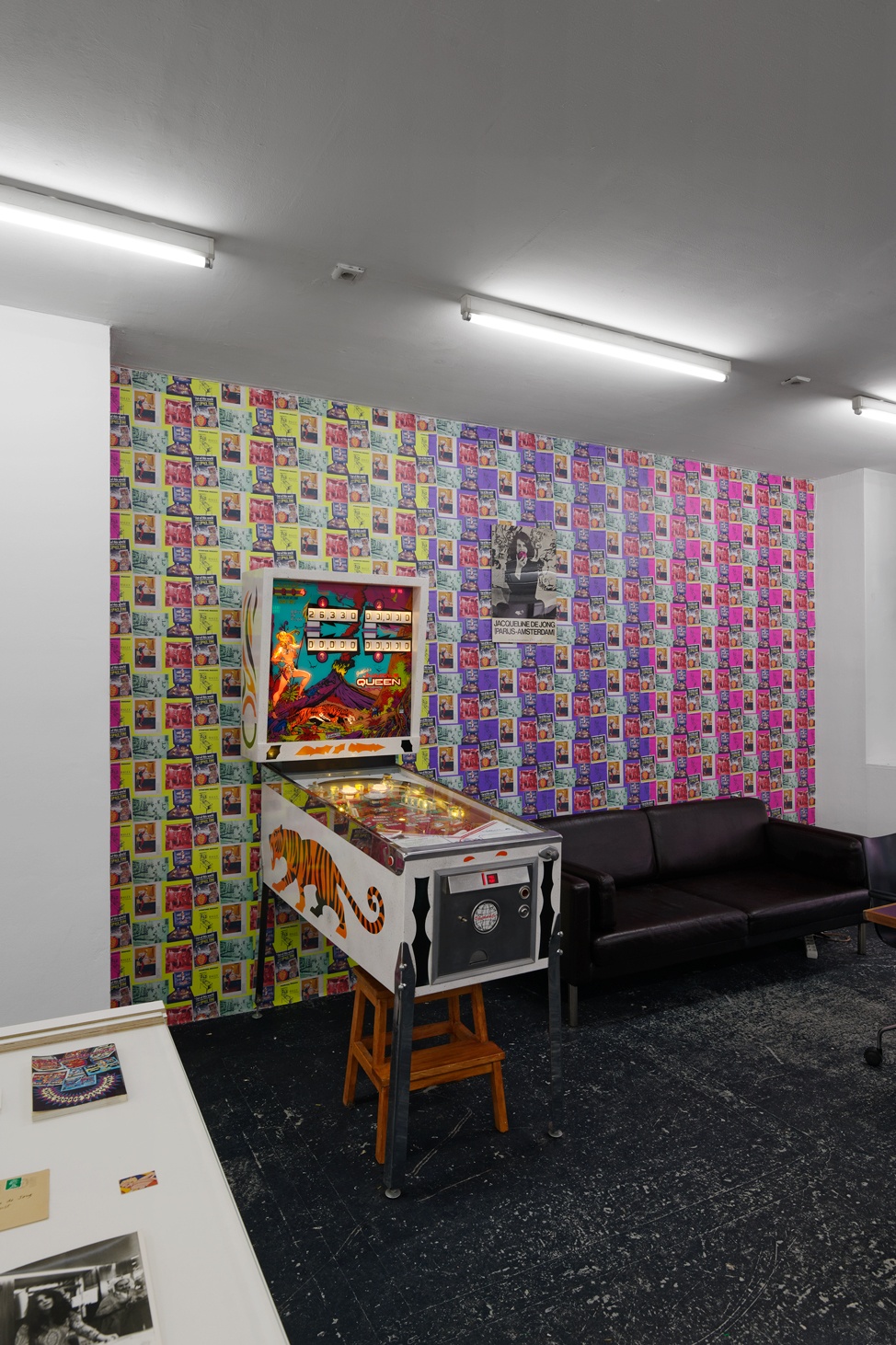 SPUR’s relationship to the SI would prove decisive to de Jong’s own membership. The group joined the SI in 1959, but after a series of apparently irreconcilable ideological differences and confrontations, the SI excluded SPUR in 1962. The SI was taking a clear stance to distance itself from art practices that no longer seemed to fit the SI’s ideals. De Jong, having supported SPUR, was also kicked out of the SI in 1962. In reaction, she created The Situationist Times, a magazine project she conceived at the crossroads of the journal Spur, the anarchist review i10, and the Internationale situationniste.

De Jong established the publication with money earned through the sale of her works and those of her then-companion, Danish painter Asger Jorn, who was a founding member of the SI. For de Jong, politics and art were conceptually and structurally bound. Treize’s exhibition should thus be understood to offer a crucial synthesis of de Jong’s work on The Situationist Times, her artistic career, and her various commitments to the SI, including her involvement in May 68. In combination with other artworks and documents, this particular exhibition highlights more specifically the dissident tendency of de Jong’s work toward revolutionary politics and her taste for art and experimentation, which prompted her to realize The Situationist Times as a countercultural object.

The Treize show’s centerpiece is a Situationist Times archive compiled by the Norwegian researcher Ellef Prestsæter and published, in collaboration with de Jong, as a book by Torpedo Press in 2019. A digital interface produced for the occasion of the book release by the publisher and the Institute for Computational Vandalism allows visitors to browse all issues of The Situationist Times. This material was the subject of a series of various exhibitions at the Malmö Konsthall in Sweden, Museum Jorn in Silkeborg, Denmark, and the Stedelijk before being displayed at Treize.

The archive allows a better historical and formal understanding of the publication. De Jong published the journal with the help of the pataphysician, editor, and friend Noël Arnaud with whom she designed and published the first two issues. Compiling and organizing texts, collages, drawings, songs, press clippings, and mathematical demonstrations is at the core of The Situationist Times’s formal consistency. Collecting a series of encyclopedic images from the Bibliothèque nationale in Paris, where she could photograph all the iconographic material she needed at no cost, de Jong published six issues, each with a print run of about 2,000, and distributed them for free. If the first issues are to be understood as a manifestation of self-affirmation and opposition to the SI which de Jong at this point deemed “authoritarian," [2] the magazine’s editorial slant was sustained by using Situationist hijacking tactics. The Situationist Times was thought of as a détournement (literally diversion, but signifying a strategy of creative deformation), as a printed version of Debord’s theory of the dérive. 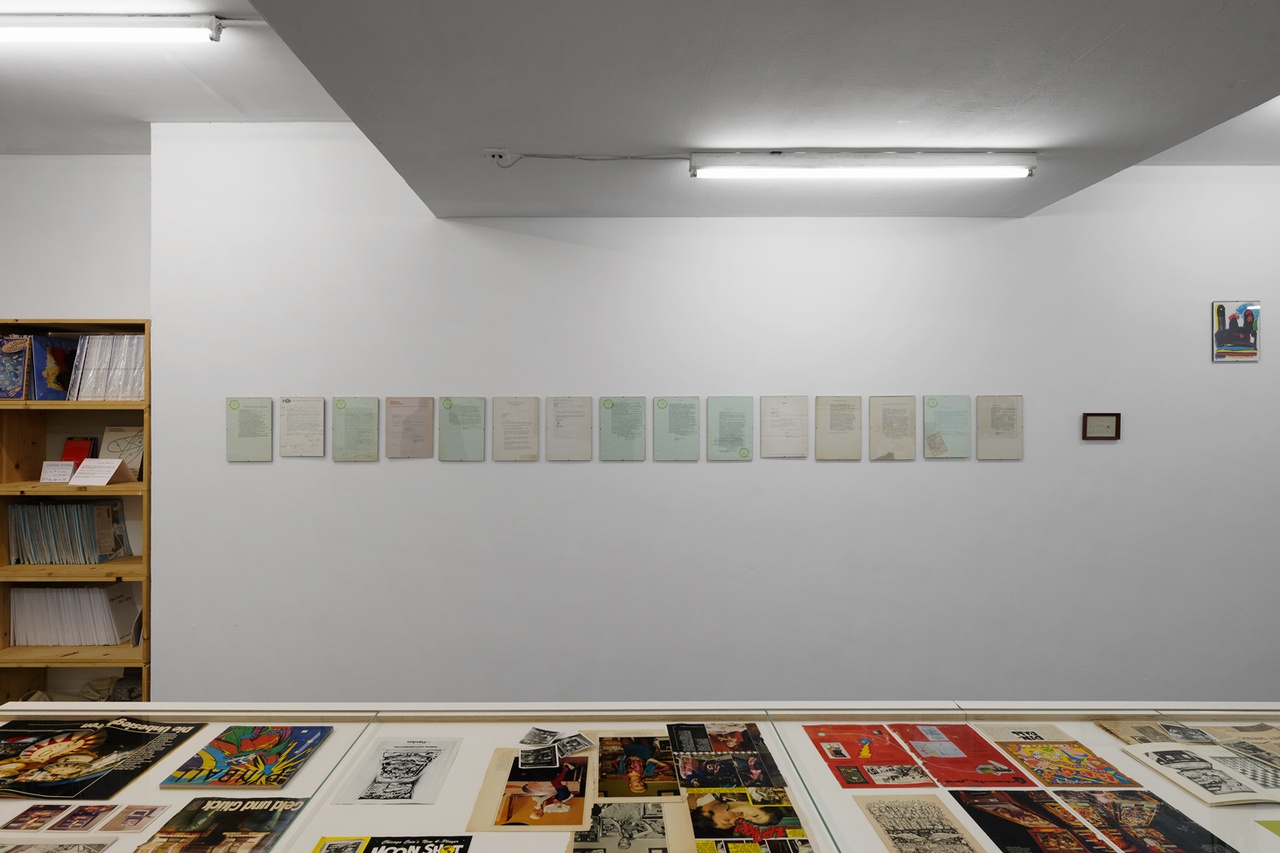 In 1970, de Jong set out to publish the seventh issue, which, for lack of funds, never came to completion. This unrealized seventh issue remained in an archival state and spelled the end of The Situationist Times. Only in 2015 did de Jong remember the existence of a box in which she had kept all the documents for the issue; its contents form the heart of the exhibition at Treize. The issue was devoted to the pinball machine, illustrated by the presence of one in the gallery, available for visitors to use at no charge. For de Jong, the game’s ball represented another drift, the pinball machine thus another topological exploration for the journal.

The documents were displayed at Treize under a large glass table: newspaper clippings, correspondences, notes, and lists of pinball game results, as well as personal photos taken of pinball players in bars. With this seventh issue, de Jong wanted to return to an editorial principle she had developed in issues three, four, and five, which were dedicated to the knot, the labyrinth, and the ring, respectively, by assembling an exhaustive inventory on a particular subject. But what becomes especially clear at Treize through the combination of other collected material is that, from the texts of French writer Roger Caillois to the song “Pinball Wizard” by The Who, the “history of the pinball machine is a reflection of the schizophrenia specific to capitalist societies” [3] and was fascinating for many artists and intellectuals of the time.

In this perspective, the seventh unpublished issue resonates in a very particular way with the current situation of general closures that have deprived people from all spaces of emancipation (cultural institutions, libraries, public demonstrations, etc.) during the COVID-19 pandemic. In fact, The Situationist Times was put forward as a contribution to a culture of sharing, conceived as a transformative material of the commons, in which appropriation seemed contingent in its conception.

Thus, the context of the exhibition is a form of extension of the independent spirit and the political awareness of de Jong’s work. Accompanied by a long interview led by cocurator Gallien Déjean, [4] at Treize, the French iteration of the exhibition plunges visitors into a Paris of the past, to an eminently politicized era reminiscent of recent mobilizations (Gilets jaunes (Yellow Vests), Art en grève (Art on Strike), Black Lives Matter). Here again, The Situationist Times is not only a testimony of its time but it also speaks to us today: like a pinball machine, it invites us to play in the present and “to indulge in the sheer joy of making connections, all the while unraveling historical chronologies, cultural hierarchies, and behavioral patterns.” [5]

Estelle Nabeyrat is an independent curator and art critic currently working on a publication about artists in exile (Latin America & the Caribbean) in the Cnap, French National Collection. She is a co-organizer of ForTune, a program on art workers conditions (DUUU* webradio, Paris), with artist Eva Barto.