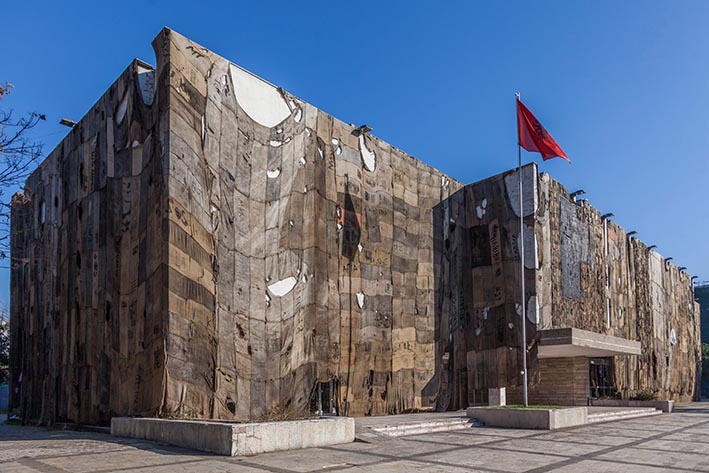 Curation has always involved straddling the line between carefully planned decision-making and pragmatism, and the ability to react to a changing situation is an increasingly important skill in an era where the “outside” can quickly come crashing in on a project, artist, or institution. Sonja Lau recently visited an exhibition at Albania’s National Gallery of Arts that shows what it really means in curatorial terms to “think on one’s feet.”

To review the exhibition “Tirana Patience” is peculiar due to its specific conditions of (in)accessibility. Or maybe, rather, its temporalities? Curated by Nataša Ilić and Adam Szymczyk, the exhibition was scheduled to open on November 27, 2019 at the National Gallery of Arts in the Albanian capital of Tirana. During the night of November 26, however, an earthquake with a magnitude of 6.4 hit that country, killing several dozen citizens and leaving the National Gallery damaged to an unknown extent, making it unsafe for visitors to enter. The gallery remained closed on November 27 but nonetheless displayed Ibrahim Mahama’s outdoor commission The Palace of Dreams, which covered the entire facade of the museum with a stitched jute curtain. For the days and weeks to come, The Palace of Dreams appeared to operate first and foremost as a protective veil, providing a period of convalescence for the damaged building and the artworks held inside. A day before its opening, “Tirana Patience” thus became an exhibition sealed off from view, enclosing the entire installation and leaving it akin to a neatly laid dinner table at which nobody ever arrives.

On December 22, the building was declared safe enough to open its doors, allowing for the eventual crossing of the “curtain.” Out of respect for the earthquake’s victims, the exhibition opening refrained from any further festivities. Cognizant of the enhanced level of meaningfulness this situation brought with it, the museum also refrained from covering up the cracks in its interior walls. The Palace of Dreams could thus reclaim its status as an artwork within an exhibition, shaking off its previous connotations and its interim protective function. Inside the building, the artworks were found intact. But something had happened. To write about “Tirana Patience,” I felt, would be to write about at least two exhibitions, one in the past tense and one in the present, as if the incident had sliced the initial curatorial proposal in two. Moreover, it became increasingly uncertain if the gallery had ever really been “sealed off.” Didn’t it continue to operate even while closed, pouring out from inside onto the streets (and vice versa) in a most unusual manifestation of a “museum without walls”? Clearly, the curatorial proposal had been tested here in an unprecedented way. Peering at the gallery from the outside, one thing already became clear about the concept of “patience”: it in no way means merely waiting for things to settle. Rather, it indicates an ability to allow for the unexpected to seep in.

The incident of the earthquake that delayed the opening came as an unexpected or even uncanny accomplice to the initial proposal. “What if,” the curators’ statement asked, “instead of granting its visitors the opportunity to see and appreciate, an exhibition effectively blocks access to the works of display?” “In Tirana Patience,” the text continues, “the original movement is that of temporarily holding back, of not exhibiting the works that have been on view, in changing configuration, throughout the last decade.”

A variety of curatorial concerns and observations have imbued this proposition of withdrawal – one of these being, interestingly, Guy Debord’s famous critique of spectacle, permanent stimulation, and overabundant consumer culture. The most tangible of these concerns, however, is most likely the National Gallery’s comprehensive collection of Socialist Realist art, which makes up the largest fraction of its inventory by far. At the same time, as the result of strict artistic regulation, it is also the museum’s most precarious collection, widely treated with suspicion due its ideological origins. To its local audience, it is simultaneously both the most and least well-known collection in the museum’s holdings. After decades of display – combined with academic neglect, not to mention the strategic derision of the Western art canon – one runs the risk of seeing right through the works it contains.

In assembling “Tirana Patience,” Ilić and Szymczyk made a both radical and subtle decision. The crucial thing, they decided, was to generate a setting, or “tool kit,” that could lead to an ongoing process of modification and alteration. For what they called the “first movement of the exhibition,” the curators did not interfere with the display of the collection on the level of selection, focusing instead exclusively on that of visibility. Throughout the space, the historical paintings are covered with sheets of white, semi-transparent cotton, each stitched carefully together from two pieces of cloth. As a result, a thin horizontal seam runs through the covers throughout the exhibition space, consolidating the works by suggesting a shared equilibrium. The artworks’ airy coverings allow for speculation about the content they conceal, while also averting any conclusive inspection. Consequently, the attempt of looking through the covers necessarily coincides with looking at them, at the very object that obstructs the view. 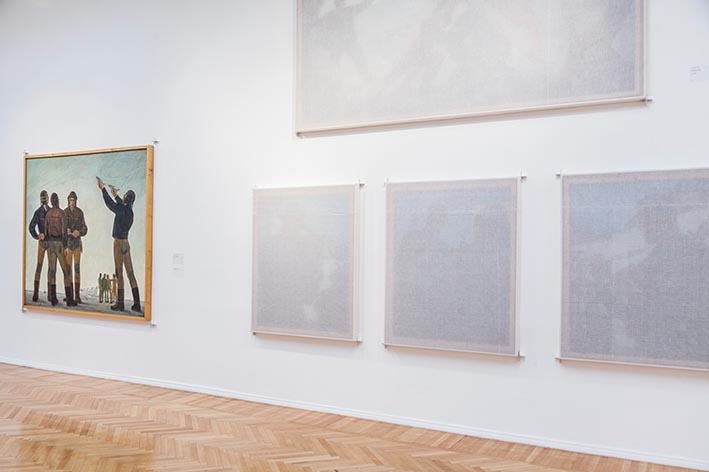 By means of another minimal-invasive gesture, all paintings have been mounted with the support of small metal crosses at their corners. These convey the impression of cutting marks as commonly found within print applications. More importantly though, they transform the procedure of “hanging” artworks into a gesture of “holding” them.

Only a scarce number of paintings remain unveiled. For the most part, they have been chosen by the invited artists, the “second movement of the exhibition,” as a starting point for their own new commissions, as well as by intuitive interest or fascination. The sudden prominence of the paintings within the otherwise covered display unleashes a loose narrative that somehow remains malleable. Potentially, by the simple act of lifting another veil, the given assembly can shift into another constellation, fueled by a process of trial and error. “Tirana Patience” thus subjects itself to change from the moment of its instigation.

With the earthquake on November 26, two things happened: Against the backdrop of the incident, the curators’ proposal took on another, expanded reading. The proposal now appeared temporarily squatted by an uncanny doppelganger that placed the surrounding environment in a state of paralysis, effectively cutting off all connections between the inside and the outside of the gallery. Against the backdrop of the exhibition, however, the earthquake conversely took on a sociopolitical dimension: the level of destruction did not only reflect the quake’s magnitude of 6.4, but also the true extent of politically motivated “facade” projects (be these prestige buildings or housing) built in the country, many of which collapsed under the earthquake like houses made of cards, revealing unsafe housing conditions and precarious living situations. From the night of November 26 on, “patience” once again became a sociopolitical reality, one that paradoxically shook off all divisions between the gallery’s interior and exterior. As already mentioned, “Tirana Patience” was initially conceived as an ongoing project that essentially offers itself up for free use. The first “users” of this tool kit were to be those artists invited to participate in the exhibition. It now appears that the second peer to respond to this offer was the earthquake itself. It might even be the exhibition’s last curatorial comrade, in fact. For some time now, the National Gallery has been slated to undergo a complete refurbishment, with a new architectural design already having been commissioned to that end. The cracked walls and flawed facade of the gallery may come in handy for the investors’ agenda, augmenting their chances of demolishing the entire building instead of considering its partial renewal.

I would argue, however, that “Tirana Patience” is not to be confounded with an exhibition simply confronted with the accident of an earthquake (nor with the investment schemes that now threaten its existence). On the contrary, what makes “Tirana Patience” different from a wide range of contemporary curatorial practices is its deliberate admittance of change from the very outset, a method that might best be described as “curating contingency.” Exhibitions can generate knowledge through the artworks they set into dialogue, arranged according to specific set-ups, gestures, and “rules,” and even more so by deliberately relinquishing the latter. By setting loose a distinct share of the curatorial control of the exhibition from its outset, Tirana Patience didn’t claim to anticipate the incidents that followed, but it did acknowledge the complex social and political strata that surrounded it, and with this lend itself to be affected. The result was a very rare dialogue between the body of the exhibition and its outer social, political (and even ecological) spheres, a dialogue that could not have been scripted by a single hand alone. To “curate contingency,” then, is not to exploit a particular context, but to arrange a situation in such a way that it is allowed to speak for itself. Which, given some patience, it might well do, and most comprehensibly.

Sonja Lau is a Berlin-based curator and cultural producer.