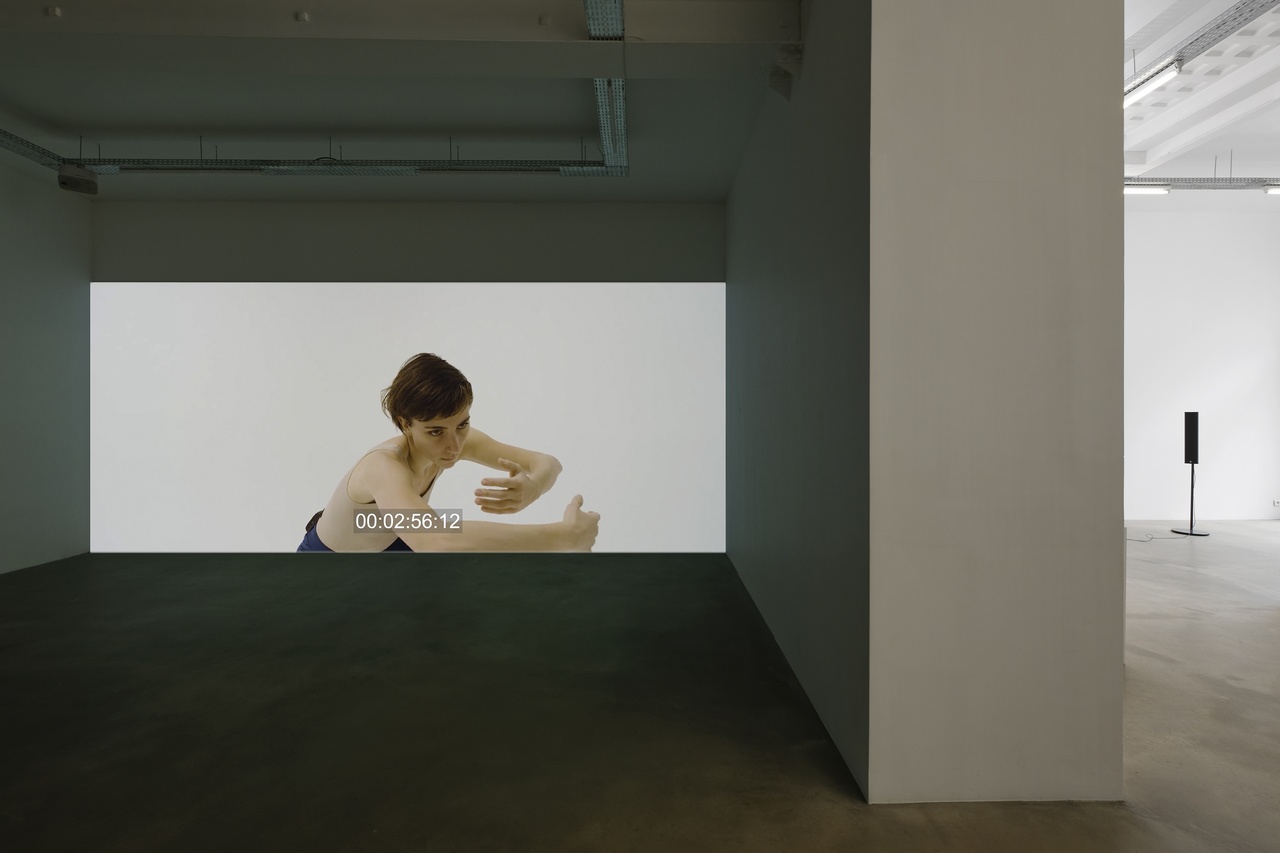 The still life, a genre static and enduring by nature, might be the antithesis of a choreographed performance, yet in her recent show in Paris, Cally Spooner proved otherwise. Exhibiting a performance that unfolded across media – on film, in writing, through speakers, illustrated in drawings – Spooner documented the traces left between moments of stillness and vigor and gave new meaning to “still life,” disbanded from a binary of life and death, stillness and vitality. As writer Jazmina Figueroa describes, in this show, Spooner offered still life as a continuous staging that grows almost artificially abundant.

Cally Spooner’s exhibition “Fifty Billion Hectares of Time” at gb agency was located just off a bustling street in Paris. Upon entering the space, I was met with the stifling and weighted stillness of the show – a stark contrast to the monotonously teeming clamor of pedestrian and car traffic. Over loudspeakers, the sound of disembodied, swift movements faintly played throughout the space: heavy repetitive breathing – inhale and exhale in sequence, yet with no distinct rhythmic pattern.

Suddenly a BEEP tone broke the near quietude, marking a shift in the course of Spooner’s DEAD TIME (Maggie’s solo) (2021). A breathy sonance commenced near a window overlooking the street from which I entered the space, imposing traces of softened respiratory noises over the pedestrian vitality of the street outside. DEAD TIME, a single-take film recorded with a handheld camera, is divvied up into two parts by Spooner and exhibited in different areas in the space: a video projection plays in one darkened room while the corresponding audio plays simultaneously on speakers arranged elsewhere. The film’s soundtrack is recorded by a radio microphone worn by the dancer featured on film, Magdalyn Segale. In addition to the intimate register of sounds made by Segale within the choreographic sequence seen on film, the device picked up and recorded radio frequencies between New York City airwaves and any radio interference transmissions near Minneapolis, where the film was shot. 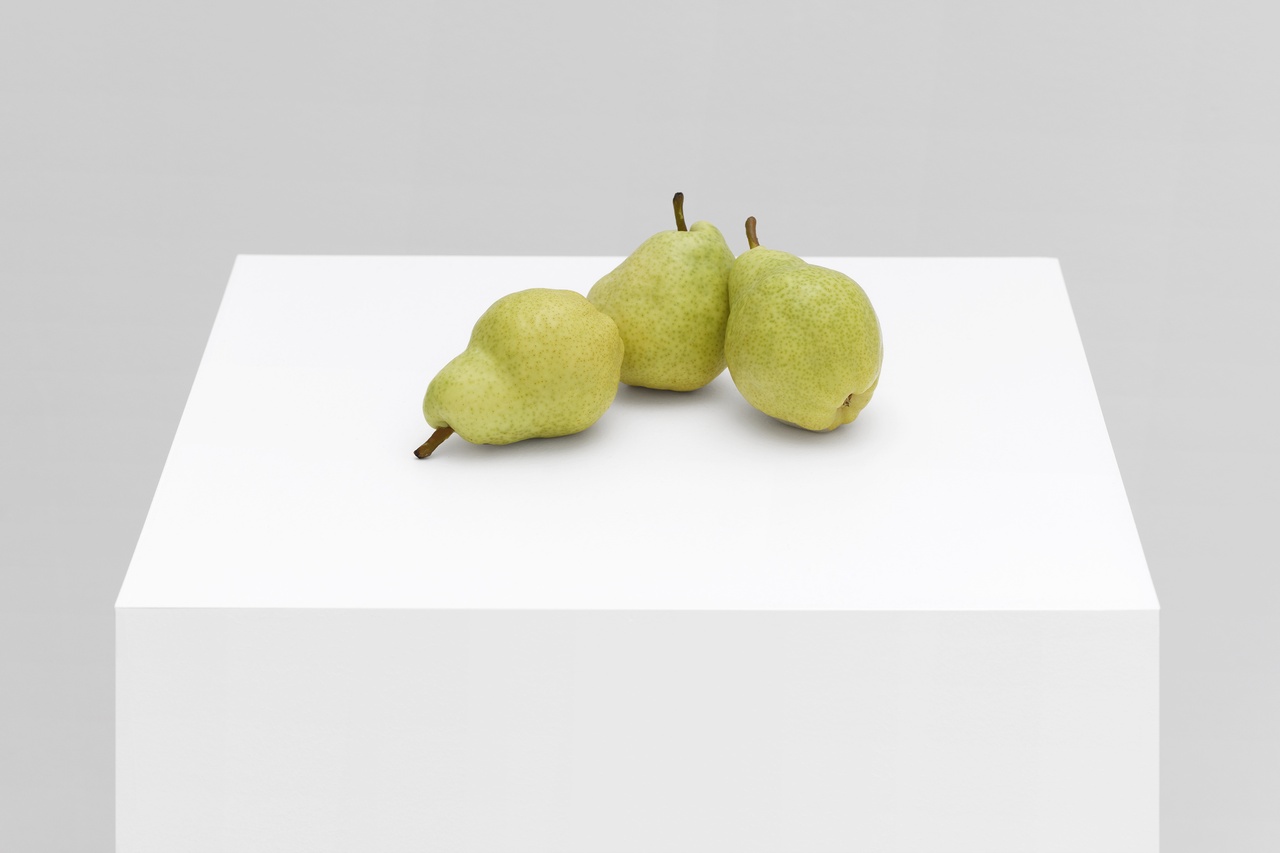 Meanwhile on-screen, Segale performs DEAD TIME, as part of The Paradox of Stillness performance series and exhibition at the Walker Art Center in 2020. Segale moves in brisk, ultra-physical variations – coming in and out of poses, and at times resembling Greek and Roman mythological figures. The repetitive choreographic sequence, a collaboration between Spooner and Segale, shares a semblance with antiquated bronze or marble representations of the human anatomy – evoking the familiar figurative stances and athletic energy of Myron’s Discobolus figure or Agasias of Ephesus’s Borghese Gladiator. Between moments of robust movements, waning states are foregrounded. During this arrest, Segale’s gaze remains concentrated. At times, she postures herself in likeness to the glaring new perishability of a formerly omnipotent figure from classical mythology, one sympathetically portrayed after defeat – for example, in the idle and subdued depiction of a Dying Gaul.

Spooner’s 2018 book On False Tears contains drawings by Spooner reproduced in the present exhibition, the book monographs and documents a collection of her works and their evolutions from 2015 to 2020. In On False Tears, her illustrations appear alongside the literary purview embedded in her work, offering insight into the inner contextual workings of Spooner’s practice. Roos Gortzak’s introductory essay to the book, “Black Hands, Dry Eyes,” references an exchange between Spooner and the Dutch dancer and actor Arnica Elsendoorn about the dichotomous functions of the performers Spooner collaborates with:

Such dual forces are naturally entwined. Nietzsche understands the Apollonian virtues as harmonious, revisionist, having clarity of reason, and abiding by the principle of individuation – a classical Greek philosophical notion of individuality based on structure. By contrast, Dionysian actors symbolize disorder, ecstasy, hindering restraint, owning their passion, and becoming unified (as a whole body) by entropy. Both states are observed in each iteration of DEAD TIME, bearing a climactic tension between poised, considered statues and impulsive breakdowns occurring by way of an instinctual will.

In other segments of DEAD TIME, Segale takes stances that strike a hard contrast to the earlier poses. For example, she poses on one knee with an arm gallantly stretched over her head, her back towards the camera with her head peering over her shoulder, gazing in the direction of the camera. The camera, which moves with Segale throughout the performance, comes in close to document the body in its impermanent stillness; her attentive stare alongside her exhaustive inhalation and exhalation are apparent in the close framings of her abdomen’s rise and fall – and are further developed sonically on the peripheral loudspeakers. In other parts of the film, Segale walks out of the frame completely. 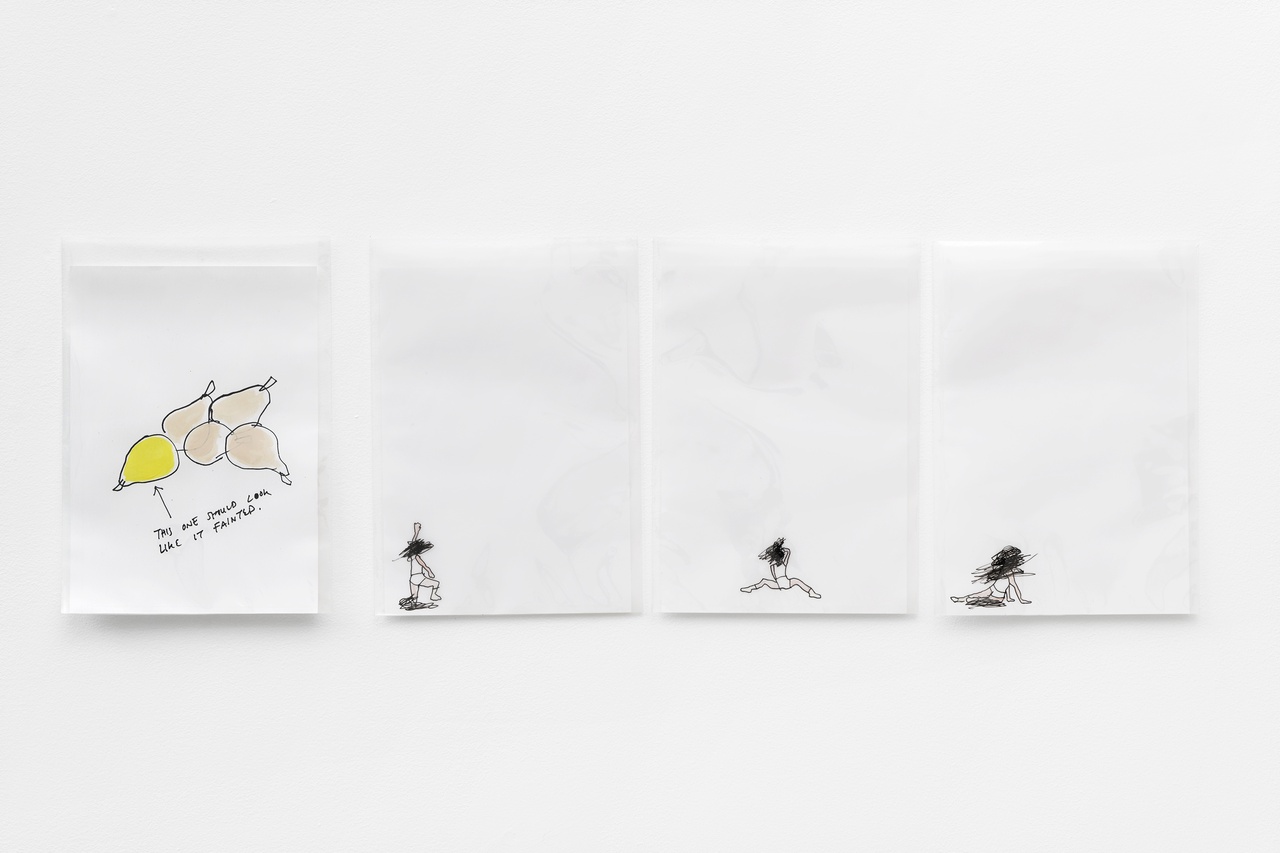 Spooner sketched the contrasting poses in Segale’s filmed performance in several corresponding printed sheets encased in plastic coverings, titled Instructions for Dancing Still Life on a Single Breath I and II and Partridge, hare, fish and mollusc appear intact...with their breath...Snuffed. Out (all 2021). The illustrations indicate the hallmarks of the performance, what Spooner understands as the score for the ongoing work DEAD TIME. Spooner presents language with diagram-like illustrations to chart the development of collaborations with performers through sketches, written notations, literary references, and audio transcriptions. These notes, or scores, extract and highlight elements that give insight into the temporal and technical markers of the work. The instructive “score” also brings forward the structured philosophical underpinnings of Spooner’s work trajectory. Here, words heedfully surface as an archive of Segale’s gestural impetus, freeze-framing moments of significance with their connotations – held against the textural, metaphoric, and descriptive representations like an upright in-between motion, or sometimes, settled in stillness.

Stillness is further explored and captured with an arrangement of fresh pears on top of a plinth and carefully attended to by an assistant. The exhibition’s centerpiece, titled Still Life (2018), recounts a prototype determined by Spooner’s documentation of decaying pears published in On False Tears. Originally, there’s a short diary entry in Spooner’s book that accompanies the picture:

It’s December. A meticulously arranged pile of pears is eluding its own decay. A re-toucher is replacing each fruit every other day, preserving the pile. The season is changing. The pears never fall apart.

Titled Fifty Billion Hectares of Time (2021), the illustration was reproduced as a model or prototype for the pear arrangement Still Life used in this exhibition. Unlike the famed Dutch scenes, which preserved still lifes in oil paint, these pears are destined to decay. Thus, they only remain on the plinth in the period just before this deterioration – regularly replaced by an assistant to restore their artificially consistent freshness. This still life develops as a continuous staging and benevolent production. 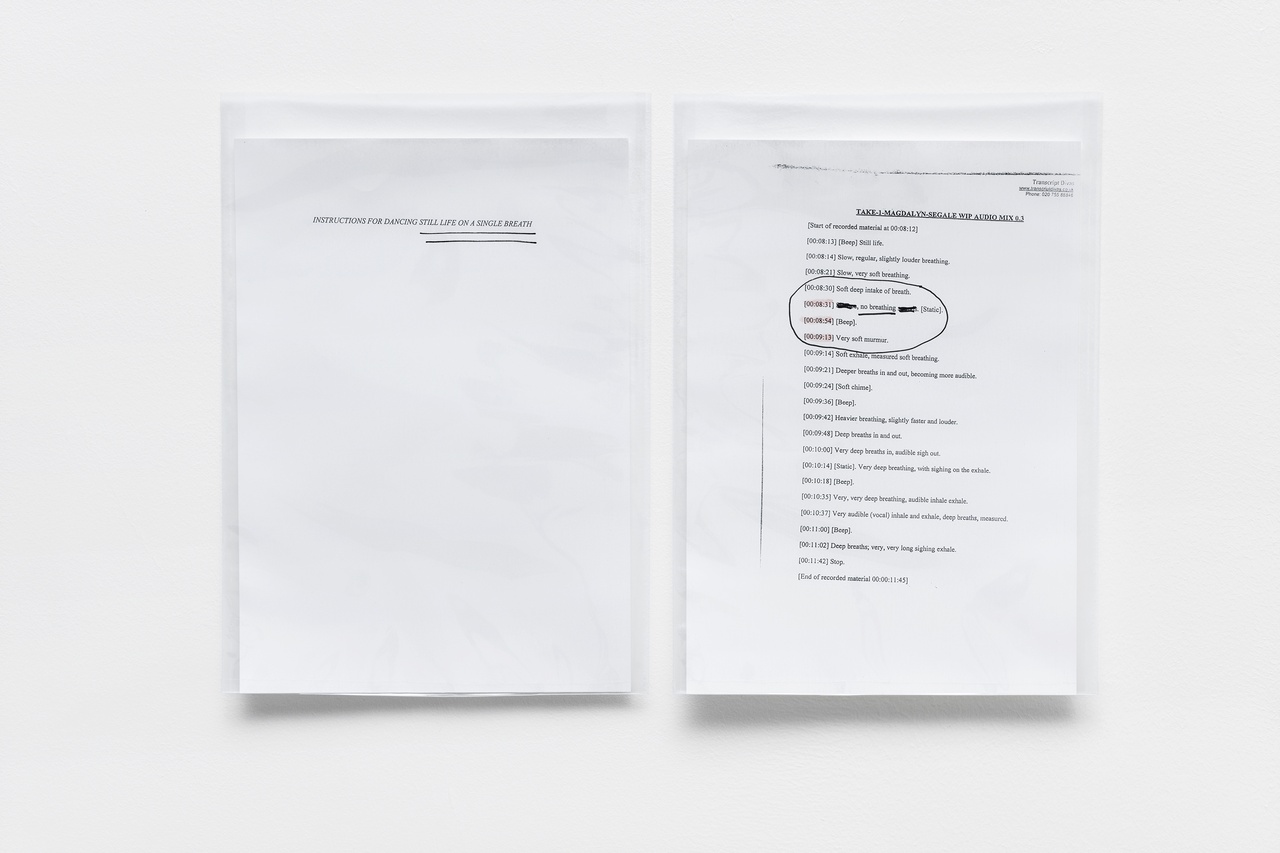 Cally Spooner, “Instructions for Dancing Still Life on a Single Breath I,” 2021

In this show, Spooner “examines a technical and temporal performance climate, in which it is increasingly difficult to tell the difference between what is alive, and what is dead.” It adheres to breathing patterns, feigning preservation, sustained vitality, or the instantaneous stillness captured in words and images. Spooner’s work conveys the dialectic of still life in several parts, explored throughout her practice as written configurations, performance, and documentation. In such thresholds – as traces that occur in between stillness and vigor – time swells as a still life. As a result, what is constituted in her conceptualizations of a still life grows abundant, almost artificially so.

Spooner’s work enacts writing yet emerges as varied successions. As the philosophical groundwork, language is the departure point for DEAD TIME, shown in gestural realizations – revealing the cyclical nature of transference contained and understood through disparate devices. This constant rehearsal and extension act as a provocation into our daily “chrononormativity,” a phrase that appears in Spooner’s book and that was originally coined by the feminist writer Elizabeth Freeman to confront the ways in which individuality unfolds throughout a designated and (hetero-) normative timeline – which exhaustively transpires in our amassed daily maneuverings and social expectations.

In “Fifty Billion Hectares of Time,” we are reminded of the integral components attributed to broadcast, in the scattered sense, and which are compounded as a multitude of expressions or formulations. To understand such subtleties or consequences concerning the functions of each device, one must extend them, pull them into parts, hold them against and within subjective lifespans, contexts, and implications. Spooner’s oeuvre disbands the still life from a binary of life and death or stillness and vitality into a compelling expansion of the single frame, enclosed in time – soon exceeded by what is yet to be unwaveringly released.