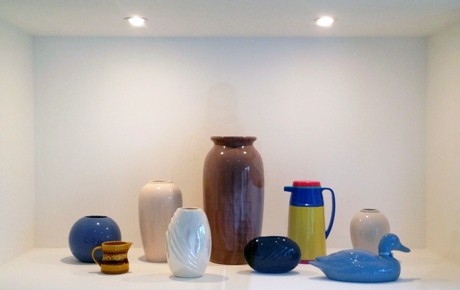 Swept up in the surge of curatorial interest in speculative realism [1], Luis Jacob’s recent exhibition at the Work Gallery, by the near total misapplication of this body of theory to his work, generated a question. Can images be objects? This question is pertinent to approaching how images act as catalysts in contemporary relations – not just as representations of, but rather as actors within events [2]. As part of a larger discussion around the agency of ‘matter,’ In a Material World funnels Jacob’s work into the terms of current engagement: curatorial practice as informed by object oriented ontology, from Documenta 13 to recent shows at the Henry Moore Institute, V2 in Amsterdam and countless venues across Europe.

Starting in 2000, Jacob made several Albums alongside every new major body of work. There is a newly conceived Album, number XI, which dominates the exhibition at Work Gallery. Jacob’s Albums are constructed using physical, paper images within his “life world.” [3] This could mean any printed mass media that cross his path – advertisements, used books, art magazines, newspapers, etc. The title Album, in a series absent of personal effects, connotes that the work has an indirect relation to the artist’s subjectivity. Rather than choosing images based on ‘elective affinities’ which would create image juxtapositions with more explicitly intended meaning, Jacob’s process is meant to “prevent his subjectivity from over determining the work.” [4] Jacob’s process rather serves to locate the artist within a web of printed media that converges spatially: in Toronto to be precise, where the artist is based. This is the where of the plethora of printed images within Album XI: from local newspapers to the used books the artist was able to find. His subject position inevitably seeps out through the kinds of media he had to hand – from the work of Canadian contemporary artists (Jeff Wall) to images that could only have been taken from queer contexts – one image of two skinheads fucking in what looks like an abandoned warehouse could be a Bruce LaBruce still, but could equally be from Butt magazine or one of its ancillaries. Given the history of radical print material in Western queer cultures, as a mode of communication and critically as a method of community building from zines to protest materials, the presence of this type of image locates the artist quite specifically. 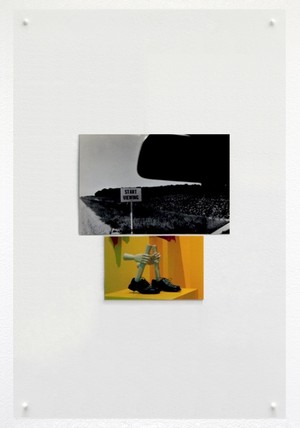 The exhibition’s text insists that this new Album, number XI, is made about our relationship to objects. It further supports its object-oriented theme by installing Jacob’s curious Habitat 2005, a selection of domestic ceramic objects, at the entrance to the gallery. While the curatorial text limits a discussion of object agency in Jacob’s work to Habitat and to the content of the images within Album XI by summarizing that it “reflects on our lives with objects,” it is perhaps more astute to note how the images themselves are interpreted as objects by Jacob’s practice. Jacob insists that the images be physical – they are all extracted from printed matter, and have not been produced from the digital by the artist himself– although it is certain that they existed as digital images at some point in their life spans. This insistence on the physical image produces a “specimen” like quality. When the images are pinned to boards and covered with laminate to create the installation, “they almost have a scrap book feel and especially with the (specific) pins used (they) on the one hand refer to a bulletin board, and on the other allude to those insect…specimens.” [5] Therefore, both through the focus on the image quality itself and through the mode of display, these images are made into objects.

In the work of Hito Steyerl, images are objects because of how they circulate online, and this economy’s relationship to neoliberal culture and policy. [6] They are very “real” as they have active, if not primary roles in the construction of contemporary relations. While Jacob’s insistence on image-objects drawn from within his immediate sphere successfully grounds a rendering of his subjectivity within spatially determined media, and even as the insistence on a locally bound materialism feels worthwhile (in fact this is where the ‘material world’ of the show successfully lies) it cannot account for the role of the digital image and its circulation on the internet within the constitution of contemporary reality. In fact, Albums I through XI, 2000 to 2013, would depict a gradation, from marginal to all consuming, of the centrality of the digital image. Album XI demonstrates this prominence through its gaping absence, from an image of Occupy (which of course was constituted as an international movement online) to images of digital equipment (an image of a control room or surveillance studio features below a black and white image of analogue audio equipment) hinting at the centrality of networked culture and an economy of digital objects all the while insisting on the printed page. The point is, an image taken from print circulation cannot access the primacy of the digital image today, as it is their constitution and movement online that makes them ‘actants.’ If a theme could be pulled from Album XI, it would perhaps be the contrast of analogue and digital ‘objects,’ a juxtaposition across a number of panels, as well as the rarified quality of ‘old technology’: 1980s vacuum cleaners, a curtained film screen, a record player. Album XI is constructed as a plane of images that produces an illusion of equivalence: it cannot access how images have material effect, or speculate as to how objects might, because everything is figured as having uniform influence in the world. 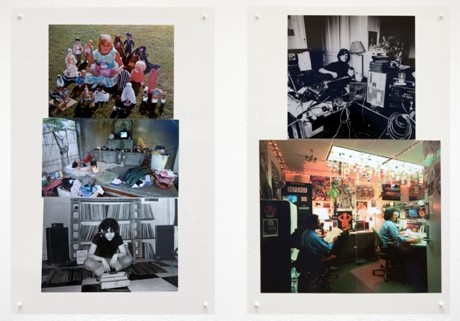 As Jacob’s Albums originate in another art historical period, one more primarily concerned with a politics of representation, its incongruous relationship to its curatorial interpretation betrays two significant effects of the current turn to objects. The first is that such a turn becomes instantly bound to a Modernist discourse tied to an implicit system of value, which is not countered by the artwork. In the case of Album XI, its objectifying impulse removes politically potent imagery (of Occupy for example) from its sphere of critical influence (an online context) as it grooms and inducts it into the art institution. This occurs concurrently with museum efforts to create “3D images” [7] of their collections – both showcase how the objectification of images, rather than extending the freedom of circulation enjoyed by the image to the art object, is in fact part of the evolution of insulating institutional practices in the face of increased access to cultural materials vis à vis the web. While object oriented artistic practice is currently interpreted as “(calling) into question what really is and thus challeng(ing) any realist politics that is merely concerned with an immediate reality of subjects or objects,” [8] and in tandem, questioning the easy separation of subjects and objects, this line of thinking, while certainly concerned with loftier critical objectives, doesn’t reflect the lack of resistance to institutionalization in the recent application of this theory within contemporary art. This connection is significant, as it demonstrates how object oriented theory, in part, manifests. 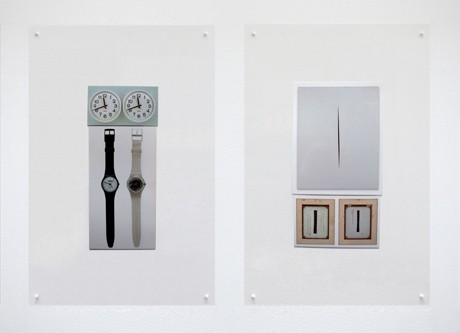 Despite its interpretation as object oriented, Album XI does not operate the complete eradication of separation between subject and object that much object oriented art insists on – rather, as discussed earlier, it holds intact Jacob’s subject position, and its overt queerness, communicating it through material means by relying on the print culture that surrounds him. This satisfyingly attests to the unmarked (normatively raced, gendered, classed and heterosexual) ‘subject’ of object-oriented art. As Jacob’s work is imported into an object oriented framework from an era of artistic practice primarily concerned with ‘reading’ cultural texts, (deconstructing representation as a political move) the artist’s quite present subject position cannot be eradicated, even as the viewer is asked to look for the object. As recent criticism of this turn has attested [9], the move to imbuing objects with agency is far from liberating given the ongoing conditions of capitalist reality particularly for the traditionally ‘abject’, for whom the assertion of identity, and the double bind of its representation, is an ongoing struggle not resolved in the turn to objecthood and its resulting generalization of ‘the subject.’ This is demonstrated viscerally by the presence of Felix Gonzalez-Torres’s Untitled (Perfect Lovers) 1991 in one of Jacob’s image panels. Positioned above a pair of analogue wristwatches, the subject of this piece, (death, AIDS and Gonzalez-Torres’s boyfriend Ross) is effaced within an object oriented contextualization. Its subject is rendered doubly eradicated: first by AIDS, now by the object. The clock is perhaps rendered equal to Ross and to Felix here, but a focus on it as a ‘thing’ circumvents the potency of the piece, dampening it as an act of politicized mourning through attention to the inaccessibility of its ‘thingness’. I certainly am not making the claim that speculative realism is guilty of such violence tout court, but left unchecked, and employed liberally by art’s interpreters and institutions, it is clear that the unraveling of complex articulations of subjectivity engineered by post-modern art practices is what is at stake here. While there is certainly a radical promise in circumventing the always already implicated nature of subjectivity for the inaccessibility of reification [10], it is clear that applied freehandedly, this theoretical application neutralizes prior advancements in the self-representation of an Other subject, without producing an adequate alternative. Similar to a critique of rights, wherein civil rights for marginalized identities are convincingly interpreted as actually reinforcing unequal power relations, yet simultaneously a theory that offers no functional replacement (aside from a utopian vision) speculative realism is right about the limitations of a focus restricted to the subject, but in practice, is unable to produce an alternative that encompasses objects and an actually operational rendering of subjectivity within power relations.

[1] I am using this term very generally to gesture towards the equally broad application of object-oriented theories within recent art discourse. For an overview that specifies distinct strands within this diverse body of theory see: Svenja Bromberg, "The Anti-Political Aesthetics of Objects and Worlds Beyond," Mute (2013). http://www.metamute.org/editorial/articles/anti-political-aesthetics-objects-and-worlds-beyond (accessed November 17, 2013).