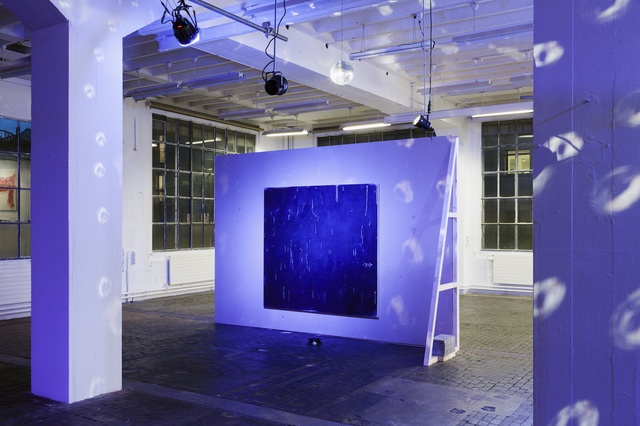 Materialist narratives serve a digestible history, provisioning phenomena with satisfying causal antagonisms. In turn, painting has suffered countless deaths and resurrections: It was adrenaline jolted into decadent megalomaniac vitality, for example, in response to the frenzied ‘80s market, only to collapse again into a relational hangover during the austere ’90s, and so on, or so the story goes.

Humoring this narrative, we might be inclined to consider today in terms of the latter decade. Awaking to the wafting scent of stale cigarette smoke, trembling personal finances, and displaced electrolytes the morning I visited Rochelle Feinstein’s major museum retrospective, “In Anticipation of Women’s History Month,” I felt it at least bore a resemblance.

I had been sleeping on various couches in various cities in the prior weeks. I was living the life of humble vagrant but still managed to drink several hundred francs worth of champagne and wake up with mucus the color of the patented Swiss secret sauce in the glocalized Big Macs of downtown Geneva, my recent staple. The shirt on my back was COMME des GARÇONS but twice removed from its original purchaser, an ex of a friend of mine living in Vienna, whom I had yet to meet. In lieu of basic toiletries, my backpack was filled with rolls of pricey pre-primed linen from Michael Krebber’s studio, twice handed down as well, gifted to me by friends, students of his at the Städelschule in Frankfurt. It is by ad-hoc network constellation, not by simple formality, that I arrived at the Centre D’Art Contemporain for Feinstein’s show, certainly feeling less than the sum of my anecdotal adventures and at the mercy of my carbonated mineral water. 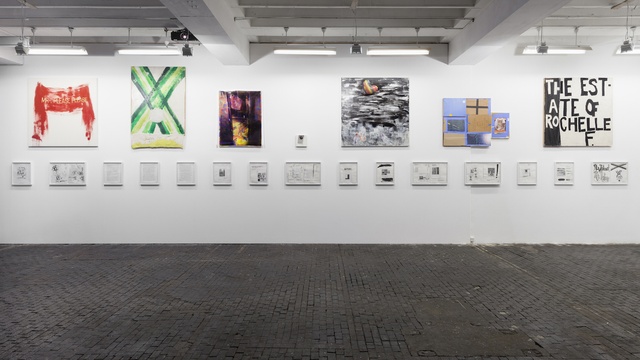 As one of the first tenured female professors of Visual Art at Yale (following her appointment in the Visual Arts department at Bennington College), Feinstein is a stalwart fixture in the academic sphere who can weather the ebb and flow of painting’s cyclical returns. And cohesion, it turns out, is the essence of Feinstein’s subject matter. What comprises her lexicon: accidents, intimate occurrences, doodles during phone conversations, fragments recycled and later consolidated, the nuances of domesticity, mementos from travels abroad, are all preserved in artefact. Like the loose scraps in my pocket, quick notes containing addresses and access codes to apartments, napkins from a fast food restaurant in Dijon, train stubs from the Amsterdam metro and, much to my delight, a few loose aspirin, the sparse materiality of life tells no particular story but encodes our existence in the detailing a life propped up by “betweenness centrality” in a network of occurrences. These are the candid materials that bind us, literally, to the living world, and they become almost completely sublimated into the grandiosity of their receptacle.

But it is form, however, that succumbs to sociability, not the other way around. The retrospective is a rhythmic traversal of Feinstein’s works. Large scale paintings engage with smaller assemblages across various floors. Visual motifs and themes run contiguously throughout variously sterile and divey contexts, defying the need for a docent’s requisition or a disco nap. In Feinstein’s canon, articles that appear as the loose shavings of fable assume new agency over their broader implications. This is not merely Malevich’s anarchic redux or Clement Greenberg in spite of himself, as the iridescent pigments on even her flattest canvases demonstrate. Transmutable moments are sharpened into a cutting refusal of totalization, the raison d’être of modernist mythology. There is an obvious strength in fusion, but even stronger potential in its capacity to circumvent containment from within its grasp. 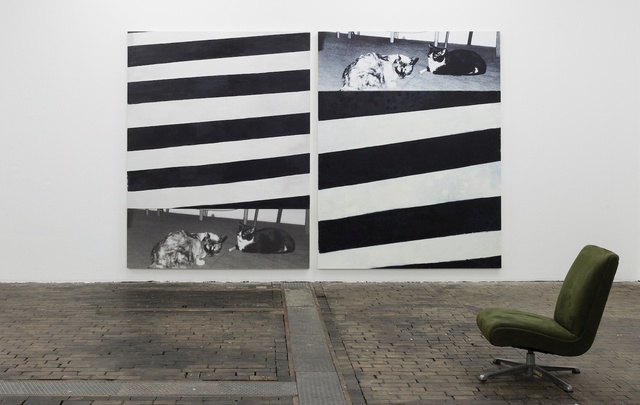 The singular artist, her patented methodology, her hand, her oeuvre, a life primed for retrospection contra the looming anticipation of death, banal idioms whose meanings have worn through semantic satiation, the grand narrative of painting and its anthropomorphic object, legends of pop culture, salient reason itself – all appear to instinct as enframing devices or resistances to subvert.

Most prominently in “The Estate of Rochelle Feinstein,” a pre-posthumous undertaking of the artist’s own legacy, and “I’ve Made A Terrible Mistake,” (2013-) a body of work examining the late Michael Jackson’s public downfall, the divisiveness of pop and personal epics are brought under tender, rather than dismissive, scrutiny. Feinstein identifies these same mythologies as zeitgeists that punctuate the material actuality of life. She accesses them from the points of contact they make with the concrete world, encoded in all of their empirical dressings: the tire tracks of OJ Simpson’s Ford Bronco, a condom that broke during the height of the AIDS crisis, the topology of infidelity rendered by a former lover’s rendezvous, the proximity of Blanket Jackson from a Berlin hotel Balcony in 2003 during his Lion King-esque debut, all reveal themselves as ephemeral avenues for departure.

Order emerges as redeemable in service of the social, through the sensual. The mirrored disco ball comes to mind. After all, what credence would the Cartesian coordinate system have if not for its superimposition on the surface of the earth, or the nearness between two people, or its application in planning future cities? It’s certainly not for love of the box that Instagram users are hooked on the feed (painters are notorious Instagram junkies).

The exhibition itself – as an extensive survey spanning a quarter century’s work (the duration of my own lifespan) – mirrors Feinstein’s self-reflexive vigilance when it comes to form. Where tiring conventions of the retrospective exhibition format are to be found, there, too, lies undue potential. Movable partitions stand in brazen opposition to fittings in the building architecture. Folk-chronologies and alternative ontologies lend themselves to transcendent potential where they might otherwise contribute to the obstinacy of standard exhibition logic. The works, in their totality, begin to reflect a hypertexual character that painting, in light of its weighty history, is seldom acknowledged as possessing. 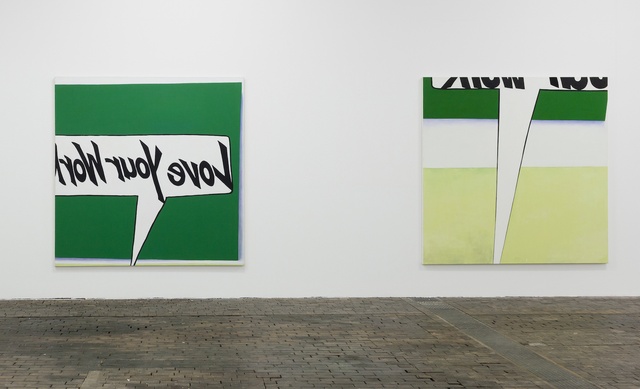 As curator Tenzing Barshee relayed it to me, “Love Your Work” – a phrase that figures large in the painting triptych “Love Vibe,” (1999-2014) – comes from one of life’s three great lies; the other two being, apparently, “The check is in the mail” and “I won’t come in your mouth, I promise.” I smiled. I too, had been subject to such fictions – ones told to me as though clichés could help mitigate reality. In Feinstein’s frame, however, false promises are a joke – and never do they suggest that the truth is always easy to swallow.

Deanna Havas is an artist from New York.