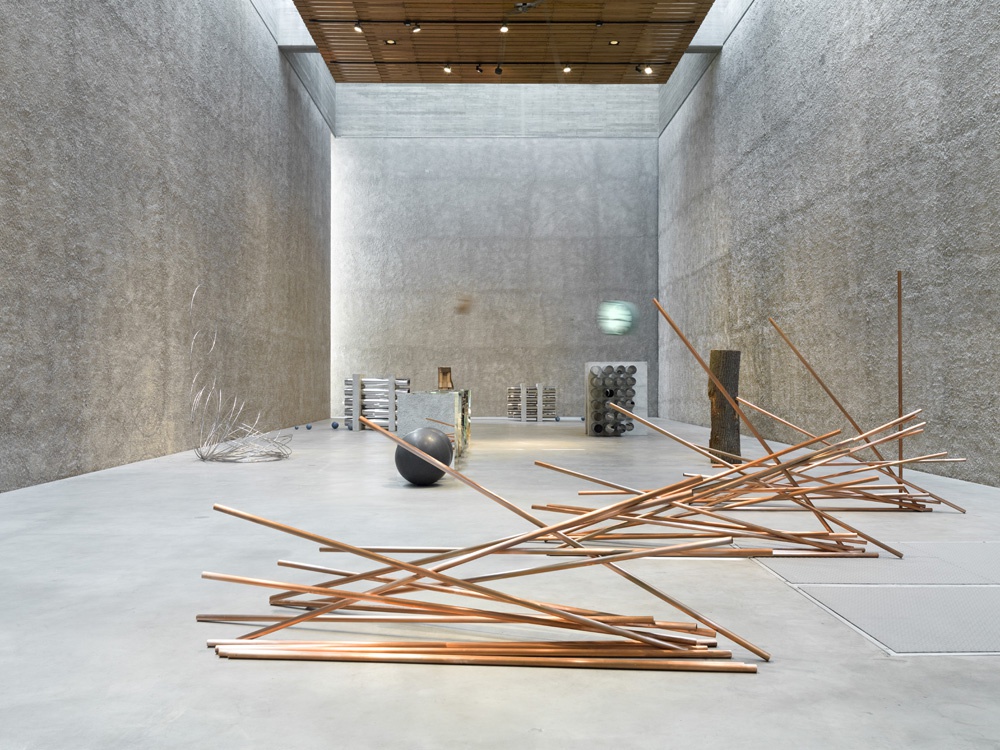 In their song, “History Lesson Part II,” the Minutemen claimed that their band was “scientist rock.” Could one call Alicja Kwade’s work “scientist art”? Kwade’s artistic practice is heavily influenced by the worldview of the natural sciences, and her most recent exhibition in Berlin, “ENTITAS,” certainly invited talk of such a moniker. For Kwade, though, science is not a subject thematized in her works; rather, science provides a particular way of thinking, an awareness, which structures the practice of making. Texte zur Kunst editor-in-chief, Colin Lang, examined the proofs of Kwade’s “science” and what we can learn from their appearance in the present.

In Alicja Kwade’s most recent grouping of works, “ENTITAS,” at König Galerie in Berlin, a powerful vacuum of the aesthetic was opened, and gyrating at its core, a work that proudly announced this void: “Die bewegte Leere des Moments” (2015/2018, awkwardly translated as “The Void of the Moment in Motion”), which spun overhead in the large nave of König’s restored brutalist cathedral. The massive clock and rock is a contextually specific reworking of a 2015 piece of the same name that Kwade installed in the rotunda of the Schirn Kunsthalle in Frankfurt am Main. Here the identical components were in play – rock, clock, chains, motor, and sound component – the last of which echoed throughout the hallowed church, hammering the click of each second over loudspeakers that made the irresistible march of time as concrete and unavoidable as the massive slabs that surround the gallery. This genealogy is not the whole story behind the work, though, as “Die bewegte Leere des Moments” echoes an earlier pendulum construction – “Nach Osten” – that Kwade installed in the then still unrestored caverns of St. Agnes in 2013, a kind of “christening” of König’s new space. Though then, too, the void featured prominently.

This repetition and reworking is a practice the likes of which is best described by what the art historian George Kubler dubbed “prime objects” in his “The Shape of Time” (1962): works that enter a chronology of things and forever alter what comes after them, not in logical transformations, but in leaps out of the established order of form-making that existed previously. Many interpreted Kubler to mean that prime objects were actual objects. Here is Kubler on that point: “In theory, being originally in the maker’s mind, no prime object exists in its pristine state. They all have been altered in actuality, and they suffer the accidents of time, being known only by indirection, like stars vanishing in supernova explosions.” [1] (More on actuality below.) 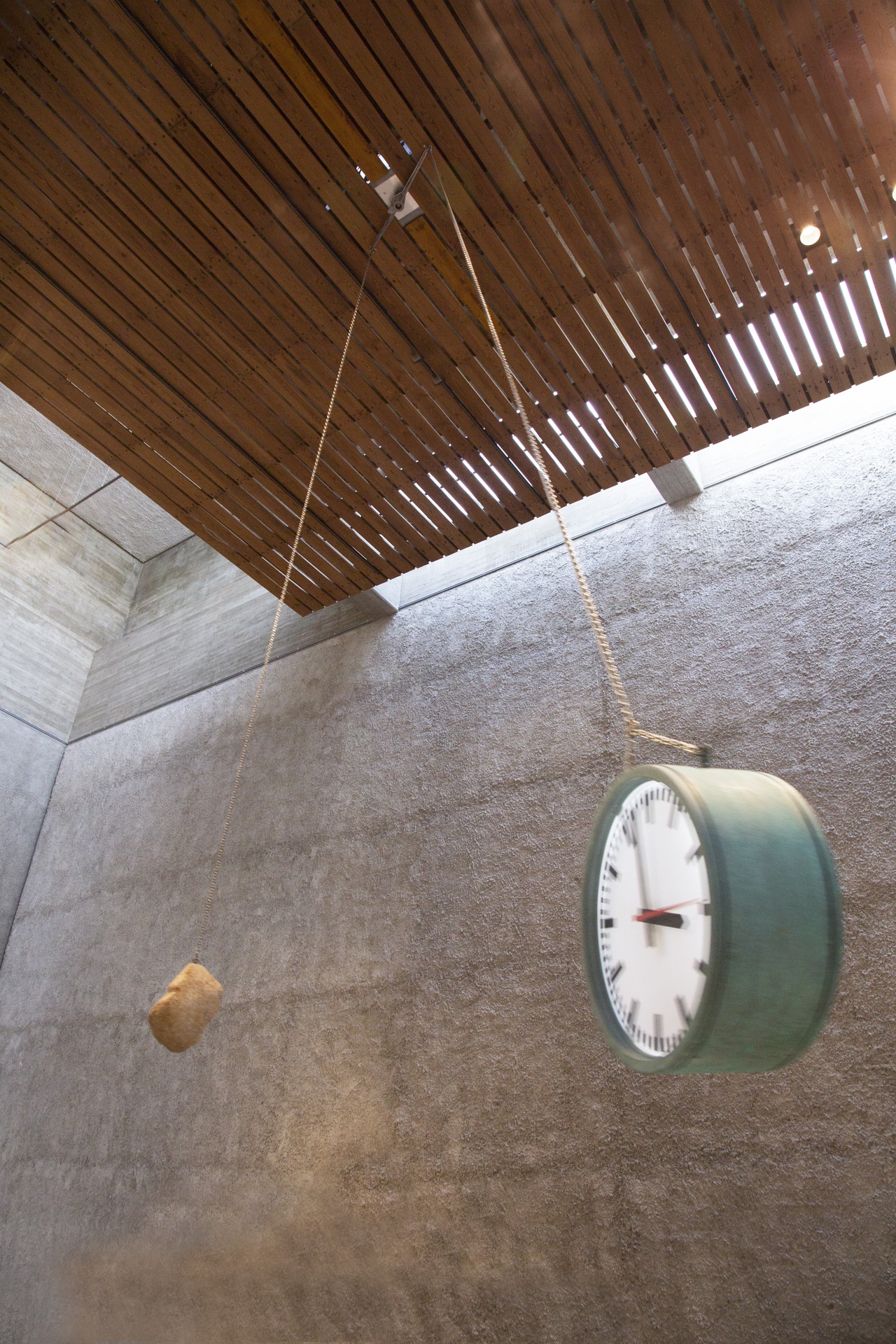 What is the prime object for Kwade, then? In “Trans-Form-Men 8 (Fibonacci)” (2018), we get a clue. Here, a central rock is framed at either end by colored transformations of the basic form (some appear to be 3D-printed), which terminate on one side in a sphere, and a hard-edged copper volume on the other. Mirrors separate the individual forms and make the security of the objects in their reflected image states wholly irresolute – there is no way to visibly hold a single thing still. As with so much in the show, and Kwade’s work more generally, every viewing angle is frustratingly partial, concealing as much as it reveals. It’s not a game so much as a logic – erasing what comes before, enfolding prior values, like the Fibonacci sequence itself, in order to arrive at a subsequent number. Again, the gaps in both the mathematical principle and Kwade’s piece are key: the sequence is laid out in front of us, in perfectly solid terms, but there is never a fully realized manifestation in the present. Every element belongs to a chain, but it is the separation between the individual entities that generates the fun house mirror effect, as seven double-sided reflected glass sheets placed between eight (a Fibonacci number) elements pick up both the objects and the surroundings, including viewers.

Kwade’s ability to hold opposing elements together – light with heavy, solid with hollow, textured with smooth – is the very dialectic that allows the void between these opposites to make its appearance. In “9 Seconds” and “Fall” (both 2018), Kwade takes a single dropped object – in “9 Seconds” a silver ring, “Fall” a copper tube – and captures their descent with a high-powered slow-motion camera, turning the resulting movement through space into materialized, sculptural form. In these two works (“Fall” is a series of three discrete assemblages of hollow copper tubes), the imperceptible flight through space is made over into something tangible, perceptible: sculpture becomes the concretization of an action, of the Earth’s pull, but the realization of it as shiny metal objects is a monument to the impossibility of holding anything still, and a nod to the imperceptible force of gravity – a democratizing power that levels all things in this world. In addition, there are three organ-like tubes in “Multi-Teller (12, 20, & 30) (Orgel)” (all 2018), jutting out of concrete grids, which appear to have shot out miniature blue planets onto the gallery floor. Each cylinder is so perfectly polished that the reflections inside last forever, bouncing back and forth with a levity of perception that belies the material weight of their construction. 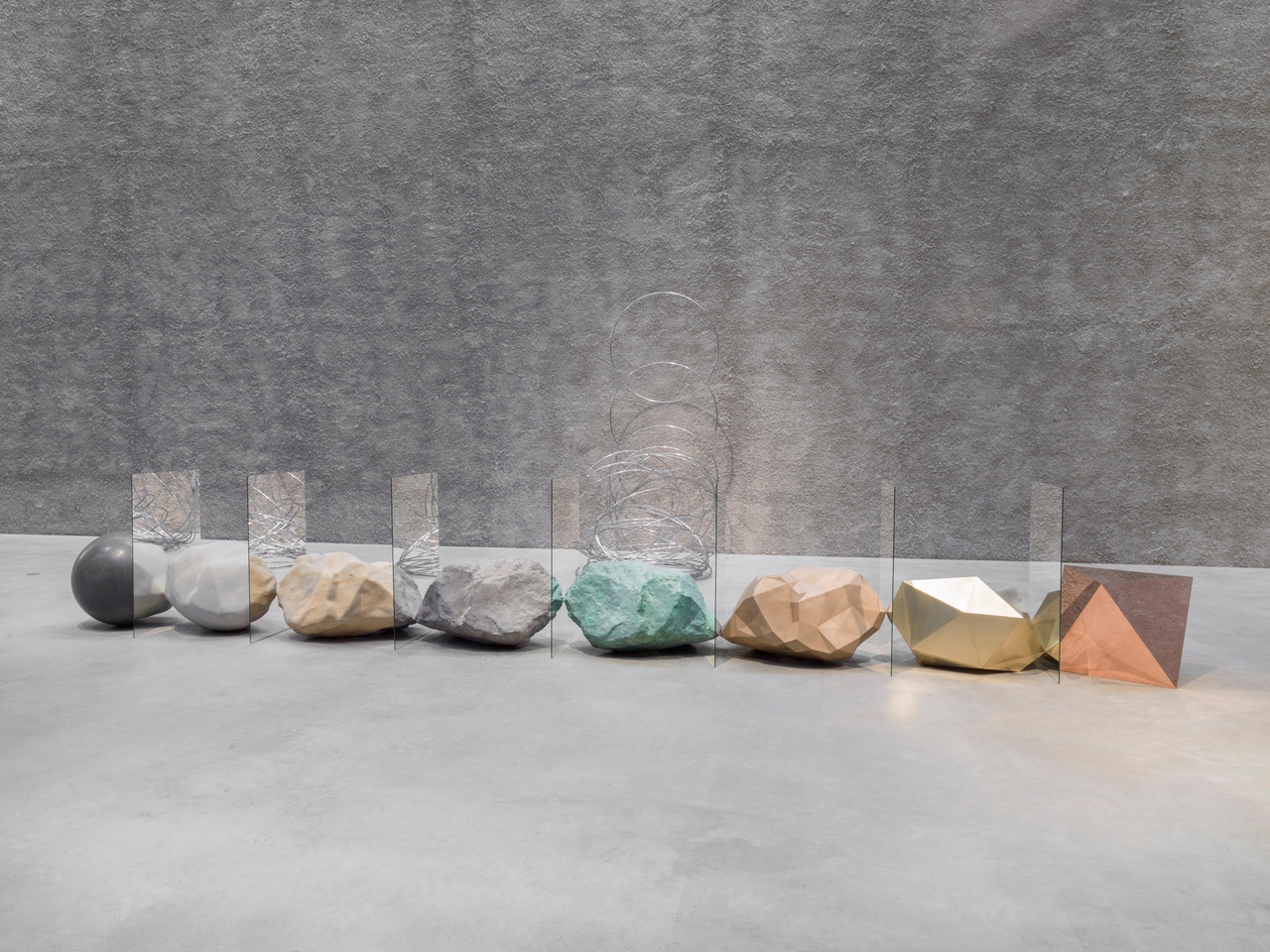 There is an additional work not on view in the nave space, but which very much belongs to the group as a whole: “Hemmungsloser Widerstand” (Unrestrained Resistance, 2010/2018), a multipart work featuring large, thin slabs of glass propped against a pristine white wall (perhaps the need for the white backdrop necessitated keeping it away from the nave), punctured by cobblestones, with a single stone posed on its own in front of the assembly, as if waiting to join the party. The shadows cast by the glass and stone on the white background make it almost impossible to figure out where things begin and where they end, a level of foundational uncertainty that puts an unfamiliar twist on the potential social relevance of Kwade’s “resistance,” and the implications of resistance here should be taken seriously.

There is an urgent need for the remediation of the aesthetic as a gateway to the long durée of experience, and Kwade’s embrace of the principle of contingency – what Niklas Luhmann called “modern society’s defining attribute” – is a first step in this direction. What is meant by contingency? In the most basic terms, it means this, more or less: that that which is could just as well be otherwise. For in the gaps and voids, there is the ghost of those supernova explosions that Kubler discussed, which put our own claims to fullness and immediacy in serious doubt, such that anything, let alone a work of art, could ever be fully present to us, or us to it. This idea of contingency is far more radical than the anti-aesthetic inversions that set out to critique the fullness or presence of the artwork while still relying on the shared belief that such information (fulfilling or negating) could ever be present. For the modes of demystification at work here float along the same ideological waters as those that cherish the irreducibility of the work of art; their direction is merely reversed. In either case, flowing downstream or up, the possibility for one to hold on to the slippery temporality of the world – the perpetual motion of the universe, as Kwade reminds us again and again – and halt its slowly devouring maw, is the great conceit of the aesthetic: to propose a step outside of time, and thus, outside of history. In light of this problem, how can we reliably separate the aesthetic disposition from the one that sends us running into the open arms of the experience economy and its prison of the self?

Tick, tick. The march is on, and while nothing can be undone here, it seems, the awareness of that impossibility can at least be made apparent by realizing a model of the artwork as an instantiation of a kind of scientific proof abstracted from a rule. We don’t have the rule, though, or a measuring stick, a compass, or even a frame – just the proofs – the shiny metal suspended in precarious forms, pushing and playing inside of gravity’s grip. Occasionally, the mirroring and vacuum effect becomes too literal, where the proofs seem staged more than enacted, as in “Eigenbahn” (2018), where two large metal rings face one another, each suspended in a rock form, donning matching bar stools – one antique, the other a copy. Two wooden sculptures share this directness as well, “abarchairisabarchairisabarchair” and “awalkingstickisawalkingstickisawalkingstickisawalkingstick” (both 2018), where the eponymous objects are partially excavated from a large tree trunk. In these works as elsewhere, production is only ever reproducing the conditions of the very impossibility that matter could provide an escape from the orbit that none of us had any hand in making. Isn’t this fundamental fact, and the acceptance thereof, a precondition for any politics of the Earth, of belonging in a general sense? 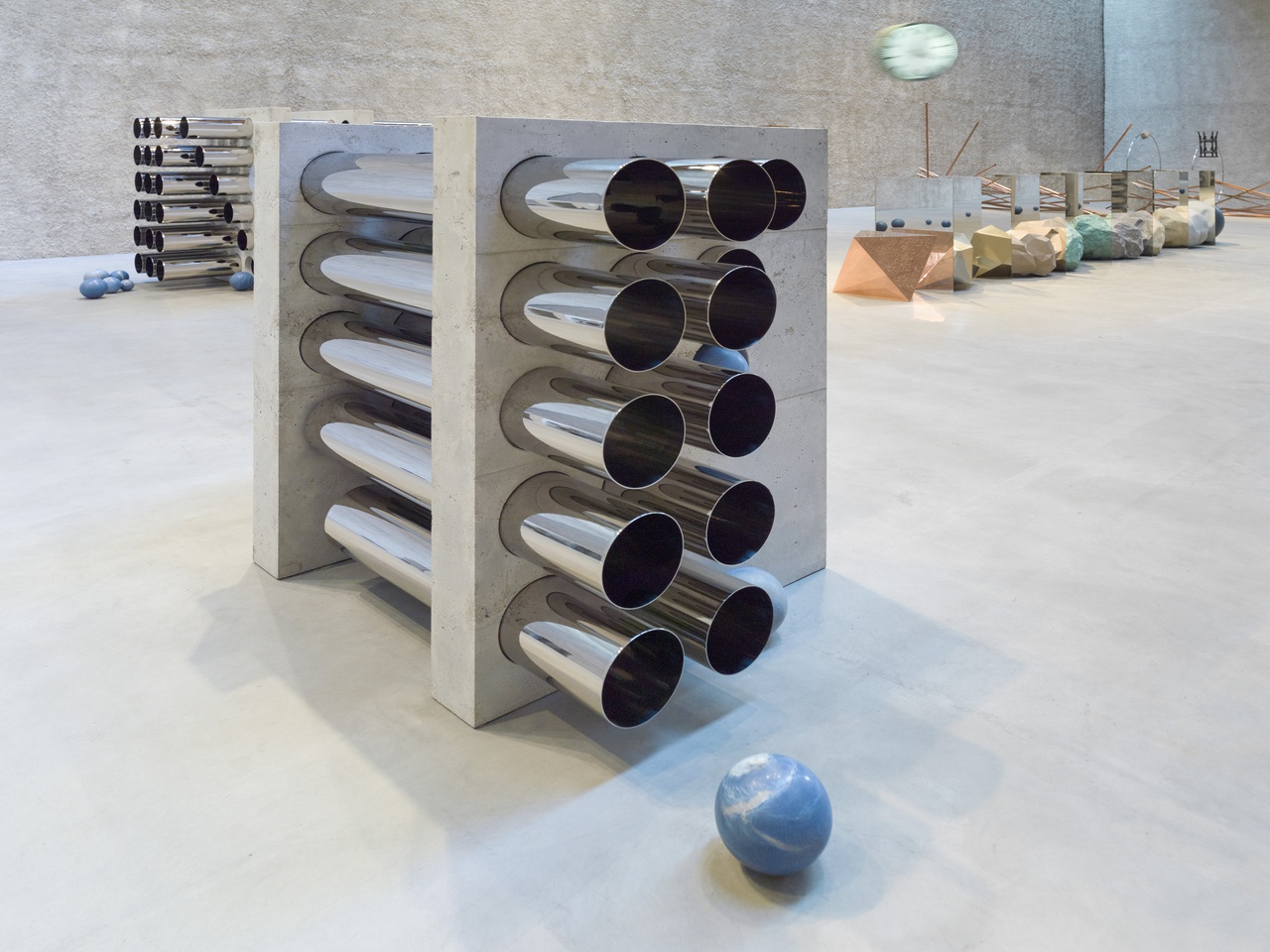 Kwade never gives us the chance to perform fullness or its negation, because what is present – the artwork – is already a void, an impossible appearance in the now that emerges from a prime object that never “exists in its prime state.” Kubler also had a name for this: actuality, something a very far cry indeed from “presence.” According to Kubler, “actuality is when the lighthouse is dark between flashes: it is the instant between the ticks of the watch: it is a void interval slipping forever through time: the rupture between past and future: the gap at the poles of the revolving magnetic field, infinitesimally small but ultimately real. It is the interchronic pause when nothing is happening. It is the void between events.” [2]

Kwade’s work is the kind that invites such musings, and lest they trail off into hippie claptrap of the unknowability and vastness of the world, let me make my point very clear. The awareness, the concretization of actuality (how’s that for a paradox!) that Kwade’s works perform, is the starting point for a more radical politics of distance; a revolution, one could say, but one that stands to learn a thing or two from the structure of scientific revolutions, which have contributed both to the destruction, and maybe the potential preservation, of this world. There are no solutions here, just clear demarcations – enacted over and over again – between our inner clocks and those clicking above our heads, between us and the world to which we both belong and yet don’t belong at all. At the risk of putting too much on this very elegant show, I would say that we better get used to the void. As humans, it is the system to which we all belong.