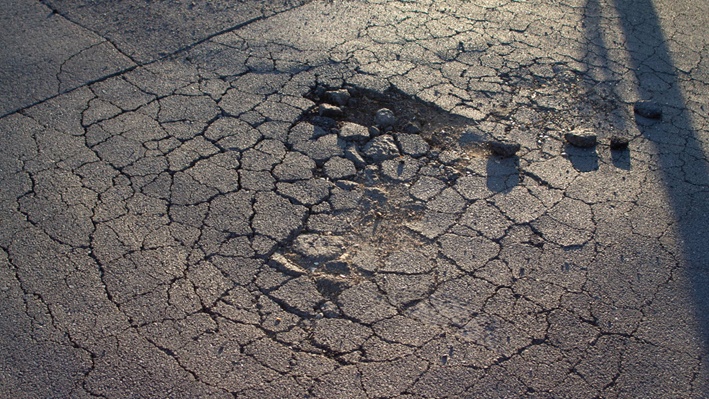 The idea that large cities exist in a state of constant change is something of a tautology, but it’s certainly true that some change at a faster rate than others. Nowhere in Europe is this more evident than in London, where rapid development and gentrification have radically impacted both the look of the city and its residents’ experiences of living in it. Here, artist Rachal Bradley reports from an exhibition that drew upon an unusual news story in the British capital in order to explore the point where the physical effects of urban infrastructure meet its affects.

Ten images of cracked tarmac, ten images of hedgerow, ten images of external brickwork. This is Kennington, a southeastern enclave of London. Relatively central, south of the River Thames, the area is buttressed by Elephant and Castle, Vauxhall, Oval, Camberwell, and Stockwell. Some of these particular areas have undergone visual and social transformation through the epidemic gentrification virulent in London since the early 2000s. Kennington is the neighborhood of the artist and the subject/setting of her work Kennington Shaft.

The film is modest. Constituted of 30 still images in total, they methodically pass through a full cycle on loop, each visible for 13 seconds, a subtle software effect imbuing the image surface as a ripple. Shot close up we see ciggie ends, small negligible stones, and slivers of leaves caught in the shallow cracks of the tarmac dermis. They move in a wobbly pulse as the ripple slowly flows across and from within the image. It is a simple and low-level effect. Moving from tarmac to hedges, the solid green of the natural barrier appears impermeable until it is required to breathe up and down. Dark holes in the mélange of vegetation are punctuated with glimpses of the scene (potentially a car park) it occludes. Finally, brick walls sigh in and out, bulging and contracting their patina and scars. (I’ve often thought there is nothing more satisfying than a brick wall, all lined up in purposeful arrangement, it simultaneously is and does like no other.) All of these surfaces display their pox marks, their battle wounds of the urban environment. One wall is as close to a visible asthma attack as is possible, ashen and dusty with dense, chalky spider webs blackened by grimy nitrates of pollution. The images are unremarkable, deadeningly boring save for the ripple. They offer no narrative, no claim; refreshingly, they are images of deep quiet inviting us to enquire about the life cycle within, beneath, below. But what is this life and who does it belong to?

The exhibition comprises a singular titular work, presented in the front room of the two-room gallery. It is projected at close throw on a wall not immediately first choice for such a purpose. This display wall is punctuated with a door frame and as such is not a “clean wall,” as normally favored. In this decision, the work sits awkwardly but precisely to site itself with some notion of its own boundaries, squeezed within this modestly scaled setting, in fact the living room of the former school janitor’s house.

The projection itself is scaled to beyond domestic dimensions but stops short of the cinematic, indeed the spectacular. With a couple of pre-WWII wooden school chairs providing seating, the feeling is more of using what is at hand than the “designed” gallery viewing experience. But so what? What of these pro-choice non-choices?

Potentially, if one can contain and hold the aesthetic psychosocial discussion of the “everyday” prompted by the film, it must be located here in the precision of these very decisions. Sharpness arrives in this precision, divulging the sense that the operation of the artwork is not located solely in the film but also in the attentiveness of those further artistic decisions laid out with the main course. The exhibition text, the chairs, the close projector throw, the wall: all set coordinates for experience, interpretation, and agency, rather than delivering the “artwork” as heralded, de facto, whole, digestible, and privileged above all else. 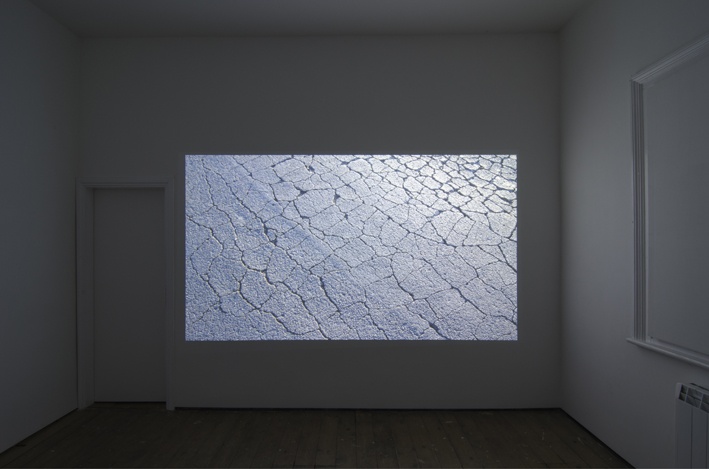 The subject-setting of the images delivers this further into a specific aspect of the “everyday,” into a space of infrastructure. The images are barriers of the urban spatial arrangement as part of architectural infrastructure. Their importance dissolves in the interrelations of environment and so proceeds the assumption of such emblems of infrastructure as firm background or fill-in, albeit not neutral despite and because of its stalwart and continuous presence. Henri Lefebvre cites the importance of the body in such spaces, as without the human body there would be no space, inspiring the Situationists into treating the city as an activist site, and “Kennington Shaft” expands on what could be understood as a methodology for recuperating agency within this “schism between subjects’ perceived and lived spaces of activity and ‘objective’ scientific-technological spatial structures […] bridged by ‘ideologies of space.’” [1] What Lefebvre saw at stake here is the production of social homogeneity, coercion, and control within these “ideologies of space,” long before London became the city with the most surveillance cameras in Western Europe.

The exhibition text here is a further site to ripple coordinates, gently reinforcing the subtle and vital tone of the film. The use of the exhibition text by the artist nods to a very specific infrastructure particular to contemporary art. Nothing new here perhaps, but this text goes beyond the flippant, novelty gesture of reascription of different con-tent/text. It shows an image from the Sentinel-1 weather satellite, a different kind of image than those in the film, one created from data relating to the depth of ground at certain geographic points. Around the Oval (an area next to Kennington that is home to the eponymous international cricket ground), there’s a black spot, a hole? The text confirms this is in fact a sink point in the ground caused by the boring of a 25-meter ventilation shaft at Kennington Park as part of the Northern Line underground extension, which is being developed in part to serve the new American embassy at Nine Elms, Vauxhall. As a former resident of this area, I respond quickly and with knowledge of such developments. I appreciate the quiet consideration of the artist’s middle-fi images and the repetitive lifecycle of the film as an attempt to “describe the physical interface” between the artist herself and her neighborhood. I appreciate the subtlety of the lateral-literal approach, the desire to go further than a surface discussion of gentrification and into the spiritual and emotional dimensions of infrastructural development and attempt to digest change on geological scale, sometimes invisible, except from space.

But what is the affect of showing such a work in a gallery located in Nottingham, “Brexit-land,” as some might describe it? As a city, it does not share a subjection to the rampant forces of gentrification as per London and other metropolitan centers. Although this, I could guess, is perhaps the desire of unimaginative powers such as the local universities, blank “developers” Ltd., and the local city council converging in a trinity to provide progress and contemporaneity. To answer: without the artist’s text, the gesture of this film, this visual description of a neighborhood, might be viewed as deflating and obscure. The text maps elegantly and with lightness of touch coordinates for symbiotic experience with the film. Written in paragraphs of seemingly disparate points, it does not seek to explain out the film but to create community between these disparities, as one might do in a neighborhood. At first a declaration of intention of discovery, the artist attempts to understand her neighborhood, the flow of her body through the container of the world, where she the body might meet a barrier, and where human condition might make sense of worldliness by peering through the cracks. The text has absorbed the desire for agency in this infrastructural space. It endeavors to chew, slowly and bovine-like, the movement under our feet and our inability to imagine the horror this may efface. This is beautifully eschewed in the artist’s reference to a man who did not have a bad narrative dream until reaching his teen years. Prior to this he only dreamt in unsettling textures. Images of texture purveying the nightmare of being precluded from tactility and narrative, from creativity and agency. References to the Victorians’ preoccupation with the “other side” and to immaterial, energetic forces present in our environments reflect what is alive in our space, and what kind of altered logics could be created for description (this being the first unit of measurement and standardization).

There is a lateral specificity of the work’s display here in TG Gallery. Any resident of a neighborhood, once alienated from its tactility, experiences the true horror of gentrified development, of decisions being taken for you emotionally and literally shifting the ground beneath your feet. If a neighborhood is only image, it cannot be lived through the human condition, it can only be used. The artist has offered us a space through her own version of “wrinkle prediction,” a term used in material science to refer to a point of weakness where the material comes under strain, visibly performing a wrinkle or crease. As the artist explains in the text, the bulge and warp filter offers the viewer a moment of disturbance of the image of the urban barrier. A semblance of a possibility to imagine agency through the sharing of vitality between the enormous Goliath scale of infrastructure and the container body of the human artist in a way that both is and does.

Rachal Bradley is an artist based in London, UK. Her work explores systems and infrastructural and constitutional theory.