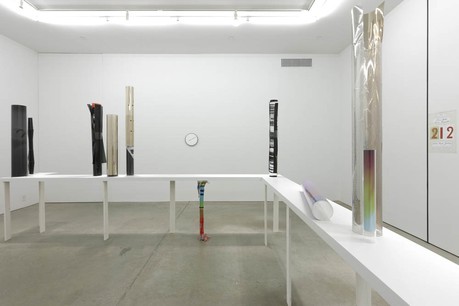 Yet each man kills the thing he loves

As the adage goes, if a show isn’t reviewed then it doesn’t exist. However, instead of considering this saying in terms of a need to simply circulate an exhibition as part of a hype and critical validation machine, publishing of course offers another value, posterity. Beyond the goals of the text, the catalog in particular has become a source par excellence for artists to dig and borrow from, taking cues from photographic reproductions of artwork in old magazines as well as other printed matter. And although this provisional library has been yellowing since at least the 1960s, it does offer a wealth of inspiration. The pitfall of this kind of influence is that it can lead to simple aesthetic absorption and reiterated quotational art making, as knee-jerk visual affinities, over seeing the work in person or of considering the accompanying text closely, leads the production of new work—which in term fosters a form of art criticism by analogy instead of analysis. It is this push and pull between the forces of sympathy and derivation, which lay at the heart of Steven Baldi and Lucas Knipscher’s recent two-person exhibition at Andrew Kreps, their first commercial gallery showing in New York City—although not a collaborative, the two artists share a studio and occasionally work in tandem on projects, most particularly in a related iteration of this show at Vox Populi Gallery in Philadelphia earlier this year.

When entering the gallery, the viewer is approached by the now familiar austere stance one accepts as a trite “critique of modernism”; Spartan placement of monochromatic work that appropriates the style as style of say Bauhaus design or whatnot and is often divested from the political underpinnings, or goals in its own historical consequence. In this show, Steven Baldi in particular poaches actual designs by Max Bill via a series of exhibition posters imbued with the designer’s typography as well as 6-photorealistic paintings of one of his clocks manufactured by Junghans—it is also complimented by facsimiles of Le Corbusier and Amadée Ozenfant’s magazine L'Esprit Nouveau. These simulations of course were all sourced from monographs, and could point to rather shell-like allusions to Bill, Corbusier, et al’s agenda. However, instead of simply reproducing the image as an empty sign of familiarity, the strength of Baldi’s offer is in its display, in space, and with it, its chide at photography, documentation, and distribution.

Eschewing, for the moment, the rhetoric of photographic simulacra, the show’s layout offers something that a camera simply cannot do, that is to represent space and the unfolding of spatial order in time 4-dimensionally. This is done not by just having the referent act as an insider’s cue, but through the repetition of these images as flags or, quite literally, as physical reference or focal points.

On the walls of the gallery, Baldi presents 3-main devices, the clock paintings, the posters, and long leather strips of trimming resembling wristwatch bands—a forgivable pun indeed. All of these elements encircle the space, however, their pacing, although balanced, is irregular. At one moment a clock is presented next to a band, at another, the band is alone, and on another, it is conjoined with a poster to make a kind of flag at half mass—a tongue-in-check reference to death, perhaps? This serial change of frame of course mirrors that of animation—humorously, there is a 16mm film of a perched African Gray parrot also included in the show, which might be another ape at those who repeat and copy without reflection. Yet, when configured in real space, in real time, these frames act as data to delineate a visitor’s relation to these objects and the viewer’s visual field and memory—also aided by the fact that each analog clock reads with a different time. This regimented dividing of the space is further enhanced by Knipscher’s display.

For his section, Knipscher presents a series of appropriated images from photographed movie posters, such as Joel Schumacher’s The Lost Boys (1987), to pictures of manicured hands, which are all printed on color tinted window films—a material with a gloss that is hard to photograph without serious manipulation of light and shadow. Instead of presenting these photographs as pictures to be viewed in the normative fashion, they are all rolled into tubes pinned together by magnets—and as such are best viewed in the round as 3-dimensional objects. In suit, these cylinders stand on a zig-zag conveyor belt-like table, which not only snakes throughout the gallery, but does so at about the level of a bar or low counter setting up a recognizable relation of a visitor’s body to the space it occupies. In addition, this shelf takes on the semblance of an old storage room archive in which old rolled up ephemera sit silently and unread. 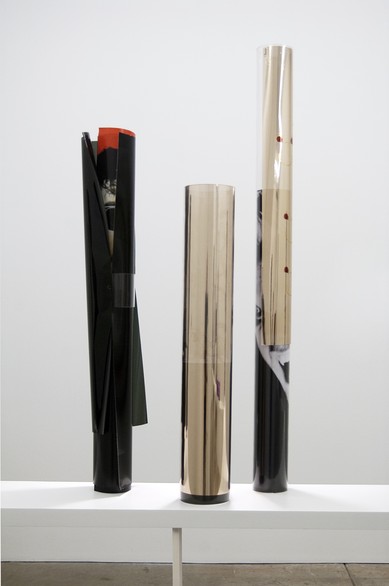 The gallery space itself is rather simple, a white rectangular box almost bisected as two walls jut out from center to form a clunky barbell-like plan. Enhanced by Baldi and Knipscher’s simple interventions, the one creating vantage points on the perimeter, the other defining two zones within the gallery, the display defines the space through a promenade within it: one movement to the left, and an object is precluded, a few steps more, another is relieved. These apparent “jump cuts” between location in the gallery as well as between 2-d and 3-d objects, are made smooth as each is grounded on a given, set plane.

To borrow from the rhetoric of mid-20th Century art and architecture, this kind of layered dance between objects slipping in and out of view can function to create a “contradiction of spatial dimensions”, while at the same time imply some fundamental order as shared rhythms and massing ultimately from a logical master procession on the whole.  Building on New Bauhaus (IIT Institute of Design) theoretician György Kepes’ idea that this overlapping produces a form of “transparency” wherein a “simultaneous perception of different spatial locations” can be superimposed, theorists Colin Rowe and Robert Slutzky proposed that this “inherent quality of organization” was a central and innovative device employed by Le Corbusier—for an example, the writers point to the plays of flatness and depth visible across various vantage points in the Villa Garches.  Rowe and Slutzky went on to say that this form of transparency “ceases to be that which is perfectly clear, and becomes instead that which is clearly ambiguous”_1.It is worth noting that Baldi and Knipscher did present an exhibition, which had to be visited in real space to comprehend—and thus is more about primary experience than record—while also actually following the design procedures of their forbearers, instead of hinting at them. Yet, a greater paradox as to their actual relation to glib referentially in general should be addressed—and in so doing possibly points not to the artists understanding of Max Bill, Le Corbusier, et al’s political milieu, but our own contemporary one.

The choice of the word “ambiguity” to describe the momentary confusion of order that occurs when two agendas are set apart dialectically is one worth exploring here. In addition to the physical issues of Baldi and Knipscher’s exhibition, which compliment the ideas of Rowe and Slutzky, there is also another overlap: are the two trying to cast yet another new derivative from the same old mould, or are they attempting to break through it? On the one hand, the two have dug into the archive of representation and basically reiterated it, yet on the other, they have done so in an artistic way that really must be seen first hand and not via its reproduction as more documentation. Along these lines, two curious interjections by the artists stand out.

The first is a simple little catalog, which sits at the gallery’s front desk. More cut-up chapbook than standard essay, it features mostly appropriated texts and images which one could suppose ramble on the use and distribution of images, most particularly in its reprinting of several pages of Roland Barthes’ Empire of Signs. As a counterpoint, this booklet in relation to the show, can be read as a satire of contemporary art speak and pastiche, however, since the booklet will circulate as a record devoid of the actual exhibition, it poses the greatest possible folly of the exhibition. The second item within the show concerning the “quotational turn” is a Plexiglas sculpture by Knipscher cut to look like a speech balloon. Although materially transparent, this object is empty in the sense that no quotation is actually printed onto it. And as a further jibe, the triangles, which usually descend from talk bubbles to point to the speaker, are here rendered as a vampire’s fangs—an idea hit home by one of the rolled-up photo objects sourced on the horror movie poster for The Lost Boys, 1987. With this object, Knipscher could be pointing to the idea that the artists may not actually be simply alluding to the work of others, but highlighting the current quasi-academic trend to suck dry styles from art history without leaving much behind in way of anemic commentary—the piece rests on its side, on the floor, as if it is either lurking or has been deposed.   As noted, although the artists have come together for this project, it will be interesting to see if these stances will run as a subtext in their own independent work.  Only then will we see if the artists are actually bitten by their own critical teeth or not.

1_ Colin Rowe and Robert Slutzky, Transparency:  Literal and Phenomenal, In The Mathematics of the Ideal Villa and Other Essays. (Cambridge: MIT Press, 1982), 160.