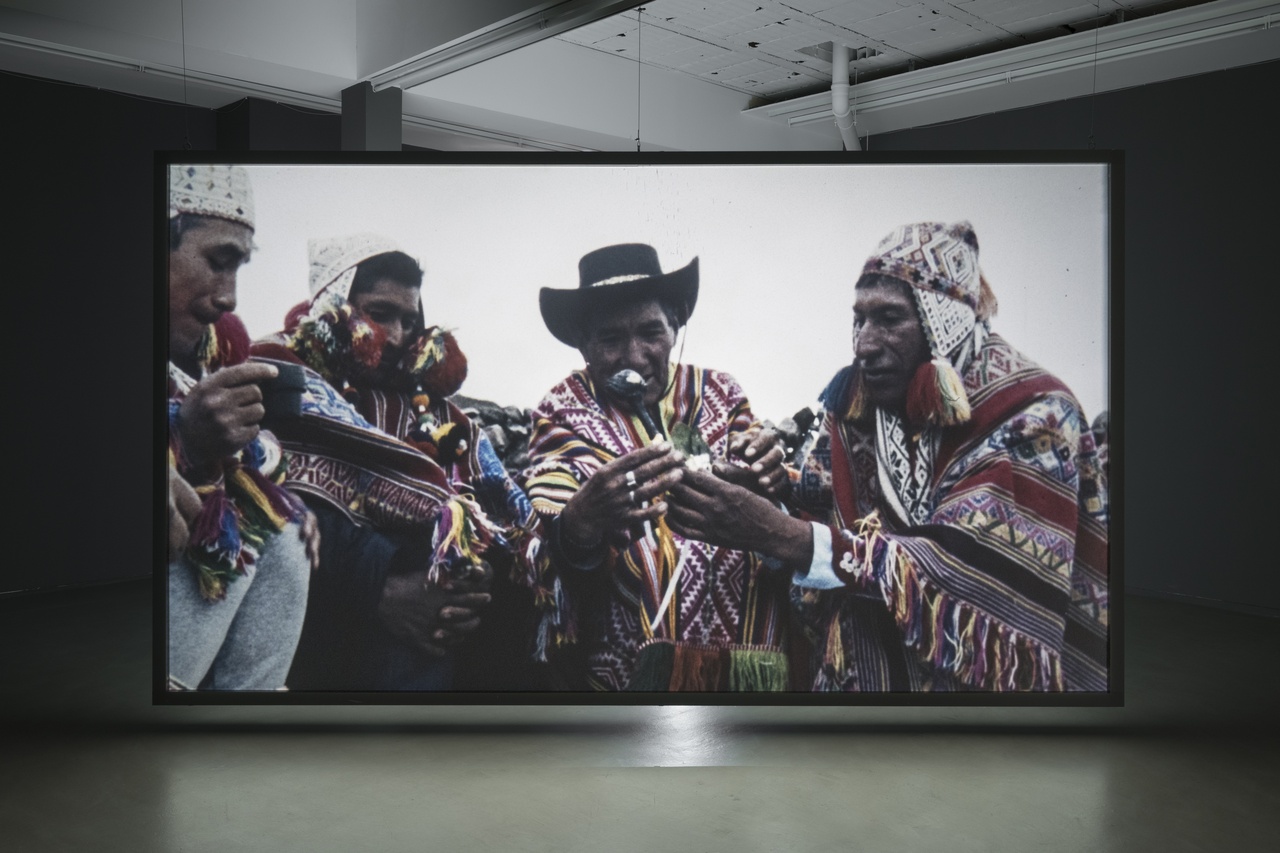 Andean glaciers are melting due to global warming, due in turn to a carbon- and fossil-oil-fueled global development model. Rosa Barba’s new filmic installation “Aggregate States of Matters” is the visual and narrative testimony of Barba’s trip to the Huascarán massif and other locations throughout the Peruvian Andean region in order to study the impact of climate change in so-called ‘remote’ areas. She films the Andean communities, their day-to-day agricultural labor, their religious rituals, and their new environmental worries and difficulties. Curator and art critic Javier Montes interrelates the effects and causes of climate change depicted here with the global health crisis caused by the coronavirus pandemic.

I visited Rosa Barba’s show at Parra & Romero in Madrid on February 28, and I am writing about it on May 15. A lot has happened between these two dates. The exhibition (and perhaps all of Rosa Barba’s recent work) takes on new and urgent meanings in light of the global health crisis caused by the coronavirus pandemic.

The selection of works shown revolves around a fundamental new piece, Aggregate States of Matters (2019), a filmic installation in which a large 35mm projector plays the film of the same title. The quote that serves as its epigraph can be used as a touchstone or tuning fork of the sound of the new times the pandemic has abruptly brought upon us. It is taken from a book by environmentalist Rob Nixon: Slow Violence and the Environmentalism of the Poor (2011). I suggest a simple home experiment. Read it twice: first, with your February 28 mind. Then, with today’s:

Those “slow moving” and “long in the making” emergencies and disasters to which Nixon refers have incredibly sped up and become a reality (“dramatic enough” indeed) since February. Barba proposes her work as a possible answer to Nixon’s question: how to translate into the artistic field those very disasters that seemed to be moving slowly in February, and to which the global pandemic (all the redundancy of the term considered) has given such momentum that it risks nullifying our ability to understand them.

Aggregate States of Matters is the visual and narrative testimony of Barba’s working trip to the Huascarán massif and other locations throughout the Peruvian Andean region, in order to study the impact of climate change in so-called ‘remote’ areas. It takes on new meaning now that we have suddenly realized in the most brutal way that the word ‘remote’ has become useless if not dangerous. Both geographically and metaphorically: the effects and causes of human activity on this planet (climate change and global warming provoked by carbon-based industrialization, planet-scale deforestation, threat of a new global mass extinction of biodiversity due to unsustainable production and development models, and massive rural exodus leading to an increasing percentage of the human population concentrated in huge conurbations) are not only closely linked but form a continuous whole. This continuity, both physical and ontological, is dismembered through an artificial but reassuring notion of ‘distance’ – not only artificial, in fact, but also implicitly colonial, since the whole colonial mentality and corresponding extractive models depends on the strict establishment and preservation of political, geographical, and socioeconomic compartments between those territories where resources are extracted and profits are made and those where capital is accrued and its benefits and added value enjoyed. The false securities of invulnerability and dissociation enabled by this fiction of distance (how exhaustion or pollution of natural resources in remote colonies were thought of as if unrelated to the well-being of distant metropolises, for example) endanger our very individual and historical existence.

Barba collects a less dissociative and more all-encompassing approach from the Andean communities with which she works: by now, they know all too well the way in which very ‘distant’ carbon-fueled industrialization can endanger their very means of survival by altering their fragile ecosystems. Their faces and words dot the film as possible answers that mirror, as visually shown and depicted by Barba’s camera, Nixon’s question: she films their statements, their day-to-day agricultural labor, their religious rituals, and their new environmental worries and difficulties, voicing and embodying that very possibility of translation of abstract disasters into harsh realities about which Nixon speculates.

Andean glaciers are melting due to global warming, due in turn to a carbon- and fossil-oil-fueled global development model. At first, and with an apparent sense of linear narrative progression, Barba films the no-longer-perpetual snows and the large pipes that channel snowmelt and transport it to the immense newly irrigated areas at the foot of the mountains, where intensive agriculture has taken the place of previous traditional systems of extensive production from renewable resources. In descending order, we see snow-capped peaks, new alpine lakes, irrigation systems, and luscious green valleys where llamas graze. At first, Barba seems to submit, deceptively, to an Andean version of the narratives and poetics born out of Germanic and Alpine Romanticism: that of the sublime. It is familiar, it is comforting. And unfortunately, it is now useless and even harmful.

The tale is interrupted; its reassuring images are suddenly covered with written lines that transcribe fragments of technical reports. The soundtrack picks up the murmur of countless warning voices: “Hasn’t reached a point of collapse yet” … “Still providing water” ... “Hydric stress not yet present” ... “Emergency measures” ... “Possibility of avalanches”. “Yet,” “still,” “emergency,” “stress,” “avalanches”: keywords. Hypothetical in February and tragically factual in May due to the coronavirus crisis, this has shown us how abstract scientific warnings and projections related to ‘slow’ natural disasters and emergencies can become factual and pressing overnight. The snowmelt from cyclopean glaciers now providing short-lived agricultural mass production will end soon and won’t be replaced. The Western Romantic poetics of the sublime is incompatible with notions of limit, finitude, fragility.

Cleverly, Barba introduces in her film zenithal takes of the snowy peaks filmed from an airplane. We understand: a landscape is only sublime seen ‘from below.’ The visual and conceptual power of the sublime is deactivated from a pilot’s-eye view (that of any global traveler flying over the Andes on a continental flight who sees them while contemplating the choice between chicken or pasta). Barba chains them with images taken by satellite, with photographs of topographic maps of the region. Caspar David Friedrich against Google Maps, the sublime against the Anthropocene. 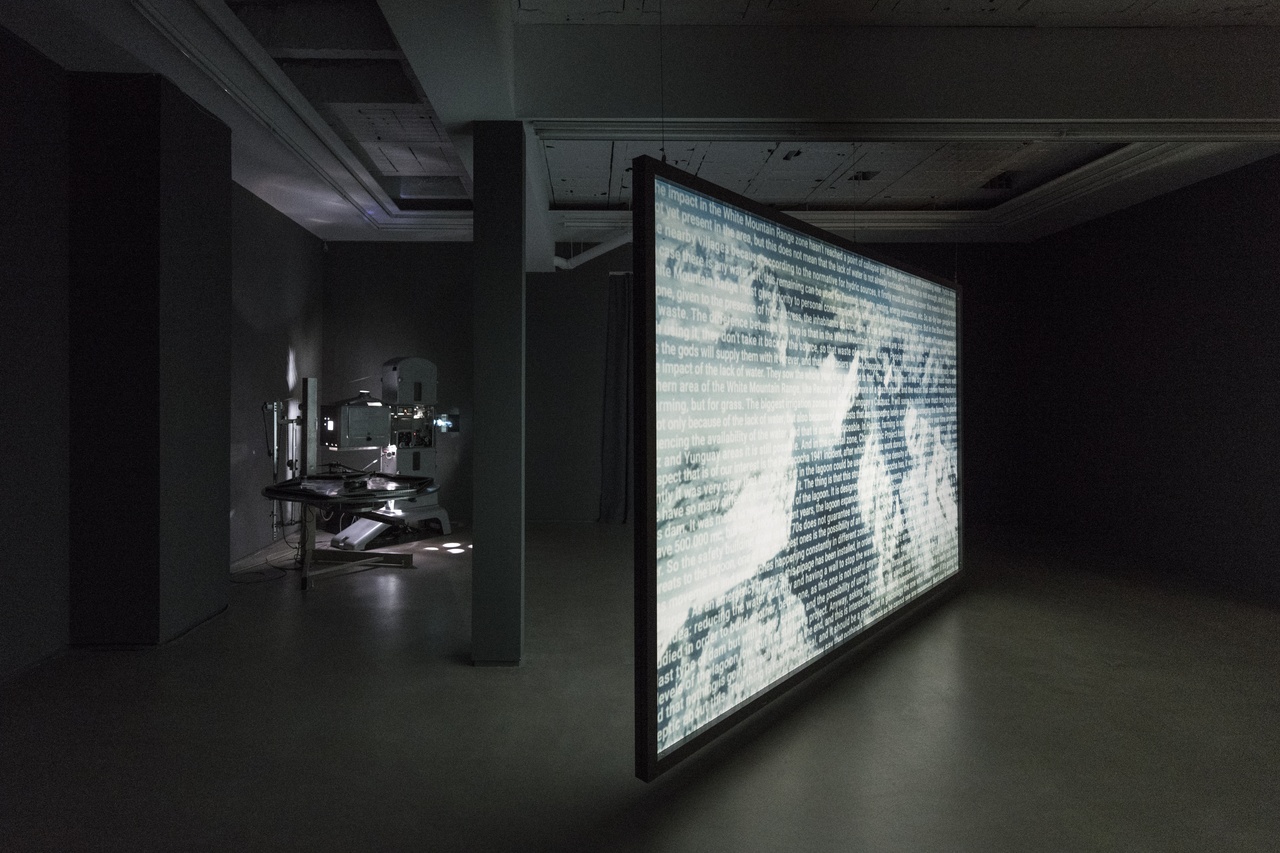 Later on, the film shows dry irrigation channels carved out of the Andean slopes by the Incas: ancient terraced farming systems that for centuries have made use of resources sustainably; archaeological testimonies of a past that nevertheless are implicit but direct appeals to our present. Both ruins and prophecies. In the same way that the melting of once-eternal snows will mean not-so-distant future ruin, in Barba’s work, the nineteenth-century poetics of the sublime melts into the all-too-contemporary ethics (and aesthetics) of ruin: both as a trace of the past and a map of the future.

I wrote a few years ago that Barba’s entire corpus of work can be read as a reconsideration and reevaluation of the concept of ruin. [1] Barba has done a lot of work on ruins in previous pieces. This has been formal, by filming old bus cemeteries, training tracks in the Mojave desert, and concrete bunkers on the slopes of Vesuvius (which has its replica here in an eerie artificial reservoir built on the slopes of the Andes), and also conceptual, exposing the hidden technical infrastructure that makes possible the projection of those images. Here she rescues the physical support once more in order to produce a work midway between sculpture, film, and installation. We sense the huge projector behind the screen, and we actually see it if we care to go round to take a look. Antediluvian projectors, celluloid strips, flickers of light, the purring of the celluloid when running through the reels. Our ruins run fast too: we all know that, in terms of technology, the model immediately previous to the most recent is the one that seems most obsolete.

Barba engages in a peculiar industrial archeology that is also an exercise in what might be called ‘mental archeology’: by making visible and drawing light to the usually hidden technical and mechanical infrastructure of image reproduction, she also metaphorically evokes the ontological mechanisms with which we apprehend (and, in reality, create) the illusion of its movement and its apparent reality. Barba’s use and systematic visibilization of all those technical devices (necessary to the production and consumption of moving images) work as a poetic and artistic metaphor that raises our awareness about our whole visual culture, inviting reflection and proposing careful consideration of the way images are mass-produced and consumed. It is the ruins of cinema, of our image culture, and of what Nixon calls our “image world,” that she explores.

Cut to black. Back to the future.

Here and now, in May 2020, the voices of the inhabitants of the Huascarán region are heard again towards the end of the narration: “We are no longer Inca, we are a mixture of Quechua, Aymara, Amazonian populations” ... “Before, everything had its meaning, now it doesn’t” ... It is in May 2020 that they resonate with more urgency than ever, since we have now proof, if any has been needed, that similarly ‘slow’ emergencies and pending catastrophes experts have warned us about can be unleashed and become actual dangers to our survival literally overnight. Barba documents the loss of meaning of ideas of a sublime nature (invulnerable, infinite, inexhaustible) and proposes a re-construction of meaning over their ruins. We have very little time left to make life viable among them.