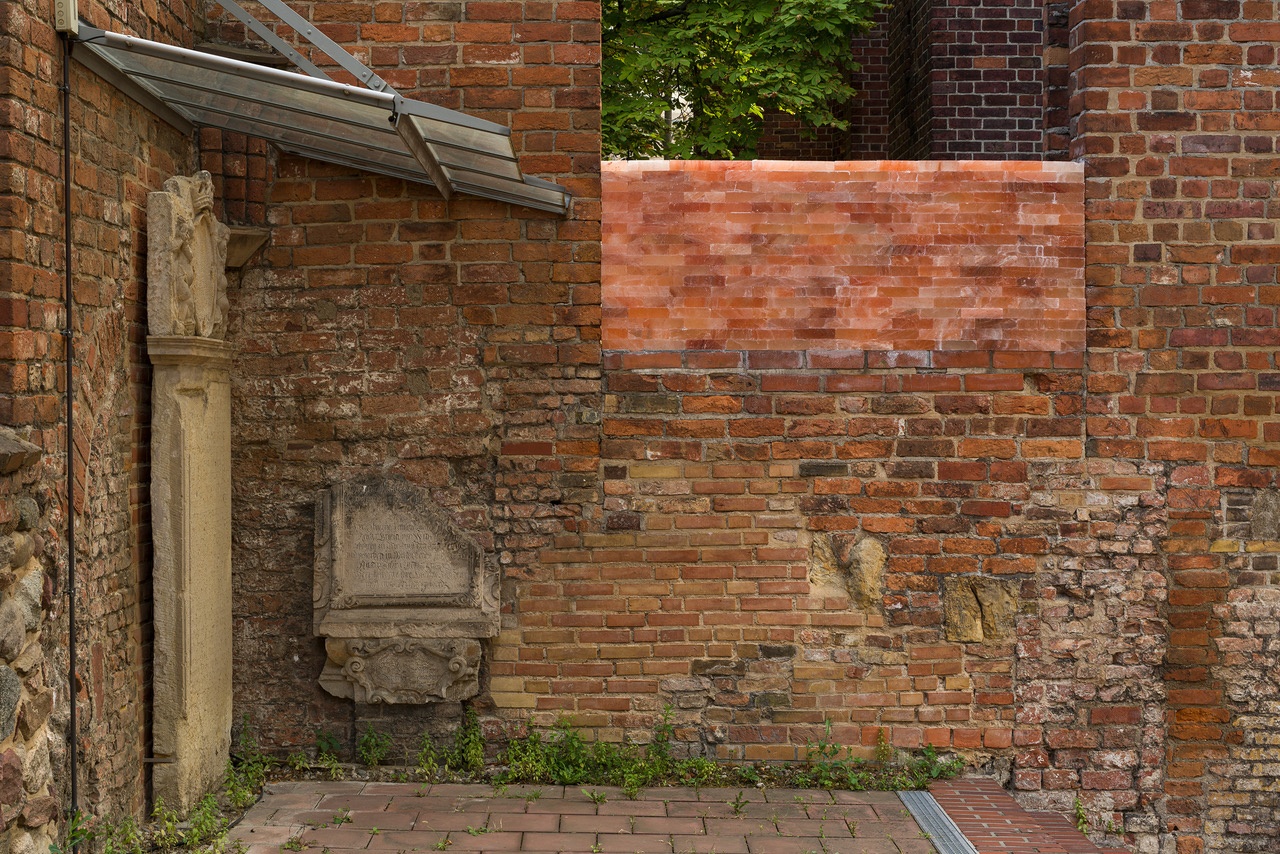 Intentional positioning as orientation plays an integral role in Nora Schultz’s and Mirjam Thomann’s site-specific art practice. Their joint exhibition “3 Months Later” at Klosterruine Berlin manifested the artists’ sensitivity to the material, architectural, and cultural characteristics of time and space. Through their sculptural installations, Schultz and Thomann responded in a mimetic yet complementary way to the porousness and historicity of the medieval monastery ruins in the center of Berlin and established a relationship with that space by situating their works within its edges and openings. Writer and curator Camila McHugh reviews the exhibition with particular focus on the spatiotemporal experiences that it offered.

Reflecting on Nora Schultz’s and Mirjam Thomann’s duo show at Klosterruine in the days after Bruno Latour’s death, I was struck by the resonance between the show and one of the late French philosopher’s many insights in his 1991 book We Have Never Been Modern: “The world is not a solid continent of facts sprinkled by a few lakes of uncertainties, but a vast ocean of uncertainties speckled by a few islands of calibrated and stabilized forms.” [1] The sentiment of the pithy statement speaks to the show’s attempt to communicate and embody such a contingent instability while the mental image it produces conveys the sparse arrangement of six sculptures throughout the outdoor space. The show proposed site-specificity as a form of orientation – a kind of tuning in – to a continuously changing set of conditions. Both Schultz and Thomann are artists whose sculptures develop from careful attention to the structures into which their works are integrated, be they architectural, historical, sociopolitical, or institutional. Sculpture becomes an act, a form of positioning, and a way of building relationships to a particular space. 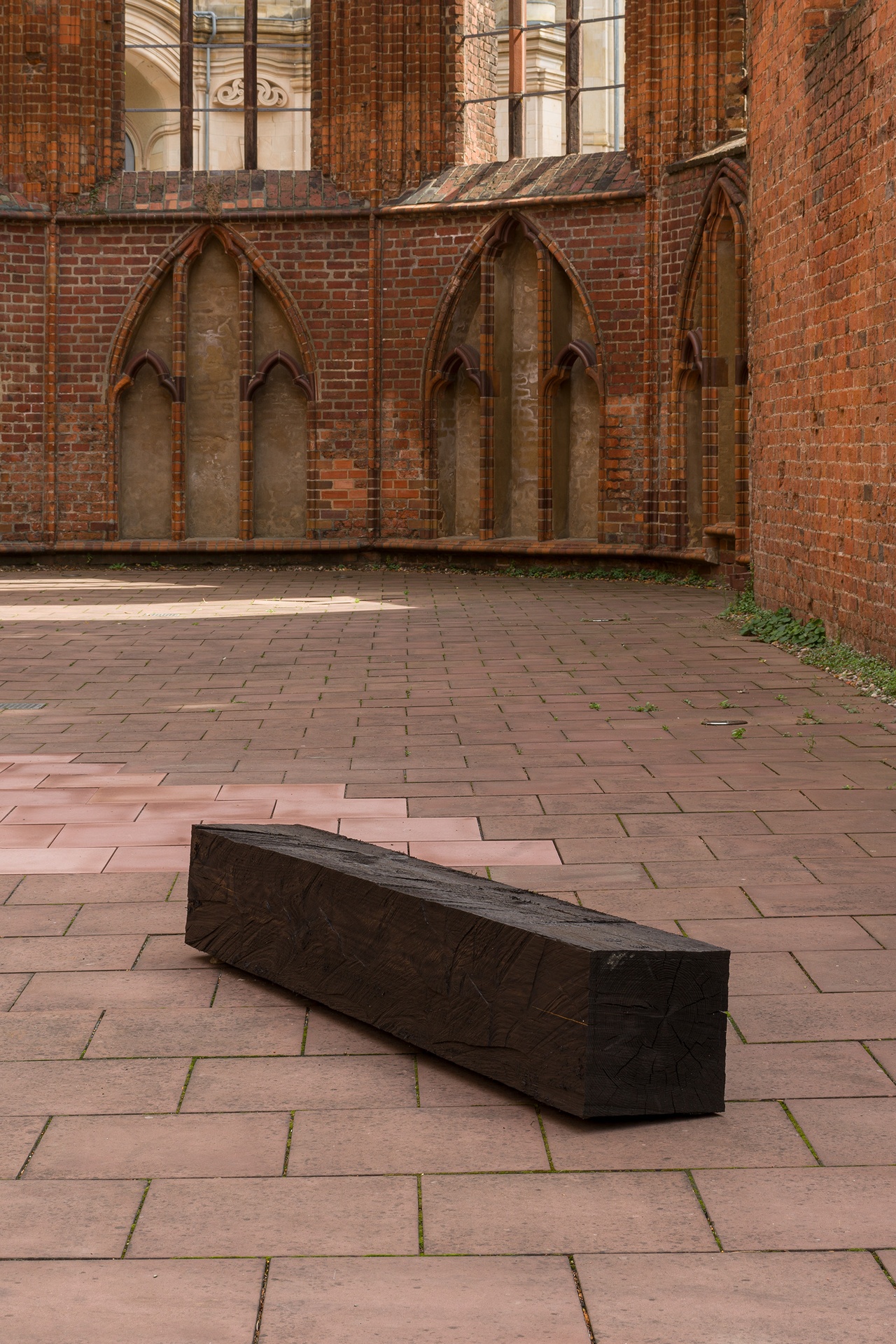 Organized by Christopher Weickenmeier, “3 Months Later” steered visitors toward temporal reflection via its title, which referred to a multivalent deferral. Most explicitly, the show was postponed due to pandemic-related shifts in scheduling and opened three months later than originally planned. But naming the exhibition after this duration also unsettled a sense of its opening as a commencement, marking this instead as a moment that followed months of conversation and work in progress. The title set the tone for an interest in how objects come into being, as well as how they might continue to change. The allusion to this process of development mirrored both artists’ long-standing interest in making production legible, a stance that already subverts the possibility of a “final” form. Thomann arranged one thousand pink salt bricks in three configurations that mimicked and extended the architecture of the Franciscan cloister ruins that constitute Klosterruine in Column, Window, Step (2022), while two of Schultz’s works, …as heard here by a glass pane (2022) and … as seen here through a glass lens that wouldn’t stop finding (2022), devised contraptions to convey aural and visual impressions of the space via pieces of glass. The artists’ subtle interventions homed in on the temporal conditions of the space by underscoring the mutability of these material responses. In so doing, the show questioned reliance on fixity and finishedness implicit in the exhibition as a general format, as well as the illusion of the coherence and permanence of an art object. Presented in the outdoor space, the works maintained a precarious form of potentiality because of the possibility of their alteration from exposure to the elements. Changes to the metal, wood, and salt were minimal throughout the summer months, but the prospect of subtly continuing evolution was at the core of the project. Interestingly, what the state of the works might have been three months later, which the title also seemed to name, remained unknown, as the show lasted only two months. Playing out these possibilities may sound somewhat overwrought, even finicky, but the show seemed to suggest that this was the process of loosening your grip on steadfast assumptions. I imagine a fist aching after having been tightly clasped for too long. Schultz’s third work in the show, Lucia’s 4 Roads (2022), a painted pinewood beam, embodied this attention to spatiotemporal permutations as well, as each of its sides was likened to a path. The black, bench-like wood was the most immediately apparent intervention into the space, vaguely resembling a minimalist art object, while the other pieces camouflaged somewhat into their surroundings. The work casually rejected minimalist emphasis on wholeness, however, by reconfiguring the simple beam to stand for multiplicity and many forms of passage instead. 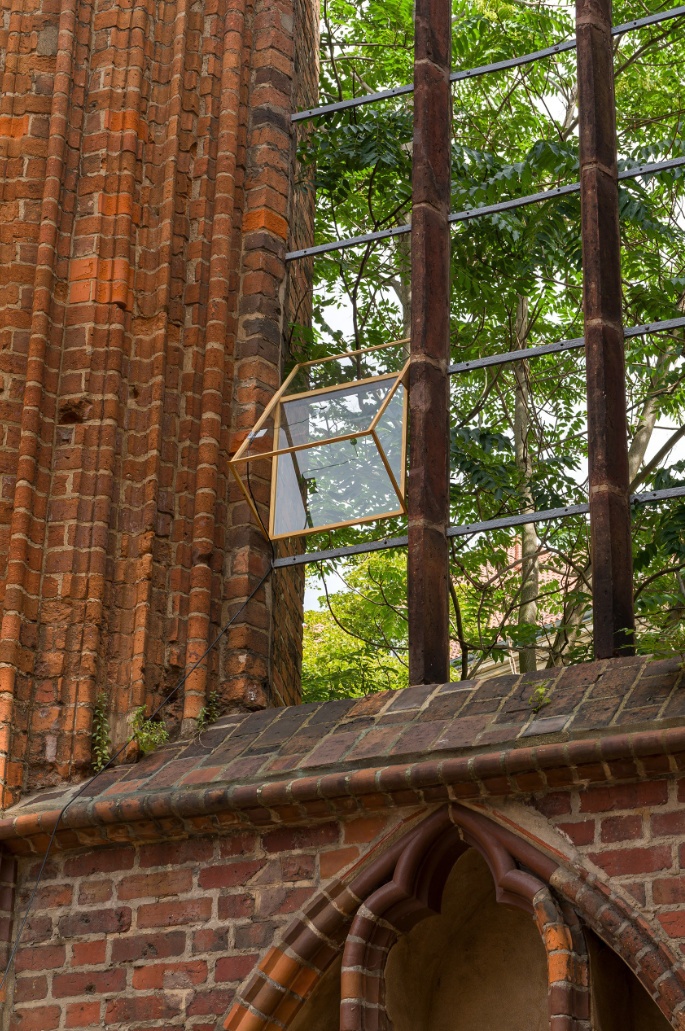 In a similar vein, the exhibition took on legacies of land art with its often grand and monumentalizing conception of site-specificity as an incursion into the blankness of open terrain. Klosterruine resembles an empty stage, as the six long steps that traverse the length of one end of the space function as a place to sit. But Schultz and Thomann skirted this center, installing their work mostly along its periphery, near the edges and nooks toward which one seems to naturally gravitate and linger. Steeped in the romance of ruin and inscribed with Berlin’s weighty history, Klosterruine itself assumed the status of a kind of sculptural body with qualities that the artists amplified, as their work functioned primarily to heighten perception of the charged and open-ended space itself. Built in the late 13th century, this medieval construction was largely destroyed in a bomb raid in 1945 and its remains collapsed or were torn down to facilitate construction in the subsequent decades, leaving a roofless fragment of the brick enclosure. As visitors descend a series of stairs into the open-air space, it becomes something of a sunken oasis, tucked away from the constellation of franchises and subway lines that comprise the neighboring Alexanderplatz. Schultz’s …as heard here by a glass pane is an open cube-like contraption by which a square pane of glass is secured to an opening where a window would have been and affixed to contact speakers with wires that trail down to two small loudspeakers. The speakers make the wind’s vibrations on the glass audible, unsettling hierarchies wherein the visitor is the actor that experiences the space to instead assert the material as an agent itself that is activated via its relationship to place. The ellipsis in the work’s title is also telling, as it fosters a sense of connection to something inaccessible that came before. As the speakers did not record the real-time sound they transmitted (and the sound was also muffled by conversation and nearby traffic when I visited the show), this continually fleeting state heightened the presence of what was not presently accessible, accentuating the historical time that permeates the space but also remains fundamentally ungraspable.

Mirjam Thomann focused particularly on the site’s porosity – time seeped into matter – with the semi-translucent pink salt bricks that comprise her Column, Window, Step. Mined from the mountains of Pakistan, the salt bricks extended the layers of time intermingling in “3 Months Later” to another dimension, as their cubic crystal structure formed millions of years ago. As such, the salt brick concretized, on the one hand, a unit of construction, and on the other, a sign for an almost unfathomable scope of time that reaches far beyond the duration of anything built from it. The simple arrangements – a column of roughly human dimensions, a stack partially filling in a window-like gap in the wall, a layer of milky bricks across one of the long steps – embedded the structure itself into this yoyoing across time by loosely reflecting aspects of its own brick fragmentation. In concert with Schultz’s works, the salt brick installations also function to encourage movement between them around the edges of Klosterruine. I was reminded of Nancy Holt and her iconic Sun Tunnels (1973–76), which are often misconstrued as analogous to the works of peers like Michael Heizer or her husband Robert Smithson, who took the desert as a terra nullius for their massive sculptures. The Sun Tunnels, on the other hand, were crafted according to the sun’s transit while their formal and titular reference to a tunnel also implies a passage. Such emphasis on passage stands counter to fixity and compels repositioning instead. This ethos informed “3 Months Later,” which conceived of passage as an invitation to assume new perspectives. The show suggested that nothing more than attentiveness to one’s surroundings, which the artists coaxed from the visitor with their sculptural interventions, is necessary to tap into the ease of moving between points of view. The embodied experience is never isolated from the fluctuations that surround it. No one is an island: the show’s uncalibrated and destabilized forms served as an ever-timely reminder.

Camila McHugh is a Berlin-based critic and curator from California. She is a regular contributor to Artforum and recently organized a series of two-person exhibitions at June in Berlin.