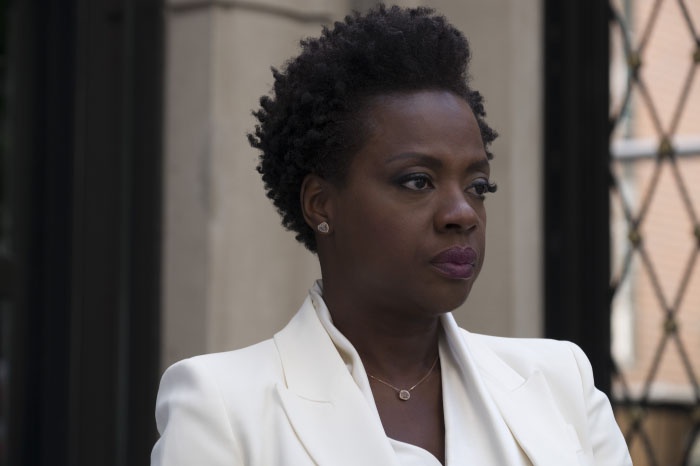 It’s Oscar season, and in anticipation, Texte zur Kunst editor-in-chief, Colin Lang, considers the Hollywood work of a former art world star: Steve McQueen. In his latest opus, Widows, McQueen continues his exploration of the complex, inner life of emotional states, picking up where he left off with 2011’s Shame and 2008’s Hunger. There is a spoiler alert, so those who have not yet seen the film, read at your own risk. What follows is not a review, per se; rather, it is a meditation on what Widows reveals about the challenges we encounter when we are faced with loss.

Steve McQueen’s latest film, Widows, is ostensibly a movie about a heist, one pulled off by four women and with a local election in Chicago and its racist and classist politics serving as its backdrop. This is the scenery, the primary attraction, but the scenery is there to provide a visual drama as a frame for McQueen’s exploration of a particular emotion that cannot otherwise be given visual form: grief. The formula of building a story in order to allow for the complexity and interiority of a guiding sentiment is one that McQueen exploited to great effect in a prior investigation of a different emotional state, shame, in his eponymously titled 2011 tour de force. How many reviewers of Shame failed to figure out that the film was actually about a story that was only briefly referred to, kept at the margins of the visible (McQueen’s greatest strength as a filmmaker being, perhaps, his resistance to the medium’s logic of rendering all that it sees as image, as visible)? Almost all of them, sadly. One critic after another discussed the symptom at the heart of Shame – the protagonist’s compulsive sexual behavior. This compulsion is brought on as a way of repeating and thereby abreacting an originally shameful sexual act between siblings, one which eventually results in the suicide of the sister, and the brother’s continued sex addiction. Perhaps one is tired of beating this horse, but it is worth mentioning again that McQueen is an artist. He’s not an artist who turned into a filmmaker; he’s an artist who makes big-budget films. I say this because McQueen is an artist in the best sense of the word, in the way he makes things appear by not showing them to us directly, subverting the camera’s limited capacities to capture only what is in front of it. Widows is an adapted work, so its carryover as title for the film adaption seems logical enough. But the film could have easily taken a more descriptive, emotive title, like that of McQueen’s first long-form feature, Hunger (2008), or Shame, for that matter. There aren’t many good one-word titles for this film’s true subject: grief; or, something like the pain of losing someone dear to you (is there a difference?). This is what the film is really about and it’s the main catalyst driving McQueen’s latest opus. As with McQueen’s previous work, the relaying of that emotion – the pain of losing someone – is held back, relegated to the white lines of the film, with such incredible subtlety that it bears mentioning here, even if I’m ruining the film and reducing it to a singular reveal by doing so. 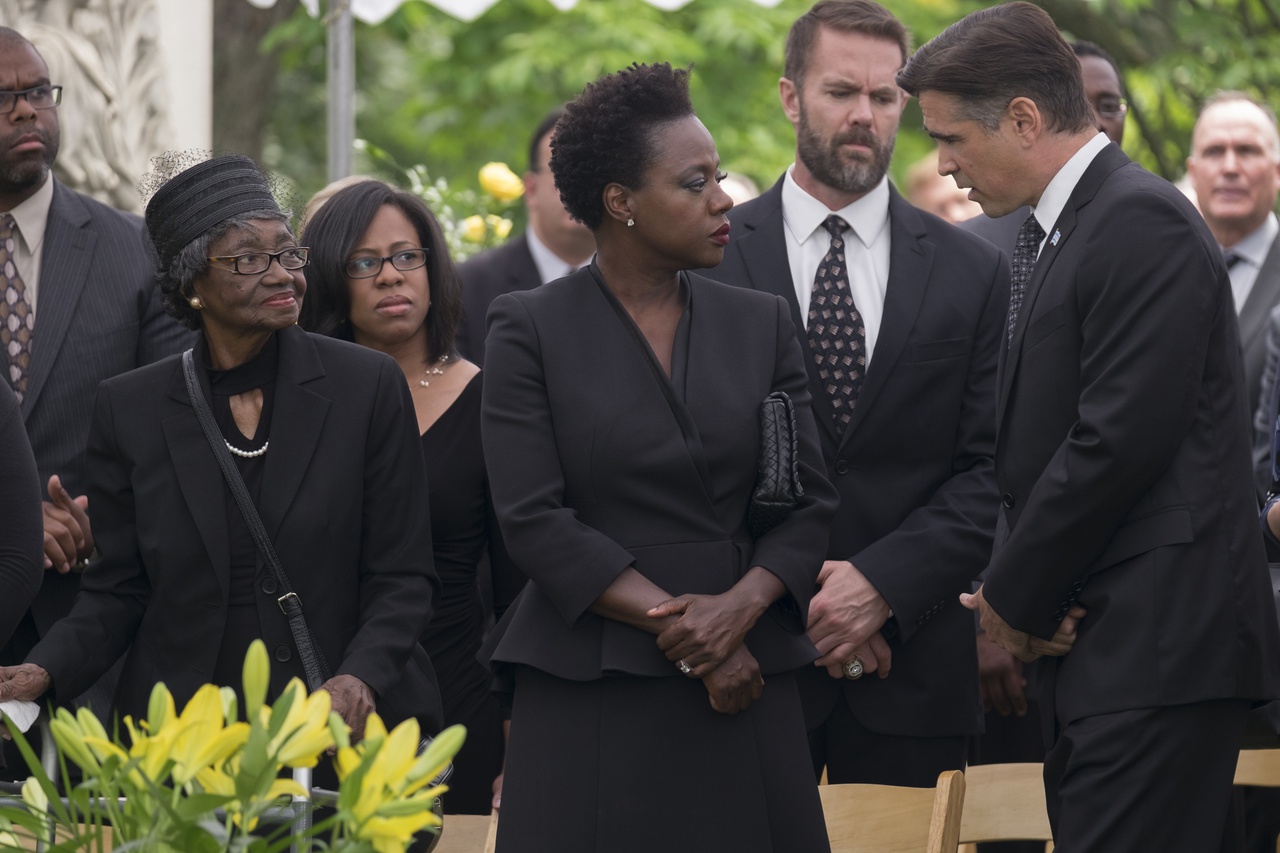 Viola Davis carries the film on her shoulders as Veronica Rawlings, and there’s no getting around the fact that she is the medium through which the film’s exploration of grief is channeled. Her acting is incredible because of what she does not do for over two hours: smile. She does so (smile) very briefly in the opening minutes of the film, but never toward the camera, and the rest of the movie shows us various states of Veronica not smiling, or not being able to smile. In the final scene of the movie, Veronica recognizes Alice (Elizabeth Debicki) – a fellow widow who collaborated in pulling off the heist that is the movie’s central narrative act – sitting in a diner across from her. Veronica’s recognition of Alice is one that is connected to their shared histories of grief (they both lose their husbands in the fiery explosion that opens the film), as well as to their connection as accomplices in the heist that they pull off together in desperation, in order to repay the drug lords who are owed money by their now-deceased spouses. Veronica sees Alice at a crucial juncture in her recovery from the loss of her husband and (we later learn) son, and she seems finally to have been released from the unbearable burden of coping with those losses internally, having previously been incapable of sharing it with others. Veronica follows Alice out to her car, parked in front of the diner, and, while smiling, asks Alice how she’s been. It is at this point that the film ends, its final image composed of a smiling Veronica, her face and all of its musculature lifted in unison, and the white teeth that emerge displayed frontally for the first time in over two hours. We do not see Alice’s reaction to Veronica’s query; the film fades to black before the camera can cut to the ubiquitous reaction shot. As with those who indulged in the over-sexed behavior of the protagonist of Shame, there’s plenty of action and violence to keep one entertained, so that this smile sinks back into the complex internal life from which it emerged. Here, film, that most cherished medium of visualization, is inverted: it is by not seeing a particular emotion on the face of the film’s protagonist that one experiences precisely the impossibility of expressing anything externally, and thus the technical medium analogizes the emotional state of its widow protagonist when she finally releases a smile out into the open, for Alice, and us, to see. Grief is almost impossible to externalize, for in its throes, one becomes a prisoner of the internal cascade of memory and loss that accompany it. Veronica’s face is a study in the layers of fear, loneliness, desperation, and disillusionment that make her character appear almost forbidding to those around her. For so many, and so many in dire circumstances, pain and loss can never be brought to the surface and thereby shared, because the pain that keeps one locked inside themselves seemingly has no end. It is no coincidence that McQueen chose to base his feature in Chicago, a city nearly synonymous with gun violence and the extermination of young lives at its hands; in short, a city where grief is everywhere. This context is crucial to the emotional backdrop of Widows, in the way that it was for Shame, whose final scene finds Brandon (Michael Fassbender) weeping on his knees in front of the demolished Chelsea Piers in New York. Any social organism worth of the name “social” has to take into account the emotional complexity of its characters; its actors and agents. The social that is comprised of individuals may be one in which many of those supposed individuals are unable to smile or reach out to anyone around them. So, what kind of social is possible under such conditions? While there is always room for commonality, its possibilities are not always realizable by all at the same time – grief is practically anathema to commonality. Nurturing grief and working to finally move outside of one’s inner pain is a prerequisite for action, and before there is outrage and resistance, there is often the very private and secret pain that has to be worked through before connecting to others becomes possible – thinkable, even. 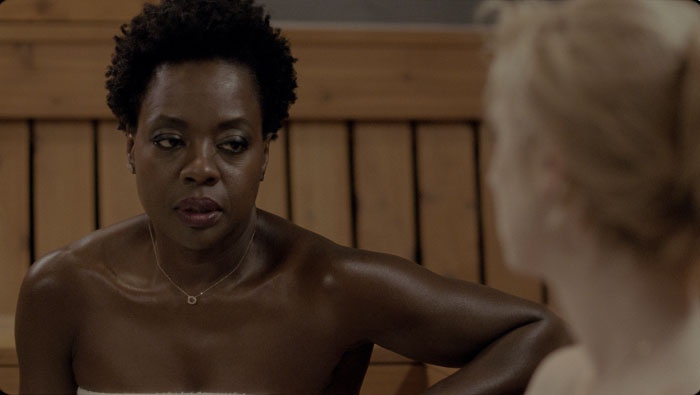 Through a heist, and shootings, and violence, and the savagery of political campaigns, we get back to the matter at hand: the pain of losing a loved one. For Veronica, this means both her son and his father, but primarily her son: the victim of racist police aggression (gun violence, again). Any politics of the personal must begin by acknowledging that what we carry around with us is not what one can always see – a fact that is not so easy to visualize, to bring to life on the screen. Herein lies the subtle art of McQueen’s filmic inversion. By not showing something and then revealing it in the final scene, the visuality of the medium is offset by its temporality: the fact that Widows keeps running, and the emotional restraint builds with every close-up of Veronica’s face. If we could only see what was inside, give visual form to the complex world of the interior, the last bastion of the human (maybe). Film here is an art, then, of accumulation, more than a tool to pictorialize characters and their worlds. In the end, big-budget films, and actors, and an overwrought score by Hans Zimmer, cannot lessen the impact of what McQueen is able to deliver, precisely by holding it back for over two hours. This is McQueen’s art, and for all of the very fraught and terrible things associated with that term, he shows us precisely not just what it is, but what it can do. As the valediction to this great filmic work, we are left not with a diction, but an image – one that is full of hope for solidarity (maybe even community?). In the end, what we have is a formal realization of the challenges many of us face just in being able to smile at someone and ask them how they’re doing, reaching across the lines of grief, which might potentially be shared. As individuals, doesn’t this describe the preconditions for any act of solidarity, of being able to be with others?