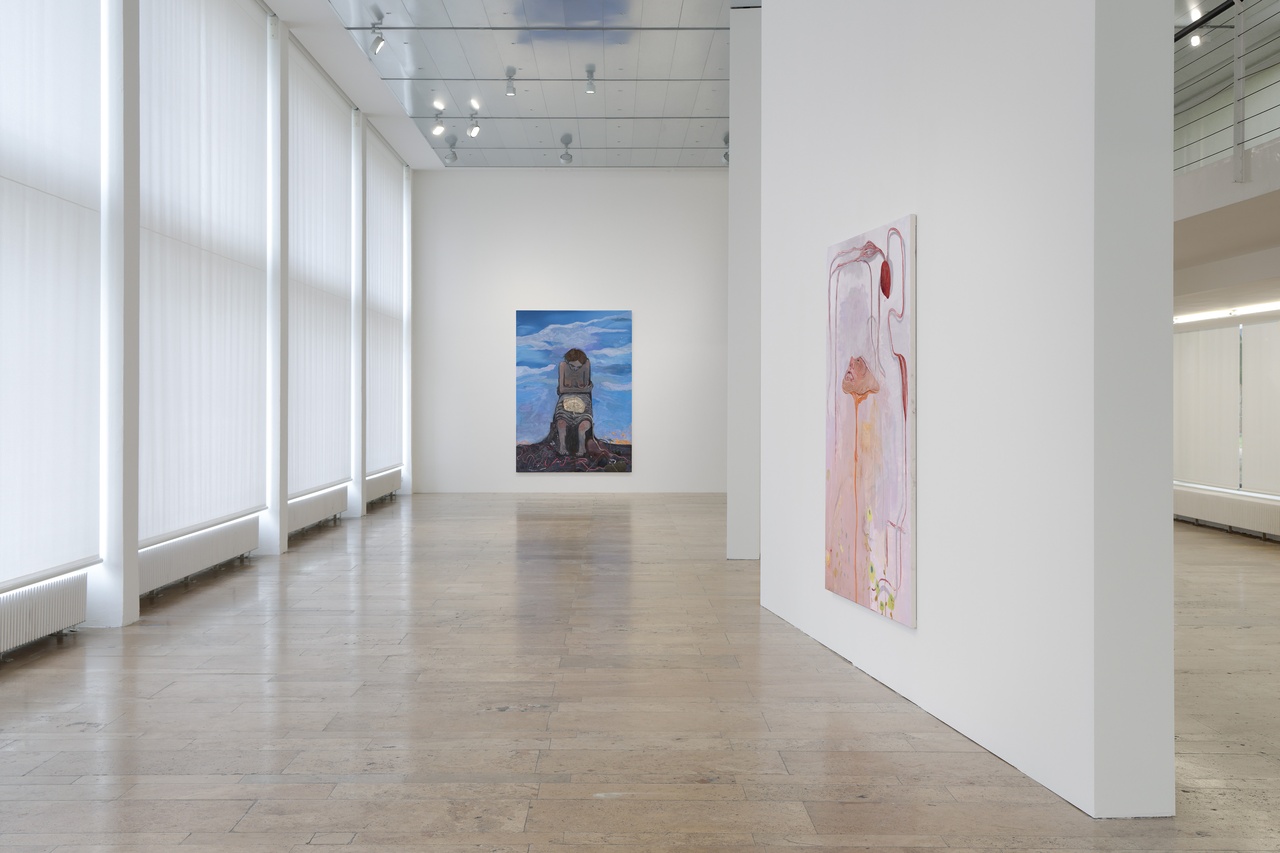 Representations of disfigured bodies, anatomical structures, organs, and stripped bones are proven painterly tropes employed to explore the human condition. Seen within the context of Sanya Kantarovsky’s recent exhibition at Capitain Petzel in Berlin, such motives invite a reading as a visceral reaction to violent conflicts in the present. The artist draws some of these connections himself, but foregrounds the more fundamental, timeless themes that underlie his new body of work. For example, the transience of life. But also, as Louisa Elderton elucidates, the intrinsic human drive to find hope.

If you take away skin and flesh and bones, we’re just organs. If you take away gravity, we’re floating organs, drifting in the landscape: self-connected systems without a center. Such is the scene in Sanya Kantarovsky’s painting Growth (2022), in which a body is portrayed as a deconstructed constellation amid an atmosphere of pink. Linked by networks of red veins, a bright red bulb that could also be a heart or a knotted nodule hovers in the top right-hand corner. An upward-turned face could be a lung or a liver, its gritted teeth attempting a smile while the softened form seemingly struggles – With what? The nature of its own existence? – while connected to the ground with an orange spinal cord. Subtle yellow flowers grow beneath, in an ecosystem where humans and plants are not so different, stamen and petals reaching up for the sun, in the same search for survival. There is a sense of interchangeability: a vein or nerve its own kind of stem. Though the optimism this suggests, of the relationship between people and other organisms, of developmental biology or our ontological relationship to the more-than-human world, is missing here. Rather than a bounteous web of growth, potential, or in-betweenness, the canvas ostensibly proposes something sadder, like a pallid barrenness or an inherent loneliness where nothing ever quite connects. Solitude sways in this image of evolution.

Born in Moscow in 1982, Kantarovsky relocated with his family to Rhode Island when he was ten, a disruptive move that he described in a recent interview as being “a huge rupture, and still the central trauma of my life”. [1] Now living and working in New York, Kantarovsky often plays with the idea of existing between states, or with the limits of the body proposing a sense of burgeoning existential quandary. In fact, all of the figures in “Center,” Kantarovsky’s new suite of paintings exhibited at Capitain Petzel, were clearly in the midst of anguish. Take, for example, the sullen stare of the person in Return (2022), whose breasts, too, gaze in traumatized disbelief at the brain resting in their lap. A sky of tumultuous clouds swirls above; an undulating mass of veins or roots or worms coiled in the earth below – a lone mushroom sprouting next to the stump on which they sit. A return to what, exactly, you may wonder. For me, interpreting the painting in the shadow of the recent changes to abortion law in the United States is unavoidable: the Supreme Court’s decision to overturn Roe v. Wade means that abortion has now been banned in at least ten states and counting – with another four states banning abortion at six weeks of pregnancy. [2] It’s plausible to read this as an allegory for women’s rights: of not being allowed to decide what is best for their futures, to have jurisdiction over their own wombs and fates, to think for themselves; to be people in the world, rather than being bound as child-bearing bodies. A return to no exception for rape or incest. A return to reproductive rights being decided by men. A return to yesterday.

Cue organized religion. Kantarovsky’s canvases include direct references to Christianity, not least in Christian Boy (2022), a small-scale oil-on-linen work that depicts a pimple-faced figure brandishing a crucifix (two thick brushstrokes of the palest yellow) with a glazed expression. Clinging to the cross for any semblance of sense, his fingers are drawn in with the other end of a paintbrush, removing pigment with a hard tip, so that this boy’s grip is also essentially a void of matter – draw your own conclusions about that symbolism; negation as a way of being; emptiness as substance. 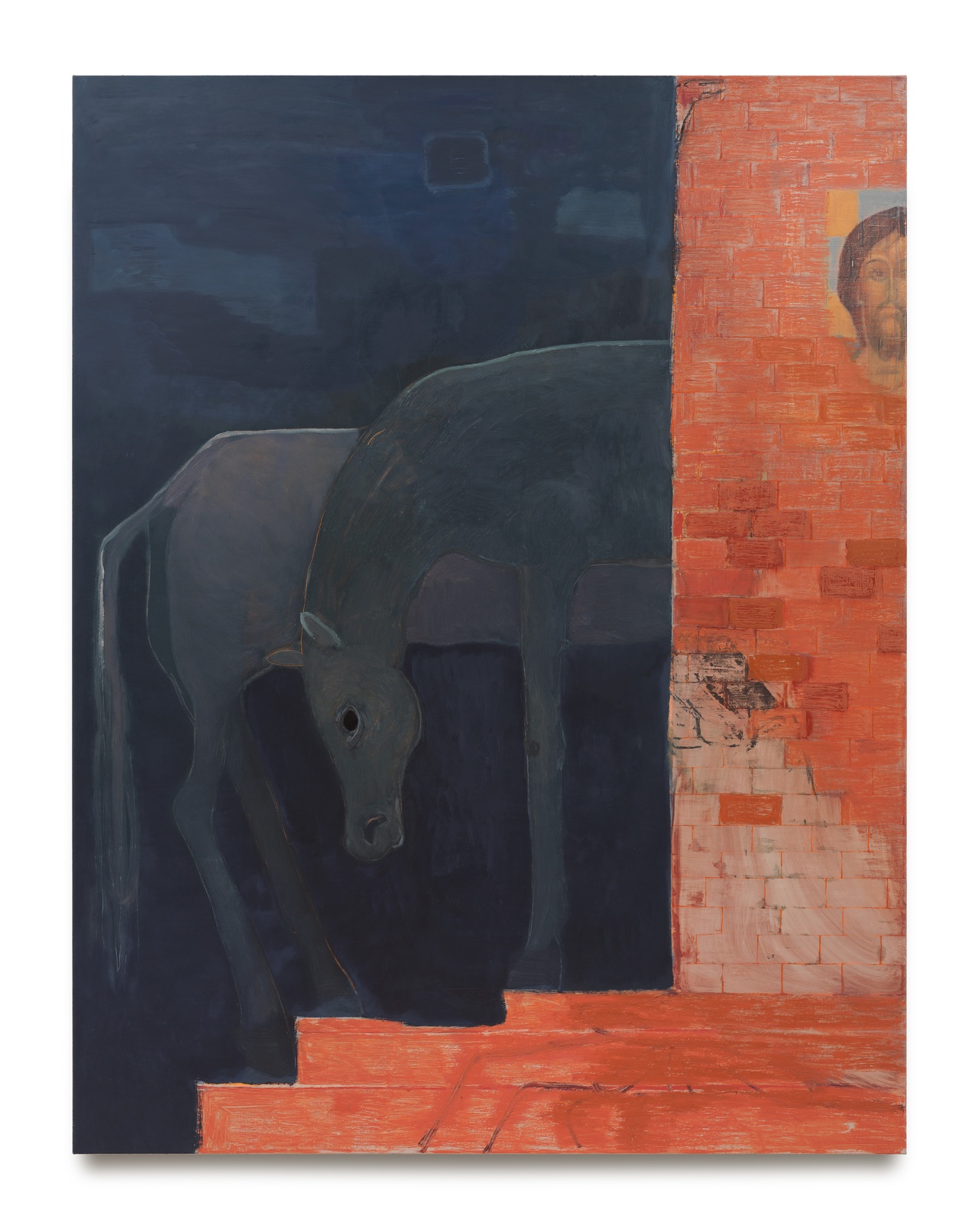 In Completely Blind Red Wall (After Akhmatova) (2022), a face reminiscent of Jesus looks out, resting peacefully upon a red wall. The trace of brick beneath the visage suggests this is the remnant of a fading drawing, etched as its own Shroud of Turin. Two blue horses climb the steps that lead to this barrier: one entering the space behind, and one emerging from it. The work’s title references the elegy “Requiem” by Anna Akhmatova, written about the suffering of people under the Great Purge of 1936–38 in Soviet Russia, when Joseph Stalin sought to solidify his power. She reflects on the arrest of her third husband, Nikolay Punin, and other close confidants. She describes waiting for months outside Leningrad’s prison, demented by suffering, with anguish close to death. Kantarovsky’s painting specifically echoes Akhmatova’s “Epilogue” to the poem:

1.
I have learned how faces fall,
How terror can escape from lowered eyes,
How suffering can etch cruel pages
Of cuneiform-like marks upon the cheeks.
I know how dark or ash-blond strands of hair
Can suddenly turn white. I've learned to recognise
The fading smiles upon submissive lips,
The trembling fear inside a hollow laugh.
That's why I pray not for myself
But all of you who stood there with me
Through fiercest cold and scorching July heat
Under a towering, completely blind red wall. [3]

The “Artist’s Note” at the end of the exhibition’s press release is of importance here, where he addresses the invasion of Ukraine by Russia. He says: “I bear witness to this criminal fratricide, perpetrated by a source of power defined by its contempt for human life, with the thinking, feeling human body forever in its crosshairs. The yoke of this power has always been the curse of my country of birth. Filled with a deep ancestral grief and a sense of civic responsibility, I stand in solidarity with Ukraine.” [4] Kantarovsky’s painting – and genuinely personal statement – reiterates how cycles of cruelty are perpetuated in the grasp for power, and, perhaps, that no amount of prayer seems able to pave a path to solution, or evade the inevitable death tolls, with bodies piled high in the wake of war.

In light of such profound sentiment, works such as Vagus (2022) and Charnal Field (2022), in which gently smiling skeletons merge with fertile lands, depicted with a nod to some kind of shimmering magical realism or fantasy-scape, are out of step, and even feel shallow and tawdry with their cheeky wink at vanitas – or certainly in the face of the other paintings’ more substantial overtones. That said, Kantarovsky is known for his humor, sometimes painting isolated slapstick moments or wry ambiguous narratives of dandy or bohemian people that face sublime boredom. Often denying his human figures a solid sense of subjecthood, his tropes of solitude have sought a mood of sympathy for those gone astray. [5] The difference here, perhaps, is context: the suggestion of life’s inevitable transience, the futility of pleasure, and the certainty of death is weighted with the most awful significance when connected to the Russo-Ukrainian War. And any auxiliary proposition of the enchanting, supernatural potential of painting falls decidedly flat in the sober light of such real-world humanitarian crises. 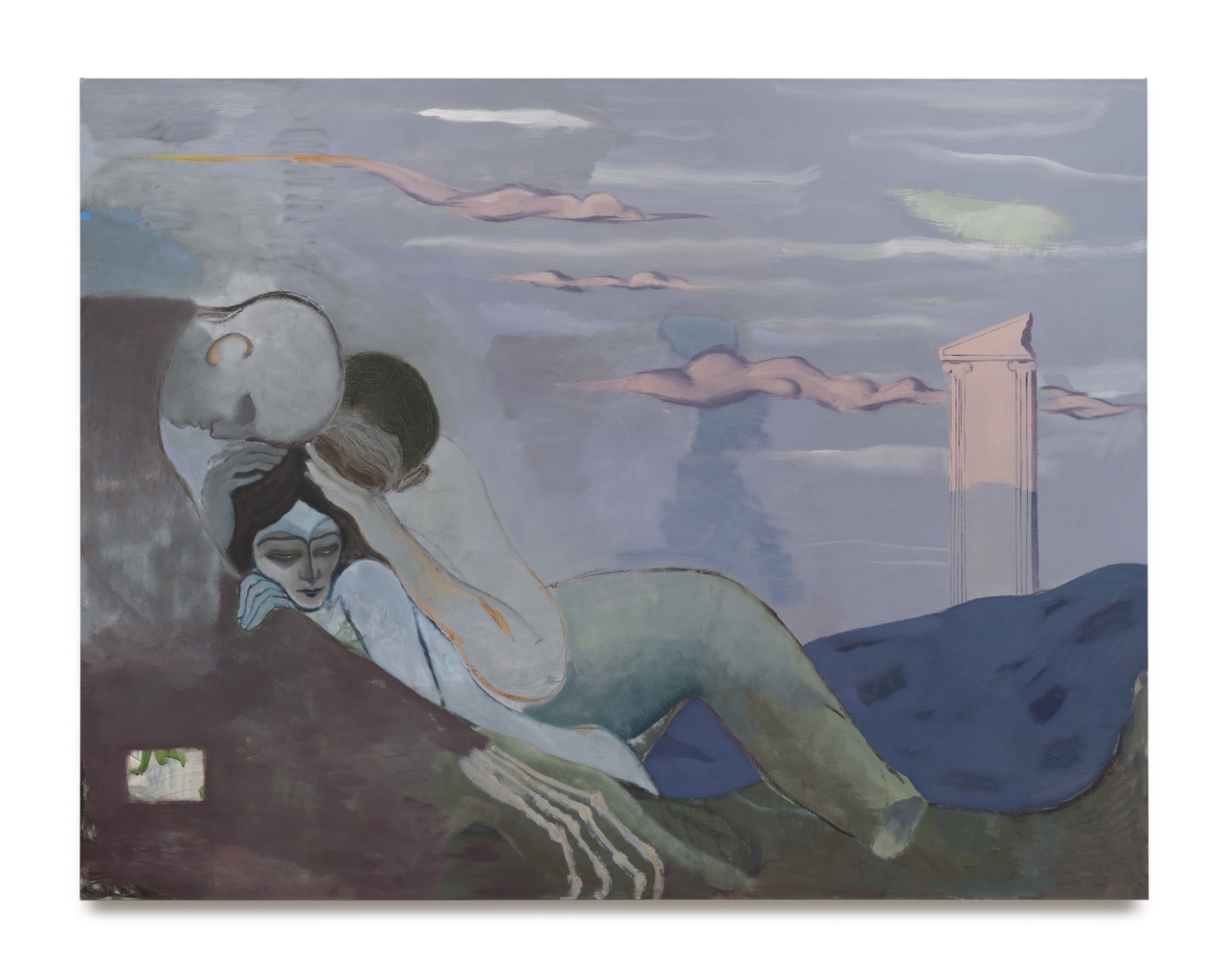 In a 2016 interview with Allison Katz, Kantarovsky cites his interest in Vincent Van Gogh’s painting Prisoners Exercising (1890): in the human “exitlessness” of these men, marching around and around, completely walled in by bricks, mortar, and their own hopeless condition. [6] Indeed, the influence of other avant-garde painters pepper the works in “Center,” such as Giorgio de Chirico’s dreamlike, metaphysical world meeting the mood of Picasso’s Blue Period in Spirits (2022). Here, the classical columns of civilization crumble into the sea, bordered by mottled, ghoulish figures. The key to this work, unlike Van Gogh’s painting, however, is the small, rectangular window (shaped like a miniature meta-canvas within this canvas) in the bottom left-hand corner; a hole in the cloak of what seems to be death personified. With this, Kantarovsky offers even the tiniest of cracks, letting in some light, or showing a route through to something that lies beyond, if you look hard enough. A means of escape. I don’t think Kantarovsky means this in the Frankfurt School or Marcusian sense – art itself as a tool for liberation – but maybe more in the spirit that someone like Charles Bukowski meant it in his poem “The Laughing Heart”: that we are the center of our own existences, and as impermanent as life is, there is light somewhere, and we can subvert the weight of “dank submission” [7] if we watch and then move with careful consideration:

you can’t beat death but
you can beat death in life, sometimes.
and the more often you learn to do it,
the more light there will be. [8]

Despite the hollow eyes and lonesome looks that populate Kantarovsky’s new works, we see slivers of watchful brightness too: the mushroom that bursts through in Return and the sun sparks dancing on the horizon; in the boy’s bright yellow hand in Pumpkin (2022), where he has surely been secretly scooping out the fruit; or the pastel pink, blue, orange, and green organs in the eponymous Center (2022), in which these shapes seem enlivened and buoyant, despite the sad yellow moon face above. It is these subtleties, these sleights of hand that constitute Kantarovsky’s folds in space. They carry the paintings and make you want to peer deeper into the chasm that art can open up beyond the everyday, past what we already know. Perhaps there is a light somewhere, sometimes – small moments that matter – and there is a shared human drive to find it.

Louisa Elderton is a writer, editor, and art critic based in Berlin and is the chief editor of Side Magazine for Bergen Assembly 2022.