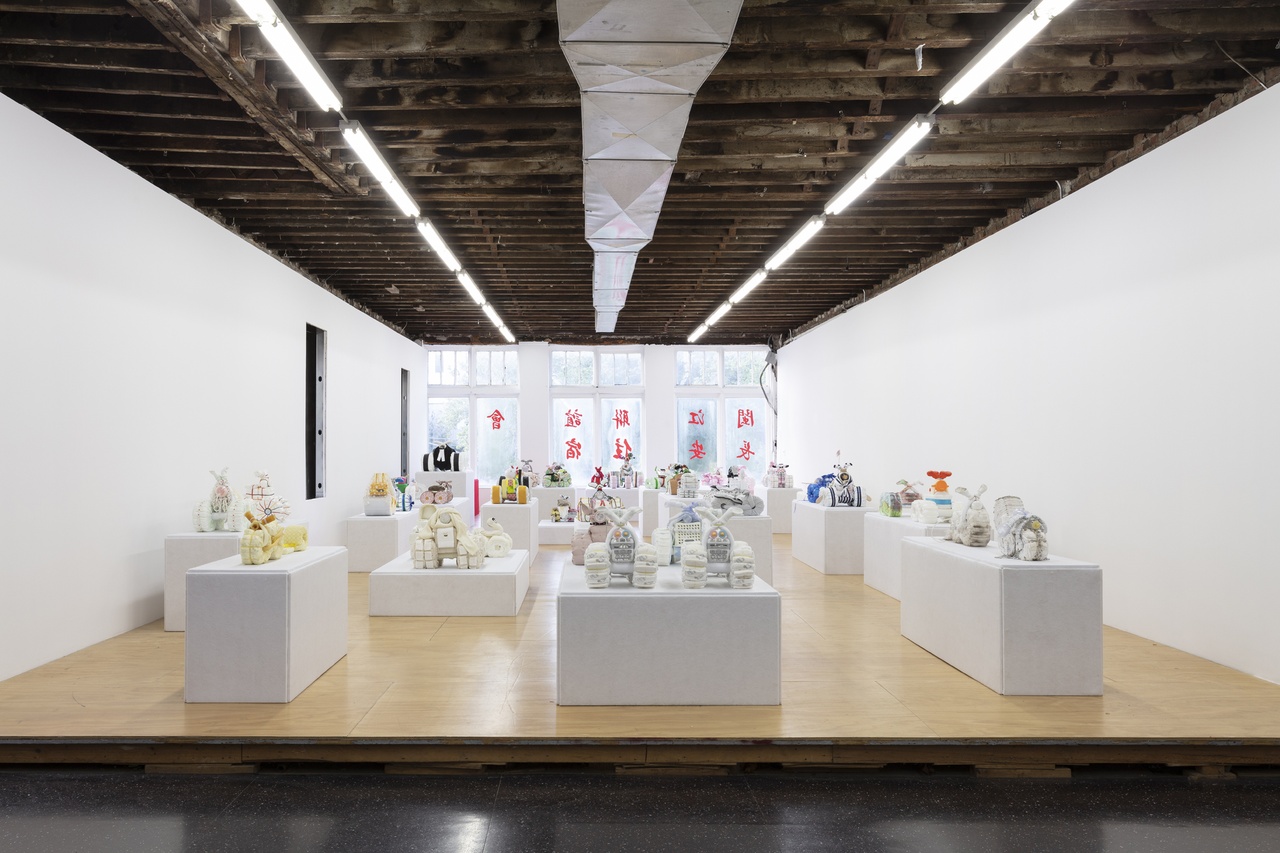 While it might appear outdated or dowdy today, for many baby showers in the second half of the 20th century, a certain handmade gift could not be missing: a cake, visually resembling the style of wedding cakes, made from diapers, toys, and other products for infants – combining, in a somewhat cutesy manner, the ultimate hallmarks of the idealized nuclear family: marriage, reproduction, and consumption. Under its Dutch word, “pampertaart,” the artist Marc Kokopeli translates this tradition into sculptures of cars and other vehicles. Not only do they, as Pujan Karambeigi and Pierre Schwarzer argue, take viewers on a tour of their alleged pre-oedpical fixations, they also update Pop Art’s questions around consumer culture and serial production by both moving beyond anti-gestural obsession and replacing the nostalgia for a standardized mass-production with infinite possibilities for customization.

What kind of quality are we dealing with if an object makes it that hard to resist the pleasure of attachment? Now think of the 59 vehicles made of diapers, fabrics, baby toys, and other standardized commercial objects, placed in small groupings on felt-covered plinths of different heights that you will encounter in Marc Kokopeli’s exhibition “die Pampertaarten” at Reena Spaulings. Navigating the abundance of toy-sized motorcycles, cars and quads, wandering through narrow aisles with their sprinkle of luxury, the lush staging of a middle-class commodity culture, might make you reminisce about a Macy’s in the early 1960s, when the national expansion of tight department store corridors was crowning the post-war consumer boom, mirroring the promise of infinite accumulation that appeared to be cemented into the future.

And then some viewers might remember the textbook readings on this moment, when artists ventured into consumer culture and Roy Lichtenstein summarized this ambition with only a slight confusion of the terms: “I am not against industrialization, but it must leave me something to do.” [1] At that point, US artists had been dealing with a kind of (spiritual) unemployment for some time, and what is now codified as Pop Art’s innovation was to abandon the revelry of this status and instead seek employment in the culture industries.

Lichtenstein’s own employment strategy consisted in the production of so-called handmade readymades, combining drawings, mechanically reproduced comics, and hand-tracings. [2] The originality of this work was to compress a set of seemingly insolvable contradictions (high and low, painting and advertisement, originality and copy, emotional effect and detached scanning, critique and affirmation) onto the flat surface. The ambitious job then was to become a composer of consumer culture in order to soften and sharpen its edges all at once, to create a new unity, leaning into the highly complex endeavor that undergirds the production of the banal.

As much as Kokopeli’s 59 diaper-vehicle sculptures have this air of the “handmade readymade,” both in their name (Pampertaarten can literally be translated as “diaper-cakes,” the Dutch characterization of handmade maternity gifts made of diapers) and in their production process (standardized industrial products for the infant state, such as diapers, assembled by hand in a tedious exhaustion of human labor), they propose a slightly different, even if adjacent, (re)employment strategy for artists: sculptural figurations to create metaphorical reference chains that are supposed to build an identificatory bond between work and viewer as between product and consumer.

Barrister (2020), the lawyer that usually makes a case in front of a jury, greets you at the gallery entrance as the largest of the vehicles, standing on its own plinth. Like most of the other sculptures, its ears are made of baby socks, whereas black ribbons adorn the padded wheels, seemingly suggesting that it is not the feet that are in charge of movement but the containers used to capture excrements. And with this, all signifiers appear to take on an intimate connection to feces: The engine dressed in a robe, the nursing bottle as its face, covered with a tiny white wig, a gavel on its back. If anality in psychoanalytic terms designates obstinacy, control, and the pleasure of withholding, is the barrister then making a case for judgement as freedom from our enjoyment? 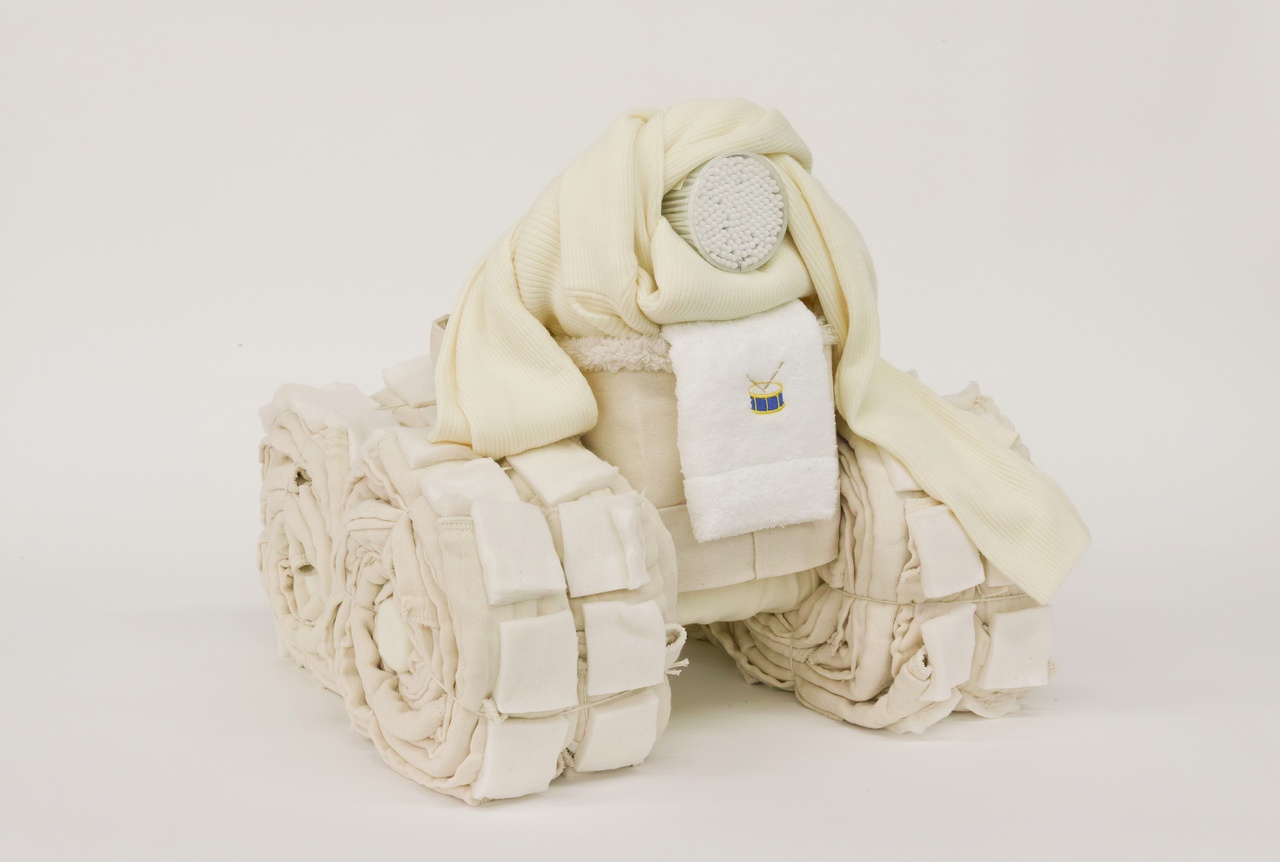 Where anality supplies the wheels of these sculptures, standing in for what psychoanalysts call the drive, it is closely followed by orality: plastic mouths, milk bottles, and other nipply protrusions grafted onto empty plastic baskets a few feet away, or flipped into cages where the engines of these vehicles would normally be. Indeed, the way metaphor is at work in these “handmade readymades” is less about the contradictions Lichtenstein had put on display and closer to the works of one of his peers, namely Claes Oldenburg’s soft sculptures, like the 1966 Soft Toilet. At the time, Oldenburg’s works went one step further in turning sculptures both into figurations and operators of desire, media at once imaging and triggering, ultimately prying open the depth of subjectivity rather than flattening it. This becomes clearer when realizing that each plinth in “die Pampertaarten” functions like a grouping, a family portrait, an oedipal scenery.

Take Muji (2022), Bassinet (2020), and Gaze (2020). Bassinet, a miniature crib with a translucent silk ribbon upon waffle-patterned cotton, is placed behind the beige organic-linen-diapered Muji, which wears a bib adorned with a drum, and carries pens from the eponymous Japanese housewares store in a tiny basket in the back. In between the two figures is the child-like Gaze, a shiny metal orb with arms upon its diapered wheels, with a ribbon of fabric where eyes would be positioned. The point here is not just that various readings of family values are put on a pedestal (mother, father, child; production, reproduction, product; pregnancy, labor, rearing; love, hate, alienation, etc.) but that it invites you to choose the configuration that you find yourself identifying with. The question then is really a series of whys: Why do you find yourself attaching to a specific vehicle-sculpture? Why is Safety Pin (2022) reminding you of how you like when it hurts but stays at the surface? Or is it the one with Concrete (2020) and Steamroller (2020) because your urge to clean gets you so dirty?

The ambition here is akin to that of the project of one of Freud’s earliest female disciples. Melanie Klein’s famous play analysis used mass-produced toys to have children act out their pathologies: “Full analytic results can only be obtained if we bring these play-elements into their true relation with the child’s sense of guilt by interpreting them down to the smallest detail.” [3] If read correctly by a professional psychoanalyst, the accounting for each and every difference in the interaction with generic objects could render the unconscious visible. In this way, playing with generic toys was supposed to do for children what dreamwork did for adults. 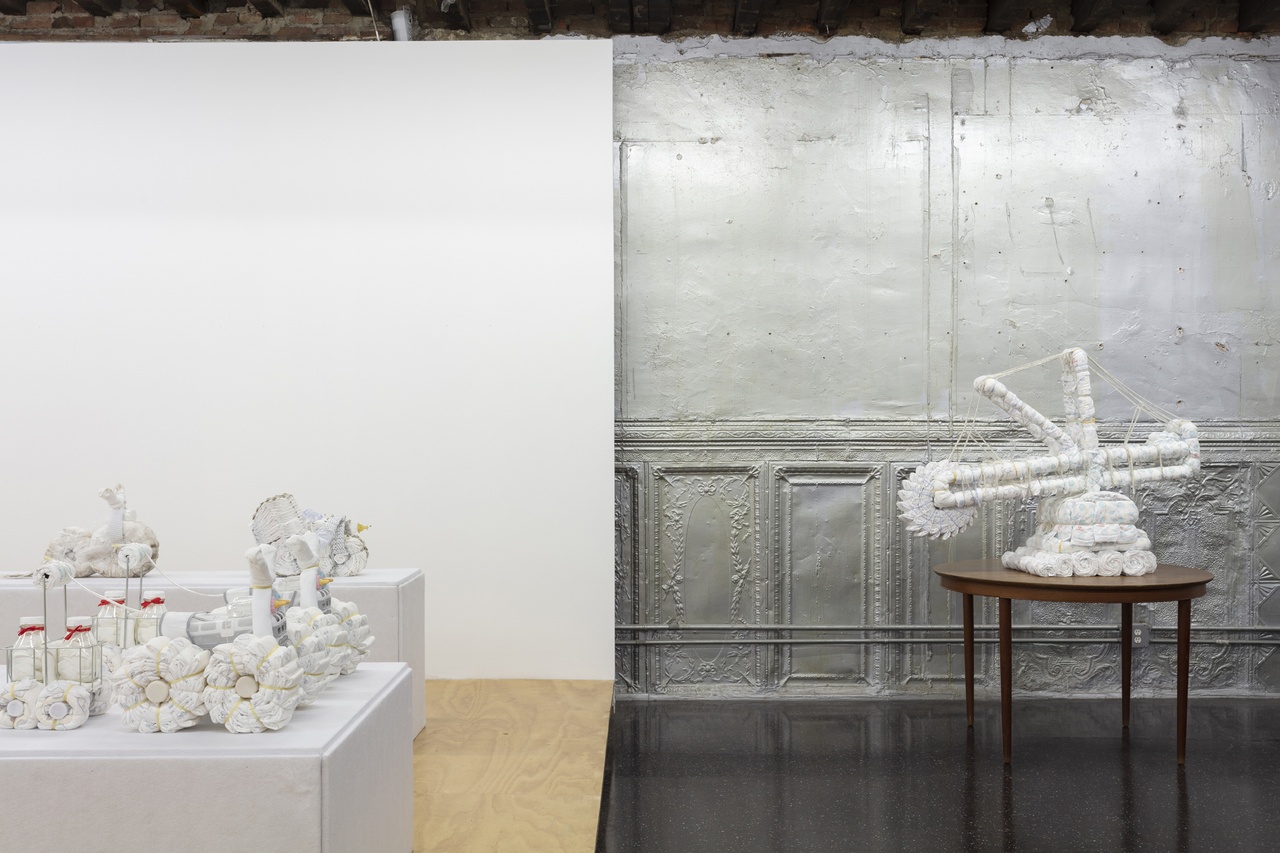 In “die Pampertaarten,” children are replaced with adults, the industrially produced with “handmade readymades,” and Klein’s analyst with a gallery assistant at the front desk, the silent and seemingly embarrassed witness of your attachment to one of these scenes of rearing. The handmade customization operates here on several levels: Psychoanalytically, it could be understood to alleviate the charges by Klein’s critics that her method is overly schematic and too preoccupied with an originary wholeness of the maternal figure. Move an inch beyond simple standardization, give us just enough individuality to feel seen, and the ever-same pattern of diaper-wheeled vehicles will get to do their work, whether that means fostering mastery over one’s neurosis or relaying its obsessive fixation.

Similarly, the generic quality of the art historical references, the deliberate shelving of these sculptures within the October-textbook readings of canonical Western 20th-century art, must be understood as a delicate balancing act: at every turn the sculptures risk redundancy, the repetition of the obsolete, the rehearsal of discussions that seemed to have been settled a long time ago, the infatuation of New York art with New York art. That is also to say that “die Pampertaarten” manages the balancing act, moving one step beyond Lichtenstein.

The guide here is Braunkohletageabbau (2020), a diaper crane, titled after one of those frightening German composite words (brown coal opencast mine), placed somewhat outside of the center of attention, in the liminal zone between the couch and the stage. The artist is being promoted to a proud miner of the consciousness industries, where our desires are molded and our wishes dressed up and voiced for us. No more dreamwork, no more professionalized labor of the psychoanalyst, just eternal silence between you and these art-toys you do not get to play with, their blind stares observing your feeble attempts to crack the code.

Pujan Karambeigi is doing a PhD at Columbia University where he is working on the history of realism in member states of the Non-Aligned Movement. He is an editorial contributor at Jacobin magazine and regularly writes art criticism.

Pierre Schwarzer is a PhD candidate in French thought at New York University. His research focuses on the history of psychoanalysis, technology, and automation.