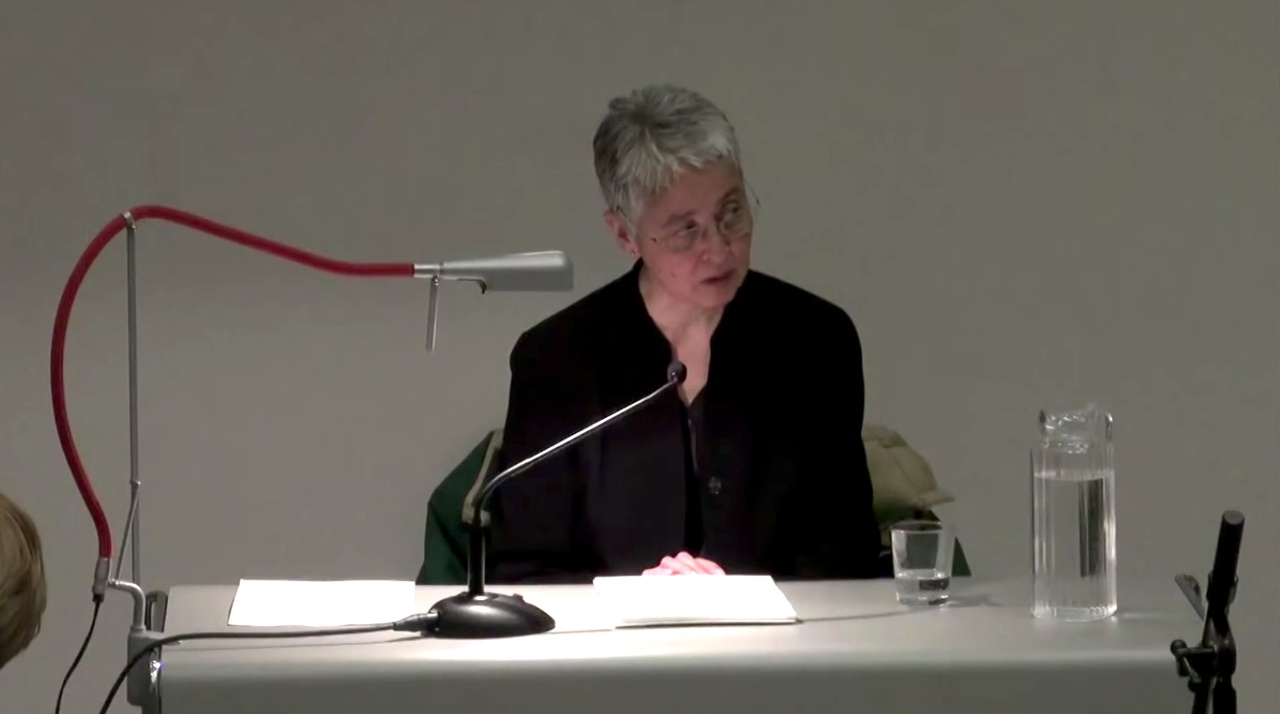 Adrian Piper, “Second Wave Feminism: Unfinished Business,” lecture delivered to the National Academy of Art, Oslo, 2014
The open letter has long been utilized as a form for airing grievances in the art world, initiating and intensifying discussions on art's imbrication in dominant sociopolitical conditions and positioning art against those conditions. As we look forward to our December issue on collectivity, we are sharing writer Tom Hastings's 2016 text on open letters and artistic authorship. As Hastings argues, whether it is the individual or the collective who takes a stand, those undersigned publicly consolidate an authorial voice that must, intentionally or not, double back on the value of what they as artists do, and how they do it. The open-letter format maximizes distribution; effect all but guaranteed.

Of the many ways artists have sought to intervene into conversations that surround what they do, the open letter – here understood in the expanded sense of a public address – is perhaps the most Janus-faced. Part artist’s statement, part (wo)manifesto, part blogpost, the open letter is a making-public that seeks to call out or simply comment on the machinations of the art world. Historically, public address has functioned both as a way for the individual artist to question the conditions that organize her or his passage, and as means for the collective to concretize interminable discussion into an actionable list. One might think here of Sharon Hayes’s soapbox love letters, W.A.G.E’s letter to New York’s New Museum (released this May, demanding remuneration for “the artists who supply the content of your programs each year”) [1] or the anonymous artists’ response to the Volksbühne debate (recently published on this journal’s site). Whether it is the individual or the collective who takes a stand, those undersigned publicly consolidate an authorial voice that must, intentionally or not (it doesn’t matter), double back on the value of what they as artists do, and how they do it. The open-letter format maximizes distribution; effect all but guaranteed.

But this increasingly popular strategy raises a key question: If the open letter enables the artist to confront issues of authorship and its supporting institutions with a measure of directness, how can an artist publish one without inviting suspicion that she or he is also, and perhaps even primarily, using this ostensibly non-artwork open-access form to air her or his artist-profile by other means?

An interesting example can be found in Adrian Piper’s recent declaration [2] that she will no longer add her voice to the critical commentary on her artistic practice, reasoning: “That I had asserted P was taken to be a statement about me, rather than about P.” The statement’s title, “Why I’m not talking about my artwork,” defensively checks the artist’s complicity with the art press’ tendency to read and leverage artistic subjectivity in the course of analyzing artworks. With this critique, the many audiences of Piper – a lionized, late-career artist – are clued in to the processes by which an artist’s utterances and gestures are fashioned into an intrigue surrounding her or his life story, and around which, in turn, artworks link to form an incontestable halo. 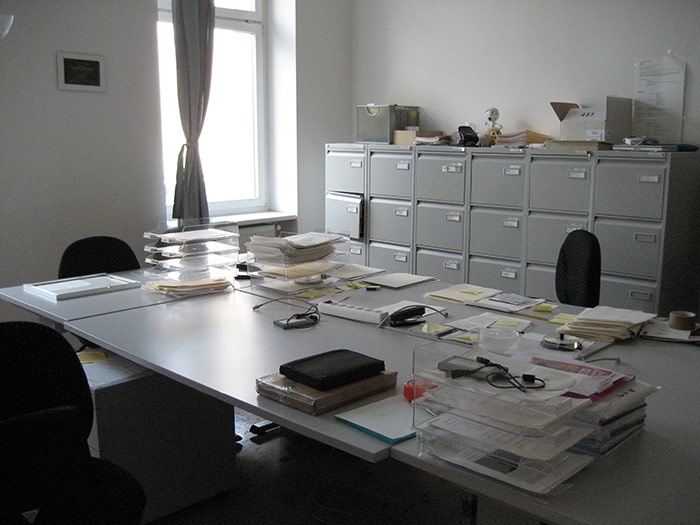 Reading her statement, one might note that it rings of late-’60s Conceptualism, Piper employing an analytical formulation that recalls her early interventions into a set of art world discourses, propagated in the main by Joseph Kosuth. The designation “P” here functions as a second-order motif – one that references the author’s own early production even as it simultaneously marks her disengagement from self-authored commentary on her practice at large. The writer’s voice is synchronized with the artist’s timeline at the point of withdrawal. P reaches the reader in the form P1 (Piper on Piper), wherein the refusal to contribute to the discourse around her practice is proposed in terms that are, if not self-referential, at least evocative of its reservoir of signs. To be clear: this is an effect of the above-quoted statement; it is not merely a product of the author’s intentions.

One could argue that when the artist attempts to influence public opinion through a mode of publicity that is deeply committed to notions of the public sphere and the individual, she does so as a social subject first, and as an artist second; that in the act of summoning a hearing, she or he is dispossessed of a scripted persona and afforded the right to be taken seriously. But as Piper’s statement attests – “I in effect mediated that relationship through my discourse about it, thus undermining the ability of viewers to enter into it” – it is the artist who is interpolated by the reader, and never so acutely as when her status as artist is under threat or in question.

Consider a counterexample, one in which a surfeit of good criticism is precisely what the circumstances require. In 2011, Yvonne Rainer wrote an open letter to Jeffrey Deitch, then director of the Museum of Contemporary Art, Los Angeles, decrying a performance, orchestrated by Marina Abramovic, that was to be held over the course of a donors’ gala dinner. “It has come to my attention,” wrote Rainer, after having been informed by a renegade auditionee, “that a number of young people will be ensconced under the diners’ tables on lazy Susans and also be required to display their nude bodies under fake skeletons.” [3] Rainer’s disgust over a performance situation in which young artists, in search of a break by any means, have been asked to remain immobile for a period of three hours while their protruding heads steadily rotate through an arrangement of dining table glory holes, when it cannot be promised that donors won’t try to touch, feed or insult them, is buttressed by the cool fact that they are prospectively being paid $150 for two days’ work. Rainer’s letter treats Abramovic’s entertainment symptomatically, as indicative of the generally exploitative working conditions that undergird the art world’s uppermost tiers, predicated as they are – in Marxian terms – on a ramping up of absolute surplus value. Consequently, this letter would seem to level a criticism with a degree of impartiality, thereby squaring the artist’s address as public opinion. 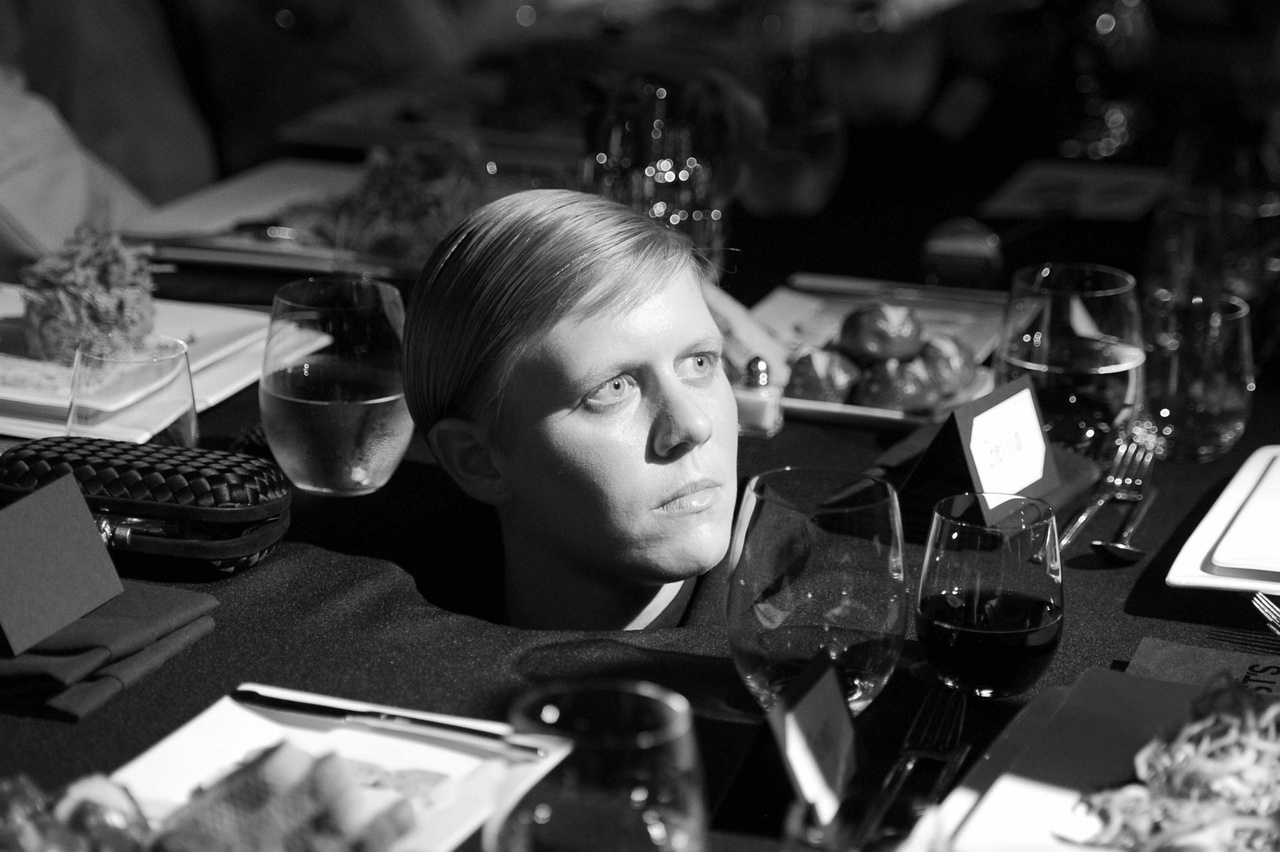 While making the point that her denunciation is “not a critique of Abramovic’s work in general,” Rainer does, however, offer the following critical elaboration on the work itself, in terms that are less customary:

This description is reminiscent of “Salo,” Pasolini’s controversial film of 1975 that dealt with sadism and sexual abuse of a group of adolescents at the hands of a bunch of post-war fascists. Reluctant as I am to dignify Abramovic by mentioning Pasolini in the same breath, the latter at least had a socially credible justification tied to the cause of anti-fascism. Abramovic and MOCA have no such credibility, only a flimsy personal rationale about eye contact. [4]

While this passage is surely representative of Rainer’s precise yet idiosyncratic patterns of speech and writing, it differs from Piper’s statement in two interlocking ways. First, the letter is undersigned by over fifty supporting parties, ranging from close allies like Douglas Crimp, to less-immediate contemporaries such as Su Friedrich to committed art historians of a younger generation like Liz Kotz. Though this, in itself, does not evidence “public” opinion, it does indicate the message has been carried beyond the sanctum of the artist’s practice. Second, and more importantly, Rainer’s elaboration imbricates the work in a discursive tangle that situates the art world against dominant social conditions: For the mention of “Salo” invokes, via the figure of the Marquis de Sade, Adorno and Horkheimer’s “culture industry” thesis and their joint analysis of entertainment as a primary site for the extraction of value from bodies under capitalism, which in turn indicts Abramovic and MOCA’s lack of credibility along an axis that renders those schooled in such references somehow complicit too. Rainer’s elaboration on Abramovic’s entertainment is effectively a public gesture, then, insofar as it points to the social limits of criticism in the process of making criticism.

These two, quite separate intimations of audience networks in the public domain withstanding, Rainer does concede a “flimsy rationale about eye contact” as a positive remainder of the Abramovic x MOCA spectacle, albeit one that curiously ushers in her own performance histories with the criticism’s punch line. Note that “eye contact” has posed a theoretical and practical problem throughout Rainer’s career, as those familiar with her work will no doubt be aware. The difference in relation to the referentiality of Piper’s statement, I want to argue in closing, involves the positioning of voice.

To recapitulate, Piper deploys a dominant trope of her artistic practice in order to explain a shift away from self-reflexive commentary. Thus, the substitution “P” leads to the undesired – or so the reader is led to believe – effect, of further entrenching the vocabulary of Piper’s practice into a transposable rhetorical position; into the very terms that would otherwise redeem it in the eyes of the artist. Rainer, on the other hand, takes a problem of her own practice and characterizes it as an aesthetic strategy which, open to all, is more or less interesting depending on how it is deployed and in which context, (and it could be argued that any self-referentiality related to eye contact is in this instance subsumed by the monopoly of Abramovic’s “The Artist is Present,” here served on a silver platter.) It is almost because Rainer and Abramovic are such recalcitrant peers that whatever problems emerge in the interval between their respective practices must automatically be deferred to public opinion for impartial assessment.

Accordingly, Rainer’s letter tasks the art world with a duty to pass judgment even as it levies a charge; meanwhile, Piper’s statement passes the mantle to her reader, who is simultaneously held in abeyance. By saying this, I do not intend to play these artists against one another; to interrogate one’s credibility and to sanctify that of the other. Rather, I simply mean to point out that it is interesting how public address works with and against an individual artist’s stated intentions, in a way that, if understood correctly, may teach us something about the social basis of artistic production.

Tom Hastings is a London–based writer and lecturer in dance at the University of Roehampton and The Place, London.